Industry 4.0 is now the norm for erfi 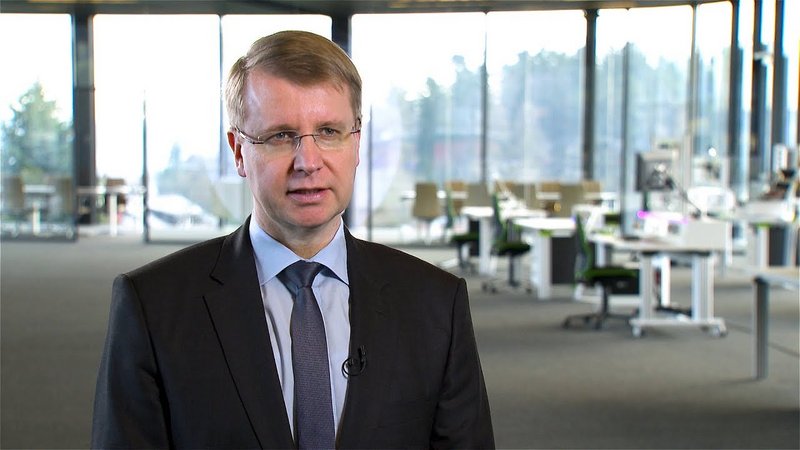 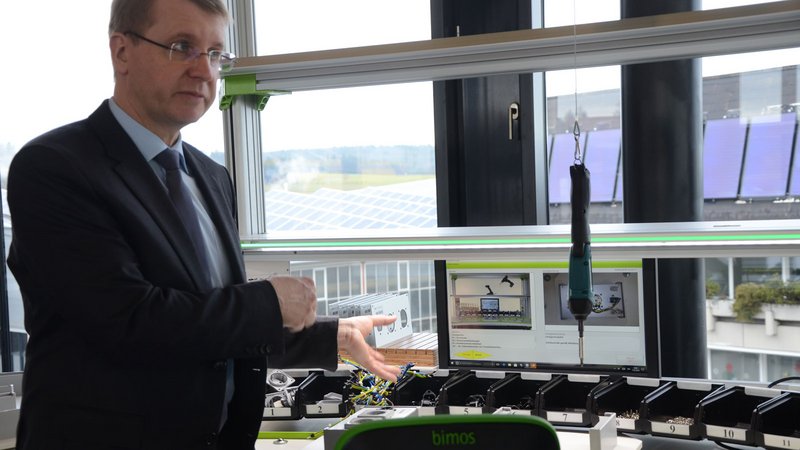 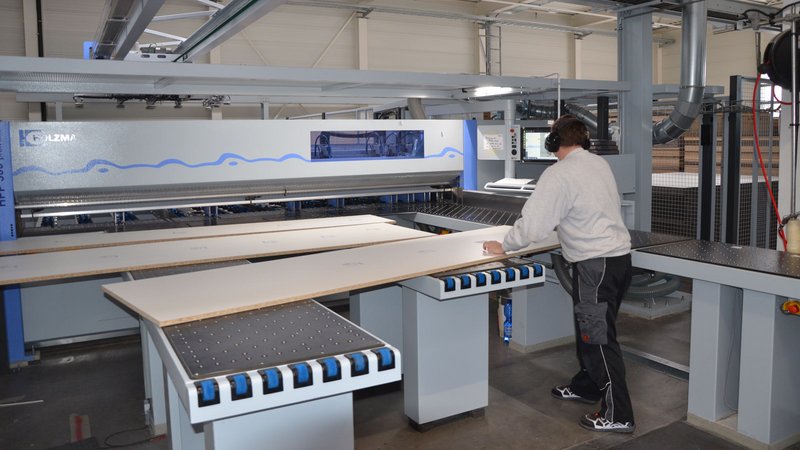 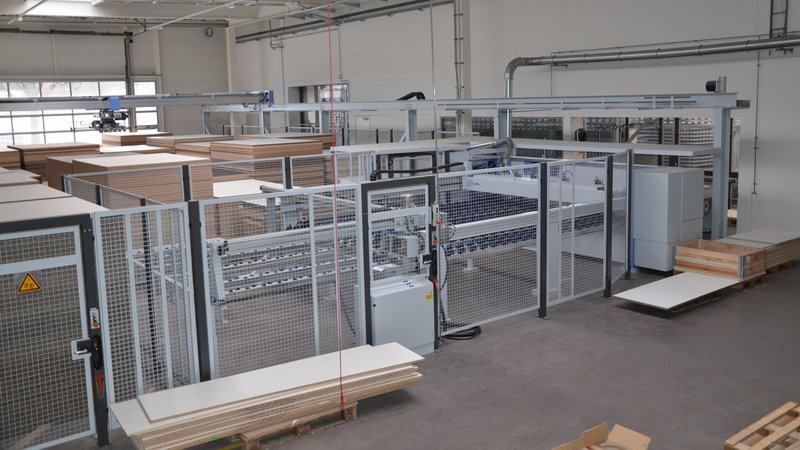 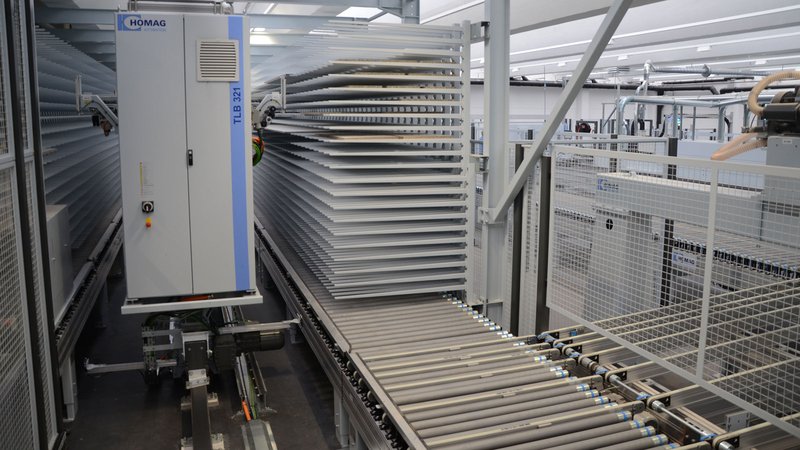 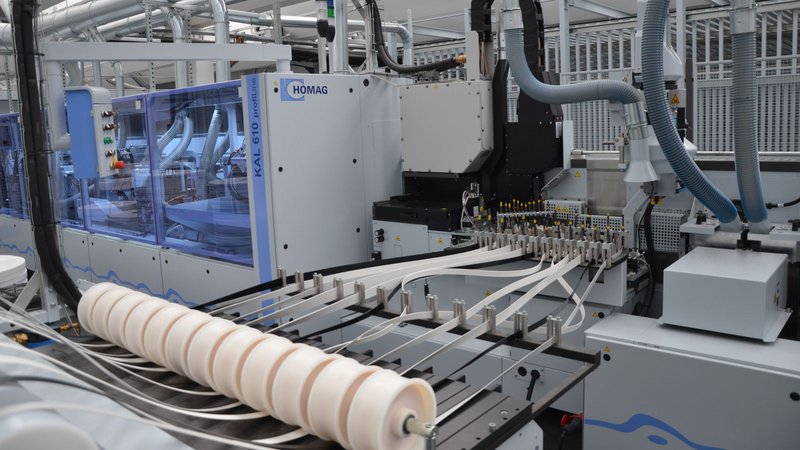 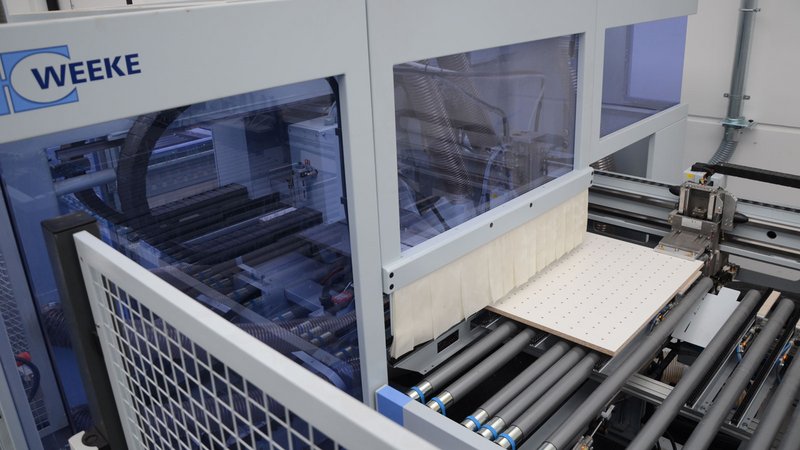 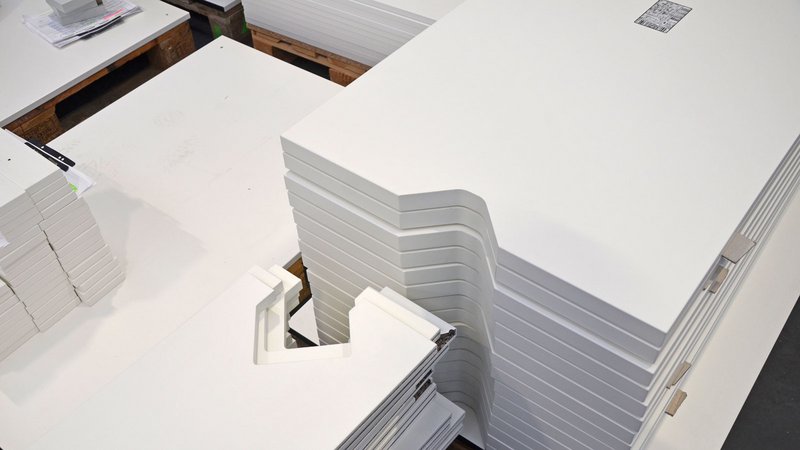 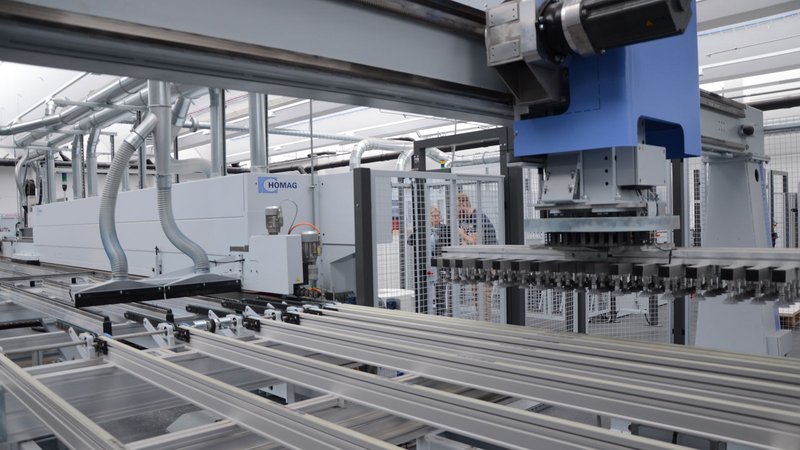 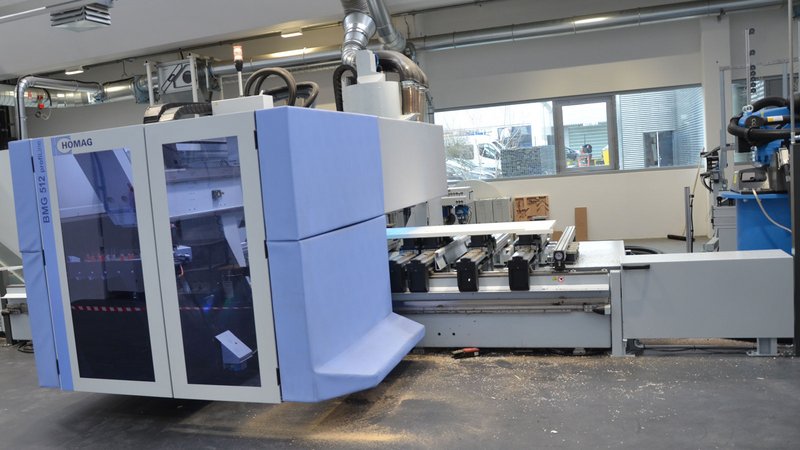 Andreas Fischer, junior manager and son of Ernst Fischer, at an assembly station: "Our electronic laboratory tables have started a real revolution".

The TLF 411 storage system is located in a separate hall.

The TLB 321 sorting buffer is placed between the cutting and the edge banding.

The laser unit can process twelve different edges with automatic changes and no manual intervention.

All rectangular parts with no free-form processing are fed directly to the BHX 560 Optimat for drilling and trimming in throughfeed.

Standard at Erfi: Complex cut-outs which are completely edged are required for the table legs (aluminum profiles).

The parts with free-form processing go to the CNC cell with robot management.

The heart of the CNC cell is the BMG 512 profiLine processing center. This has a modular design and was configured in accordance with customer wishes.

We can already say now, that we exceeded the productivity of the old system quite quickly and now things are really taking off. We expect to be able to produce at least twice if not three times as much as before with the considerable reduction in staff expenditure.

An article from the specialist magazine HK, 01/2018 Image source: HK magazine. Here you can read the article on hk-magazin.com.

The original intention was simply to replace the edge banding machine and install new software. But even as early as the planning phase, it became clear that more was required. Those responsible at Ernst Fischer GmbH (erfi) therefore decided on the complete solution. Now, all wooden parts for the work tables and cabinets at the electronics specialist in Freudenstadt will be produced on an automated production line from HOMAG. The system fulfills all the criteria of Industry 4.0 and will also soon be "tapio ready."

"We had to do something," says Andreas Fischer, the junior manager at erfi, describing the situation of his wood production with manually operated joinery machines. "We were no longer able to meet market requirements economically, given the multitude of variants and the production of batch size 1 up to large series." The manufacturer of electronic laboratory equipment, assembly stations, measuring and testing devices, and test systems implemented the advice from HOMAG 100 percent and purchased the most modern machine technology currently available. A massive step was taken in Freudenstadt, from a single machine to an interlinked system — with all the features and software applications of Industry 4.0.

The machines in the interlinked system were optimally placed in an existing building. Visitors can see that this is production with a high level of automation from the automated parts flow. The production begins with the cutting of the panels, which is done by an SAWTEQ B-300 (HPP 300 profiLine) panel saw with an upstream STORETEQ S-500 (TLF 411) storage system. The saw has a saw blade projection of 95 mm and can cut both single panels as well as packages. It is therefore designed for economical cutting of larger quantities. Further options increase performance or protect materials. A panel labeling system labels the unprocessed panel before it reaches the saw — accelerating the cutting process again. The label printer gives each cut part a barcode label which enables the part to be identified, from cutting right up to assembly. Between the cutting and the edge banding, the cut parts are initially placed in a SORTEQ R-200 (TLB 321) sorting buffer, which has a storage capacity for up to 1200 parts of different sizes.

The edges are glued on with the highly flexible edge cell which produces edges in zero joint quality in batch size 1 with laserTec – Next Generation. On this system for flexible production, a one-sided EDGETEQ S-810 (K 610) edge banding machine is used. The multi-sided processing in sequential throughfeeds reaches a high capacity even for commissioned production with constantly changing dimensions. There is a state-of-the-art unit changeover between two workpieces within the shortest gaps possible. The workpiece feed system feeds the workpieces in longitudinally and crosswise with precise dimensions and at precise angles. In combination with the power joint trimming unit, which is equipped with hydro tools for high-precision, tear-free processing of workpieces, this results in exact dimensioning in the throughfeed. The gluing station can process twelve different edges with automatic changes and no manual intervention. The laser unit with new diode technology is performance-optimized, and thanks to its simple construction, is very robust and takes up less space than the previous laser unit. The machine also offers the option of gluing edges with PU to satisfy special requirements with regard to resistance against heat and moisture optimally.

A return with an integrated rotary gantry creates a high-performance, interlinked material flow. Finished workpieces are separated automatically: all rectangular parts that do not require free-form processing are initially returned to the sorting before being transported automatically for further processing to a DRILLTEQ H-600 (BHX 560) processing center so that they can be drilled and trimmed during throughfeed. Parts that do require free-form processing are destacked at the edge outfeed and fed to the CNC cell with robot management for further processing.

The heart of the CNC cell is the CENTATEQ P-500 (BMG 512) processing center. This has a modular design and can be configured in accordance with customer wishes and requirements. Those responsible for production at erfi have given their BMG a high level of flexibility. The Drive-5C+ five-axis spindle was selected as the trimming spindle. The flexibility of the processing center is underlined by two aspects: firstly, the console table, which enables easy handling via consoles with high-precision linear guides and robust insertion aids with two pneumatic cylinders; secondly, the multi-processing drilling unit which can be swiveled 360 degrees, allowing all spindles to be inserted at any angle. This is also true of the chain tool changer which, with 72 slots and short changing times thanks to converters, represents the basis for the flexible use of a high number of tools and units. The fact that the laserTec system was selected for edge banding on shaped parts is due to the requirement that both straight and curved edges must have the same quality. As the processing times are considerably longer here, the parts handling has been transferred to a five-axis industrial robot. This allows the operator to perform tasks in parallel elsewhere.

The robot is immediately obvious to any visitor to the erfi production system. It is the external indicator of automated production. The automation starts much earlier, however — as soon as order-based data from production preparation is merged with data from the CAD/CAM system and the parts list management. Finally, the ControllerMES production control system from HOMAG creates CNC programs and production data for each part which is then transferred to the machines after a lead-in time. Here, new life is breathed into every part with a unique identification number that applies right up to final assembly. "The ControllerMES production control system from HOMAG gives us a platform that allows us to organize production processes optimally and perfect the interaction between machines and manual workstations," says Peter Bitzer, the IT expert and system administrator at erfi, explaining the new technical possibilities.

"The modular system supports the process at erfi sustainably — from the intelligent configuration and optimization of production data, through production planning, right up to the completeness check after final assembly," adds Harald Sieber, Senior Sales Manager at HOMAG Systems. "The software therefore meets the prerequisites for order-based production of products with a number of variants in an interlinked production." At the same time, the software makes the production transparent as there is feedback for every part of every order — the progress of production is known at every point in time. Production is therefore much easier to check and control. Any problematic situations are recognized early. In the event of any damage, the barcode of the part can be used to trigger reproduction at an early stage — not just when the part is missing in assembly. One feature of the ControllerMES is the option to merge production orders. Peter Bitzer describes one of the advantages: "In the preview, we can bring optional parts forward and mix them with mandatory parts for current jobs to get an optimal cutting pattern with low waste."

These advantages can no longer be grouped under the term "economic efficiency" because the installation of ControllerMES is an investment in the future. An increase in productivity is already noticeable because material consumption, idle times, and activities that do not add or create value are reduced and the throughfeed times are minimized. As a modular standard software, the system can be configured, extended, and adapted to new processes flexibly — with a 100 percent update capability. And that is exactly what those responsible at erfi already envisaged: they want to use the ControllerMES production control system for purchased parts and in-house electronic production as well. Because the system is connected to tapio, the world's first digital platform for the wood industry (see HK 6/17), digital products such as the MachineBoard allow you to query the current status of the machine, a malfunction, or error messages by smartphone. Conversely, via smartphone, the system advises the machine operator about important messages, such as malfunctions. As you can see, here too, erfi is proceeding completely according to the criteria of Industry 4.0.

Production cell with a robot for automatic material handling

Manufacturing Execution System - for the wood and furniture industry

A step forward for a better product!

Complete processing of shaped parts in a single run

Guided by the network

Industry 4.0 and Digitization at Battistella Company