Tecverde was founded in 2009 by a group of young entrepreneurs, with the purpose of making the Brazilian construction sector more industrialized and sustainable. 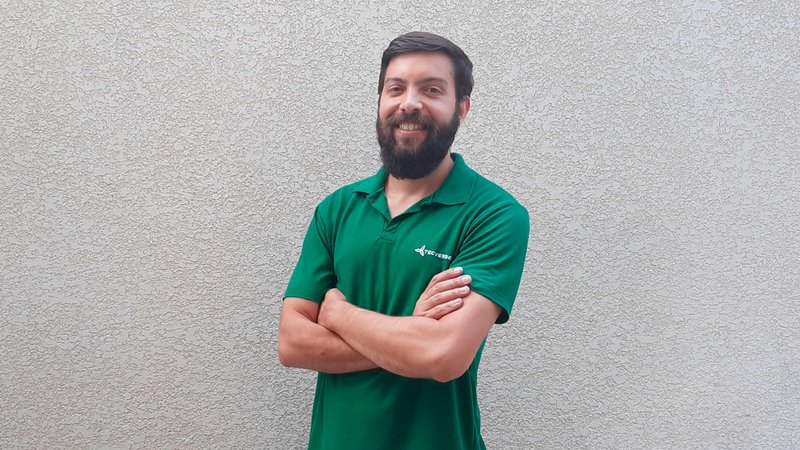 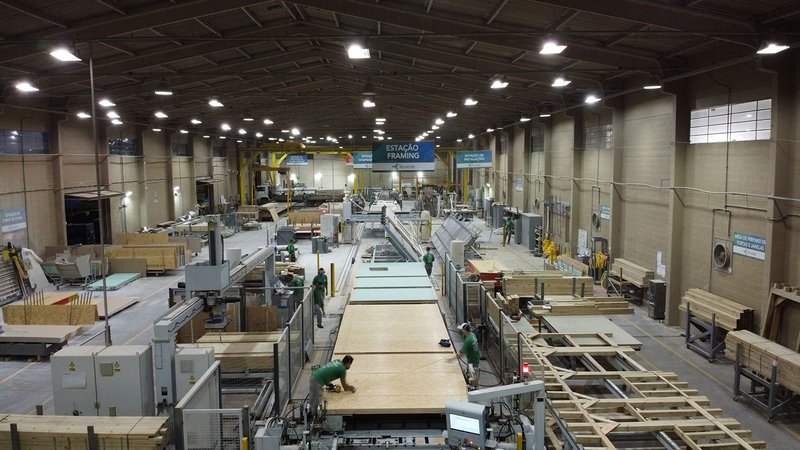 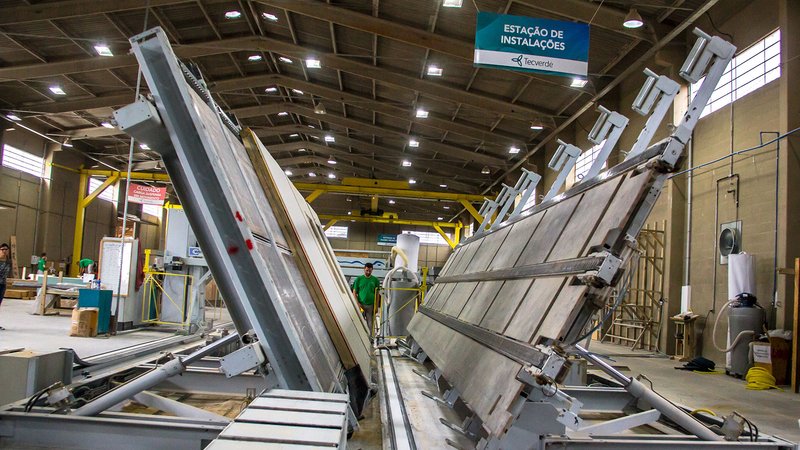 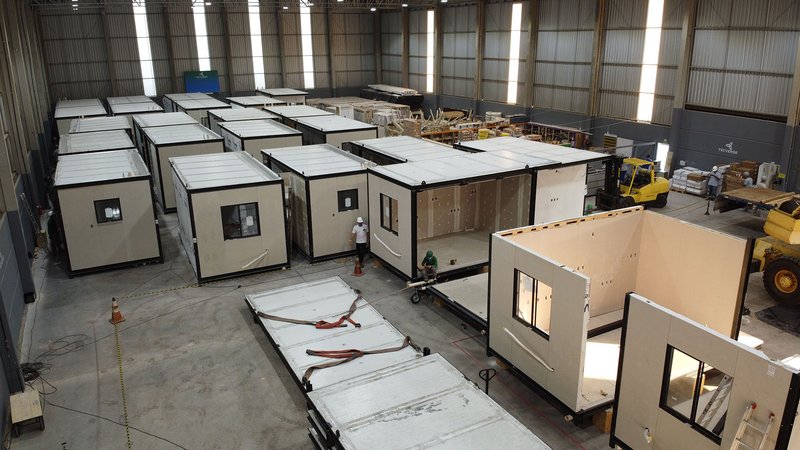 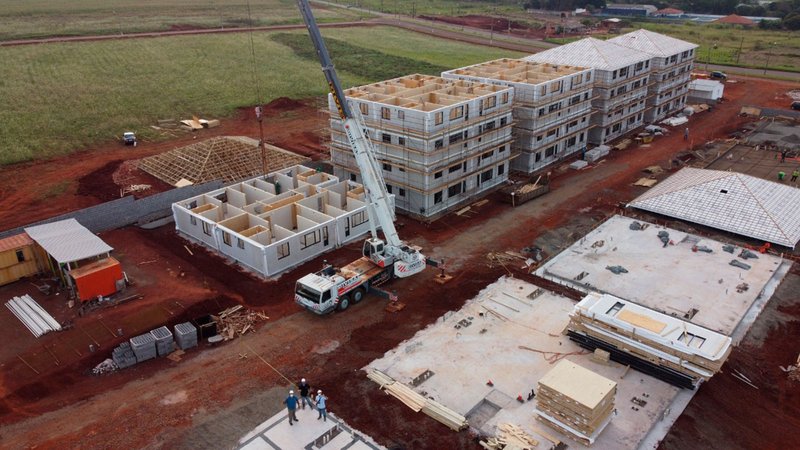 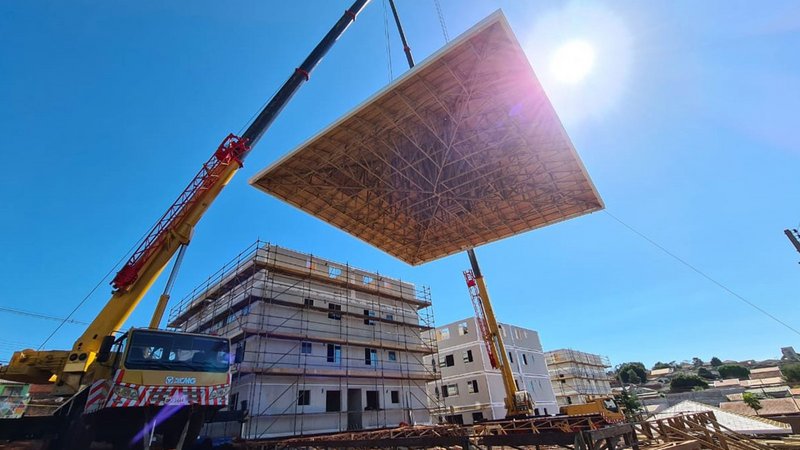 With the butterfly turning table the elements in the production line are turned. Image Source: Tecverde

It is possible to assemble a four-story multifamily building with 16 apartments in just six days, while a fully functional single house can be delivered in one day. Image source: Tecverde

The project had the aim of creating affordable housing. Image source: Tecverde

"Changes in consumer behavior, together with the climate change agenda, no longer support the model delivered by traditional construction methods."

Its first production started in 2010 with a small factory, initially focused on high-end housing in the B2C market. With handcraft operations and low production scale, it was possible to validate the technology and business model. During this period, the company gained prominence for its pioneering spirit in the Brazilian market and had projects awarded internationally. As a result, it attracted investors who contributed to its growth strategy, which has important milestones in 2012, when it achieved approval of the construction system in accordance with the Brazilian building performance standards and the government housing programs requirements, as well as in 2014 with the implementation of a new factory aiming at scale production, equipped with WEINMANN machines.
In 2016, another important development was achieved, with the approval of the first multi-family, multi-story building in an offsite construction system in Brazil. Ramon Kuhn Pollnow, R&D and Innovation Manager at Tecverde, describes the significance of this development: “This product occupies most of the production portfolio of the new factory and positioned Tecverde as the leader in multi-story offsite construction in Latin America.” More recently, in 2020 an important milestone occurred when the company was acquired by the Chilean company E2E, a Joint Venture between Etex and Arauco. Says Ramon: “This further strengthens our expansion and pioneering strategy in the development of more industrialized and sustainable technologies for the Brazilian construction sector.” Currently, the company has around 350 employees among its offsite and onsite production teams, engineering, and other support areas.

Tecverde operates in three business areas. According to Ramon, the B2B-area is the main business. “It refers mainly to the sale of industrialized construction systems to builders and developers with a high concentration of demand in affordable homes for government housing programs. In 2018, Tecverde was responsible for the construction of multi-story buildings in the Pinhas Park project – the development of affordable apartments.” This was the first project in the social housing segment in Brazil to receive a sustainability certification from the Green Building Council. In the same year, Tecverde was also recognized by the Brazilian Chamber of Construction Industry (CBIC) for the R&D project for the development of a single-family house which can be assembled and finished in one day at the construction site by a multifunctional team of seven workers. This model is planned to go on the market in 2022. The other business area is the B2C-model which is mainly related to single-family houses where growth can also be seen. Ranging from low to high-income housing, in a combined housing and real estate credit solution for the end customer, in partnership with the FinTech Homeland. The third business division is focused on special buildings, outside the housing segment, where specific projects such as schools and hospitals are carried out. Right at the beginning of the Covid pandemic, Tecverde was challenged to participate in hospital construction projects for the treatment of patients. Ramon: “We achieved record production deadlines with the combination of state-of-the-art 2D panels, 3D modules and fully integrated kits finished offsite, enabling delivery to new hospitals within 35 days.” Tecverde has an integrated platform of kits, panels and modules, which according to the project specifications are chosen. They deliver projects only with 2D closed panels, fully modular constructions (3D), or even a combination of both, which is usually presented as a more optimized alternative.

The construction sector, which has impressive proportions and, even so, with artisanal processes, inspired Tecverde to seek technological solutions in other countries that suited the needs of Brazilian society, as well as adaptable to building materials and national labor characteristics. Thus, the definition by the light wood framing system occurred, with the research being carried out on the state of the art of the construction system and the development process to adapt to the Brazilian market, in tests and approval of the technology. Ramon: “The offsite light wood framing technology allows the adoption of an industrialization mindset that tackles some of the main pains of traditional construction systems. Through production in a controlled environment, with the support of an automated production line, it is possible to achieve levels of quality, safety and productivity that increase the efficiency of the construction process. The elimination of these inherent inefficiencies, rooted in traditional building systems, allows a product with better performance and embedded technology to be offered faster and at a lower cost to the end customer.” Tecverde’s factory has a specific area for raw material transformation, where wood and panels are cut, in addition to the pre-assembly of electrical, plumbing and window frames that make up the wall panels, floor, roof structures and other elements. The second production area is then dedicated to the assembly of these panels in two main lines, one dedicated to walls and the other to floors, while a third, more flexible workstation is responsible for producing special elements. The panels are sent for dispatch and assembly on site, except for those directed to volumetric modules, as in the case of bathpods that are assembled at the same factory. In this factory, Tecverde has an installed capacity for the production of 7 houses or apartments per day/shift. According to Ramon, it is now possible to assemble a four-story multifamily building with 16 apartments in just six days, while a fully functional single house can be delivered in one day. Only the finishing is left for the contractor.
The automated production lines were delivered by the German company WEINMANN. In its first international technical mission, Tecverde visited WEINMANN in Germany and had its support in the technology transfer even before the first factory started operating. This relationship started to be intensified in 2014, with the implementation of the new factory. Ramon: ”The implementation of this line had full support during its installation, commissioning, labor training and the start of scale production, to the point where Tecverde achieved autonomy to manage its preventive maintenance.”

As it is a dry construction system, with a planned design for prefabrication, which uses as main input materials from renewable sources in abundance in Brazil, the construction system developed by Tecverde carries a sustainability bias. At the building site, the use of water is eliminated in its assembly activities and low waste generation are achieved through modulation strategies, having the small amount of waste fully co-processed and reused. Even in the use of the building, its superior thermal performance has a positive impact on the energy demand for housing climatization, which are in line with the eight Brazilian bioclimatic zones. Regarding the analysis of the building's life cycle, Tecverde‘s product still provides a reduction in CO2 emissions, since it uses wood from local planted forests as its main raw material.

Latin America suffers from a great demand for affordable homes, with the housing deficit in Brazil alone reaching 7 million homes. This number does not tend to be reduced when taking into account the phenomena of urbanization and technological stagnation of the sector, which historically has not been capable of addressing this problem. Ramon: “Changes in consumer behavior, together with the climate change agenda, no longer support the model delivered by traditional construction methods. The low performance and low appetite for technological evolution in the sector, led to unsafe and increasingly less attractive working conditions, which culminate in the shortage of qualified labor. This is a problem that is not aligned with the housing demand and the cities development.”
Recently, South America has seen the emergence of more initiatives focused on offsite construction in light wood framing, as well as in other systems. In addition to these newcomers, who invest in their own factories and product strategies, it is also clear that the industrialization of construction is on the agenda of the main builders and developers. This situation has attracted more and more interested parties, fostering from a more robust network of suppliers, the creation of specific standard codes for the regulation of these innovative systems, as well as a movement in the academy to train professionals. These are initiatives that strengthen an important industrialized construction ecosystem on the continent. Therefore, Ramon sees the further development of the market in Latin America very positive: “The convergence between the existing opportunity gap and the growth of this ecosystem can position Latin America as one of the main industrialized construction poles in the world.”

The charm of serial construction

Due to the impact of the strained material situation, Materio GmbH has increasingly focused on project…

Affordable living space in a large city? There’s no such thing! This is the experience of people who are…