Thanks to the investment in state-of-the-art technology, Budman House from Chelm is ideally equipped to meet the increasing demand for timber frame houses. 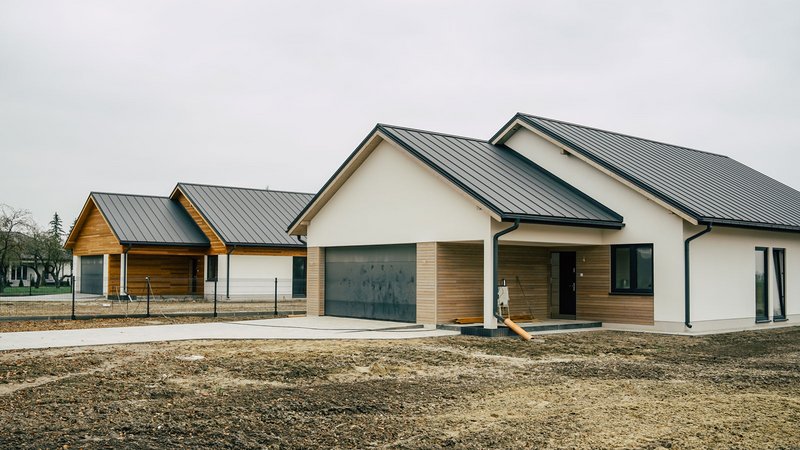 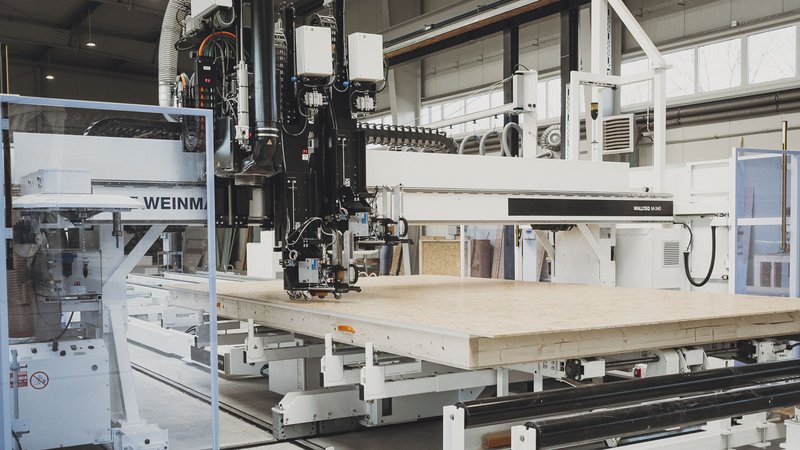 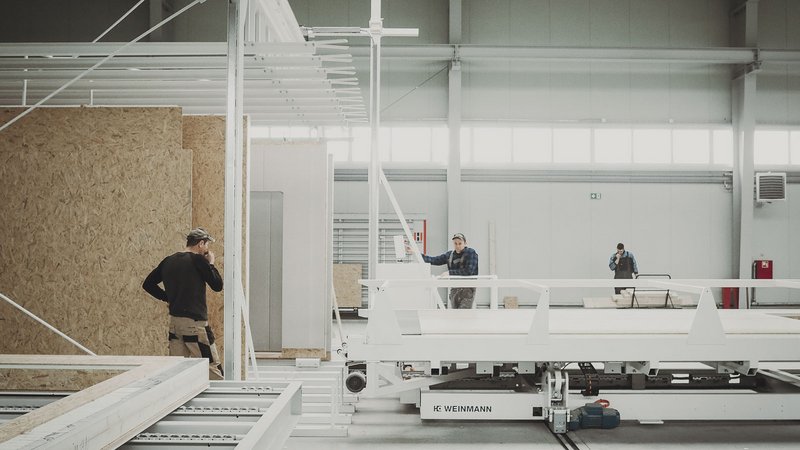 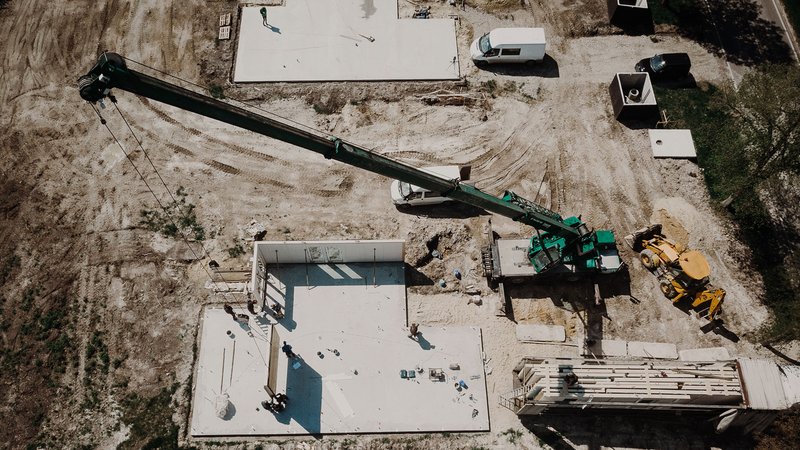 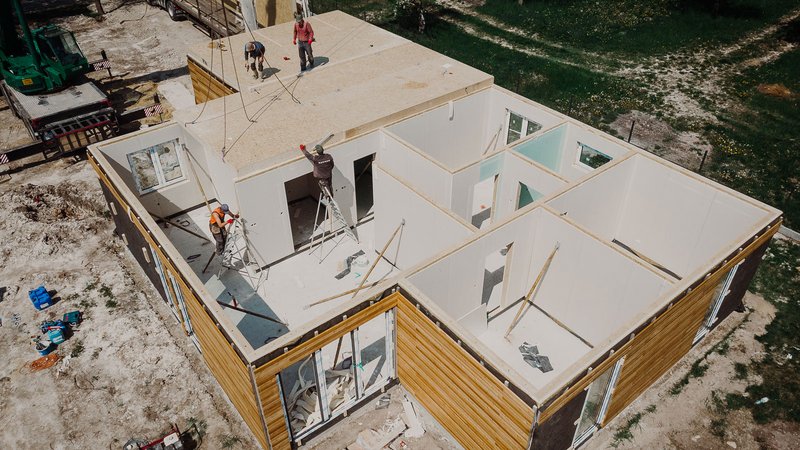 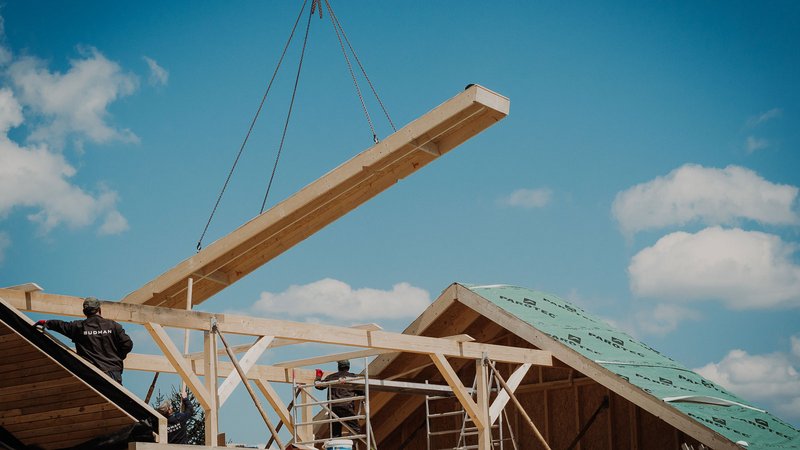 Budman House focuses on the construction of single-family homes and apartment buildings.

Modern production line for the manufacture of wall, roof and ceiling elements.

With the production line, Budman House has increased their production speed and also created a consistently work process.

Within three or four days, the prefabricated elements are assembled at the construction site.

Assembly of a single family house with garage.

Even the roof and ceililng elements are completely prefabricated in the production hall.

"Building with timber is ecological; we use renewable raw material. In addition, assembly on site is unbelievably quick thanks to the high degree of prefabrication."

Budman House is a Polish construction and technology company and part of Budman sp. z o.o.. Budman House employs around 20 people at its site in Cheim, in the province of Lublin, and generates annual sales of around PLN 10 million. The focus here lies on the construction of single-family homes and apartment buildings, but public buildings also form part of the product range. The majority of projects are delivered within a radius of 200 km. A larger project of around 50 holiday homes is currently being built on the Masurian Lake District, about 400 km away.

Trend toward building with timber

According to owner Piotr Lejman, there is a clear trend toward building with timber: "The demand for houses in timber frame construction is increasing. The shorter construction times made possible through prefabrication are one reason for this. So far, however, there are only a few companies in Poland that complete the houses in the factory. There is still a great deal of potential here." Despite this growth in timber construction, the market in Poland continues to be based mainly on traditional solid construction. However, there is an increasing awareness of timber frame construction and the use of wood as a building material. The advantages are obvious in the eyes of Piotr Lejman: "Building with timber is ecological; we use renewable raw material. In addition, assembly on site is unbelievably quick thanks to the high degree of prefabrication."

In order to realize this high level of prefabrication, the company invested in state-of-the-art machinery in 2019 and today manufactures the complete wall, roof and floor elements with a WEINMANN production line. As early as after the initial consultations, Lejman was convinced that WEINMANN was the right partner for this project: "The cooperation while planning the plant was excellent and confirmed our positive impressions. Already in advance, we have received very good feedback from other Polish manufacturers regarding the performance provided by WEINMANN, in addition to the technology, above all in terms of support and service."

The CNC-controlled machines enable the maximum precision and performance during production. For owner Lejman, the high performance was a decisive reason for the investment: "Automation increases our production speed and we need fewer employees. Also in Poland we have too few skilled workers. This makes a high degree of automation all the more important for us, as well as well-trained employees."

The production line consists of a BEAMTEQ B-540 carpentry machine, several assembly tables and a WALLTEQ M-340 multifunction bridge. In work preparation, the employees create the data that are then transferred to the machines and processed. The first step is to cut the belts and studs with the carpentry machine. On a separate machine, the panel is pre-cut before the multifunction bridge performs the remaining work on the wall, roof and floor elements, such as fixing the planking layers, drilling the installation holes, inserting window and door openings and formatting the outer edges. This is also where the insulation and all installations are introduced and the individual layers of planking on the inside and outside are completed.

Then, the windows and doors are installed and the finishing work is complete. In the final step, the elements are transported to the wall storage before they are loaded. The prefabricated elements are assembled on the construction site within three to four days. Interior fittings come next followed by completion, which is also carried out by an in-house construction team.

In order to successfully integrate the new production technology into the company, the employees were trained right from the beginning. For Piotr Lejman, this was a very basic building block for the successful introduction of the new technology: "Our employees were very motivated, even though there was a lot to learn at the beginning. It was also a matter of coordinating the production line and the entire production process."

Today, almost 18 months after installation, Budman House is extremely satisfied with its production technology. The advantages are, for one thing, the high production speed and efficiency, but also the fact that the working process is designed consistently and ergonomic working is possible. Piotr Lejman sees the further development as a huge positive: "Demand continues to rise and we are looking very optimistically into the future. In addition to the Polish market, we also want to supply other European countries in the future."

Budman House is a Polish construction and technology company and part of Budman sp.z o.o.. Budman House employs around 20 people at its site in Chelm, in the province of Lublin, and generates annual sales of around PLN 10 million.

During the modernization of its production line, NEMA placed special focus on individual solutions and now…