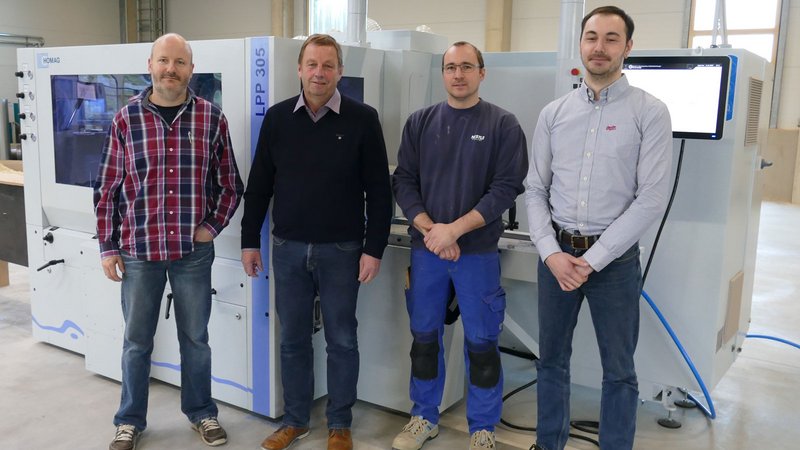 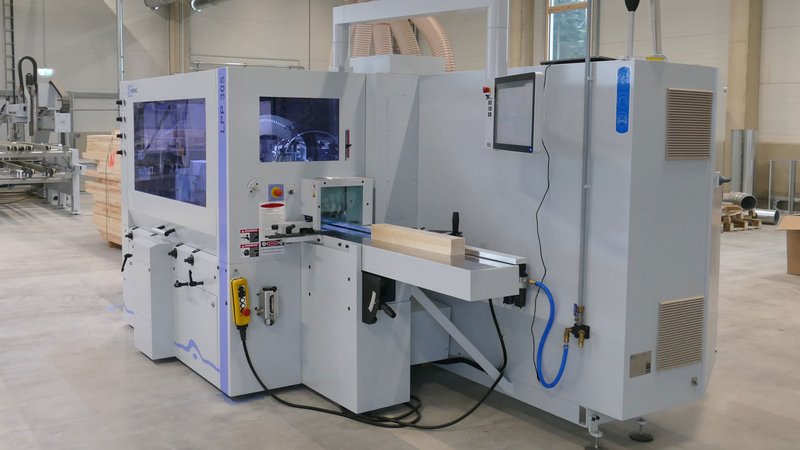 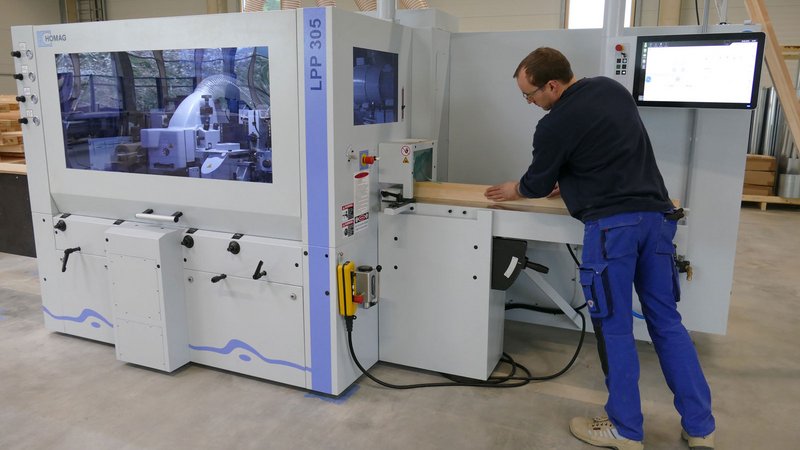 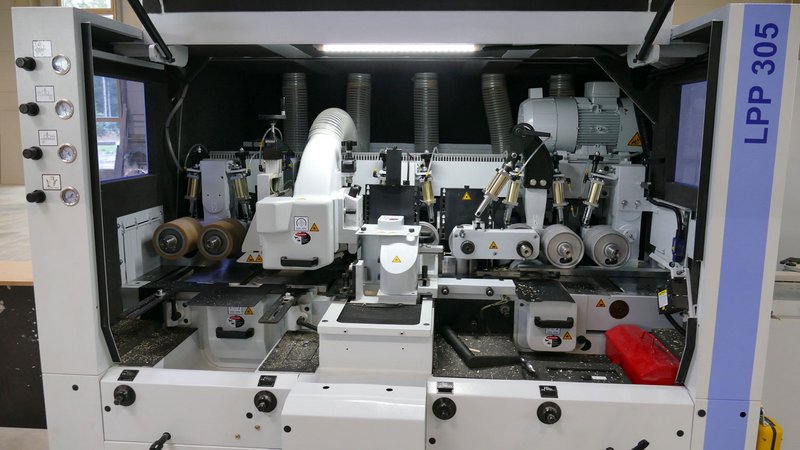 The machine is now located in the new facility, next to the CNC window processing center BMB 812 powerProfiler (now the CNC router CENTATEQ S-800). The second powerProfiler will be dismantled at the Tumlingen site in the next few weeks and will also be moved to the new facility. The LPP will then supply both machines with material.

The inner workings of the HOMAG planing machine MOULDTEQ M-305

Intuitive machine operation via powerTouch: The Nestle employees are already familiar the principle of powerTouch operation from the HOMAG powerProfiler (now the CENTATEQ S-800). This makes it much easier to learn how to create formulations and change tools. And of course, learning the basics of machine operation with powerTouch is very easy and intuitive in itself.

The machine's control system is a big advantage for us. We know the principles of powerTouch operation from our HOMAG powerProfiler machines. The machine is much easier to operate and it's easier for the employees to use both machines because they already know how to operate powerTouch.

At LIGNA 2017, HOMAG presented planing machines for the first time in its history. With more than 20 years of experience in the field of solid wood, the company was venturing into a new market segment. These new machines have been positively received by our customers and with them HOMAG can cover the complete solid wood process using machines from one source.  . As is standard with HOMAG, the planing machines are supplied with the powerTouch user interface. This enables cell solutions with controls that are ideally aligned with one another — for processing both solid wood and timber materials.

Courage and foresight pay off

Nestle Fenster, from the Black Forest area, was one of the first companies to buy one of the new planing machines (prototype). Since January, the company has been operating the HOMAG LPP 300 (now the MOULDTEQ M-300) with five spindles and is now intended to supply two powerProfiler window machines (now the CENTATEQ S-800) with material.

For managing director Jürgen Nestle, there were two deciding factors for investment in the new machine: "The machine's control system is a big advantage for us. We know the principles of powerTouch operation from our HOMAG powerProfiler machines. The machine is much easier to operate and it's easier for the employees to use both machines because they already know how to operate powerTouch. But there was another aspect that helped us make the decision: We wanted to be able to plane larger dimensions in the jamb/bar area, as we need them for our product range."

For decades, Jürgen Nestle has been well-known in the region as a pioneer in the field of window construction. The history and development of the company are extraordinarily impressive. Jürgen Nestle is the 11th generation manager of the company (which now has around 70 employees) and is successfully continuing what the founder Ulrich Nestle began in 1622. Once classic craftsmanship, lead glazing, church windows, etc. were once vitally important, however in this day and age it is efficient product ideas, perfect quality, and first-class industrial production technology that are more crucial.

Early entry into the world of CNC

In a bid to stand out against other window manufacturers, Nestle has made a number of good business decisions that have delivered real results.  An example of which was In the year 2000, when the company entered the world of window production using CNC technology.

"This was a decisive step for us and we were one of the first companies to do it. We had already been impressed by the processing quality of CNC machines. Back then, we took the step with HOMAG, because we believed that at that point in time, no other company could offer us the right solution. Of course, one of the benefits was the fact that we are geographically close to HOMAG and our contact partners."

In 2011, Nestle invested in their third HOMAG CNC and bought their first powerProfiler and a second in the following year. Today, Nestle uses these machines to produce all variations of windows.

"We primarily produce wood/aluminum windows, wooden windows and jamb/bar constructions. The wooden windows are mainly windows for listed buildings, with all the special requirements that come with them. Our elements are increasing in size and complexity, and this is where we have the big advantage: with good work preparation and good technicians, we are in a position to create complex and individual solutions. Here the work is continuous: from the customer's wishes and the development of the product up to assembly and subsequent maintenance."

Alongside the investment in modern machine technology, Nestle set further decisive milestones. These include the construction of a new plant Hörschweiler in 2012, and the construction of a new storage and logistics facility in 2015. Today, Nestle produces approximately 15,000 window units in total, over an area of around 5000 m² and has further changes planned for expansion.. Soon, for example, the exhibition of windows and doors, which is already the largest in the region, is to be increased again.

It is likely the company's durability over the centuries can be attributed to the combination of foresight and the ability to embrace innovation despite it’s risks. This  recipe for success has earned the trust of customers not only in the region, but also in countries such as Switzerland, France, Ireland and Belgium.

A world first will become a fixed component of future production

Jürgen Nestle has never rested on the laurels of his success, and his decision in 2017 to purchase a new plane is an example of this. The machine is now located in the new facility, right next to the BMB 812 powerProfiler. In the next few week the the second powerProfiler will be dismantled at the Tumlingen site and will also be moved to the new facility. The LPP will then stand at the heart of the wood and wood/aluminum window production, supplying both machines with material. The aim is to fill both machines with planed parts from the LPP. For Jürgen Nestle, this is the crucial step for continuing growth and his employee Carsten Rosner is plays a vital role in making this happen. Over the last few weeks, Rosner took the first steps with the new machine, and comparatively it has already produced noticeable results.

"The surfaces that we produce with the machine are much better. Brinnelling is barely noticeable or doesn't occur at all. Even just the feed rollers and how the work piece is guided through the machine are much more stable than with our other machine and the material is transported much more easily. The contact pressure of the new machine is also significantly better," says the production manager of the wood department.

For Rosner, everything to do with the operation of the machine is especially positive. The operation of the machine is something that Roser finds particularly positive due to its ease of function. The global market has equipped PowerTouch system has become an icon to for HOMAG’s operating philosophy to  The planing machines are equipped with powerTouch which has now become established on the global market as the HOMAG operating philosophy. The system unites design and function to create a unique generation of control systems. At the heart of the concept is the 21.5" widescreen multi-touch monitor that allows machine functions to be controlled directly by touch. Additional operating comfort has been specially developed for the planing machines. The operator can handle the machine intuitively using gestures (e.g. "swiping" to change the spindles). The design has been specifically developed to increase operator comfort and usability.

With just a few touches, the operator can load and select processing programs on the touchscreen. "Our employees should be able to operate both powerProfilers and the plane simultaneously. And that's very easy with the new user interface. It's much easier to learn how to create formulations or change tools because we all know the powerTouch system already. And of course, we mustn't forget that learning the basics of machine operation with powerTouch is very easy and intuitive in itself. We want all employees to be able to use the system in production today and in the future — and that's absolutely the case," says Rosner.

Important for Nestle: the variable feed

Not only has HOMAG focused on the machine operation but also machine technology. This has resulted in the inclusion of a variable feed, a variable spindle speed, a tool management system and a ProLock spindle clamp. According to Rosner, these are "considerably faster and easier" than the obe he used before. The machine can be set up in the blink of an eye.

However Rosner draws attention to the variable speed in particular, which is very important for production at Nestle. He is currently operating the planing machine with a feed speed of 12 m/min. From a technical perspective the speed could be faster, but then that would make investment in an automation solution a sensible option. The feed speed and the speed of the individual spindles can be aligned optimally with the material to be processed. The standard equipment enables a variable speed of 4000–8000 rpm and a feed speed of 4–26 m/min.

In short: the ideal solution

All in all, Jürgen Nestle is very happy with his decision to buy the new machine: "It was very important to us to combine the planing machine's control system with our CNC processing. We finally have a unified platform for programming and operating our machines. Plus, HOMAG has always provided a collaborative partnership. I like that they're always trying to create solutions which benefit both sides."

Looking to the future, one option for Nestle could be to replace the five-spindle machine and upgrade to  a six-spindle machine. This has a second upper shaft, meaning it can produce better quality surfaces while increasing  and tool life..

By selecting a special window configuration, it would also be possible to extract the glass fixing rail and the finished surfaces at the top and bottom in the plane. After planing, these rails are collected and then profiled directly on the system in one throughfeed. This saves time and relieves the load on the window CNC.

A firm "grip" on window production

For his window production, Joinery Meinzinger invested in a new sanding machine - a true all-rounder.