The Gätke carpentry firm in Osten-Isensee, Germany, has taken the step to ensure that the business is set up in a good position going forward. 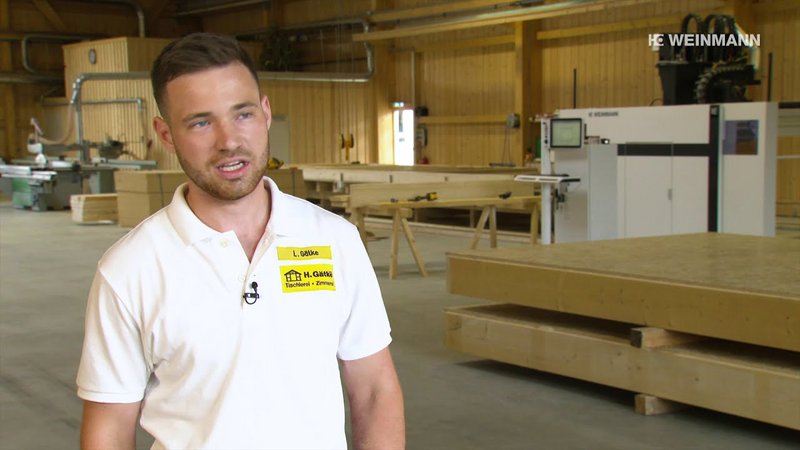 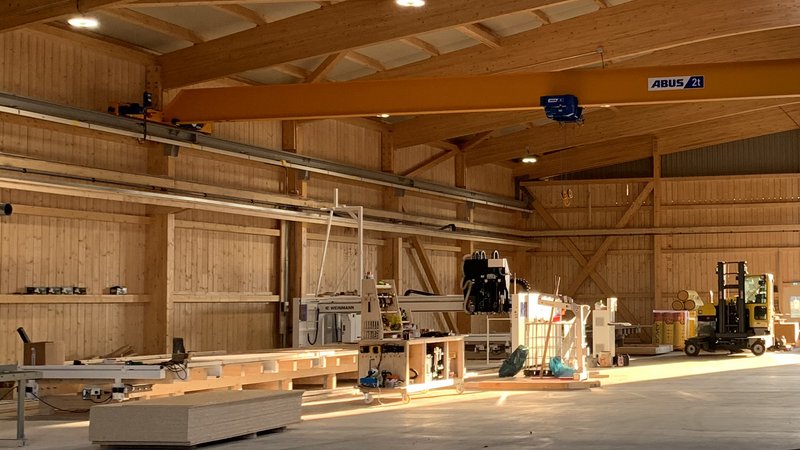 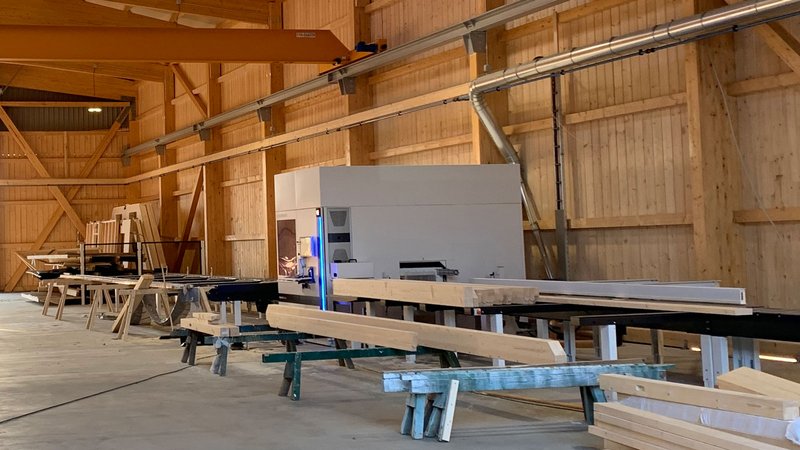 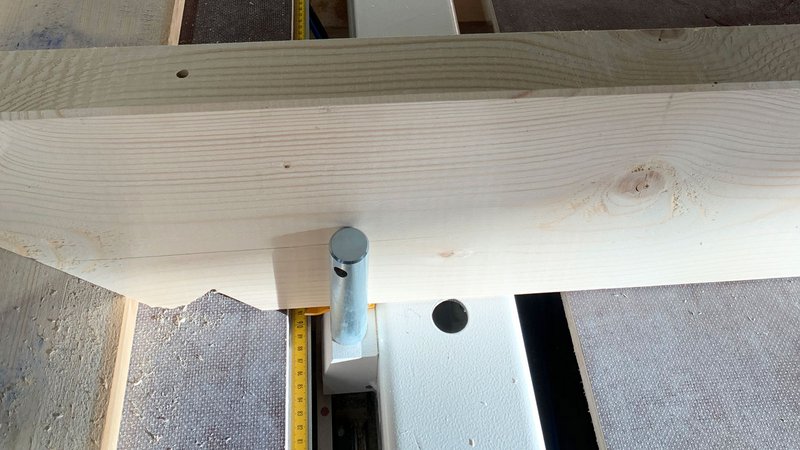 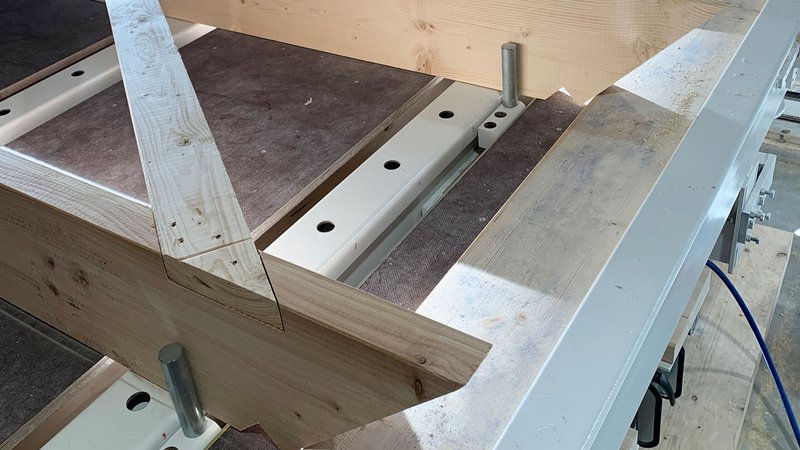 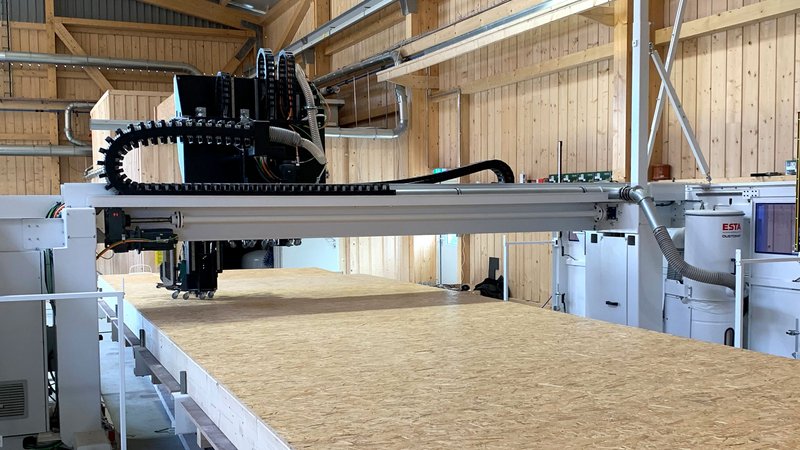 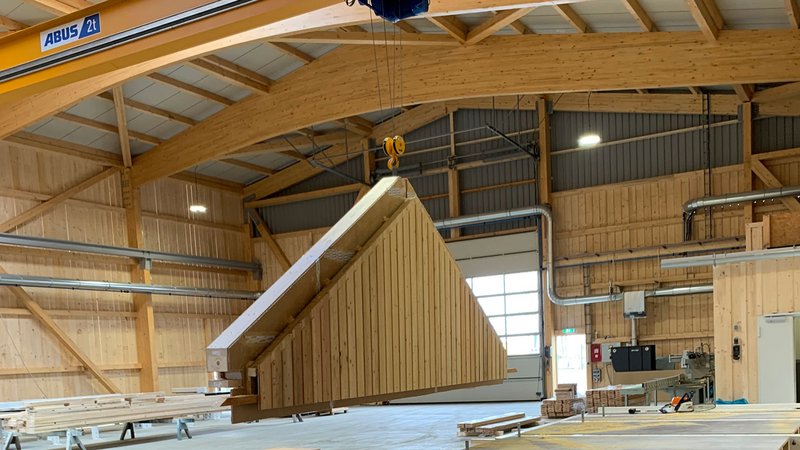 With the investment in the multifunctions bridge WALLTEQ M-120 and the two assembly tables, the carpentry Gätke has automated the timber frame construction.

With 1,100 m² the production hall houses the complete timber construction.

Optimal integration of the multifunction bridge and the two self-build tables in the production hall.

The whole beam processing is done automated with the BEAMTEQ B-540.

Precise panels were required for the integration of a two-storey timber construction in an existing hall.

The dimensional accuracy for the installation makes the assmbly on-site much easier.

The prefabricated wall element can be tilted and transportated by a hall crane.

"We manufacture by ourself, in order to maintain flexibility."

An article of the magazine Zimmermann, issue 06/2020. Click here to find the whole magazine

Founded in 1970, the Gätke carpentry firm has been working in carpentry and joinery for 40 years, currently employing 15 people. At its 500 m² site, the company produces staircases and furniture with a HOMAG CENTATEQ P-120 processing center. The carpentry area of the business involves constructing detached houses, agricultural constructions, and building extensions. The focus of this area is on building customized houses — in recent years, the company has constructed between three and five houses each year. Gätke works with its customers to design the house that they want. The firm creates the drawings and plans the project, requests the building permit and constructs the house. It provides complete support from the very beginning of the project up until the house is complete. Until now, both element construction and beam processing have either been processed manually or, in some cases, the services have been subcontracted to external providers. Due to an increase in demand, however, Gätke is examining how the company will be able to ensure that the required capacities are met, because, as is widely known, skilled staff are hard to find. For Frank Gätke, managing director of the Gätke carpentry firm, subcontracting beam processing work was not a long-term solution, as his focus was on making Gätke a more flexible company: "To be and to remain flexible, we have to carry out production ourselves." His solution to this was to start automating the process.
However, before this step could be taken, the Gätke carpentry firm had to overcome quite a different challenge — in February 2019, the entire carpentry hall burned down in a fire. There was never any question of whether the hall would be rebuilt. For Frank Gätke and his son Lukas Gätke, who has been employed at the company since 2017, it was clear that the business must continue: "Our business is our home, obviously we wanted to keep it going." In no time at all, the new hall was designed and constructed from timber. Measuring 24.5 m wide and 48 m long, it houses the entire carpentry area. The automation process was also implemented at the same time that the hall was constructed. This included installing a BEAMTEQ B-560 carpentry machine, which, thanks to its compact design, takes up little space and could be integrated into the hall seamlessly. In the panelization area, Gätke opted for a WALLTEQ M-120 multifunction bridge with two BUILDTEQ A-300 self-assembly tables. The investment required was proportionally low, meaning this solution enables even businesses with smaller production volumes to automate their processes.

Walls, ceilings and roofs — everything in one system

The carpentry machine is now used for all beam processing work for wood frame construction and roof beam processing, meaning there is no longer any need to subcontract this type of work. The entire panelization process is also now carried out by the new system. The CAD data created during work preparation is transferred to the machine via the WUP interface and is then processed accordingly. All elements are produced with the multifunction bridge, regardless of whether they are standard and gable wall, or roof and ceiling elements. Due to the capacity and flexibility required for this, Gätke decided to combine the WALLTEQ M-120 with two self-assembly tables so that wall elements can be manufactured on one table, while roof and ceiling elements can be manufactured on the second. To facilitate the manufacturing process, one of the self-assembly tables is equipped with roof and ceiling clamps that simplify the process and increase the accuracy of the finished element. The roof rafters and ceiling beams are inserted into the opened clamps and fixed in place. Thanks to the fixed stop positions, the width tolerances of the individual beams no longer need to be considered. When the clamps are closed, the beams are aligned and clamped accordingly and any minor twists are corrected, meaning that the often laborious and time-consuming task of aligning the rafter frameworks is no longer necessary. The system can therefore be used as required, whether it's for walls, roofs or ceilings. What's more, Frank Gätke is already planning additional uses for the WALLTEQ M-120, such as shaping steps and panel cutting.

A long startup phase wasn't an option, as there was an important upcoming project right from the start of the automation process. This meant that it was even more important that there were no delays in the schedule. Frank Gätke was more than satisfied: "The installation went really well. The machines were installed, switched on and work began. It happened very quickly, it was great. I was impressed by how soon we were able to start production." And the initial project was not an easy one. The plan was to integrate office space into an existing commercial hall by building a two-storey timber frame construction. Gätke used a 3D scanner from Faro to measure the dimensions for this job, which made it much easier. Using the scanner, the entire building could be measured accurately. This saved a lot of time and ensured the planning phase was completed to a high standard. Using the Sema beam processing program, the design phase could be done directly in the scan produced. It was highly important that there were no inaccuracies of any kind during the production stage, because then the project would not fit into the hall. Elements had to be produced for a total 1200 m² of wall surface. Thanks to the new system, the project ran smoothly. Frank Gätke was impressed: "The dimensional accuracy for the installation was outstanding. It was great, it couldn't have been better." The multifunction bridge passed its test with flying colors. The machines have now been in use for around five months and Frank Gätke is very happy: "We are producing everything ourselves again, and have been able to do so in just a short space of time. This means that we're not dependent on external suppliers, and can even manufacture a carport in the meantime. We have a cost-effective and flexible setup." Making the change to automation was exactly the right decision for the Gätke carpentry firm.

Since the carpenter Gätke was found in 1970, they produce individual high-end family houses as well as buildings for the agraicultural use and furniture. The reason for their success is that they handle the entire process in-house, which improves the customer experience.