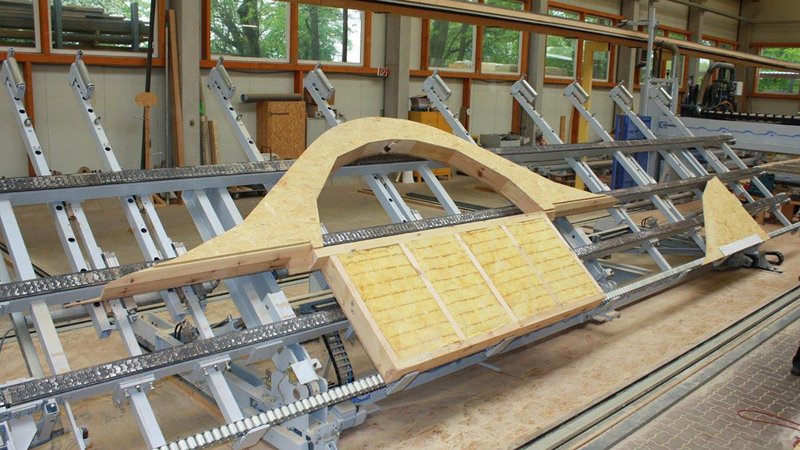 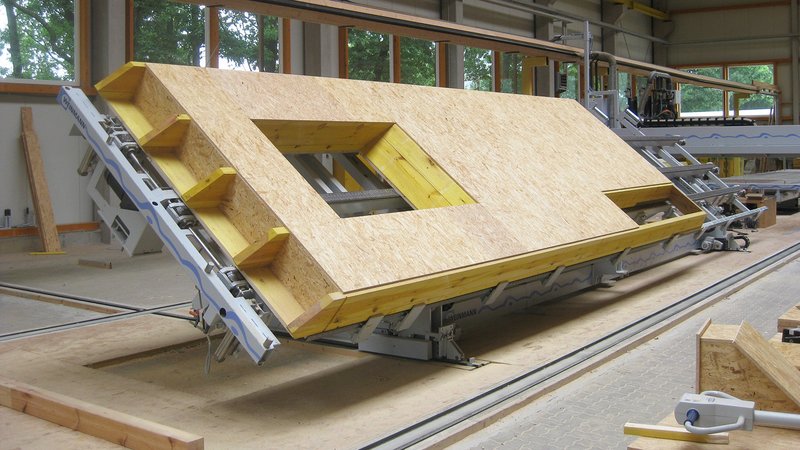 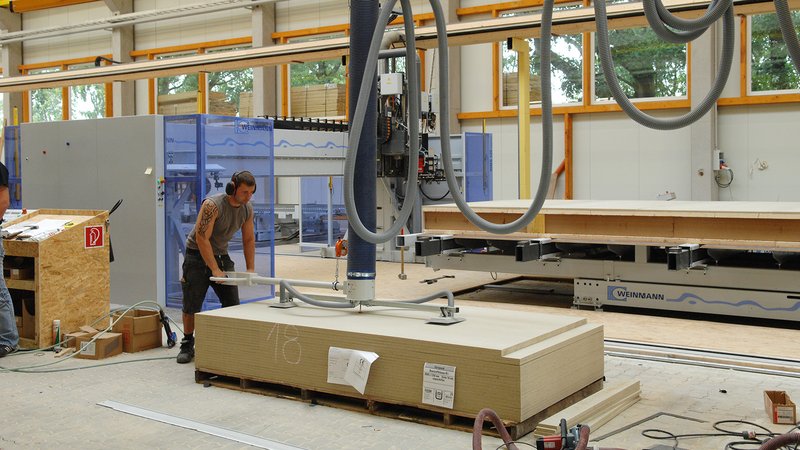 The processing times for e.g. bat dormer are approximately 60% shorter

Production of a wall element

Use of panel vacuum suction units on a multifunctional bridge

After reaching the capacity limits for the production of timber frame elements in 2008, master carpenter Daniel Hamdorf restructured his company extensively. Since then, he has increased sales in timber frame construction of approx. ten times with the same number of employees.

The Hamdorf carpentry business in Fahrenkrug, Schleswig-Holstein, is a good example of the fact that many timber work companies have successfully survived the financial crisis. In 2009, Managing Director Daniel Hamdorf invested 2.3 million in his company and increased sales tenfold in this business segment. This was a measure he decided on only because there was a high demand for his products even during the crisis.

It was the timber panel construction line of business that Daniel Hamdorf upgraded in the middle of the crisis. In other lines of business, his carpentry, with a total of 50 employees, produces traditional carpentry work such as roof structures and assembles nailed trusses, covers roofs, and also constructs facades. It also supplies components to other carpentry businesses. At present, supplies to other businesses make up approximately 45% of sales.

With regard to timber frame construction, Hamdorf focuses on commercial constructions, and the demand for multiple dwelling units, kindergartens, office buildings, schools, and refugee centers is constantly increasing in his region. Hence, in 2008, the carpentry business reached its capacity limits in the production of timber frame elements. At the time, the company was producing timber elements for approximately six houses per year with three employees. "The demand was actually for triple that amount," Daniel Hamdorf remembers.

Stepping up to the plate with the restructuring

Instead of merely employing one or two more people and buying a new work table, the master carpenter stepped up to the plate in line with the motto of "all or nothing." In the first step, this meant erecting a new hall for timber frame construction on the company's site: 25 x 60 m, with a hook height of 7 m and an overhead crane with 5 t load-bearing capacity. He also invested in a modern telecargo system with two trailers and eight swap trailers to deliver his components to customers.

The core of the restructuring of his company was the purchase of a WEINMANN multifunction bridge with three work tables, which immediately expanded his capacity limits: With this automated production system, Hamdorf was able not only to satisfy the existing demand for timber frame elements; in the years that followed, there was a significant increase in orders. Today, the carpentry business produces components for around 60 timber houses every year, having increased their volume in timber frame construction tenfold.

The level of effort involved in work preparation has also increased. However, this effect is more than compensated for by the shorter assembly times that have become possible due to the increased component precision and level of prefabrication. The fact that the company works more profitably as a result is obvious for Hamdorf: He has ultimately achieved this significant growth in sales in this line of business without taking on additional employees.

The number of tables in the production line has now increased to five. Four tables were used from the very beginning: Table 1 is a WEINMANN assembly table from the old production system which has been recycled and is used today for producing the frameworks. Deposited by hand, aligned with a clamping device, and nailed manually, the finished frame work is taken to table 2 by overhead crane. This table is the first new table in the production line.

Here, the timber frame is planked. The planking materials are located directly adjacent to the table and the employees can move them with panel suction devices without too much physical effort. The multifunction bridge then clamps the planking and processes it with the saw and trimmer. The planking is cut to size and openings for windows, sockets, light switches, etc. are created.

At peak order times, there are now shorter idle times for the multifunction bridge, thanks to the separation of these process steps from the framework production — provided there is no bottleneck or backlog further back in the line.

In the next step, the framework, which has now been planked on one side, arrives at table 3 in a turning operation. Here, the insulation is introduced before the element is transported to table 4 via a longitudinal conveyor. This table can be moved in the crosswise direction. On this table the second planking is applied. It is then secured and processed by the multifunction bridge.

The element is then transferred to table 5, which Hamdorf procured later: "Today, this is where the special processing takes place, for example, a timber shell is applied, windows are installed, or installation levels are built in.

We also use the table as a short-term storage space for up to two wall elements if there is a bottleneck in loading. In our carpentry, the elements go directly from the last table to a swap trailer."

This dual function means that table 5 is an important station for providing some relief for the workflow in the hall and preventing bottlenecks in the production line.

The system was installed in the new hall in 2009 and commissioned by the employees without any major initial difficulties. There was also no long optimization phase for the production processes in Fahrenkrug. Daniel Hamdorf says: "Of course, you have to discuss the changes with the employees beforehand but many of them are obvious and we also have good employees who can implement such processes without any problems. I'm proud of that."

"WEINMANN also provides very good advice in the lead phase, develops a hall layout together with the customer, and offers training courses for everyone involved. Of course, I also took a look at systems in some other businesses beforehand. This quickly reveals what you need to pay attention to with automated production."

Hence, in addition to the intended increase in capacity, other expectations of the new production technology were quickly satisfied: "Back then, we also wanted to bring our positive experiences from automated beam processing into the element production," remembers Daniel Hamdorf. He associates "positive experiences" first and foremost with professional quality management.

In this regard, the venture was a complete success for the company: "Today, we supply our customers with a constant, high quality that we can calculate: a high level of prefabrication to an industrial level of precision and without any reduction in quality."

Hamdorf's desire for the greatest possible flexibility has also been fulfilled: "On the WEINMANN system we produce in batch size 1, meaning that we can deliver what the customer wants."

That holds true not only for the different insulating materials that the company inserts or blows in with an Isocell system; it also applies for complex wall constructions, complex details, and wall panels with static high loads as are often found in commercial construction: "The customer doesn't have to adapt to our wall construction; we adapt to their wall construction. Just the way it should be in trade."

Time planning has also become more flexible in Fahrenkrug. On the one hand, this means that even at times of high utilization the company can react quickly to tightly scheduled requests. On the other hand, it means that the production sequences can be better planned, allowing Hamdorf to meet promised deadlines: "That gives both me and my customer comfortable additional security."

The latter also applies in terms of costing, which has become much easier for Daniel Hamdorf since every component - even a complicated component such as a round bat dormer - goes through the automated production: "With automated production we can plan the processing times much more precisely, even complex details are much more clearly defined in terms of cost. Today, we solve the problems relating to complex components in the work preparation rather than at the work table. That gives me as a business owner costing security, which the customers also benefit from because I can offer them my products at fixed prices."

That is a significant market advantage, particularly in the supply business — one of the reasons why this area has grown at a disproportionately high rate at the Hamdorf carpentry since 2009.

Small businesses that consider timber work as a professional main pillar are their best customers and approximately every two weeks, someone from this range of customers comes along to look at the modern production system. "The technology then becomes a marketing argument. When a customer looks at how we operate, it becomes clear to them that they can have a finished rainproof house in one or two days if they buy all the elements from me."

Daniel Hamdorf therefore generates significantly higher sales in the company (in terms of percentage) and less at construction sites. Overall, the proportion of timber panel construction production has increased from 8% in 2008 to 40% today.

"Profitable" also for the employees

The investment has also been "profitable" for the employees of the carpentry business: "They are more motivated at the construction site because assembly, even for complex components, is quicker and smoother thanks to the greater precision and a higher level of prefabrication.

Life has also become easier for the employees in production because these components now run easily through the system whereas before, the employees had to rack their brains about them."

For Hamdorf, who was also once a journeyman in element production, this is a very pleasing side-effect: "I really wanted to improve the working conditions in my company with the automated production. That's why the panel suction devices were important to me, for example."

The working environment at the Hamdorf carpentry has also improved. Today, in Fahrenkrug, work takes place in a bright, well-equipped hall, which both the employees and the company itself benefit from. Hamdorf will therefore find it easier to recruit new employees if he needs to when extra personnel is required.

The master carpenter also—correctly—sees a direct connection between employee satisfaction and component quality: "We also benefit from an employee-friendly workspace because we can only produce products to an optimum level of quality on a permanent basis if the employees are motivated." A corporate concept with a promosing future: The hall already has space for future extensions.

Handcrafted design, reliability, quality and some good advisory service are the philosophy of the enterprise Hamdorf. Our state-of-the-art production halls give us the flexibility to meet your needs. Skilled crafts and trades in combination with modern high-tech production create the basis to be your future partner.

As one of the leading carpentry businesses in North Germany, we currently employ 46 people who generate revenues of approx. 6.5 million Euros.