A coffee with two old hands. 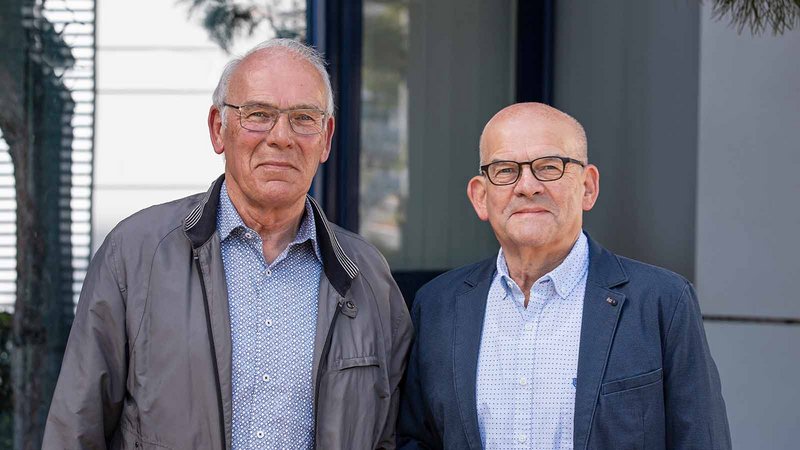 Peter Kortenjan and Hugo Voß significantly contributed to the development at the Herzebrock plant.

The HOMAG Group would never have become what it is today if it had not been for the help of many hard-working hands along the way.
Two of those people are Hugo Voss and Peter Kortenjan, who reflected together on more than 75 years of experience with the HOMAG Group. In a convivial atmosphere, they chatted about old times and had one or two anecdotes to share. They proudly showed old photos and brochures that they had brought with them, mementos that documented all of the milestones of their professional lives.

Hugo Voss joined Weeke in 1976 and helped to shape its success right up until his retirement in 2013. Starting in design, in 1986 he became plant manager before becoming part of the business management in 2002, a position he continued to hold until his retirement. He refers to the cooperation of Weeke with HOMAG as a big and important step. "Up until the mid-1980s, Weeke was a manufacturer of special machines and had a very small range of series products. Many of the machines were unique pieces. It was only through the collaboration with HOMAG that the company moved away from manufacturing special machines and into series production, with a small, customized range of special requests."
The sales network of HOMAG also provided a big benefit.

"We young people should stop bringing in new-fangled stuff."

An important and decisive step was the changeover of the company's own production to CNC technology, which was new at the time. Some older colleagues found it difficult to let go of things that they had come to love over the years. "The first thing we had to do was push the new CNC technology through against the old masters," he says smiling.
They told us that "we young people should stop bringing in new-fangled stuff." But the tenacity paid off and the company's own production was changed over to CNC technology. Programming the machines using perforated tape, something which is barely even imaginable today, was a thing of the past, and the change from NC technology to CNC technology was made. Production was now faster and more precise.

Overall, he can look back on a very pleasant period. He is grateful for the opportunities that he had at the very beginning as a young employee. There was a lot of development and a lot of progress. But he also reflects fondly on his later years in business management and the HOMAG Group that had then become more merged. Asked about his predictions for the future, he says spontaneously and with full conviction that "HOMAG is the strongest player on the market. We are large, technically fit and innovative. We are very well set up for the future."

"It was always a great team and a super package."

One companion of many years is Peter Kortenjan, who in February 1978 signed at Weeke almost by chance thanks to a word-of-mouth recommendation. "An acquaintance from the gliding team gave me the tip that there were jobs going at Weeke. As a young, freshly trained engineer, I was naturally grateful for the information." "A good decision" that was to influence the progression of his professional life, he recalls with a happy expression. He spent the first four years up to 1982 as a designer, before then becoming manager of development and design at the Herzebrock site, continuing in that position until his retirement in 2015. In particular, in his first years after joining the company in Herzebrock, it was possible to work freely and creatively without any specifications and restrictions. "Looking back, that time had a big impact on me because, as a young engineer, I had the opportunity to try a lot of things out, to think freely and in that way to learn a lot."
At this time, there was an order for a customer in Asia. The objective was an automatic feed for a drilling system through which drilling was to take place vertically from below. This challenge was overcome with freshly thought-out processes and plenty of creativity.
Peter Kortenjan refers to the further development of the BST 100 throughfeed drilling system and the development of drilling spindles that can be accessed individually as milestones and a "leap forward." "At the start, we sold 1000 drilling spindles each year. At the end of my active time with the company, it was 30,000." The large rate of increase in the number of spindles sold fills him with pride at having been involved in a significant further development for Weeke and the HOMAG Group.

Hugo Voss and Peter Kortenjan also look back fondly on trade fairs and exhibitions. They had already been important in the past, and in the 1970s and 1980s, before globalization and the digital age, Ligna in Hanover was an obligatory event, even more so than it is today. It was the only place to get a good look at and size up the competition. "Here, we could always see whether we had worked well in the last two years. There was no other way to do that at the time," they explained, almost apologetically. But the success of first Weeke and then the HOMAG Group justified what they and their colleagues had done. They always aced their homework.

For Peter Kortenjan and Hugo Voss, working at the Herzebrock site was to some extent like a family that they enjoyed being part of. The creative work and the feeling of really being able to design still fills them with joy and pride to this day. Peter Kortenjan even talks about it as being a dream job. "It was always a great team and a super package," he says, full of praise. "So it wasn't difficult to develop ideas and creative solutions."
Both look back on this time and their work together with the fondest of memories.

Portrait of an employee: Alexander Hakimov

Portrait of an employee: David Gildea

Portrait of an employee: Hartmut Vöhringer