Use of Robots in a carpenter’s workshop 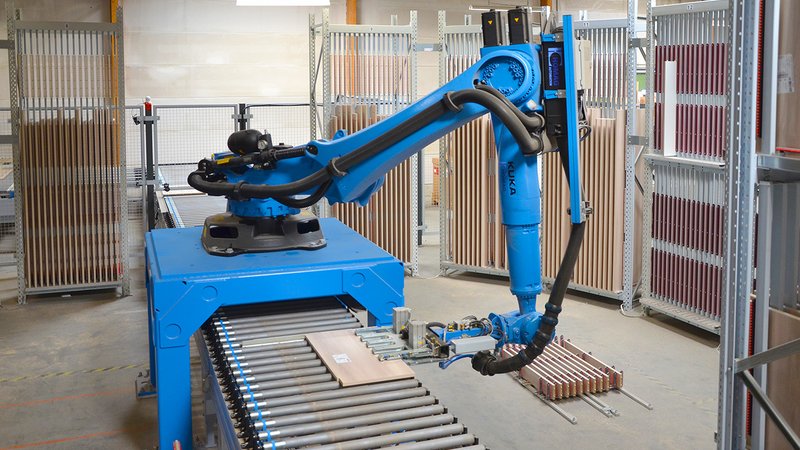 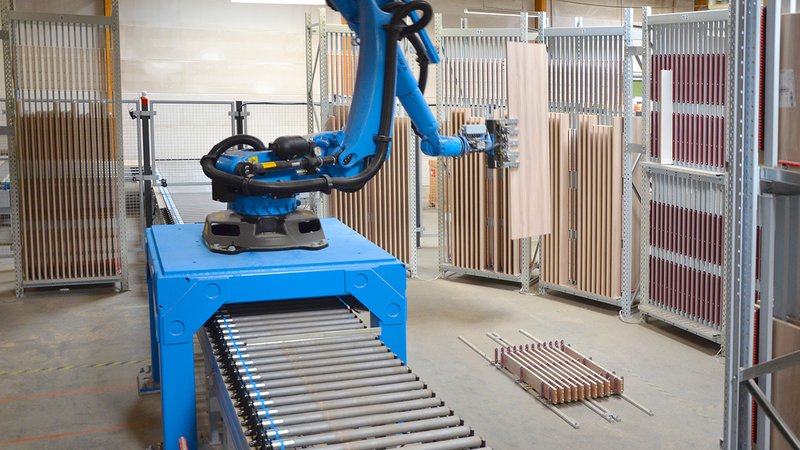 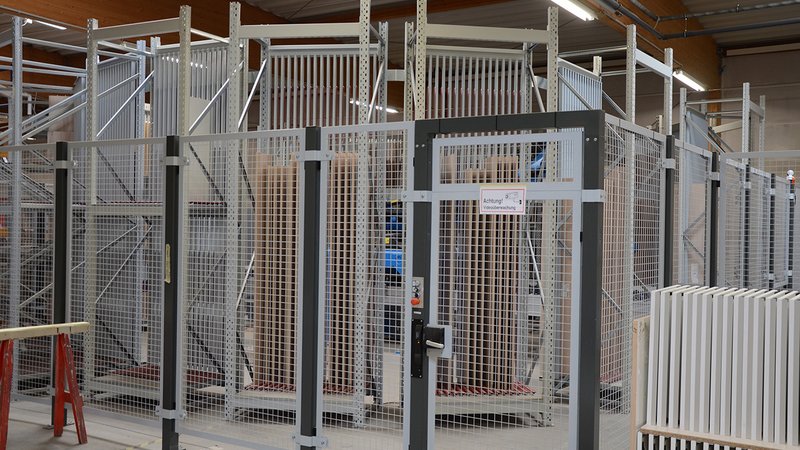 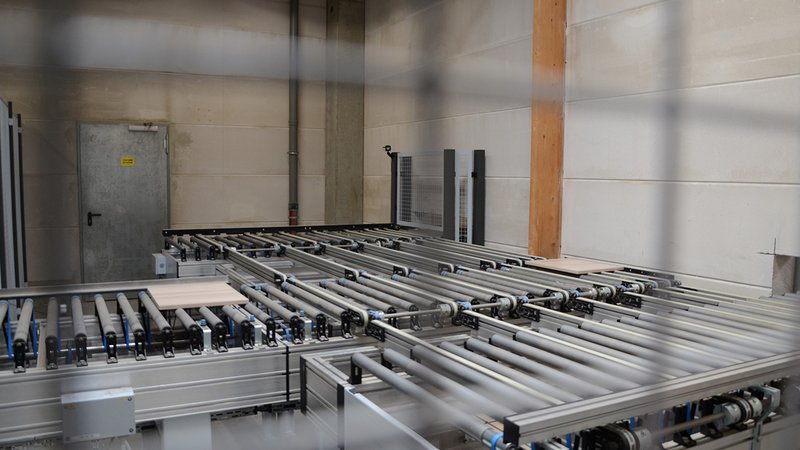 The robot receives the order from the cell computer to put the part into the shelf - or to let it pass, because it is immediately required.

When the robot receives the order to pick up a part, it runs with it 6-axis kinematics and its “hand” to the right shed.

Rear view of the eight shelf elements that offer space for 500 parts.

Behind the robot two roller conveyors with transversal transport are installed that feed an assembly and a special line with parts.

The floor plan of a robot cell illustrates the circle shaped arrangement of shelf elements, which are available in different types and which follow the range of the robot.

I was inspired from the robot solution with the sorting storage to decouple different production flows. It fits perfectly to my production.

An article from the specialist magazine HK, 03/2017. Here you can read the article on hk-magazin.com.

The career of the sorting robot started with the LIGNA 2015. It operated in the center of a circle shaped shelf system at the HOMAG trade fair stand, to temporarily store furniture parts of panels and to provide for an optimum material flow in the assembly. Today, such a model stands at STARKE Objekteinrichtungen in the Saxon town of Schönbach. HK got an on-site impression of this very rare form of automation in the craft sector.

“When I saw the robot at the LIGNA 2015 at the HOMAG trade fair stand, I knew immediately that this is the optimum solution for us”, tells Torsten Starke, Managing Director at STARKE Objekteinrichtungen GmbH. The robot cell with the circle shaped shelf system is ideally suited for his company. Starke wants to sort parts for the assembly to bring them in the right order. However, he needs buffer storage between part production and assembly, because the optimum process of cutting-to-size saw and edge banding machine cannot be automatically transferred to the assembly. In principle, each furniture manufacturer has this problem - intermediate storages and collating carriages are the usual solutions. But Torsten Starke wanted more: more flexibility, more process safety with higher throughput and more storage capacity with less manual work.

Exactly that is what the robot cell offers. Here, all furniture parts are temporarily stored, which have been provided with and edge and equipped with all necessary drillings directly in front of the sorting cell. The furniture parts will arrive at the center of the circle shaped shelf system over a driven roller conveyor. Here, it is decided which way the part will take.

The robot receives the order to put it into the shelf, because the cell computer exactly knows which part is arriving at the robot that is positioned there. Or the robot shall let it pass because it is immediately needed in the assembly. Then - and this is the specialty of the cell solution at STARKE Objekteinrichtungen in contrast to the LIGNA presentation - the part will simply be transported to the assembly, because the robot passes beneath the robot, which stands as onto a bridge. If the part will only be needed later, it will be stopped and the robot takes is with its “hand” - a special gripper with twice five fingers - and deposits it into a free place of the shelf system that is organized chaotically.

Since at STARKE only one roller conveyor runs through the circle shaped shelf system, it is possible to arrange each eight shelf elements on the left and right side providing place for a total of 500 parts. Three different types can be selected for each element - one, two or three stories with two different material thicknesses (16 to 19 mm and 19 to 26 mm), which are determined customer-specific due to his part mix.

So, the robot has direct access to each stored part, which enables an optimum material flow thanks to freely determinable storing and removal strategies. In the case of STARKE this means that the robot has to store and remove three parts per minute. When the robot receives the order from the cell computer to take out a certain part, it will run with the 6-axis kinematics and its “hand” to the correct shed, “takes” the desired part and deposits it behind itself onto the roller conveyor, so that the part can be transported towards the cupboard assembly. But which of the two roller conveyors is the right one? The identification of the part determines its way and the cell control “knows” the right way. Serial parts are fed to the assembly line and special parts to the special line. Each of the two lines has its own wall throughput and in front of it a transversal transport. Shelves that have not to be drilled or sorted run over the special line. Special formats in individual production or low quantities, as well as all work steps such as glue application and hinge placement are carried out manually.

The situation at the assembly line 1 is different. Here, an “MLK” is located upstream that applies the glue automatically CNC-controlled in the dowel holes, plunges bottom beams, and places and screws in cross plates. Only the carcass parts are put together manually and pushed into the carcass press.

The finished carcasses will be packed and leave the production via four loading ramps, whereby the STARKE workers will load the four loading bridges according to the tour and on time. The forwarder will pick up the loading bridges, drives through the planned tour and delivers the furniture on time. At the end of the process chain the benefit of the computer controlled production at STARKE shows up. All parts - own furniture parts, external delivered parts and all hinges and merchandise - are produced and ordered according to the delivery time. There is hardly any stock, the horizontal cut-to-size saw HOLZMA HPP 300 profiLine cuts the parts timed so that the edge banding machine can directly process them. After the drilling machine the parts are buffered in the sorting storage by means of robot handling, in order to optimize the material flow.

Such a consistently continuous computer-controlled production, as Torsten Starke realized, can very rarely be found in the handicraft sector.  The use of a robot cell with sorting storage is even more exceptional. With Torsten Starke, HOMAG Automation was able in summer 2016 to name the first operator who put into practice the application exhibited at LIGNA 2015. Did a tech freak snap the chance here, or is there a reliable profitability calculation? “I was inspired from the robot solution with the sorting storage to decouple different production flows”, explains Torsten Starke his investment decision. “It fits perfectly to my production.” Before, he was battling with roller conveyor and transversal carriage systems. Of course, the parts that were currently needed had been positioned further back - cumbersome maneuvers shaped the agenda.

A lot of precious time was wasted - and the wish to expand the project business seemed to be unrealizable with this system. Therefore, the robot cell is not an eccentricity for him, because it pays off. However, Torsten Starke is not able to mention a specific payback time, because the robot cell is only one part of the total investment of 1.4 Euro that was spent for the semi-automatic drilling and assembly line with robot cell. In each case it is an investment in the future, because it enables Starke the targeted growth.

Direct access to each workpiece, and that fully automated

Robots are the crucial key to higher productivity and more efficiency. This is also the case at STARKE…