Master of the workpieces

With the sorting assistant, Mario Esch now has an overview of all his workpieces. His workshop is fully digitized from measurement to assembly. 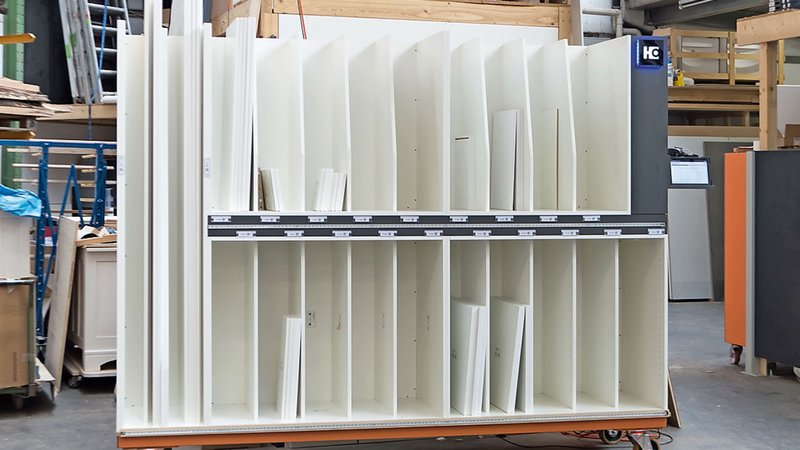 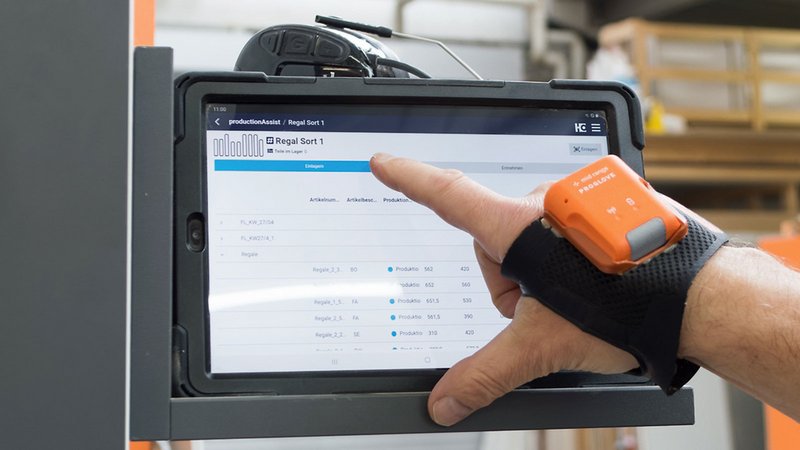 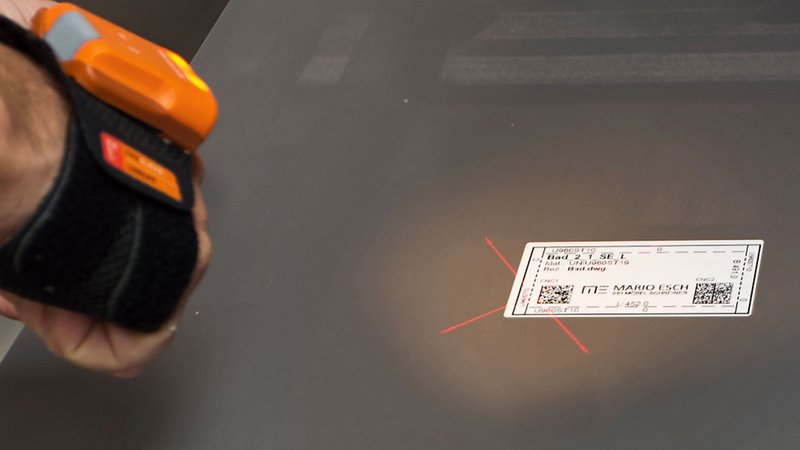 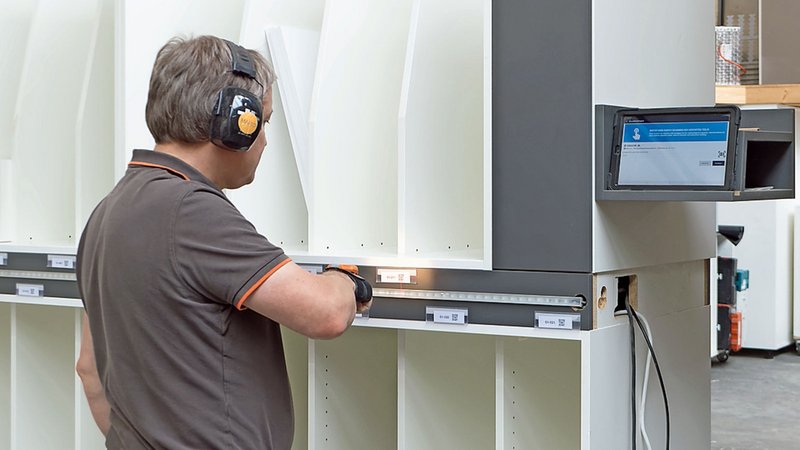 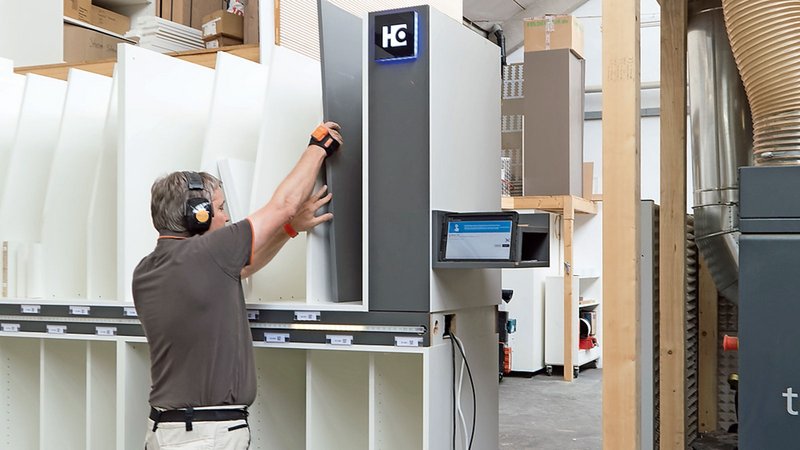 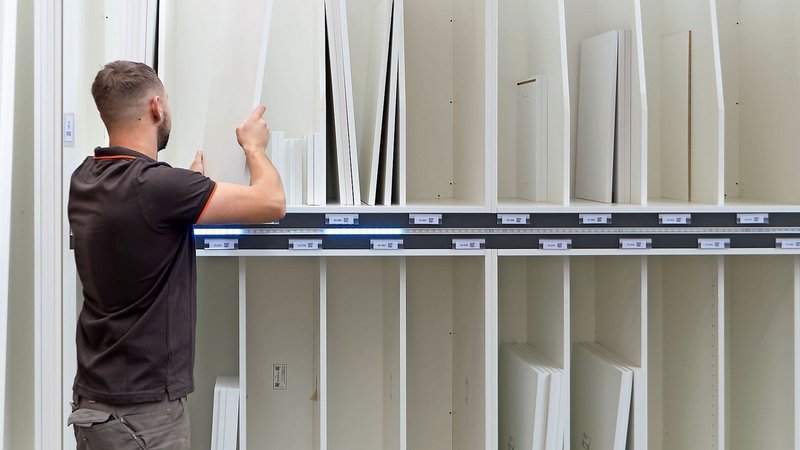 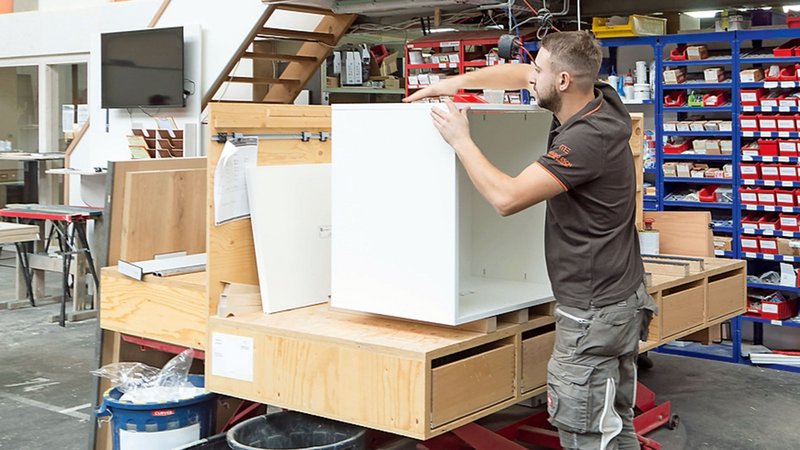 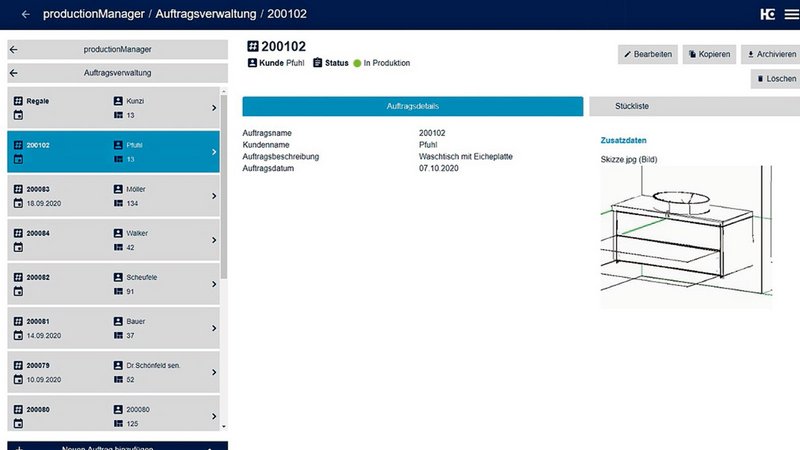 The sorting rack was assembled in the carpentry itself according to the HOMAG construction diagram.

This tablet with the productionAssist Sorting app serves as a control panel for the sorter. Mario Esch taps "return to storage".

While the workpiece is passing through the machine, Mario Esch uses his glove scanner to read the QR code on the label.

Instead of the compartment suggested by the system, Mario Esch wants to use a different one. He therefore scans the label of the desired compartment...

...and places the workpiece he has just removed from the edge banding machine inside.

Blue light strips show him the parts for the next cabinet.

...for complicated furniture, taking a look at the productionManager app tells him what he needs to know.

Nesting increases material and production efficiency, particularly in smaller businesses. The workflow runs smoothly and without any problems – but often only up to the edgebanding machine. Beyond that, it's a matter of searching, counting, searching further and hoping that the batch is complete. To improve their workflow and efficiency, Mario Esch now uses a digital sorting assistant.

On his right hand, Mario Esch wears a glove with a laser scanner the size of a matchbox on the back. The device projects a red laser cross forward. In his six-person business, the master joiner stands behind the edge banding machine and directs the laser cross onto the QR code label of the workpiece that is coming toward him. Before the part reaches the machine outfeed, he activates a switch in the palm of the glove with his fingers and scans the code. Behind him there is a movable sorting rack with around 30 compartments. On the compartment at the far left on the bottom, a white LED strip lights up. This is the compartment that he should place the workpiece in. However, Mario Esch would prefer to insert it at the far top right. No problem. He directs his scanner to the label on the desired compartment, presses the switch and the strip at the top right lights up instead of the one at the bottom left.

Sorting assistant behind the edge banding machine
For two years, Esch has been using nesting and has implemented a continuous data flow from measuring the dimensions, through the CAD/CAM system and the nesting machine with a separate production control system right up to the edge banding machine. He likes to bundle identical panels into production jobs. However, it was no longer possible to manage the quantity of parts that arose in random order behind the edge banding machine manually. In his search for a remedy, Mario Esch came across the sorting project from HOMAG and TH Rosenheim. At the beginning of the year, he joined the project as a pilot user of the sorting assistant.
If, after sorting the part, Esch were to scan the label of the compartment, the color of the light would change to green and the insertion in the storage system would be booked. However, he saves himself this work step. Instead, the system records the last component sorted as sorted into the recommended compartment when the operator scans the next workpiece to be sorted.

Booking takes place automatically
At the machine outfeed, Mario Esch receives one workpiece after another. The workpieces belong to different jobs, including the Pfuhl job, which is to be delivered tomorrow. He sorts the parts that are not to receive any further edging strip into the selected components without stopping the edge banding machine. He places the other parts on a pallet truck for return transport to the machine infeed.

The assembly batch is complete
Edging is completed and now it's journeyman Lars Selig's turn. His task is to glue all of the cabinets that belong to the Pfuhl job. Before he starts, he looks at the tablet that is placed at eye level on the right of the sorting rack. It offers an overview of the production status and serves as a control panel for the sorting rack. The productionAssist Sorting app reports that all parts are ready for assembly. Lars Selig pushes the sorting rack to his work station, taps "Remove" and selects the job. Cabinet by cabinet, the sorting assistant identifies the compartments with the cabinet parts currently required with a blue light. Once a cabinet has been completely assembled, Lars Selig requests the components for the next one on the tablet.
Naturally, as a pilot user, Mario Esch did not have to buy the "Sorting Production Set," available via the HOMAG homepage. The set contains a one-year license for the apps "productionAssist Sorting" and "productionManager" (= digital job folder). It also contains the construction diagram for the sorting rack, two LED strips and the HOMAG CUBE as the control unit.

Plug-and-play
Mario Esch built the rack according to the diagram and activated the apps via the tapio platform. He also set up his CAD/CAM system so that it transfers the parts list to the productionManager app via the XML interface. He didn't have to worry about installations, the data structure and computing power – all that is organized by HOMAG and tapio via the cloud in real time: plug-and-play. All the user needs is Internet-compatible end devices. Just a few days after completion of the rack, the sorting assistant was put into operation.

Digitalized up to assembly
Mario Esch says "I'm really enjoying being a pilot user in this project. A lot of the work runs just like I imagined it would. We now finally have an overview of what happens after the edge banding machine and only now are we digitalized consistently and completely from stock through to assembly. Searching, counting, searching again and hoping that the batch is complete now all belong in the past. We just need to refine one or other of the processes."

You are interested?
Feel free to send an inquiry via the HOMAG eShop…

...or send an e-mail to DigitalFactory@homag.com

Every part has its place – with our assistant for the sorting of furniture components.

Your central component for the digital workshop.