Terhalle Holzbau GmbH invests in automated production in order to be able to increase its capacity and to be able to produce in batch size 1. 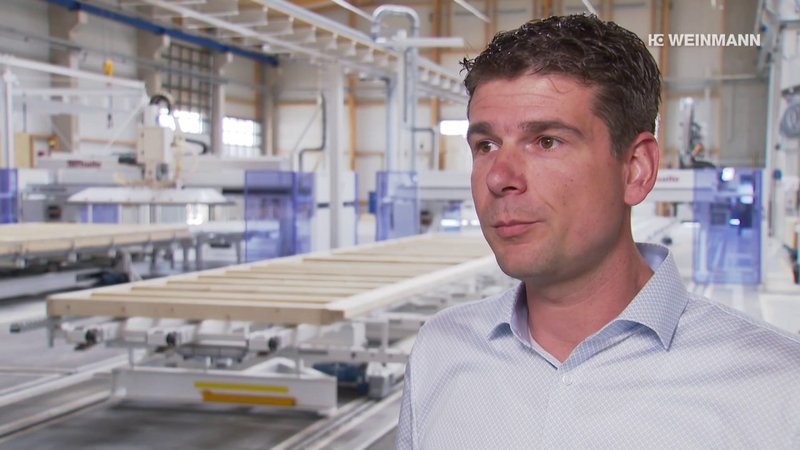 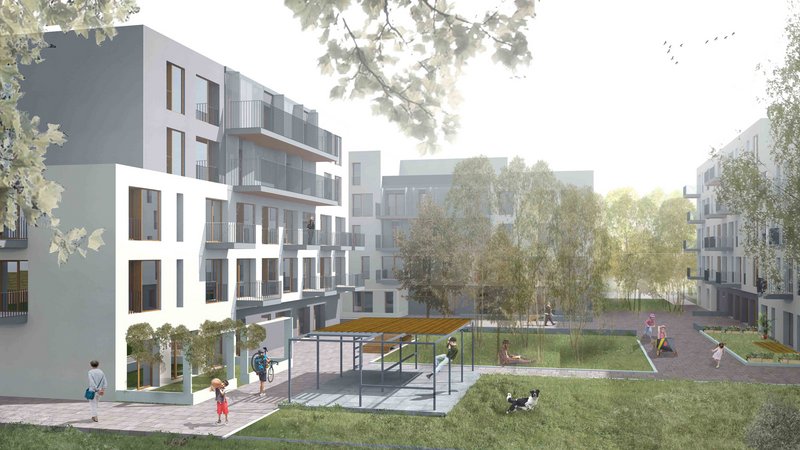 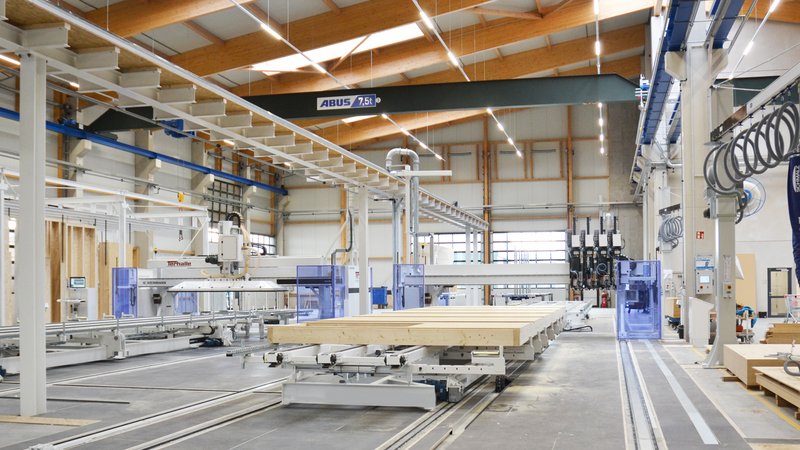 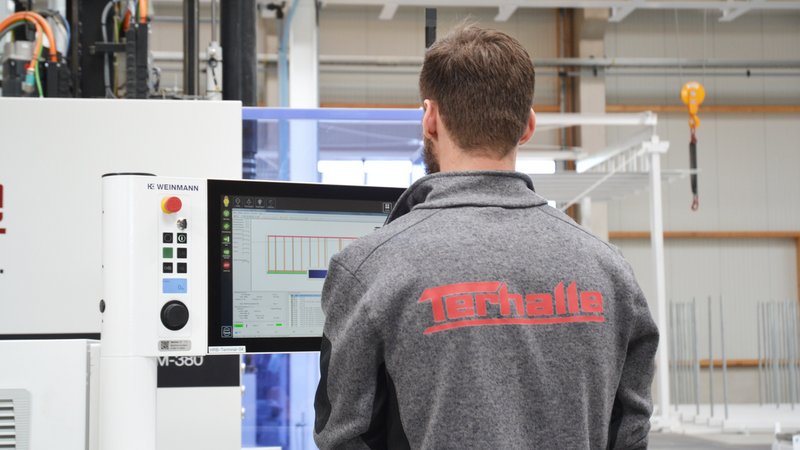 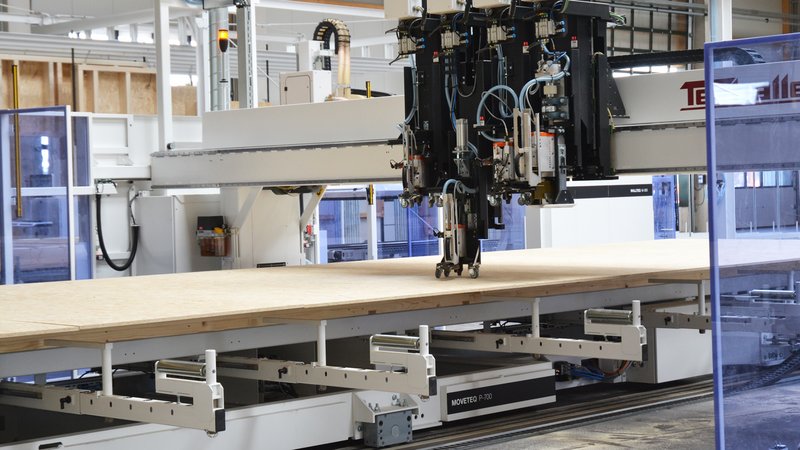 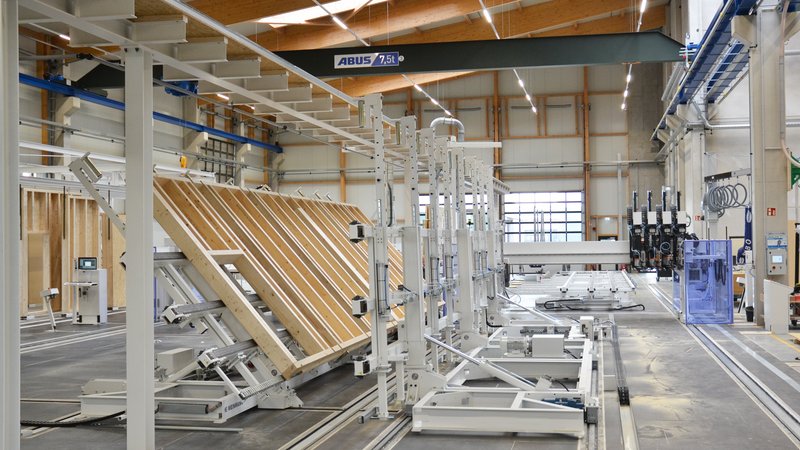 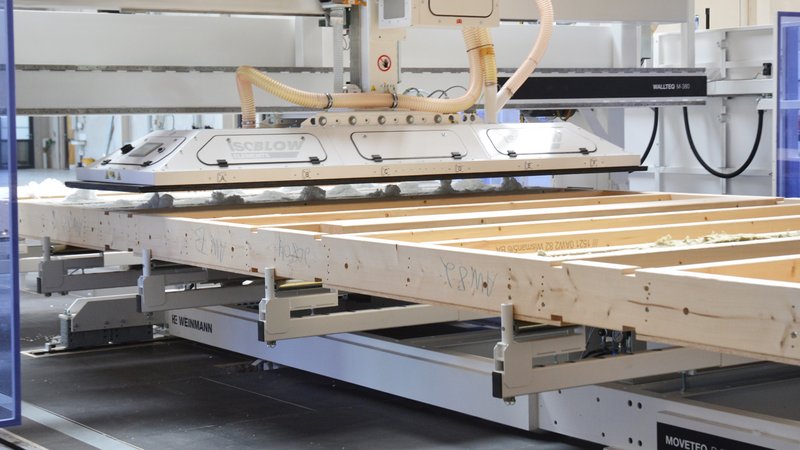 "The fully automatic insulation also gives us a significant increase in speed and quality."

Because Terhalle Holzbau GmbH was no longer able to process the volume of orders with manual production methods, the company invested in automated production. As well as increasing capacity and the quality of components, the focus with this investment was on the ability to produce flexibly in batch size 1 and to insulate components automatically.

The company is currently producing one detached house per day in Ahaus, Germany, which equates to approximately 30 percent of the sales from timber work. Commercial construction makes up a large part of the product range. In the Weißensee district of Berlin, Terhalle has been working with Quartier WIR to carry out what is currently Germany's largest timber work project. The wide range of business areas - commercial and timber construction, interior fittings and window upgrades - shows that the production lines in Ahaus offer very different elements. Consequently, when the company was looking for an automated production line, flexibility was high on the list of specifications, especially since the company takes account of customers' wishes in the designs and often produces in batch size 1. The company was also interested in increasing the level of prefabrication and improving the quality of the workplace. Company founder Josef Terhalle says: "It goes without saying that we too are feeling the current lack of skilled workers, even though we train people ourselves and many of our trainees stay with the company. This means that the automated production line is also an overture to our employees."

After inspecting various production lines, management decided on a four-table system from WEINMANN. At the heart of the system is a WEINMANN WALLTEQ M-380 multifunction bridge, which is supplemented with a WALLTEQ M-380 insuFill machine. This second multifunction bridge, which is equipped with a blow-in plate, serves as a pure insulating station. If necessary, it could be equipped with two additional clamping devices to increase capacity in the short term in order to handle peaks in demand.
The insulating station makes the production process significantly more flexible because the insulating material can be changed more quickly. There is a choice between cellulose and mineral fiber as the loose insulating material. The automatic insertion of insulation has proven to be very efficient - employees no longer have to cut and insert the insulating material manually, and the process is fully automatic. Additional savings can be made in storage and logistics as the company no longer has to keep various insulating material formats in stock and the insulating material is transported to the insulating station via a hose line. An interesting side effect is that, from a cost perspective, cellulose insulation is significantly cheaper than mineral fiber. Companies that use a blow-in function can therefore offer their customers environmentally friendly insulation at an attractive price.

Project manager Frank Lewers, who was prominently involved in modernizing production in Ahaus, sees further benefits of the new technology in terms of added value for the company: "We not only save on employees in the classic insulating process, we also save on subcontractors that we previously used for blowing-in on the construction site. In those cases, we also used external parties to apply the last internal sheathing on the construction site. Today, we do both of these activities in-house, and we have increased the level of prefabrication and shortened the assembly times."
The conditions are similar for window installation - this is now done in the new production facility, which has been equipped with a 192 m wall slot system for wall elements for this purpose. This allows the company to complete large projects, such as the residential quarter in Berlin, or a current construction project in Hanover, for which the company will soon be supplying 2500 m2 of wall elements. Since the changeover in production, curtain walls have also been preassembled in the factory to shorten the assembly times in this area too.
Because special elements currently still run via a manual production line, the entire production process in the plant is organized via the Manufacturing Execution System (MES) from granIT. This enables the company to collect components from various production lines and put them together on a project-by-project basis. By automating the creation of multiwalls, Terhalle aims to increase utilization of the tables and consequently the productivity of the system by around another 30% in the future.

Terhalle decided on a separate insulating station in Ahaus to significantly streamline the cycles within production even further: "With the WALLTEQ M-380, we can clamp and process the element sheathing much faster and much more precisely than previously," explains Frank Lewers. "The fully automatic insulation also gives us a significant increase in speed and quality. Although the investment was higher due to the separate insulating bridge, the cycles are tighter and the output therefore greater." The latter is particularly important because the company's aim is to increase production by 20 percent in the medium term, and by up to 50 percent in the long term. The initial signs look very good: just three days after installing the production line, the company had used it to produce the first kindergarten. For Frank Lewers, the qualities of the system are already clear to see: "By processing the sheathing automatically, we are gaining speed and precision. In the future, we will be able to produce a higher quality than is possible with manual production."
This applies to the insulating station too: "Following the initial trials, we can already clearly say that the blow-in pattern is excellent. And we don't just know this - we can also prove it to our customers using the blow-in log." The new production line is therefore creating the best conditions for extending the company's good reputation further in the region.

Terhalle was founded in 1986 as a carpentry firm and has since grown to be a medium sized company employing over 240 men and women. The manufacture and assembly of the first houses using the timber frame construction method started in 1992. Due to growingdemand, they have been erecting turnkey buildings since 1995. Since 2007 the product range has been expanded to include the manufacture of windows and facades.

The WALLTEQ M-380 blowTEC can not only process timber elements - with an integrated blowing plate, it also…