Healthy indoor climate, pleasant scent and built in a few days. Homes made of wood are on trend. The Austrian company Griffner specializes in sustainable prefabricated houses. 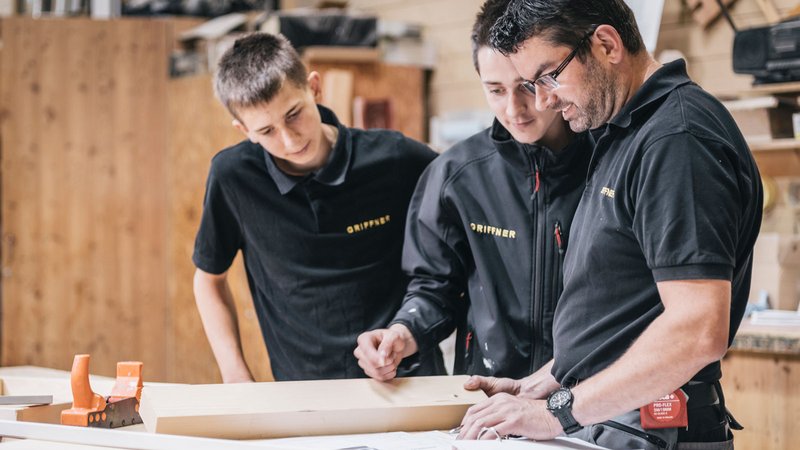 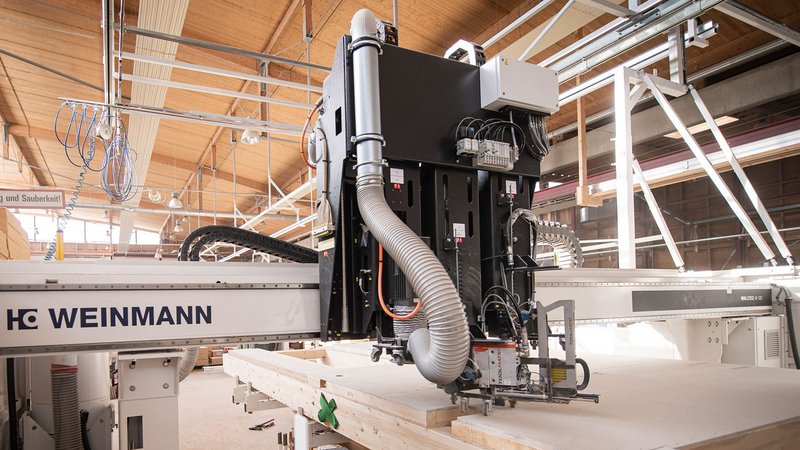 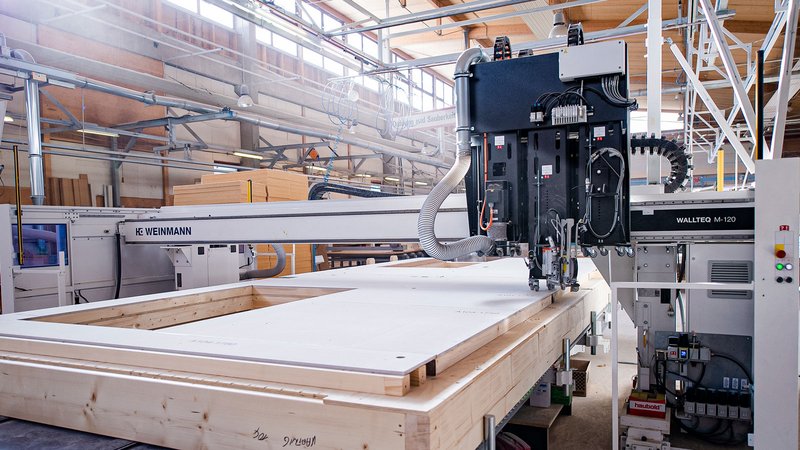 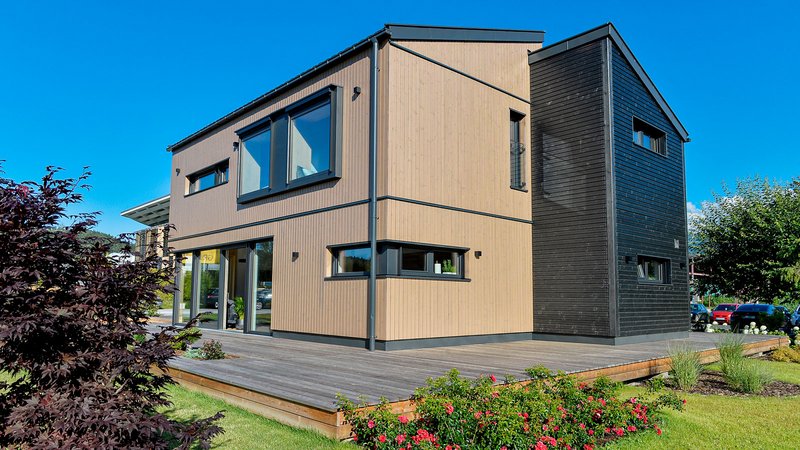 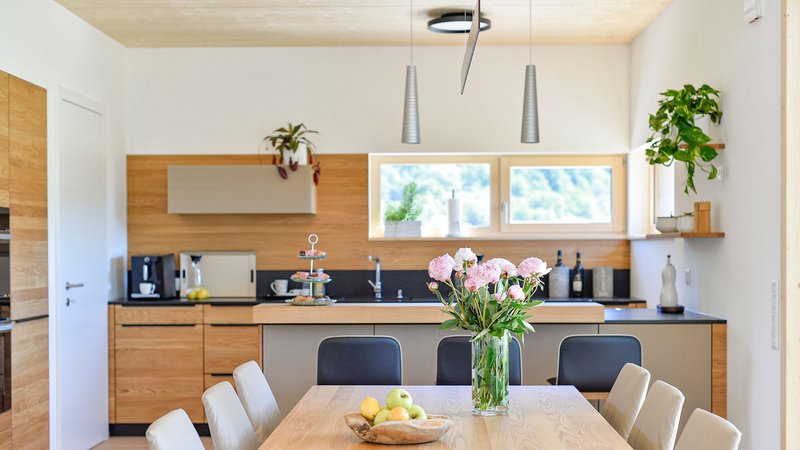 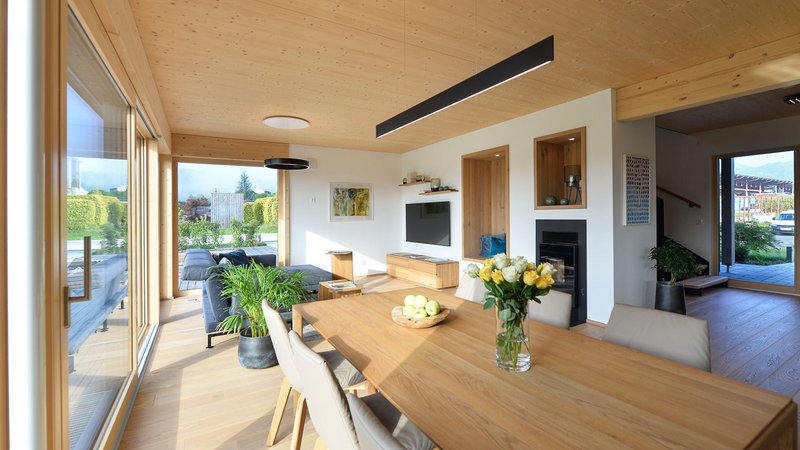 With around 100 employees, Griffner produces 100 houses per year at the company site in Griffen. Source: Griffnerhaus

The multifunction bridge WALLTEQ M-120 is part of the production line of Griffnerhaus. Source: Griffnerhaus

Griffner manufactures around 100 houses a year. It takes just a few days to produce a house from raw wood. Source: Griffnerhaus

In Austria, one in three new single and two-family homes are made of the renewable raw material wood. Source: Griffnerhaus

"With the additional insertion table we were able to eliminate a bottleneck, which can reduce the cycle time by almost a third."

Machines from WEINMANN ensure fast and customized production. It is clear that Griffner are all about wood. Saws are buzzing on the factory floor, it smells like spruce chips. Beams support walls and roofs. The external walls of the company buildings are covered with wood. Bright floorboards decorate the floors in the offices. There's no doubt about it: this Austrian company is all about wood. A half-hour drive from Lake Wörthersee, Griffner builds prefabricated houses that are very special. "We work exclusively with natural materials," says CEO Georg Niedersüß. Everything is ecologically and environmentally certified and concrete and metal are only used in exceptional cases. Production is also sustainable. The company processes sawdust into pellets to fuel its own heating system. The vehicle fleet is made up of electric cars, the boss himself drives a Tesla. Niedersüß has his own style: a shirt and jeans, rather than a suit, with a three-day beard finishing off the look. He describes himself as "a conservative, capitalist green." This attitude was probably one reason why he took over the insolvent company, Griffner, eight years ago. Previously, he had run DIY stores as a franchisee, selling them to a large chain. But he didn't want to live on wealth. He preferred to run an ecological prefabricated house supplier. After his studies, Niedersüß wanted to become an architect, but then decided to study economics. Of course, he had sleepless nights after buying Griffner, he admits. Until he was able to hand over the first home to the customer. That was liberating.

A finished house in a few days

Today, Griffner manufactures around 100 houses a year. The 100 employees plan the projects together with the customers, buy wood from nearby forests, cut it in the workshop and make walls, ceilings and roofs from it. Trucks drive the finished components to the construction site. It takes just a few days to produce a house from raw wood. There is no comparison to traditional building methods, where bricklayers need months to put up walls of bricks and cement. Wood is the building material of the future – of this Niedersüß is certain. Especially in Austria, where half the country's land is covered with trees. One cubic meter of wood grows every second. That's enough for more than 2000 single-family homes per day! Even with regard to climate change, there is no alternative to wood for the boss at Griffner. Each cubic meter used absorbs one ton of CO2. It is removed from the carbon cycle for a long time, because in sustainable forestry, fallen trees are replanted immediately. The cement contained in conventional concrete construction, on the other hand, is a climate killer with a devastating ecological balance. The cement industry alone accounts for around eight percent of global greenhouse gas emissions. Austria is already feeling the consequences. The government program provides special support for the use of wood in public works in the future.

But do wooden homes stand for long enough to save CO2 in the long term? Niedersüß nods. "If they are well protected against wet conditions, they can be 200 to 300 years old." There are wooden bars in Norway that are more than 1000 years old. Used wood can also be recycled very well.  That's why more and more people are choosing to build with wood.  In Austria, one in three new single and two-family homes are made of renewable raw materials, says Niedersüß. In Germany, it is one in five – and the trend is rising. There are now even high-rise buildings made of wood – for example in the east of Vienna. The wooden high-rise building has 24 floors is 84 meters tall. There are also modern, imposing wooden buildings in Norway, Germany, Japan, Canada and the USA. Among them are not only high-rise buildings, but also bold archways, reminiscent of cathedrals. In 2020, Griffner built a villa with 500 square meters of space for a Ukrainian client in Burgenland. As a rule, however, the company's homes are oriented toward more open models. "We want our customers to know what they are getting into," says Niedersüß. He offers information evenings in model home settlements and anyone who wants to can spend a weekend trying out life in a wooden house in Styria.

Griffner homes are characterised by large rooms, large windows and plenty of light. For the initial orientation, the manufacturer offers various building styles, to inspire families constructing their homes. You can do everything, but nothing is a must. The specialists at Griffner produce customized solutions according to the customer's wishes. The process is structured and planned from the initial idea right through to handing over the keys. As a result, the disputes between spouses typical of home building should not occur at all. Niedersüß is convinced: "Couples who choose a Griffner home stay married longer."  The boss wants to get to know his customers as personally as possible. "This helps me to have an even better understanding of them." The pleasant ambiance indoors created by the natural materials used, is also often mentioned. The external walls are insulated with wood fiber and cork, in addition to a layer of natural plaster. "This allows us to achieve significantly better heat protection than other prefabricated houses," says Niedersüß. In the winter, more heat will be retained, saving heating energy. Studies have backed this up. A 20-centimeter thick, prefabricated wooden wall filled with insulation material provides just as much insulation as a concrete wall that is five times as thick.

On the way from the office building to the production area, there is a view of wooded mountains as the spring sun feeds photovoltaic systems on the roof of the hall. Inside, there are brand new machines and plants for constructing prefabricated house elements. Since Griffner is at capacity with orders for the next year and a half, it is important to produce walls, roofs and ceilings as efficiently as possible. "If I can increase production by ten percent, I notice the difference immediately in sales," says Niedersüß. For decades, the company has been relying on technology from WEINMANN. The men and women in the production department first build the frame work on the assembly table. The multifunction bridges then mill openings for windows and doors in the wall element. Special machines blow insulating material into the cavities.
22 years ago, the old owners bought new WEINMANN systems for the last time. They were still working, but had one disadvantage: the software was no longer up to date. Therefore, Griffner decided to replace the machinery. The WEINMANN project managers planned another insertion table. "This meant that we were able to eliminate a bottleneck, which can reduce the cycle time by almost a third," says Niedersüß.
In addition, the production of the roof and ceiling line was automated. This process also uses a multifunction bridge. Today, Griffner manufactures wall, roof and ceiling elements with a high degree of prefabrication. This allows the home to be assembled even more quickly on the construction site. The decision to choose WEINMANN was not difficult for Niedersüß. "We have had good experiences with the company." The machines are also versatile and the price-performance ratio is ideal. Now that the new machines are running, Niedersüß has more time for another important project. For 23 years, he has lived in a conventional brick house, 25 kilometers from the company's headquarters. Since the children have now grown up, he wants to move with his wife — into a healthy, sustainable Griffner house.

The company Griffnerhaus GmbH is located in Austrian Griffen a half-hour drive from Lake Wörthersee. For more than 40 years it plans and builds premium prefabricated- houses in timber construction with around 100 employees. The efficient dealing with energy and ecological awareness is important for the company. This is why only local timbers from sustainable forestry are used.