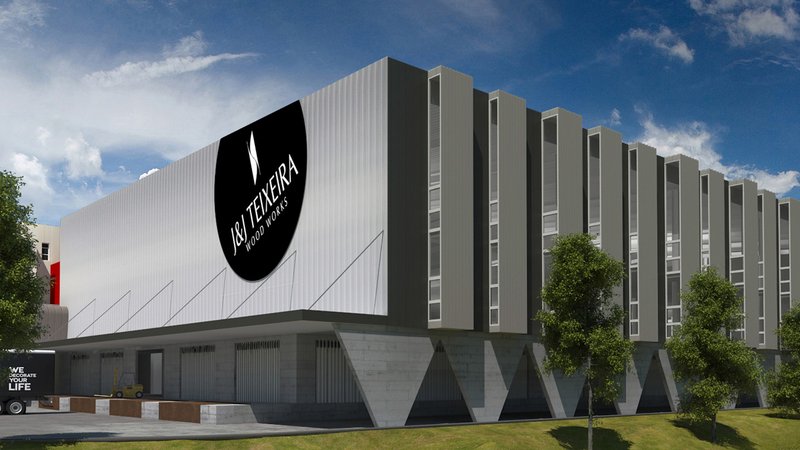 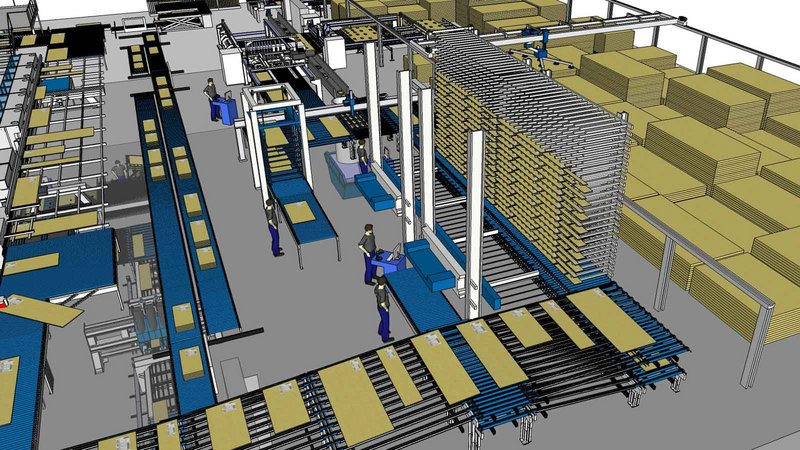 Also the production planning and machine installation within JJ Teixeira follows in the layout.

An article of the trade magazine HK, issue 2/2016. Here you can read the HK Magazine online.

Although other countries such as Greece or Spain received most of the attention, the euro debt crisis also left its mark in Portugal. Despite the numerous corporate bankruptcies and a youth unemployment rate of more than 30 percent, J&J Teixeira is beating the odds.

In 2014, the interior design firm made a thoughtful decision and invested in a highly automated batch size 1 system.

It was in 1977 when João Teixeira, together with six employees, founded J&J Teixeira Joinery. The number of employees grew steadily and in 1980 the first factory hall was built in Vila Nova de Gaia, a city in northern Portugal. Over the years, the company has become one of the largest interior designers in Europe.

Today, J&J Teixeira is firmly anchored in the project business. Everything is made to customer specifications and in batch size 1. The production is designed for furniture with melamine coating and veneered or lacquered surfaces. In addition to built-in wardrobes, bathroom and kitchen furniture, the company also manufactures construction elements such as doors, floors, windows, wainscoting and wall cladding.

The economic crisis of recent years did not pass without consequences for J&J Teixeira, however, thanks to the new projects, the gap was rapidly closed. During this time, the company also found the opportunity to expand towards African countries such as Angola. Overall, the required capacity of J&J Teixeira is on the rise and has gained more volume in recent years.

In 2014, the decision to plan a highly automated batch size 1 system turned out to be the right one. However, the starting position for planning and procurement was not easy. The objective of the investment was to shorten delivery times and significantly reduce personnel costs. At the same time, production errors were to be reduced while increasing the quality of the parts . The capacity target was 2,000 parts per shift, but because the existing property did not show the optimal opportunity for this batch size 1 system, the company chose to plan the production in the new building. The basic product data was available, however, with the required flexibility, the data provision for the various machines and transport systems needed to be completely rebuilt.

Production planning was closely coordinated with the desired machine supplier, HOMAG Group. In order to accomplish the production conceptincluding adjustments to the automation, many agreements and discussions were required, not only for this project, but for future developments as well.

It was clear that the machine technology and its selection could only be part of SCHULER Consulting’s work. One of the challenges of the project was how to transfer the right data to the production plant without errors, in order to achieve the planned performance. This highly networked production with few manual activities required reliable information for each individual part. Every machine - from the saw to the edge bander and the automatic drill – requires unique data, which had to be regenerated and provided for each part. In addition, every conveyor belt, buffer and sorter also required part dimensions, as well as rules and logic for transport, storage and retrieval. The challenge of generating and transferring the data consistently, without error, is what made this project so demanding.

SCHULER Consulting implemented the manufacturing execution system (MES) "Wood Factory" for the specific data transfers and production monitoring. The system was specially designed for the requirements of the furniture industry allowing any machine and system component to be integrated with it. Rules are defined for all parts in the “Wood Factory” system, for example, controlling the right aggregates on the edge banding machine or  diverting specialized parts to different machines and systems. The software provides the corresponding data and transfers them to the system components with simple interfaces. These interfaces are available for the various system manufacturers.

Just one year before the installation of the plan, SCHULER Consulting, together with J&J Teixeira, defined the connection to the ERP system ("Oracle"), as well as the layout of the part labels, production routes, work sequences, and interfaces to the individual machines. Soon after, the first data tests were carried out to minimize the errors during the operation.

At the beginning of 2015, the first machines were installed and tested in a live environment. On the top floor of the new building, the storage area for panel materials was installed. This storage area included a single saw and a large angle system. In order to keep the material waste at a minimum during panel cutting , orders with the same raw materials (panel thickness and decorative surface) <s>are</s> were batched and passed on to different production routes depending on subsequent manufacturing processes. This is one of the reasons why J&J Teixeira relies on "Wood Factory".

The comprehensive production process starts at the angle saw where the parts are created. After cutting, the parts are fed to the edge banding machines in O-mode where they receive up to four edges. Regardless of dimension or edge color, the edgebander receives the parameters of the following part via barcode and retrieves the corresponding data in the database. This is the most crucial part of the entire process, and what makes it a batch size 1 production. After the edge bander, the components are stored in a sorter. The software controls the outsourcing process from the sorter and thus the sequence of parts that are transported to the two drilling machines. After drilling, the finished parts are handled by the employee for the first time. The time-consuming manual labor is eliminated with this production concept, greatly reducing the number of employees needed. For such a manufacturing plant, a maximum of five to six employees are required.

The test process for each individual machine and link could be completed by summer of 2015, with direct support from SCHULER. The customer’s wishes for production control were integrated and errors in the database were eliminated. Currently, the full process between work preparation, raw materials and machinery runs at maximum efficiency.

The right production concept, sufficient buffering of parts, sorting and defining part orders - are the key parameters of such a task.

As a link between the customer and machine suppliers, SCHULER Consulting played an important role in this project. With the use of production control and data provision by "Wood Factory" this task could be performed efficiently. A win-win situation for everyone involved.

J&J Teixeira has achieved the desired goals with this system. The quality of the parts has increased and the error rates are gradually decreasing. Even though the part production is larger than anticipated the capacity limits have not yet been reached. The desired flexibility has made it possible to reduce the lead-time from five days to twelve hours. The flexibility and short delivery time are the main reason for the investment. The customized product possibilities in combination with quick delivery times gives the company a clear market advantage that many companies dream of.