The next step — but certainly not the last.

Since spring 2021, the Bantli joinery in Eschenz, Thurgau, Switzerland has been using a DRILLTEQ V-500 CNC processing center with robotic support provided by a FEEDBOT D-300. 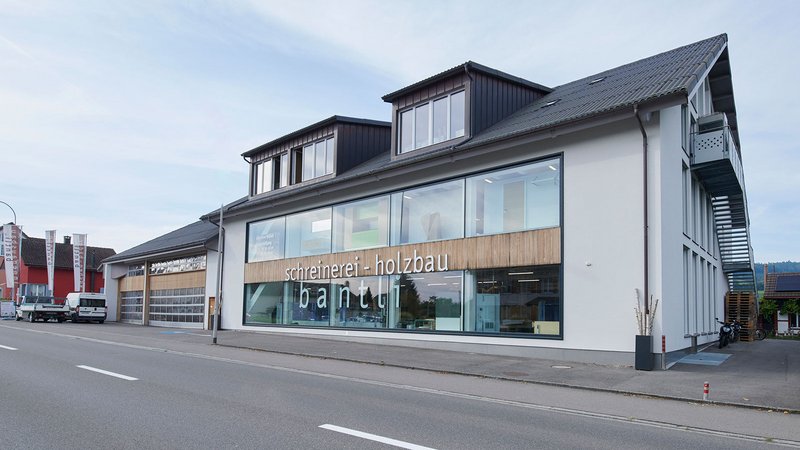 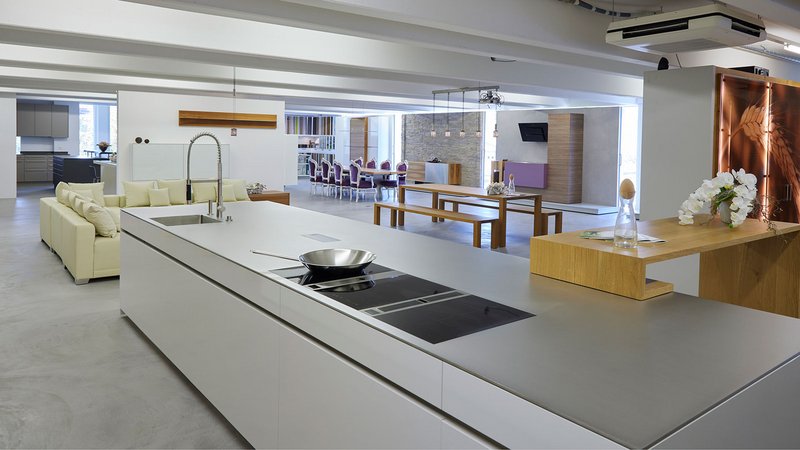 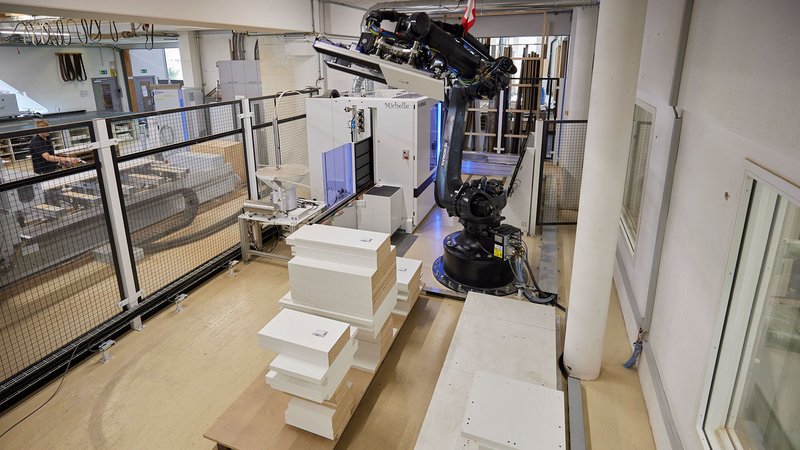 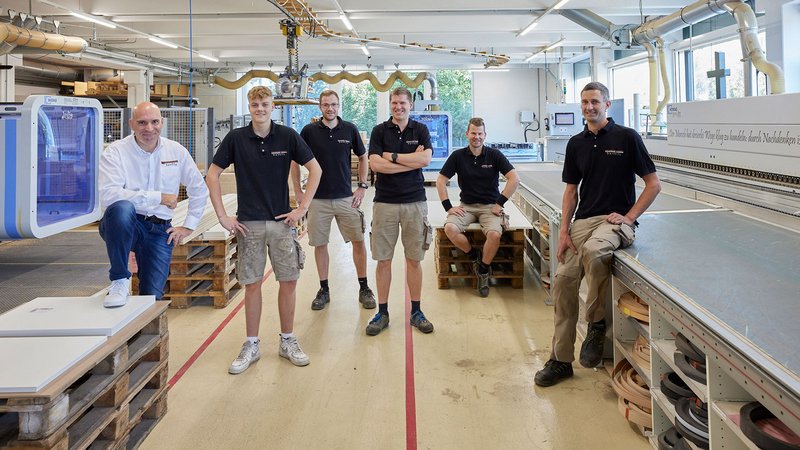 The 500 m2 furniture and interior furnishings exhibition opens its doors in 2014.

The unstaffed processing cell from DRILLTEQ V-500 with FEEDBOT D-300 in action.

Oliver Bantli with some of his happy and highly motivated team.

"People are our most important asset, not the machines."

No two orders are the same for Oliver Bantli and his team. Ranging from small repair orders to demanding extensions and large projects, he and his employees cover everything — working at the highest level, to the agreed deadlines and putting their heart and soul into it. Genuine carpentry. In 1982, Martin Bantli founded a joinery in Eschenz, Thurgau, Switzerland. Right from the very beginning, customers were won over by the master carpenter's work — business ran smoothly and the company continued to grow. By the end of the 1980s, the joinery had become renowned and ten employees were working there. Oliver Bantli—the founder's son and master carpenter—joined the company shortly before the turn of the millennium. Oliver was given free reign by his father Martin, initiating the gradual modernization of the company — with CNC and CAD laying the foundations. Since 2003, Oliver Bantli has continued along this path as the sole managing director. Today, the small joinery has become a modern family business with 50 employees, a spacious showroom, a branch near Zurich and a sophisticated machine pool. But one thing remains the same: the carpenters' attention to detail.

This is exactly what customers appreciate, regardless of whether the project is a neighborhood in Eschenz, a large bank in Zurich or a hospital in Thurgau. The Swiss company's portfolio is diverse: restaurants, offices, banks and hospitals; doors, floors, windows, stairs, roof structures and furniture; interior fittings, kitchens and bathrooms — the more demanding, the better. This allows the carpenters to continuously develop and means that employees never become bored in their work through dull mass production, which is particularly important to Oliver Bantli. This variety can also be seen in the work process. Machine operators don't just work on one HOMAG machine. Instead, they accompany the workpiece from cutting until it is completely machined and ready for further processing in the assembly area. As a result, interface problems have been eliminated. — these have always been a thorn in Oliver Bantli's side.

Communication barriers during production have become a thing of the past thanks to the machine operators accompanying the workpiece, but what about data integration in the rest of the operation? Oliver Bantli already took care of this in 2007. At the time, he simply didn't want to accept that he had to enter the dimensions, values and quantities for an individual project into the system at different points over and over again. With the introduction of 3D CAD, it was possible to program a solution that has been continuously tweaked to this day. Real pioneering work that has paid off. Data integration saves all employees time and stress. For example, the Thurgau-based company generates wood lists and CNC programs directly from the 3D plans and production runs smoothly thanks to barcode scanners on the HOMAG machines. It makes sense that the company has a digital solution for capacity planning and time recording too. All employees can see current projects and responsibilities on large screens. Once an employee has completed their job, they just have to put a checkmark next it using their smartphone or PC when entering their hours. This allows the project managers to easily keep track of the situation. And the machines run in perfect sync!
The raw material is delivered to the front of the building, on the main road, and the finished furniture is dispatched from the back. Loading is done in the weather-proofed underground garage.

The smooth and rational production process is essential for Oliver Bantli, because even if the customer is willing to pay the price for top quality goods, the costs must not be infinitely high. That's why the joinery uses HOMAG technology from the saw to the edge banding machine, and right the way through to the CNC machine. Oliver Bantli likes to be ahead of the game here too and is currently using the DRILLTEQ V-500 with a robotic arm. It produces structural parts—at a faster pace than before—and can be operated automatically on both sides if necessary. The four machine operators can oversee other projects, while the DRILLTEQ can drill cabinet walls or kitchen panels unstaffed and simultaneously attach dowels or CLAMEX trimmings. One of the great advantages of the CNC solution for Oliver Bantli is that his skilled workers can carry out other important tasks thanks to the robot, which had already sparked an interest at LIGNA 2019. Less than two years later, the idea became a reality. In part, thanks to HOMAG employee Roy Müller, who commissioned DRILLTEQ in May 2021. According to the joinery owner, it is also thanks to Roy and his attention to detail that there were no problems with the installation. Despite the robotic arm, the vertical CNC processing center only takes up a small amount of space for processing structural parts. During this process, Bantli AG benefits from vacuum-free clamping technology, rapid drilling and the clamping system, which do not require any setup time.

But as satisfied as Oliver Bantli is with his machine pool, he makes one thing clear: it doesn't work without good staff, the people make the company what it is. They are the life and soul of the company.

For this reason, the managing director also places great importance on a healthy working environment. Strengths are strategically promoted and weaknesses are consistently worked on. If someone is interested in a particular project, they are welcome to get involved. This enables the team to develop as a whole — and consequently the company too. This is exactly what the Bantli joinery has done in recent years, leading to several exciting projects being handled there. For example, a few weeks ago a pharmaceutical company opened a branch at  THE CIRCLE, a futuristic new center at Zurich airport. All the interior fittings of the office landscape were manufactured by Bantli AG in record time. It was a real mammoth project for the company — the deadline was tight and there were also delays caused by other suppliers. During the critical phase, up to 19 fitters were working at the same time. But against all odds, the deadline was met. After all, "When Bantli agrees to a deadline, Bantli sticks to the deadline." As well as this large order, the traditional joinery has also fitted out several hospitals, banks and Internet companies in recent years. However, Oliver Bantli doesn't only want projects of this size.

Private contracts account for 30 to 40 percent of Bantli's work: from small repair jobs at the neighbor's to solid wood work, and all the way through to extravagant villas with saunas shaped like a shipwreck. No two orders are the same and, as demanding as the work is, the men and women at Bantli get it done. They take pride in their work and would not settle for anything less. It doesn't get much better than receiving a sincere thank you from customers because the employees in Eschenz am Rhine are not ones to rest on their laurels.

The future: the next ideas are already in the pipeline.

Oliver Bantli isn't a fan of waiting around — he thinks ahead and drives forward. This is what characterizes his partnership with HOMAG. For 16 years now, he has put his trust in the machines and solutions from Schopfloch and has constantly provided feedback for improvements. This is also the case with DRILLTEQ,

as he is working on a solution to create order out of chaos together with the specialists at HOMAG Switzerland. Using a photo cell and artificial intelligence, he wants to make production even more efficient and to make life easier for his machinists.

In addition, a new workshop for the carpentry department is currently being built. Oliver Bantli is also further expanding the heating system, as the wood waste from the joinery is used to heat not only the company premises, but also 18 houses in the neighborhood. The company also generates a large proportion of the electricity it uses itself. This is sustainability in practice and the owner wants to continue to show this in terms of growth. It should be healthy and by no means forced. Oliver Bantli would much rather help his employees to develop and spark enthusiasm for demanding projects. It is not for nothing that seven apprentices are currently learning the trade in the family business. Because no matter how highly developed and innovative the machines are, employees are the future.