Affordable living space in a large city? There’s no such thing! This is the experience of people who are looking there for somewhere to live. 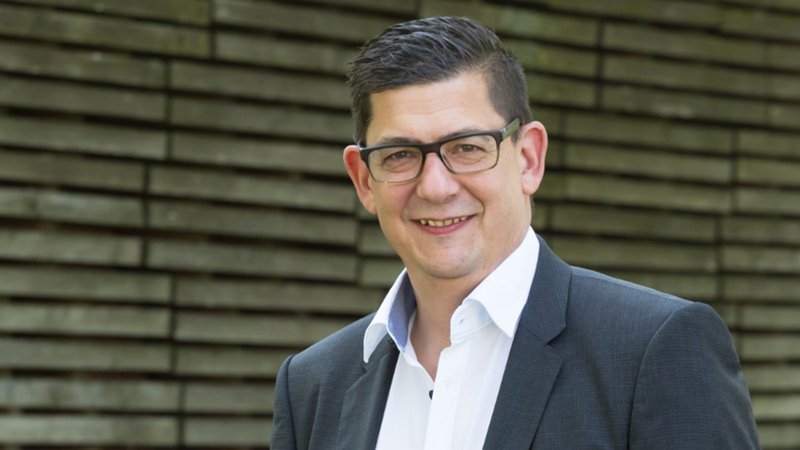 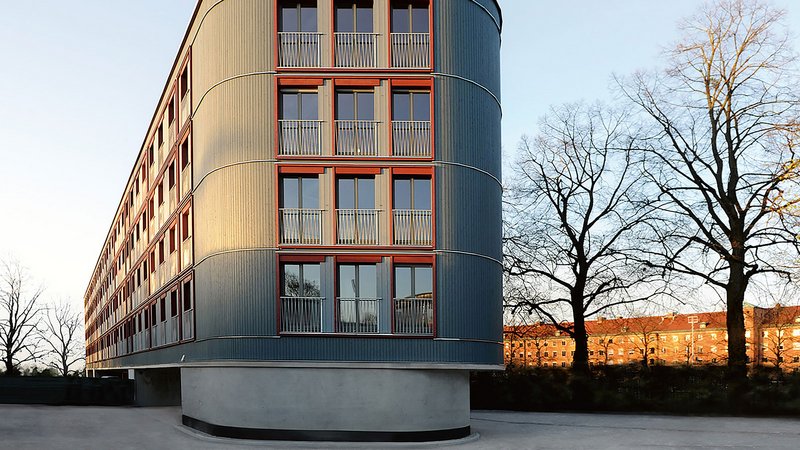 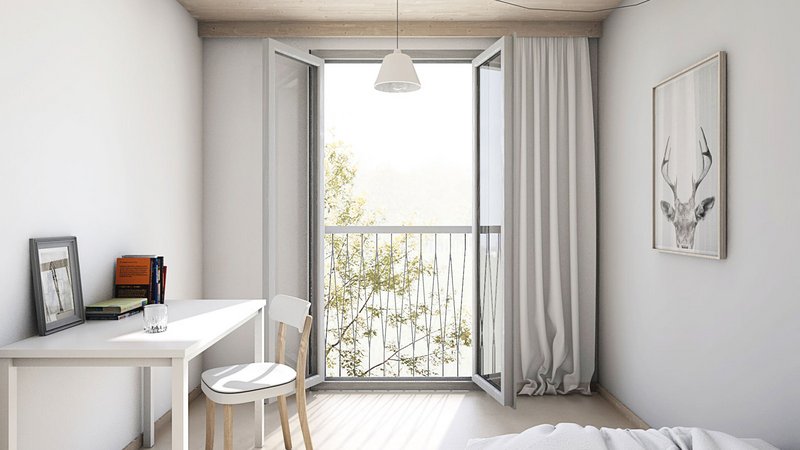 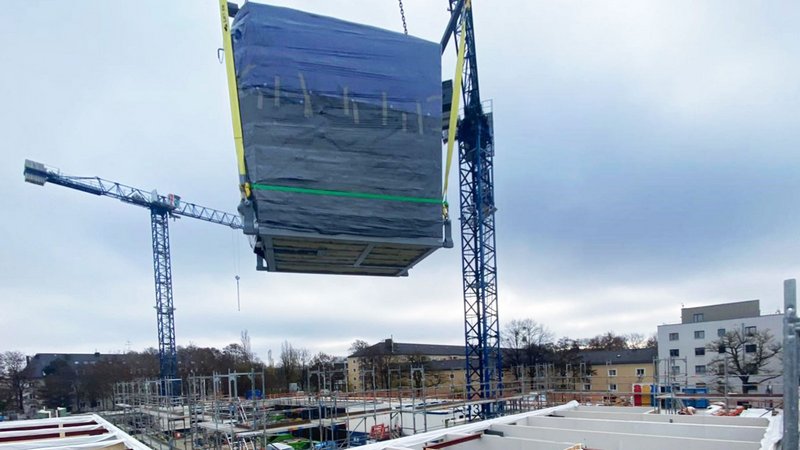 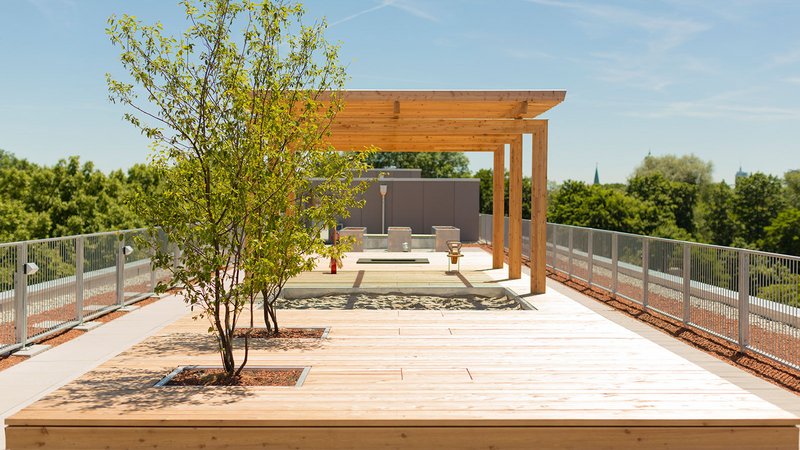 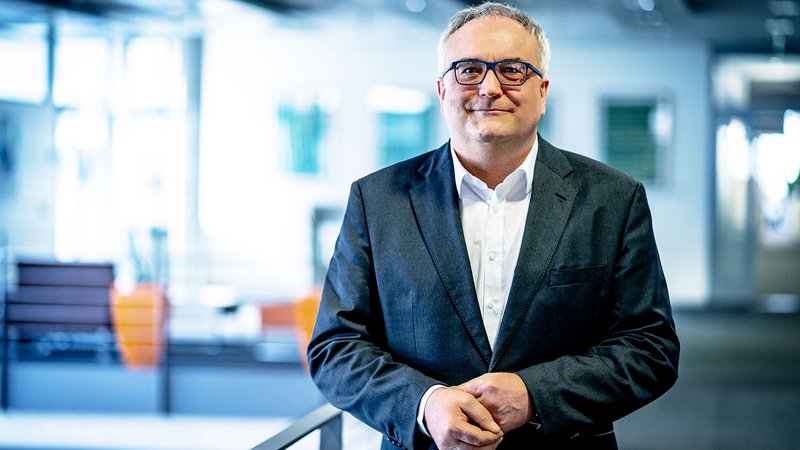 The four-story building rests on stilts above an existing car park. This means no natural ground had to be sealed. Image source: B&O Group

In the building at the Dantebad you live not only on stilts, but also in a cozy wooden ambience. Image source: B&O Group

In prefabricated timber construction, cranes lift the assembled components into place within minutes. Even complete bathrooms can thus be installed into the building. Image source: B&O Group

The roof terrace of the residential building next to Munich’s Dantebad is a welcoming place to unwind. Image source: B&O Group

“If we use wood in the right way structurally, its durability is extremely high.” Josef Zerle, Managing Director at WEINMANN

“Going forward, we want to build in a more and more standardized way.”

An article from the Eco magazine of the Dürr Group 2022. More information can be found here.

The B&O Group is not prepared to accept this. Bringing fresh ideas, it constructs new apartment buildings within a very short time frame. In doing so, it relies on the sustainable raw material timber — and systems offered by HOMAG's subsidiary WEINMANN. Hiding behind a row of trees, the facade has a plain elegance about it — and yet, this four-story building next to Munich’s Dantebad swimming pool is the flagship of the B&O Group. The building, comprising 111 apartments, firstly consists for the most part of timber; secondly, it rests on stilts above a car park; and thirdly, it was erected within just six months. For Uwe Dohrn, Managing Director of B&O’s timber construction segment, this is an ideal combination. “This way we have created sustainable and affordable living spaces in Munich’s metropolitan area within a very short time frame.”
The company from the Bavarian town of Bad Aibling, which was once a roofing firm, over time developed into a service provider to the housing industry, with sales of half a billion euros. The objective of B&O is to radically reinvent the culture of house construction. “Today, buildings are still erected using a high proportion of manual labor,” says Dohrn. This is slow and expensive. B&O therefore relies on prefabricating solid-wood walls and ceilings in factories in a standardized way, and assembling them on site. The building next to Dantebad is a result of this method. However, producing high-quality walls and ceilings in series requires first-class technology. B&O relies on systems made by world market leader WEINMANN. The HOMAG Group’s subsidiary has been providing equipment to carpentry businesses and factories for timber construction for years, and is expanding this business that continues to grow.

Prefabricated houses made of timber are on trend. The market for systems used to produce timber construction elements is growing by more than six percent a year. Around every fifth new house in Germany is being manufactured using this sustainable raw material. Every cubic meter of timber used in buildings binds one ton of CO2, which is thus removed from the carbon cycle for a long time. And more wood is growing back than is required today or will be required in the future. Sustainable forestry ensures that every felled tree is replaced by planting a new one. The eco-balance for conventional concrete and brick construction, by contrast, is considerably worse. The B&O Group went into timber construction when it first extended houses by building another story to create additional living space. “This lends itself mainly to metropolitan areas, where real estate is at a premium,” explains Dohrn. Conventional structures made of brick or concrete are not suitable for this due to their heavy weight. Timber, on the other hand, is so light that the structure of the house can cope with an additional story. Adding density to existing built-up areas in this way is a popular method, especially in large cities such as Munich. More living space is thereby created without the need for any additional building land. Experts have been pointing out for years that undeveloped land is a natural resource which must be protected. According to estimates, an area the size of 122 soccer fields is being built on every day in Germany. This restricts the habitat of plants, animals, and microorganisms. Whereas so far, mainly one- and two-family houses have been built of wood, an increasing number of multi-story buildings are now being constructed with this natural material. B&O is one of the pioneers in this field. “Around ten years ago, we built our first four-story timber house,” says Dohrn. It was part of a building project on the land of a former army barracks in Bad Aibling, where all buildings were constructed using timber. The experience gained back then has since been used in other projects.

A house on stilts

Lack of space was an important incentive for building the 115-meter-long house next to Dantebad for the city of Munich. The existing car park there had to be preserved for legal reasons. Erecting the building on stilts was therefore an obvious idea. This left enough space under the house for parking for use by the residents or the visitors to the neighboring swimming pool. Another advantage: The parking area was already sealed. Not one square meter of natural ground had to be turned into building land. The building owners could also dispense with an underground car park. The architect in charge was familiar with timber house construction and had planned all rooms in a way that allowed for the facades and ceilings to be machine-made without any problems. As he decided against any unnecessary frills and many parts looked the same, production using the WEINMANN systems of a B&O partner company proceeded quickly. A novel building method also helped to keep the construction time short. To make sure the workers didn’t step on each other’s feet, the planning was based on a staggered approach. The various different tradespeople worked their way from one side to the other. While on the right-hand side the shell of the building was already finished, work at the left end was still going on to complete the concrete platform that would support the timber structure. The interior work progressed in an equally systematic way. Windowsills, roller shutters, and conduits for electricity and water already came prefitted in the timber elements. Even fully fitted bathrooms, complete with wash basin, shower, and tiles, were lifted into place within a matter of minutes using a crane. The result: All interior rooms were finished five weeks after the building shell had been completed.

A preference for solid wood

The common practice in timber construction is to use so-called timber frame construction elements. To this end, the frames for the wall are assembled in the factory using different-sized timbers and enclosed with panels of wood or other sustainable materials. Multi-function bridges subsequently cut out the recesses for doors, windows, and ducts. The remaining cavities are then filled with insulating material and are also enclosed with recyclable panels. B&O, by contrast, prefers prefabricated solid-wood elements. This means the walls are made up of thin wooden strips, also known as studs. In factories, these are placed side by side until a continuous wooden structure is created – and thus a load-bearing solid-wood core. This method has a significant advantage: The lengths of the individual studs are chosen to ensure that the intended openings remain free. “Windows, doors, and ducts therefore don’t need to be cut out at a later stage, which would usually be the case,” says Dohrn. This saves around 20 percent of the material used. WEINMANN has adapted its systems for this type of manufacturing. “We all brainstormed together to find the best way,” says Josef Zerle, Managing Director at WEINMANN. The careful use of resources was also at the forefront of these discussions. Timber construction elements can be reused when the building has reached its end of life. And this can take a long time, according to Zerle. “If we use wood in the right way structurally, its durability is extremely high. Evidence of this can be seen in timber buildings that are still standing after several hundred years.”

Creating living space that is both durable and affordable is one of B&O’s primary goals. “Going forward, we want to build in a more and more standardized way,” says Dohrn. This starts as early as the planning. “What happens today is that architects design buildings and only later think about how they can put their ideas into practice structurally.” This is followed by a planning process, which costs time and money. “It makes more sense if all the data required to build the necessary parts in the factory is available right from the design phase.” The digitalization of the entire process plays a vital role in this. Does that mean all houses will look the same because of the use of standard elements? According to Dohrn, this won’t be the case. Arranging the elements creatively will still provide for variety and individuality. He sees automakers as an example. They use a modular system to build very different models using identical platforms. B&O firmly believes in the potential of timber construction and is investing in its own factory in Frankfurt/Oder. There, the company is planning to manufacture patented solid-wood elements using automated series production. The HOMAG Group is also on board: Its subsidiary Schuler Consulting has supported B&O in the factory planning, while WEINMANN is delivering the production systems.

The B&O Group was founded more than 60 years ago as a roofing firm and developed into a technical real estate service provider. Today, B&O is driving the development of timber construction for multi-storey buildings and employs 2,300 people at 30 locations.