Step by step to success

Growing step by step is not only more manageable from a financial perspective, it also minimizes the risk from fluctuations in the market. 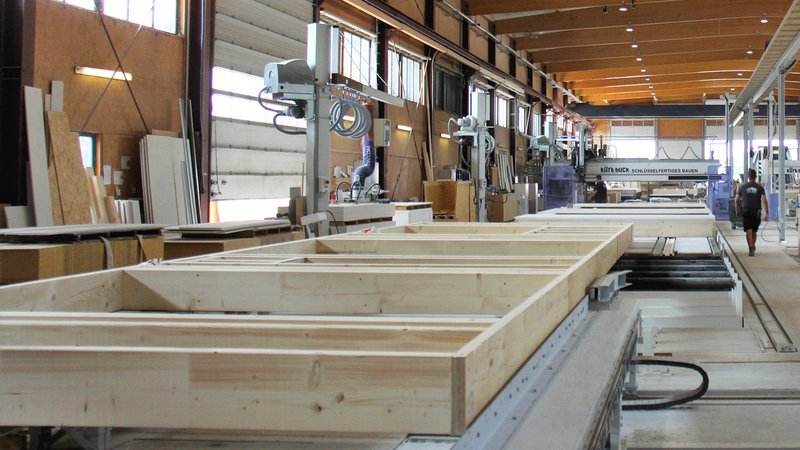 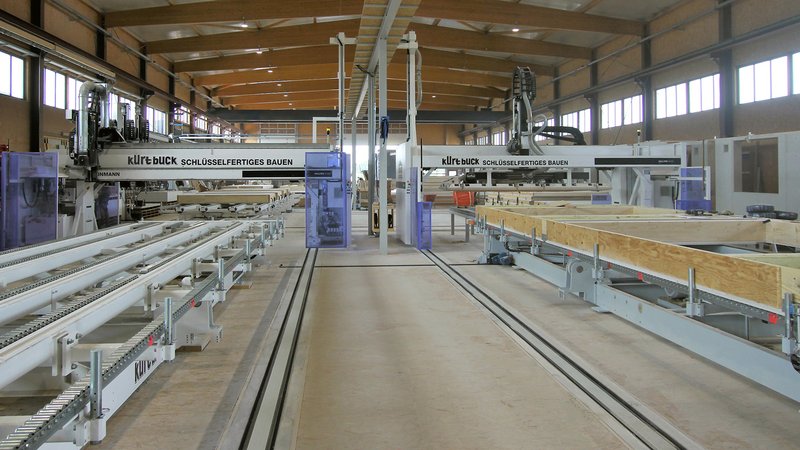 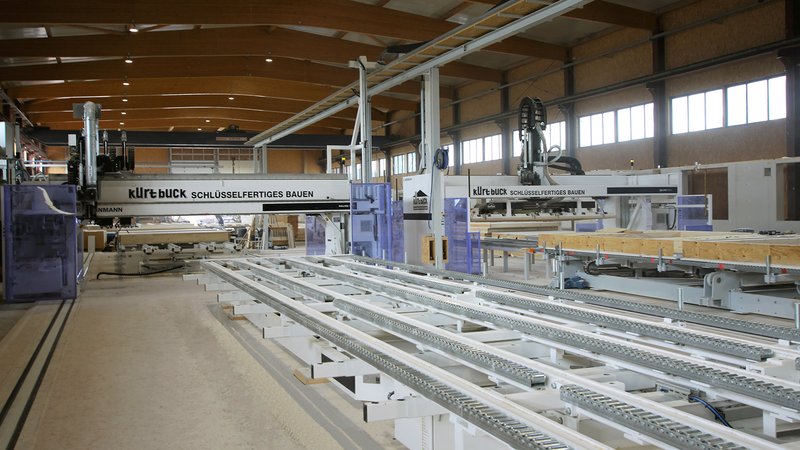 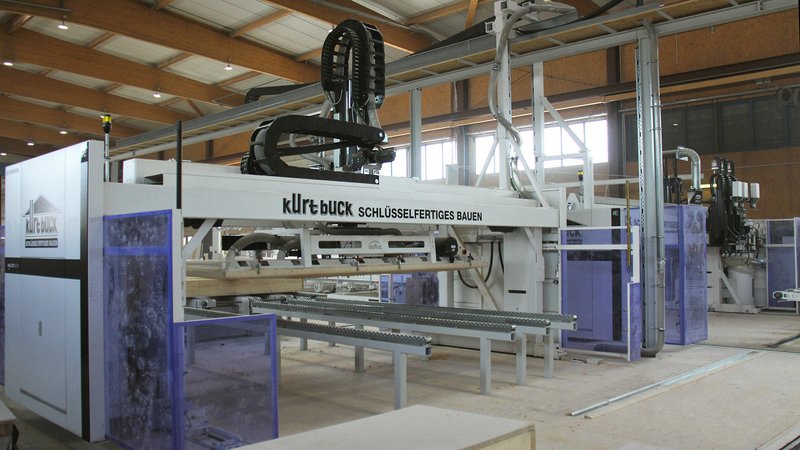 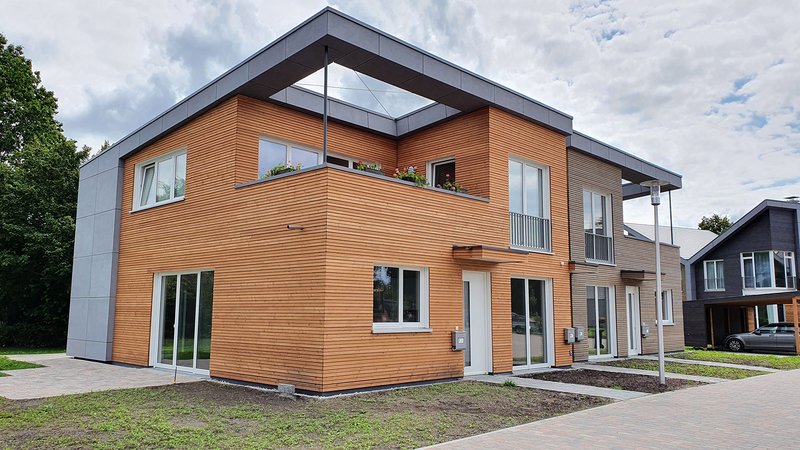 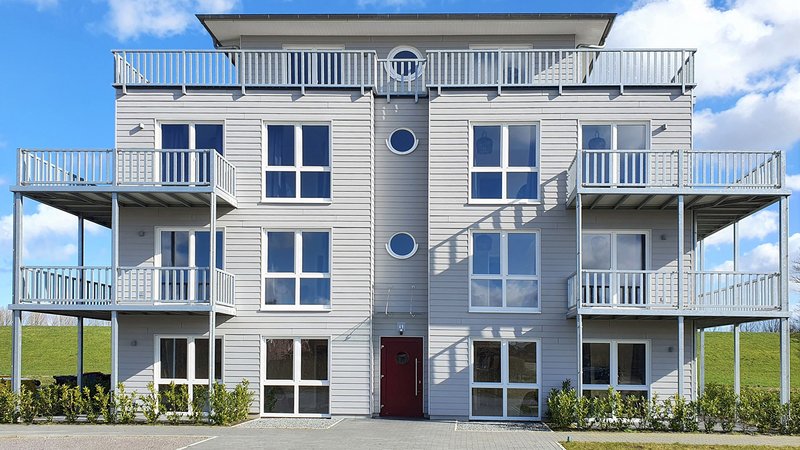 Production follows a flexible workflow concept, which was developed in dialog with WEINMANN.

The WALLTEQ M-380 spans three tables in its full length, allowing work to be performed on all three tables simultaneously to increase flexibility.

Using an isofloc blowing plate, the WALLTEQ M-300 insuFill blows the insulation into the elements.

Between 2013 and 2020, the volume of orders at Kurt Buck doubled. The driver for this development was above all sustainable, healthy, ecological construction.

One field of business of Kurt Buck is the turnkey construction of small to large buildings in the private, commercial and public sectors.

"When planning, we always had an eye on the future, which is why we planned future expansion stages when we made the first investment. Again, it was about how to reconfigure and expand the system if the market continued to develop as it had been doing."

That's why the Kurt Buck Baugesellschaft construction company in Bremervörde decided on a progressive model, with perspectives for the future, as the signs continue to indicate growth. The sharp rise in timber construction is leading to rapid growth for a lot of timber construction companies. This is a strong incentive for larger investments, which of course always represent a certain risk. To satisfy the increasing number of orders but simultaneously minimize the risk, many companies are therefore opting for flexible growth in stages. A long-term master plan, which, in light of the fast market development, sets key points for potential future developments with every investment step, makes sense in this regard. It also makes sense to invest only in equipment that is flexible and compatible with future steps. This is what happened at Kurt Buck Baugesellschaft GmbH & Co. KG in Bremervörde in Lower Saxony.

Heiko Pape is one of three managing directors of a company steeped in tradition. Founded 102 years ago, Kurt Buck Baugesellschaft was long a small carpentry and joinery shop in its infancy. In 1997, the company built its first timber houses, achieving the quality assurance of the RAL quality mark. Today, including the planning office, the company employs around 100 people, most of whom are carpenters. Its fields of business include carpentry work, interior fittings, windows and doors, conservatories, furniture and staircases, carports, renovations and even small to large turnkey construction in the private, commercial and public sectors. In Bremervörde, the company is experiencing a strong increase in demand for timber buildings in all areas: "Of course, we haven't reached the level of southern Germany yet," says Heiko Pape summing the situation up, "but our proportion of timber construction is nevertheless already at 12 percent." This is a development that prompted the company to take its first step into automation in 2013. By investing in a WEINMANN FRAMETEQ M-300 combi wall system (a combination of a frame work station and a multifunction bridge) as well as two work tables, the company was focusing in particular on increasing quality and production capacity. Even then, it was important for the company to grow with a sense of proportion: "We could have made much further use of the opportunities available," remembers Jörg Groß, who manages the project department at WEINMANN. "But at Kurt Buck, they wanted to invest at a manageable level initially and then wait to see how the market developed for the company in the next few years."

This was an open question that was answered definitively in the following years: the number of orders doubled between 2013 and 2020. At the end of this period, Kurt Buck was running a two-shift operation and approaching the limits of the company's production capacity. In the north of the country, the driver for this development was above all sustainable, healthy, ecological construction. This was not only due to regulations from public developers, it was also demanded from private and commercial customers. In 2019, for example, Kurt Buck received an order for a larger residential development. The developer—in this case an association—demanded sustainable construction. Since the demand for ecological construction materials was increasing sharply for the schools, kindergartens, youth hostels, holiday parks and detached houses that the construction company was building, a particular need for action was identified in this area. "The trigger for our next modernization step was essentially the demand for an automated insulation solution that allowed us to offer wood fiber insulation in high quantities as a cost-neutral alternative to mineral fiber," explains Heiko Pape.

In parallel, the company wanted to move away from a two-shift operation in Bremervörde to make its own workplace more attractive. Therefore, not only did the company invest in a WEINMANN WALLTEQ M-300 insuFill, the entire production line was also restructured. In addition to three additional work tables and a WALLTEQ M-380 multifunction bridge, the core of this restructuring is a flexible workflow concept that was developed in dialog with WEINMANN. A large part of the existing production line was integrated into the new line. This was important for the company to keep the investment costs low. Every one of the existing machines plays an important part in the new production concept. The combined machine, made up of the multifunction bridge and the frame work station, thus contributes to effective optimization of the workflow: "We are certified for the construction of components for building class 4 and therefore we build a lot of fire barriers," explains Heiko Pape: "With these barriers, we lay the first layer of sheathing on the frame work station and then secure it and process it with the FRAMETEQ. This has proven to be the correct solution during ongoing operation because it avoids backups at the following tables." The three subsequent tables are new and span the full length of the WALLTEQ M-380. This too provides more flexibility, because it allows work to be performed on all three tables simultaneously. A further flexibility factor is that special components can be placed on the first of the three new tables while sheathing and processing take place on the frame work station. There is then a buffer table, where the second sheathing or the installation level takes place, and then the components are passed on to the receiving table for turning. The receiving table originates from the old production line. On this table, the insulation is blown in with the WALLTEQ M-300 insuFill, which is equipped with an isofloc blowing plate. This was the only place where one of the old tables could be used. This is because the old system was designed for elements with a length of 10 m, whereas as today, Kurt Buck produces elements with a length of 12 m. The second old table is therefore used in another hall for the production of small elements.

Planning for the future

In the main line, the required material is stored at each table and is deposited via a vacuum lift comfortably and quickly: "We always plan anything like this in depth with WEINMANN; the company is way ahead of others in this respect," explains Heiko Pape: "Here too, we have received great support—not only in the construction of the line itself, but also with the planning of the peripherals. This concerned, for example, the location of the beam processing system, or the use of cranes and other loading logistics. Jörg Groß, with all his experience, was able to help us in this regard. He ran through different variations with us and explained the advantages and disadvantages." It soon became clear that the company would extend its hall by 32 m to 110 x 25 m: "In one planning variant, we would have had all the machines in the smaller hall but then we would have had almost no space to store materials." Heiko Pape was particularly impressed by the long-term thinking at WEINMANN: "Jörg Groß always had one eye on the future, which is why we planned future expansion stages when we made the first investment. Again, it was about how to reconfigure and expand the system if the market continued to develop as it had been doing. This is a big advantage for us, and it's why the decision to go with WEINMANN was clear, even though we had contacted two other providers." One of the future prospects is an automatic wall slot with loading logistics that would allow Kurt Buck to fully utilize the capacity of its production line. At present, an overhead crane takes finished elements from the rear tilt table and transports them to an upright store, where windows and facades are applied. The crane then transports the elements onto changeover platforms. These logistics are cumbersome and time consuming but do still work, although with the increasing quantities, this is likely to become a bottleneck for production. "That's why we find this forward-thinking very helpful, because for us, all signs still point toward growth." Heiko Pape thinks that the company will look more closely at the wall slot and the loading logistics in one to three years, when the roof and ceiling production has been moved out and there is more space in the hall.

The next steps are being prepared

Delivered and assembled in March this year, the new production line was quickly put into operation. In Bremervörde, the experience of the employees who had already worked with the old production line was helpful. The existing component and detail catalog also proved to be helpful, even though the company switched to a larger provider for software. Together with a training course, initial support on site and a "very good" hotline, in just two weeks, the employees at Kurt Buck were able to run production without any problems. For Heiko Pape, this support is another important argument for working together with WEINMANN on future expansion projects as well. The management already has its eye on the next round of negotiations: the company has already submitted a planning application for a new hall in which it wants to set up an automated production line for roof and ceiling elements. This suggests that the current market development is also providing incentives for the implementation of further investment stages.

Kurt Buck Baugesellschaft GmbH & Co. KG is located in Bremervörde in Lower Saxony. The company was founded in 1919 and was initially a small carpentry and joinery business. The company now has around 100 employees. Its fields of business include carpentry work, interior fittings, windows and doors, conservatories, furniture and staircases, carports, renovations and even small to large turnkey construction in the private, commercial and public sectors.

From the felled tree to the finished house

Many hundreds of tree trunks are stored on the company's premises. Boards, square timbers and beams are piled…

Healthy indoor climate, pleasant scent and built in a few days. Homes made of wood are on trend. The Austrian…

During the modernization of its production line, NEMA placed special focus on individual solutions and now…