PAN + ARMBRUSTER have recently implemented the SAWTEQ B-300 flexTec robot saw, meaning that production is now able to continue for hours even after the working day has ended. 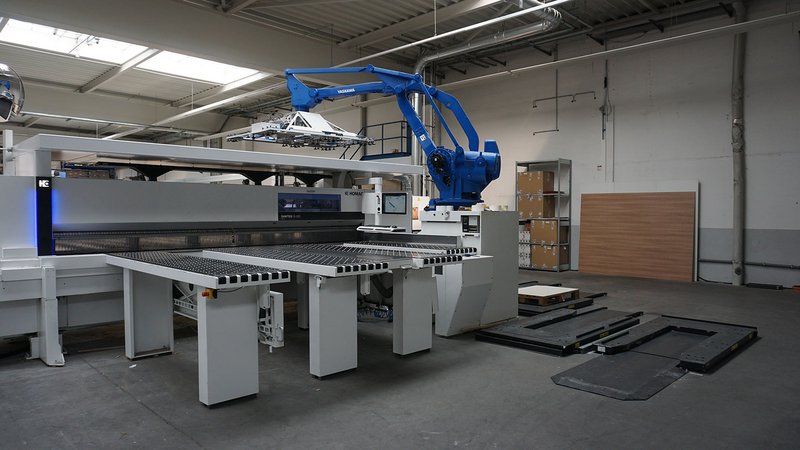 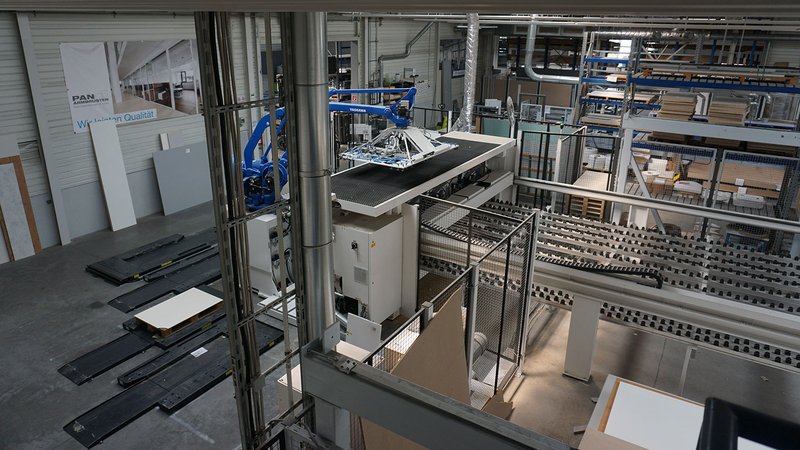 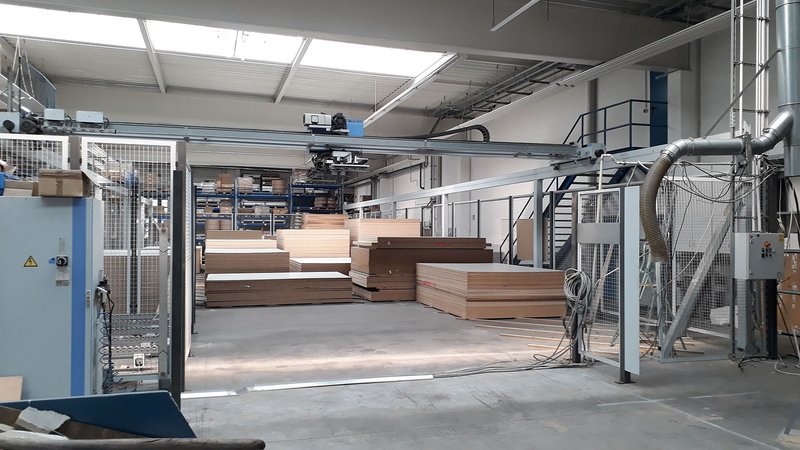 The industrial robot, which has proven its worth several times over, is completely integrated into the saw, and works independently for cutting jobs. No specialist knowledge of robots is required to operate the saw.

At PAN+ARMBRUSTER the SAWTEQ B-300 flexTec is fed via a lifting table as is standard. The compact installation ensures short distances between the storage and the saw.

Working seamlessly together: the SAWTEQ B-300 flexTec was set up as a direct extension of a HOMAG Group storage system that was already installed.

„Our new robot saw continues to run for up to two and a half hours without any need for human intervention. This releases valuable employee capacities. These capacities of our skilled workers are more urgently needed for more demanding tasks that can't be automated."

The innovative panel dividing cell processes cutting jobs over long distances without the need for human intervention and can also be operated manually at any time – for example, to divide packages of panels or for ad hoc cutting between jobs. It doesn't get much more flexible than that.

Individual designs, produced to precise dimensions and with well thought out functions: partition wall systems and room-in-room concepts from PAN + ARMBRUSTER meet the highest demands. "For more than three decades now, we have been designing modern working environments and developing innovative room solutions for business customers, both national and abroad," explains Matthias Armbruster, who took the company over from his father in Oberkirch, Baden Württemberg, making him the second generation to manage the company.

With its products and services, PAN + ARMBRUSTER has long since been one of the leaders of the industry. Together with its subsidiary Interwand GmbH in Dörzbach, purchased in 2014, the company employs more than 100 people. The business, founded in 1988, owes its success to its regular investment in the latest technology. "To remain competitive and to be able to meet our customers' expectations in terms of flexibility and individuality in the future, we're aiming to make our production to even faster and more efficient – with ever-decreasing batch sizes. To this end, we're continuing to further automate and digitalize our processes," says Armbruster.

Thanks to the HOMAG SAWTEQ B-300 flexTec robot saw, the company has just taken a huge step forward with cutting in terms of this plan. The dividing cell has been installed in the production hall at the Oberkirch site since mid-2019 – over a surface area of 10 x 10 meters as a direct extension of an automatic HOMAG storage system that was installed some time ago. The advantage of this combination of technology is that as part of the new installation, the storage could be perfectly aligned to the new robot saw. "The hardware and software were seamlessly compatible with each other," explains Armbruster happily, "there were no major integration or interface problems." This is especially true as the SAWTEQ B-300 flexTec replaced a classic HOMAG pressure beam saw.

For PAN-ARMBRUSTER, it was almost certain that the solution would come from the HOMAG Group from the very beginning. "We've been working with HOMAG machines for many years now and we are very happy with them," says Armbruster. The most important stations of the modernized cutting line: The storage facility transports the panels to a feed-stacking table. Here, the robot picks up the material and feeds it to the saw – according to the cutting pattern and continually realigning until all parts are finished. The labeling process is carried out by an automatic label printer on the saw. The robot then destacks the parts to pallets in stable, individually optimized stacks – for subsequent processing or on an order basis for instance. At PAN + ARMBRUSTER the robot has access to four destacking tables. "In terms of the configuration of the destacking tables, the SAWTEQ B-300 flexTec is very flexible – both in terms of the number of tables as well as how the tables are spread out in the space available," explains Armbruster, emphasizing, "This meant that we didn't have to make any major modifications to the hall." The installation and the commissioning of the SAWTEQ B-300 flexTec therefore took just four weeks.

The company sees the benefits of the new robot saw above all in daily production – and in many different ways. "In the past, an employee had to be at the saw at all times. The employee had to constantly switch back and forth between the saw and the edge, which meant that one of the two machines was always at a standstill for long periods," says Armbruster. "Now, we need just one employee for both HOMAG machines." The robot completes the cutting work automatically. The employee at the edge station simply picks up the parts cut by the saw. This is done pallet by pallet, as there is always plenty of inventory thanks to the four destacking tables. And finally, the SAWTEQ B-300 flexTec also continues running during the lunch break and carries on production work without the need for human intervention after the working day has ended – it continues until all cutting patterns have been processed or the pallets on the destacking tables are full.

"Our new robot saw continues to run for up to two and a half hours without any need for human intervention. This releases valuable employee capacities," says Armbruster, emphasizing that, "These capacities of our skilled workers are more urgently needed for more demanding tasks that can't be automated." It's a good thing, therefore, that this new investment in cutting has also eased the physical burden on the employees, leading to a significant decrease in resulting interruptions. The new saw means that heavy lifting and carrying are largely a thing of the past for PAN + ARMBRUSTER. In unmanned operation, the robot carries out the entire panel handling process – from feeding, through alignment up to destacking.

Unmanned or manual? As required!

Even the waste disposal is automatic. With the SAWTEQ B-300 flexTec, rough chips and cutting waste fall through a waste flap and are fed to a disk wheel shredder. This cuts up the material so that it is small enough to be fed into a pellet heating unit via the suction device and can be converted directly into heat energy for the business. "It's completely automatic! Nobody has to crawl around under the saw with a broom removing the cutting waste," explains Armbruster. Small offcuts are automatically cut and disposed of at the same time; larger offcuts go back to storage via the automatic return.

Automation is the key. Therefore, at PAN + ARMBRUSTER, the SAWTEQ B-300 flexTec tends to run in robot mode – approximately 70 percent of the time. But the other 30 percent of the time is no less important to the company. "We can switch the new saw from robot mode to manual cutting at any time – for example, to process unusual materials or for special cuts. This is extremely important in terms of us being flexible. In operator mode, we can even split entire packages of panels if required," explains Armbruster. "Thanks to this versatility, we can now use the new robot saw to carry out 100 percent of our cutting – this is also the case for our subsidiary in Interwand."

For good reason, as thanks to this new investment throughput is extremely accelerated, while noticeably more consistency in the production flow is simultaneously ensured, making the whole process much smoother. In conclusion, Armbruster explains: "The robot saw has shortened our throughfeed times by around 30 percent — but with no loss of quality in the cutting." Not only does the robot move quickly, but also extremely precisely and without damaging the materials. "We have hardly any material losses due to scratches and transport damage now."

What's more, in robot mode, jobs can be grouped more efficiently and processed with better optimization, significantly improving the overall material yield in production. "Cutting waste and material offcuts are minimal now. The optimization and the interaction in our production work are so efficient that we've had days where we didn't have enough fuel for heating," says Armbruster. The material yield has increased dramatically since the robot saw was commissioned. The estimated improvement in yield is 15 percent, and every percentage point translating to real money! Matthias Armbruster is therefore certain: "Our decision to buy the SAWTEQ B-300 flexTec was absolutely the right one. I would make the same decision again in a heartbeat."