Roof and house from the same production line

The new production line is flexible enough to produce wall and roof elements. This concept immediately offers Bouwkomeet access to a new, fast-growing field of business. 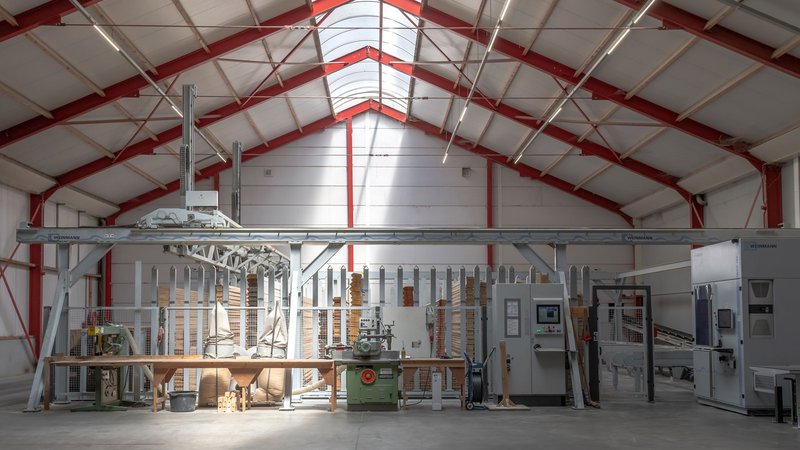 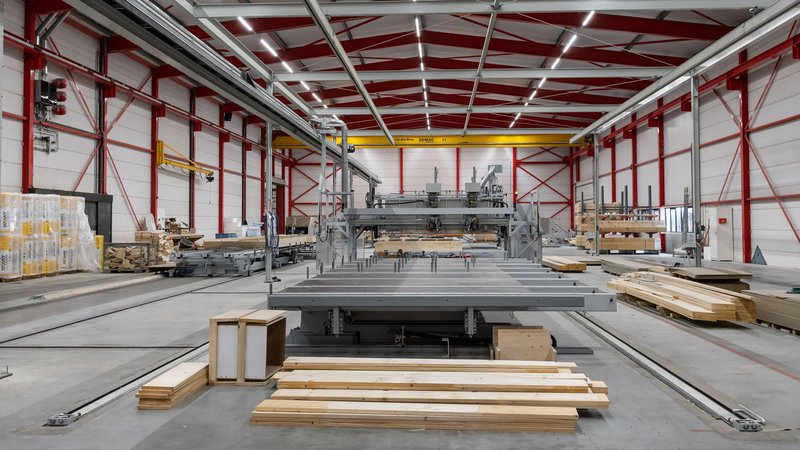 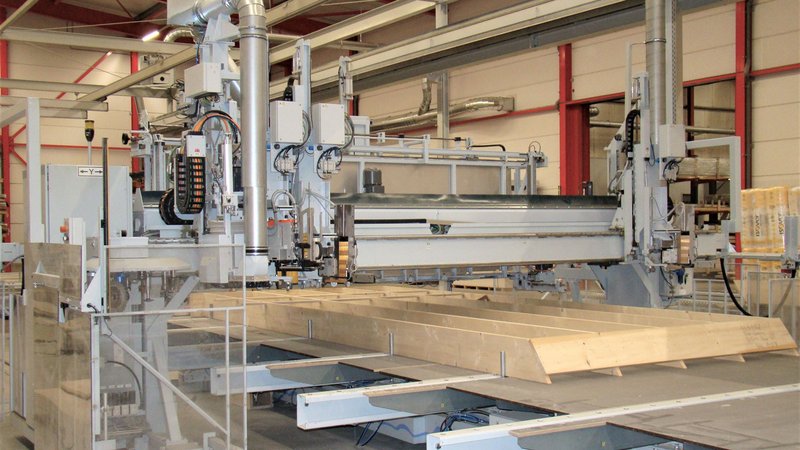 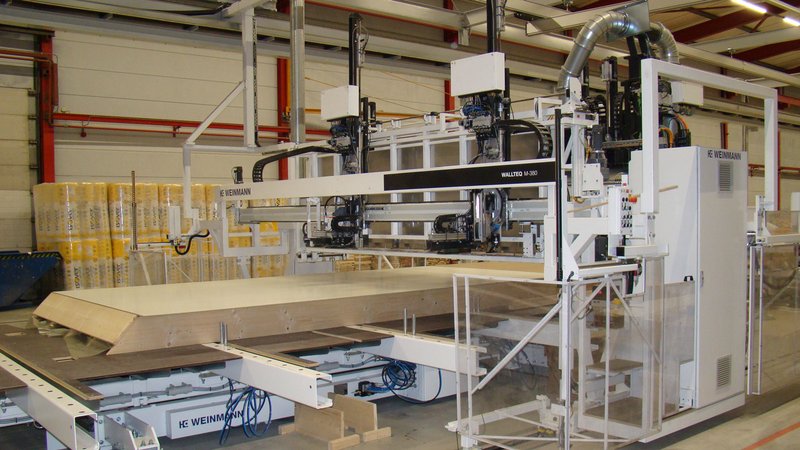 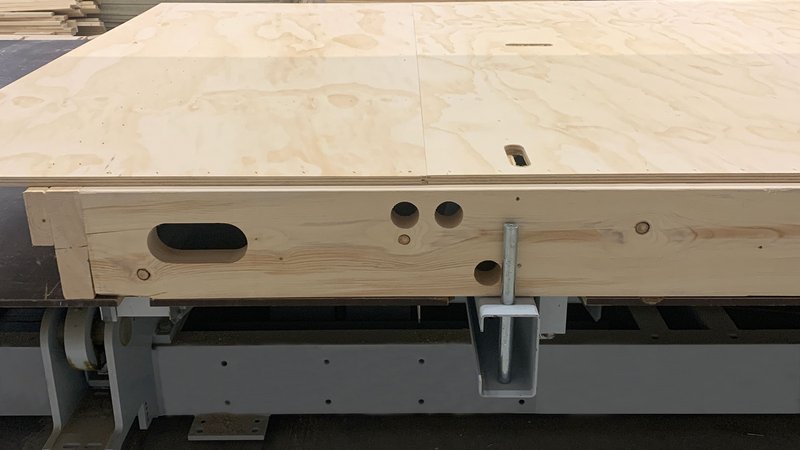 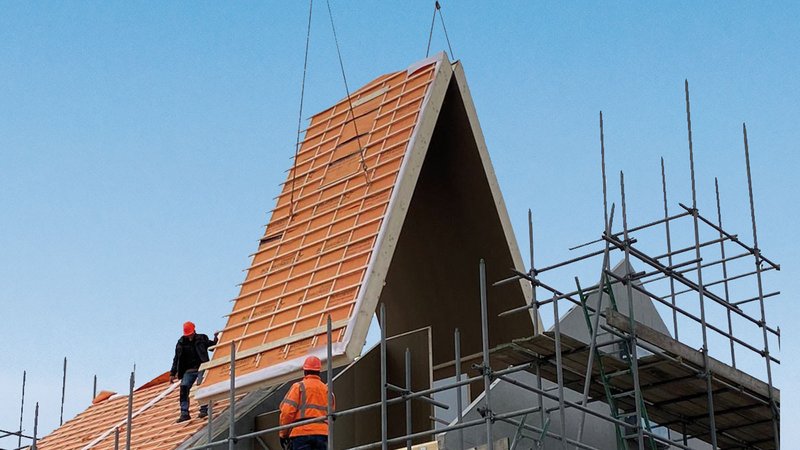 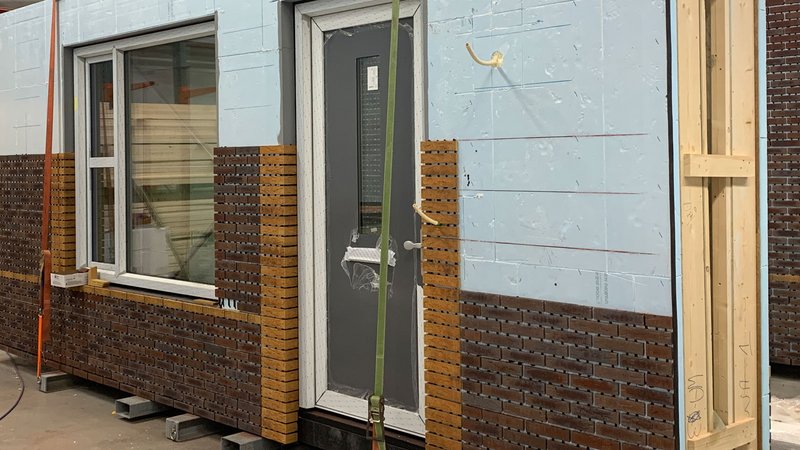 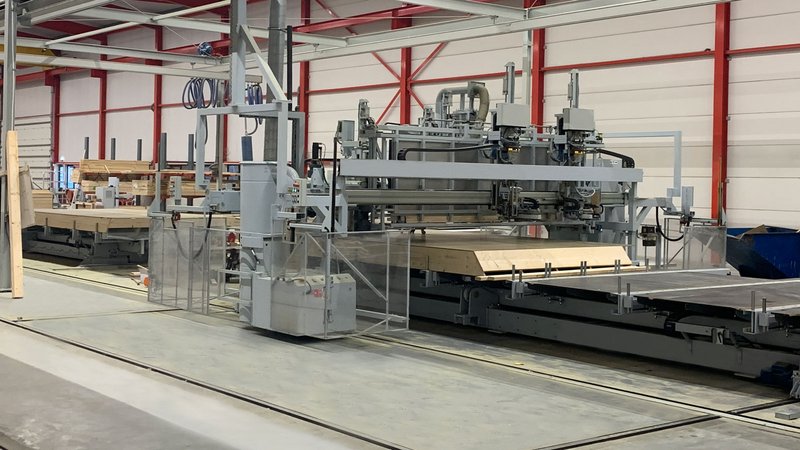 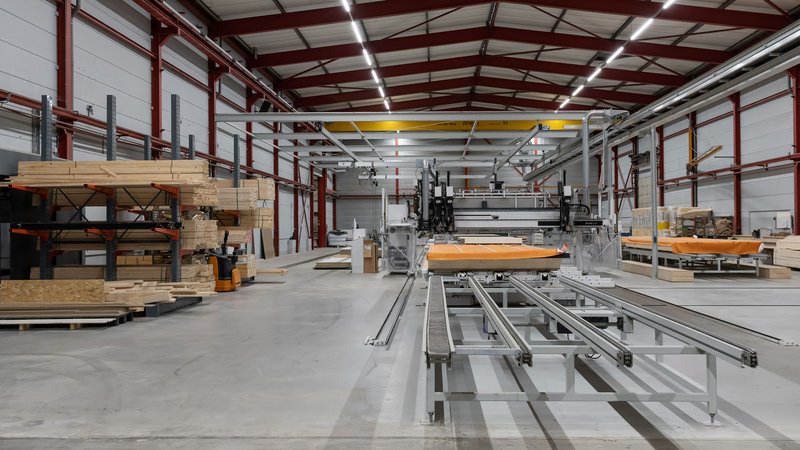 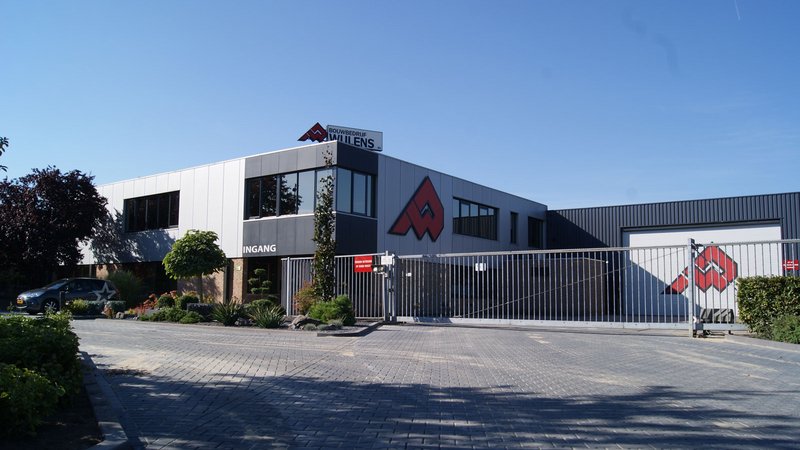 The BEAMTEQ B-660 carpentry machine with integrated feeding portal.

Prefabrication of the roof elements.

With the integrated lath magazine, the laths are automatically positioned, fastened and cut to size.

With the adjustable hinged sides, both right-hand and left-hand roof elements can be produced.

The roof elements with integrated hinges are opened and assembled on the construction site.

All wall, floor and roof elements are produced with the two production lines.

"For us, improved quality management was an important reason for the investment."

Just like in northern Germany, buildings in the Netherlands are traditionally brick-built. Whereas many parts of Europe have seen a significant increase in timber constructions in recent years, little has changed in Netherlands. Germany's northwestern neighbor typically only uses timber for roofs. This is where large timber frame companies such as Bouwkomeet make the lion's share of their sales. In contrast to the situation in Germany, the focus is on prefabricated elements with hinges; the elements merely have to be unfolded, set up and secured at the construction site. The company is based in Haaksbergen, where its 120 permanent and 80-85 temporary employees produce around 220 000 m2 of roofing each year.

However, timber construction is now beginning to gain popularity in the Netherlands too. Even back when the first WEINMANN production line was delivered to Haaksbergen in 2017, signaling the move from manual to CNC-controlled production, the company suspected that the construction of timber houses could become an important market in the near future. Therefore, the company asked WEINMANN to ensure that the new production line was capable of a high degree of flexibility: Not only should it be suitable for the production of roof elements, it should also be capable of manufacturing walls and floors. "We therefore worked together with the WEINMANN engineers to adapt the software and the settings accordingly," recalls Managing Director Nicky Wijlens. The objective of this course of action was to use the line for a pilot project consisting of five timber houses in 2018 and thus explore the possibilities of this method of construction.

The stimulus for this project came from an investor who wanted to build and then sell the houses. The fact that the client had ten open inquiries on the table by the end of the pilot project demonstrates just how pioneering the project was: This made it clear that, influenced by discussions about the climate, the demand for timber houses was slowly gaining momentum in the Netherlands as well. Bouwkomeet recognized the sign of the times, optimized the new system further for timber frame construction and had already sold 60 timber houses by 2019. This year the company will sell 80-85 timber houses, and in Haaksbergen, they're already talking about an annual quantity of between 120 and 145 for next year. One of the special features of the situation in the Netherlands is that these orders for detached houses come from commercial clients who largely rent out the properties after construction. Among private developers, the demand for timber houses is currently still almost non-existent.

In 2019, Bouwkomeet invested in a second production line that was identical to the first line, with just one exception: Instead of 10 m tables the company selected a more compact solution with tables that are 8 m in length. The two production lines are otherwise identical, with both allowing a maximum element width of 3.50 m. Both lines are tailored to the specific requirements of the Dutch customer and begin with two in-line BUILDTEQ A-500 carpentry tables.

Two frame works for wall, floor or roof elements are clamped on the tables for pendulum operation. Three WEINMANN BEAMTEQ carpentry machines are used to process the beams and studs. The foil and sheathing are then attached before a WALLTEQ M-380 multifunction bridge fastenes and processes the sheathing. The tables have adjustable hinged sides so that both right-hand and left-hand roof elements can be produced. In the subsequent turning operation, the roof elements are placed upright without standing on the overhanging roof battens. The second special feature is that the roof and floor clamps can be positioned individually. For the production of roof elements, the positions of the rafters are specified in advance; for wall elements, the clamps can be removed so that the top and bottom plates can be inserted. This makes the system highly flexible and suitable for a wide variety of elements. Using the integrated tilt function, the carpentry tables turn the elements and transfer them to the next work table in the longitudinal direction of the line. Here, the insulation and, depending on the type of element, the individual sheathing layers or the laths are fitted. The multifunction bridge, which is equipped with a lath magazine, positions and secures the laths and saws them to the correct size. Robust, bonded clinker blocks are generally used as the facade. The company can currently produce around 20 simple roof elements per system, per day which are then delivered to construction sites across the Netherlands.

When the first production line was commissioned in the company's 20 000 m2 hall, the work preparation process was so well prepared that the changeover in production was very smooth. "Of course, we had to adapt some process steps and details to the new method of production, but the changes were mainly small things," remembers Nicky Wijlens. The data for CNC production had largely already been generated in the company's hsb CAD system, "but we couldn't use it for manual production." The corresponding interface was also already available, which is why just two weeks after installation, the new line changed over to CNC production completely. The goal – to achieve constant quality for all components – was thus achieved almost immediately. "For us, improved quality management was an important reason for the investment," explains Nicky Wijlens, "because our customers expect us to produce high-precision components. If we deliver ten roof elements, they must all be absolutely identical – with manual production, there were often differences." Manual production was also increasingly difficult to maintain because the Netherlands is also facing a shortage of skilled workers. This was another important reason for the investment in Haaksbergen.

Ultimately, the change in structure has significantly improved the market position of the Dutch company. During company visits, commercial customers are impressed by the professional production methods because their construction projects benefit from improved quality management and leaner time schedules. Furthermore, the automated production offers even more complex processing possibilities. Nicky Wijlens: "Today, we can perform processing that our employees were not able to do manually or that would have been too expensive." This has significantly increased the level of prefabrication in Haaksbergen. Precisely dimensioned timber connections and bore holes now enable shorter production and assembly times and more precision on the construction site. Nicky Wijlens: "I like to compare our house construction process with IKEA: unpack, build, done."Higher capacities will also allow Bouwkomeet to keep pace with development should the demand for timber houses rapidly increase. At present, Wijlens estimates that the timber houses make up less than five percent of houses constructed. However, a rise is expected because the Dutch government has started to encourage the construction of energy-efficient buildings.In Haaksbergen, the company is already thinking one step ahead and looking at investing in a multifunction bridge with automatic insulation. The company wants to use this machine to complete its move to an ecological method of construction.

The company, founded in the Netherlands in 1950, is today a leader in the field of residential and industrial construction. Whole houses and additions are prefabricated on a production and operating area of 27,000 m² and then delivered to the construction site ready for occupancy.

Roof and house from the same production line (PDF, 290 KB)

Manufacture all roof and ceiling elements with a single system

The UK is targeting to build 300,000 homes by the mid-2020s but due to the problems like shortage of skilled…