With the multifunction bridge WALLTEQ M-120 Zimmerei Hänsler can achive shorter production time, while even improving their quality standarts. 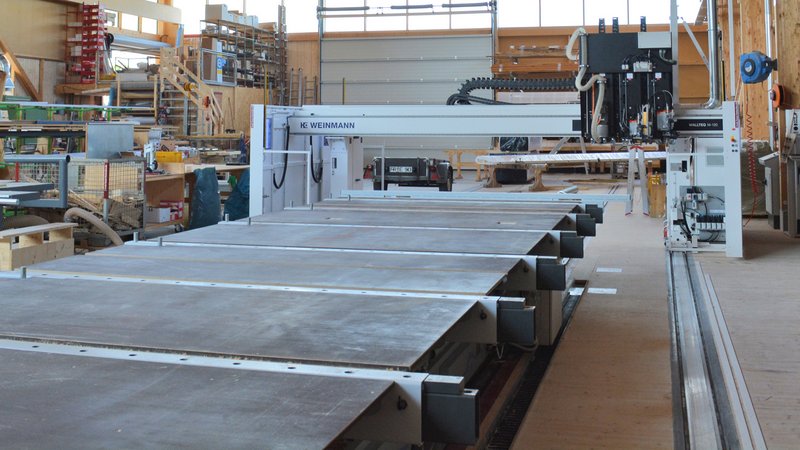 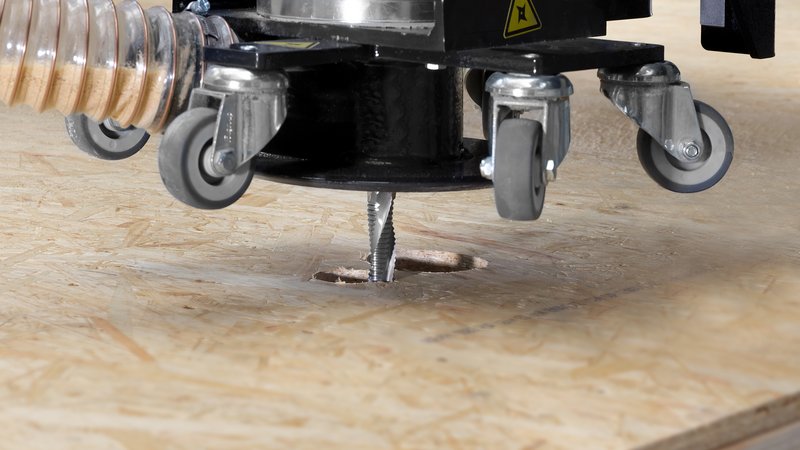 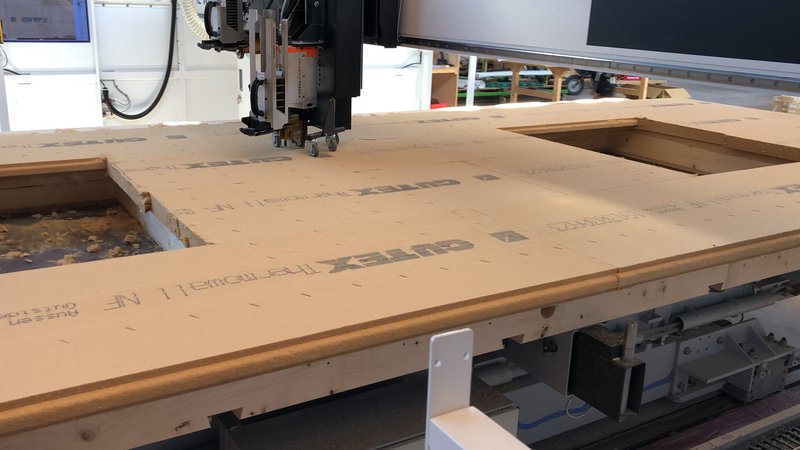 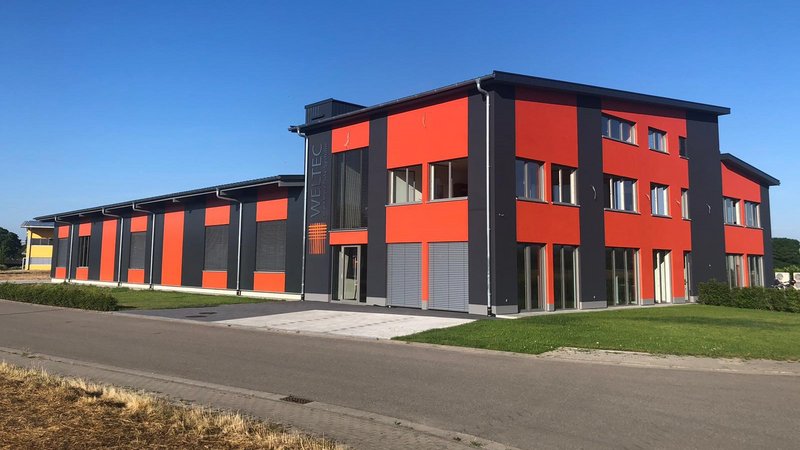 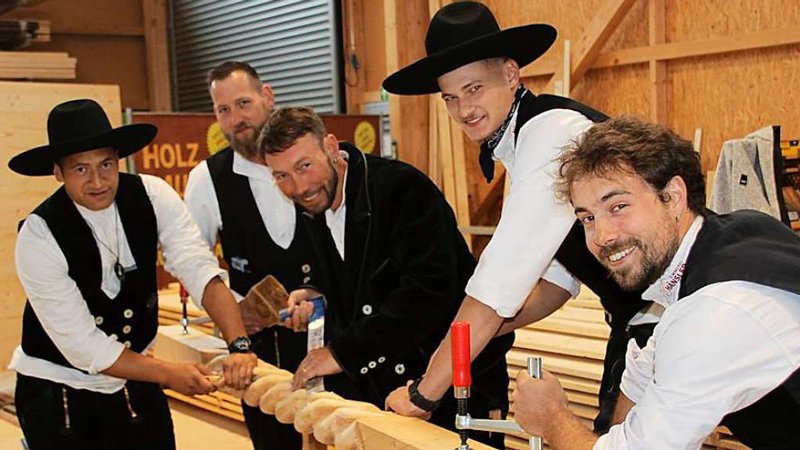 With the trimming unit, the WALLTEQ M-120 creates all the cut-outs and openings in the elements. Photo: Hänsler

Commercial facilities with a management building attached for the company weltec. Photo: Hänsler

A total of 9 employees work for the Hänsler carpentry business. Photo: Hänsler

"This level of investment made the decision easier for us. Even if there is the odd occasion where we don't have it running for a couple of weeks, I can sleep at night. It's the perfect machine for our needs."

An article of the magazine mikado, edition from 06.09.2019 here you will find the original article

The boom in wood work is not showing any sign of stopping, with both small and medium-sized businesses as well as companies in the prefabricated house industry working to full order books. The first step in meeting this demand is ensuring the necessary capacity can be met — despite an ongoing shortage of skilled workers. However, existing technologies for automated production frequently involve high levels of investment, and are therefore out of reach for smaller businesses. To allow these businesses to continue to develop and to benefit from growth, solutions that enable efficient production of small quantities at a low level of investment are essential. With the WALLTEQ M-120 multifunction bridge, WEINMANN has developed a machine precisely to meet this demand. Equipped with fastening and processing units for creating openings and cut-outs in elements and for securing the panel materials, the WALLTEQ M-120 offers everything a carpentry business needs.

One company that has already taken this step is the Hänsler carpentry business in Merdingen, Germany. Founded in 1977 as the Stork&Hänsler carpentry business, the company has been constantly growing. In 2003, after completing his two-year master craftsman training, the proprietor's son Wilfried Hänsler joined the business. In 2009, Wilfried finally took over his father's shares, founding the Hänsler carpentry business. In 2015, Hänsler invested in a new plot in Merdingen as well as in the construction of production facilities, with the purpose of increasing the level of prefabrication he could offer. One year later, he also invested in his first WEINMANN carpentry table. At that time, however, there was no machine available on the market that was suitable for his requirements. When Hänsler learned about the new WEINMANN WALLTEQ M-120 multifunction bridge in 2018, he knew immediately that it was the right machine for him. This was exactly the solution he had been waiting for: "This level of investment made the decision easier for us. Even if there is the odd occasion where we don't have it running for a couple of weeks, I can sleep at night. It's the perfect machine for our needs."
Visits to multiple companies that were already working with the multifunction bridge were enough to convince Hänsler and his team, and the decision to invest in the WALLTEQ M-120 was taken without delay. The objective was to increase efficiency across the entire production process, increase capacity and quality, and to create an innovative workplace for employees. Now, after the first two months, Hänsler is already in a position to say that production times have reduced: "The WALLTEQ M-120 can process a single wall in just 12 minutes. Before we had the machine, it took two employees around 30 minutes to do the same work." The higher level of quality is evident from a number of details, such as the nail patterns. Based on the parameters specified, the multifunction bridge secures the panel materials precisely at the defined positions.
All buildings from Hänsler are customized. For example, the wall heights are manufactured according to customer requirements. According to Wilfried Hänsler, "the machine is perfect for processing the individual elements." The wall structure comprises cavity insulation with wood fiber, a 60 mm plaster-base sheeting on the outside, and a GFC diagonal solid-wood-panel shell on the inside as standard. The shell consists of a 30 mm Black Forest silver fir panel that is free from glue and hazardous substances. At 30 mm, it is thicker than OSB panels and provides greater noise protection. In addition, the lack of hazardous substances means that customers feel more comfortable having the panels in their home. A 15 mm gypsum fiberboard or—if required—a mudbrick panel is inserted at the inner installation level, which is also insulated with wood fiber.

There was no real change in terms of work preparation. The walls had already been created in CAD, since beams are generally produced externally. This meant that only the trimming and the nail lines had to be defined. Today, employees only need to spend a slightly longer amount of time creating the data. The changeover to the automated production process also took place without any problems. As you might expect, some employees had concerns at the beginning. However, Hänsler involved his employees in the considerations at every stage, which meant that they were able to get a good picture beforehand of what they could expect. As a result, they are now happy to work with the new machine, which everyone in the company calls "Fridolin".
Hänsler's customers are all located within a radius of 15 to 20 km, and Hänsler wishes to retain this close regional proximity. The company produces between 9 and 12 houses per year, including commercial constructions. House and commercial construction constitutes the largest part of the business, with the contract production of elements making up another key area. Hänsler is currently working on a project in the area of element production that encompasses elements of approx. 400 m². Wilfried Hänsler is impressed with the speed of production: "In our current project, we have already produced four walls with multiple panel layers within three hours. We wouldn't have been able to do that manually." Smaller projects, such as carports, can now be produced quickly using the multifunction bridge: "We positioned the elements and the machine completed the entire processing." The WALLTEQ is also occasionally used for other work, such as trimming drawer inlets. This processing can be carried out alongside other work.
Based on the calculations for the investment and utilization, Hänsler anticipates that the investment will have paid off in the next 5 to 6 years. Preparations have already started for extending the system with a second carpentry table. At the moment, however, this is not possible due to space restrictions, which is why the company is planning the construction of a second facility.

Hänsler builds timber houses that are customized entirely according to developers' requirements and follow modern and ecological principles. Turnkey or as a self-build house