The Daxenberger brothers have taken the advertising slogan "Growing with the HOMAG Group" to heart. 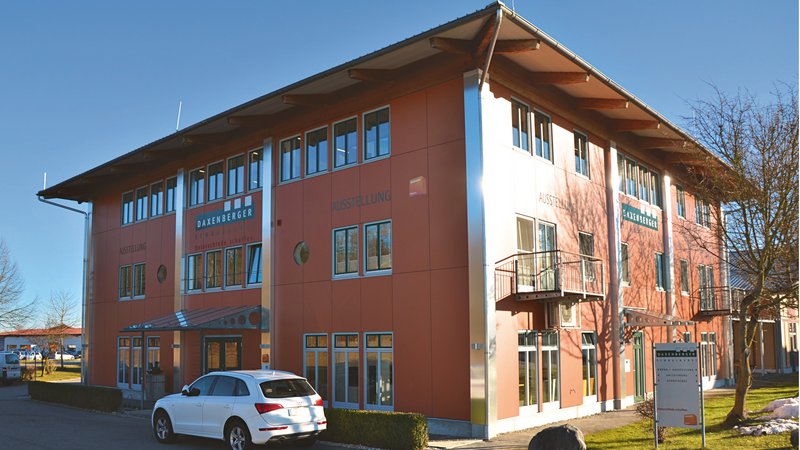 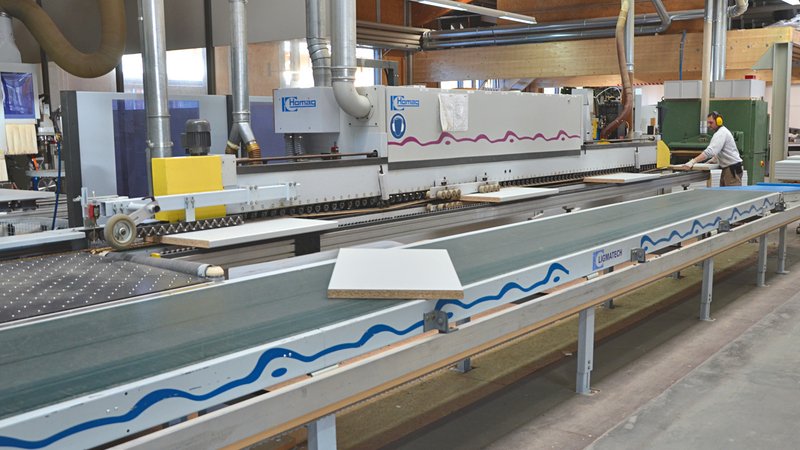 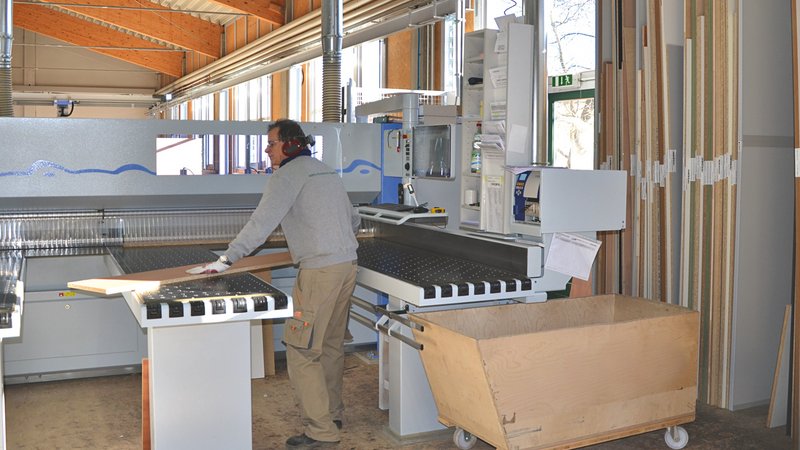 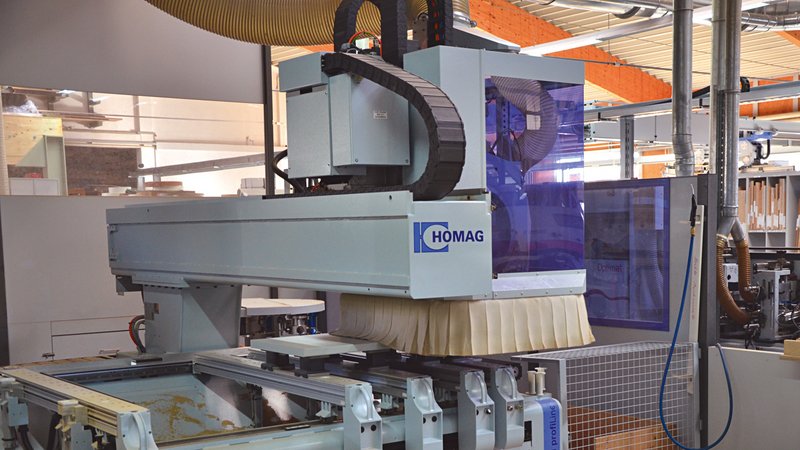 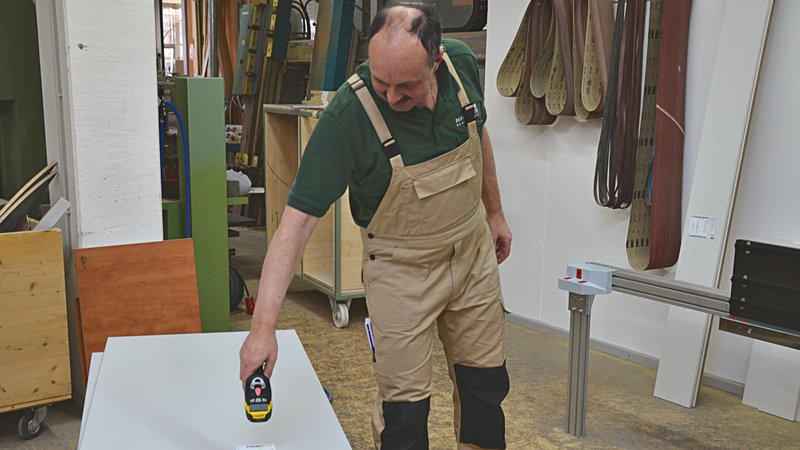 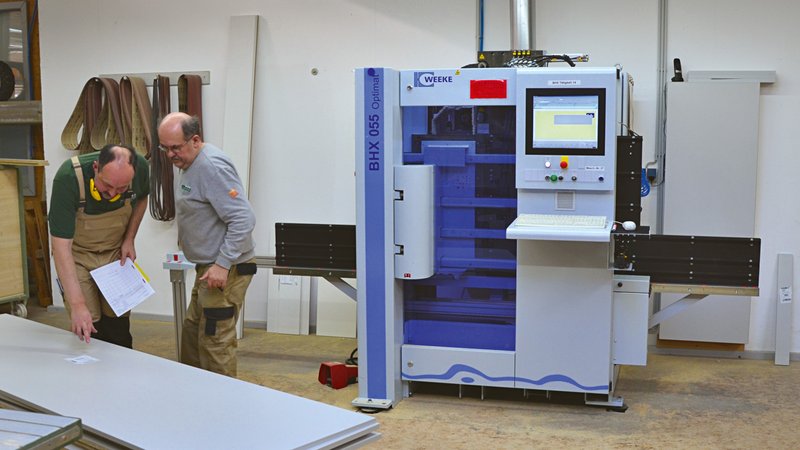 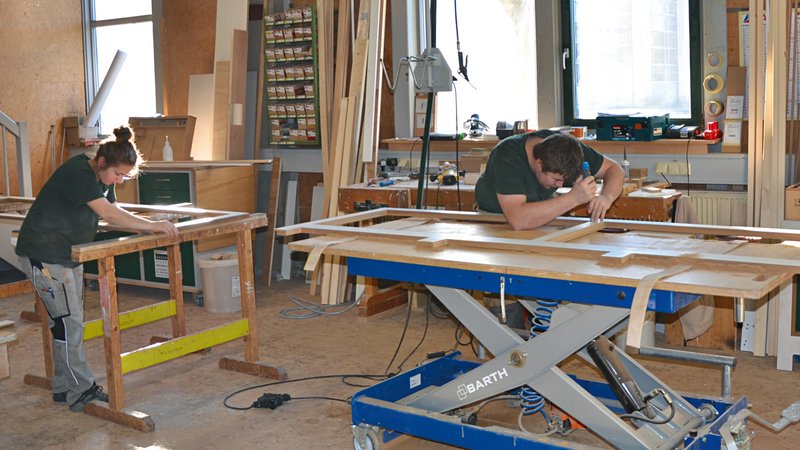 HK visited this showcase joinery in Seeon near Lake Chiemsee.

The KR 77 one-sided edge banding machine from HOMAG is equipped with an automatic part return and requires only one machine operator.

During cutting, the networked joinery starts the organization of its material flow with the HPP 300 panel dividing saw from HOLZMA and the TLF 211 area storage system from HOMAG Automation.

The BOF 311 profiLine CNC-controlled processing center is the second machine of this type at Daxenberger.

Handheld barcode scanners like the one shown here are used at Daxenberger to link every machine to the central computer.

The BHX 055 Optimat processing center from WEEKE has been introduced perfectly at Daxenberger. It drills and trims all furniture parts.

Just like in industry, the power supply comes from above. Lifting tables replace workbenches.

An article which was published in the HK Magazine, edition 02/2016.

Even though every visitor is amazed by the machine pool and the networking, which up until now has existed mainly in the furniture industry, the Daxenberger joinery has remained a real craftsman’s business. Despite this, the company—which is run by Bernhard, Josef and Simon Daxenberger—is filled with the latest technology, ranging from a saw-storage combination to various processing centers and software solutions. HK visited this showcase joinery in Seeon near Lake Chiemsee.

The Daxenberger brothers have taken the advertising slogan "Growing with the HOMAG Group" to heart. They are equipping their joinery with the latest technology: office workstations, CNC-controlled machines and software solutions are all networked. Handheld barcode scanners link every machine to the central computer. The networking concept and the latest machines are sourced from the HOMAG Group. "Just because we have networked all of our company processes, that doesn't mean we are an industrial company," says Bernhard Daxenberger, master joiner and Co-director of the Daxenberger joinery together with brothers Josef and Simon, dismissing a commonly made assumption. "And we will always remain a joinery dedicated heart and soul to craftsmanship."

The "bench room", which the employees were allowed to plan and set up themselves, is dominated not by classic workbenches but by moveable hydraulic scissor lifting tables that offer a high degree of ergonomics for the joiners. The experience with these tables has been so good that the Daxenberger brothers are planning to buy more. And the "bench room" has another special feature that is certainly unusual for a joinery: all power is supplied "from above". "Concealing" sockets behind panels is not permitted. Even suction devices are installed above head height and are cleared away cleanly so that they are never in the way.

And this overhead system used in the "bench room" is also used in the machine room. All machines are positioned optimally along the material flow according to their function: "This gives us more space and shorter distances to cover," explains Bernhard Daxenberger. The production line starts with cutting: panel material to the left and solid wood to the right. This is followed by the KR 77 Optimat one-sided edge banding machine from HOMAG. Material is fed into this machine from the panel saw. The machine has an automatic part return and requires only one machine operator.

Positioned directly afterwards is a BOF 311 profiLine CNC-controlled processing center, which is the second machine of this type at Daxenberger and which handles the complex trimming and drilling tasks. For the standard tasks involved in drilling and trimming of furniture parts, a WEEKE BHX 055 Optimat processing center was purchased and has proven its worth fully at Daxenberger. "This machine works so efficiently, quickly, and precisely that the investment has more than paid off," says an enthusiastic Bernhard Daxenberger about the small machine positioned to the left of the production flow. Upstream of this, a window machine is located between the panel saw and the BHX. This machine does not need to be flexible as it is only equipped with tools for one profile. "Because we only build this type of window and this has proven successful, here we don't need to be as flexible as a window specialist," states the Daxenberger boss. Two sanding machines are followed by the surface processing assembly, which consists of two belt sanding machines and two paint stations.

What you do not see at Daxenberger is a large number of transport carriages loaded with parts and "parked" in the halls wherever there is space, which results in a great deal of time spent searching for things. "Thanks to the way we have organized the networked production, we no longer have to search and we always know where the material to be processed is located," explains Bernhard Daxenberger proudly. From a purely external perspective, the barcode label printed on the panel saw and affixed to every single part is a decisive organizational factor in networked production. Not only does the barcode identify the part, it also provides access to the bill of materials and the work plan. That is, if the workers were able to read the barcode. The Daxenberger brothers use handheld barcode scanners for this purpose.

But this wasn't enough for the Daxenbergers. They were aiming to achieve seamless integration of the computer and software. They wanted the standard "Schreiner-Plus" software to be able to "talk" to the Imos 3D software and machine control systems. The experience of the HOMAG Group was a key factor in this regard, as the HOMAG Group claims to be the pioneer of networked production. And in Friedrich Schweiger, HOMAG Area Manager for southeast Bavaria, who has supported Daxenberger for many years and built up a trusting relationship with the company, the Daxenberger joinery has the support of an honest consultant. "It was clear to us that buying machines and different software programs would not be enough and we had already prepared ourselves for a lot of work internally," says Bernhard Daxenberger, letting us in on the inside story. "But it was worth it. I would never want to return to the way we used to work."

Today, at the start of the process chain, there is a HOLZMA series 3 panel dividing saw. Daxenberger purchased the HPP 300 profiLine model "because we had already had good experience with the predecessor machine from HOLZMA." This new saw enables the cutting of large panels up to 5600 mm in length and can be connected to a storage system in a cost-effective way. The company also required that the saw could be perfectly handled with just one machine operator. It was also important for Daxenberger that the panel dividing saw could be networked and they could reduce waste to a minimum. Features such as offcuts management, offcuts labeling and scanner connection were particularly important. Daxenberger also uses the "Thin board package".

But it is in the combination of the saw and storage system that the benefits resulting from an optimal machine utilization and minimum space requirements for stored panels can be exploited and measured in terms of time and effectiveness. The TLF 211 panel storage from HOMAG Automation—as it is positioned at Daxenberger—stands out thanks to its potential for optimization: transport routes are reduced and more space is generated for panels.

The ST61 suction cross rail supports transport within the warehouse and the transfer to the HOLZMA saw, which is almost never idle. The Daxenbergers have given themselves a competitive advantage solely as a result of the time saved due to the fact that automatic area storage is simply quicker — there is no "search time". Productivity can therefore be increased by up to 40 percent with the same level of personnel.

The Daxenbergers have thus calculated an amortization period that is very impressive. Bernhard Daxenberger was surprised by the good price/performance ratio and predicts that "the system will have paid for itself in five years." Friedrich Schweiger, the HOMAG salesman, goes one step further, saying: "The combination of saw and storage pays for itself when sawing 20 panels per day." Bernhard Daxenberger is also convinced that the combination of the HPP 300 panel saw and TLF 211 area storage system is a very interesting prospect for smaller joineries too. This is because the intelligent offcuts management reduces the production costs noticeably in every business. According to HOMAG, correct material handling is a key to success for cost-efficient production. It starts with ordering new materials and includes the processing of small material offcuts. As part of the new woodStore 6 storage control system, with OffCutPro HOMAG Automation offers the right module for storage management for large to small offcuts.

The Daxenberger carpentry business was founded by Josef Daxenberger in 1963 — at that time of course, no computers were involved. In his in-law's garage, the young master carpenter started with a workshop area of 60 square meters. Two years later the first assistant was hired, and in 1966, the first carpentry trainee joined them. In 1970, the first large new workshop was built. After the last extension in Truchtlaching in 1988, the effective work and storage area was 1000 square meters. The philosophy of the founder—excellent personal contact and first-class work—allowed the company to continue to grow and forced them to build new premises on the meadow in neighboring Seeon. After 18 months of construction, the company moved into the new operating premises in October 1996 with a team of 35 employees. In 1997, the founder Josef senior retired and his sons, Bernhard, Josef and Simon took over the management of the joinery. The three sons have continued to develop the company they inherited and have equipped the joinery with the latest machines and computer technology. It was, however, very important to them to be able to say that their joinery—which now employs 85 people—has remained a business dedicated to craftmanship. 80 percent of sales are to private customers who value excellent quality and exclusive joinery work. Thanks to the integration of computers into their business and the relatively high level of automation, the three brothers also see themselves as being in a good position with regard to invitations to tender. Their motto is: “Unterschiede schaffen” (Make a difference). To do this, they use first-class materials, process these perfectly, and in addition to their experience as craftsmen, guarantee the famous Daxenberger service.