The WALLTEQ M-380 blowTEC can not only process timber elements - with an integrated blowing plate, it also takes over fully automatic insulation. 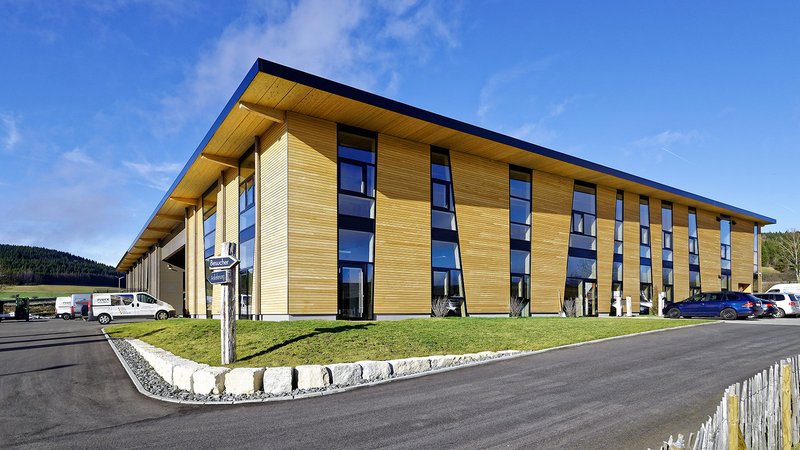 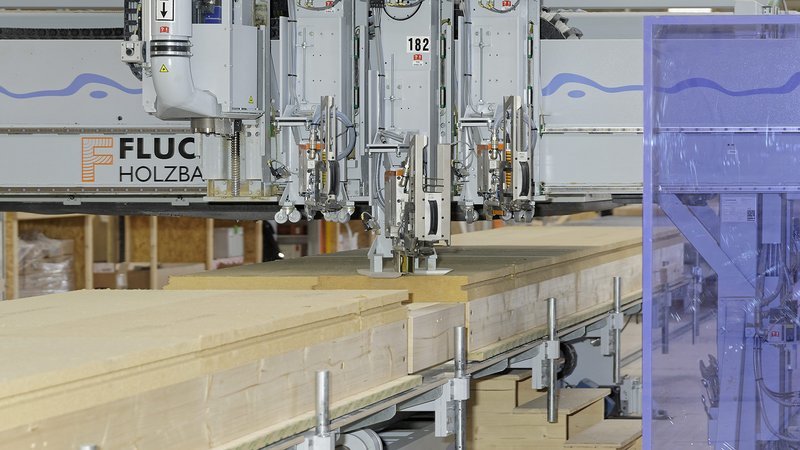 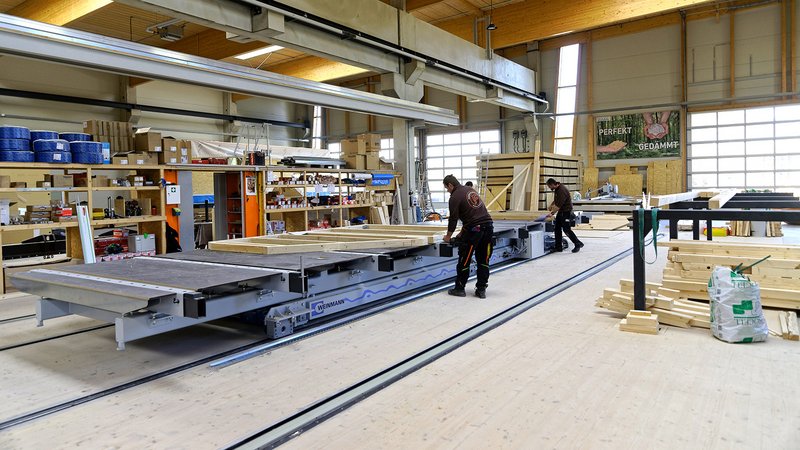 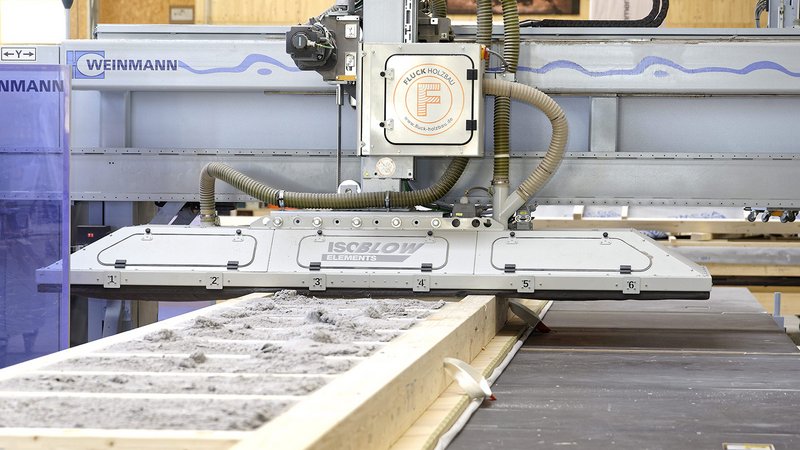 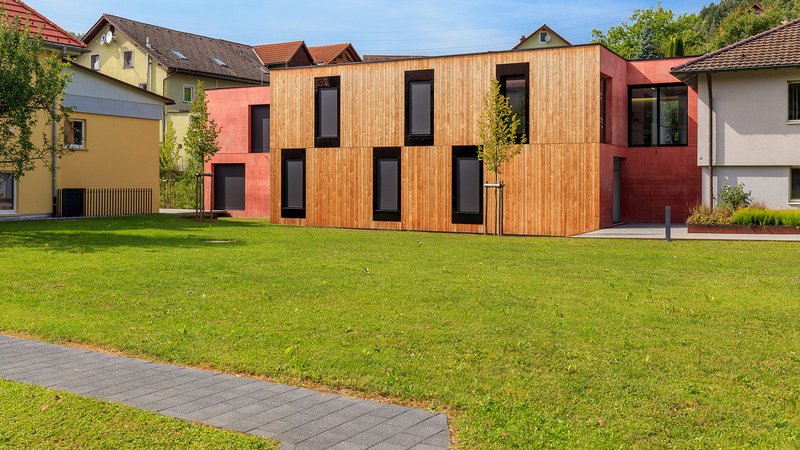 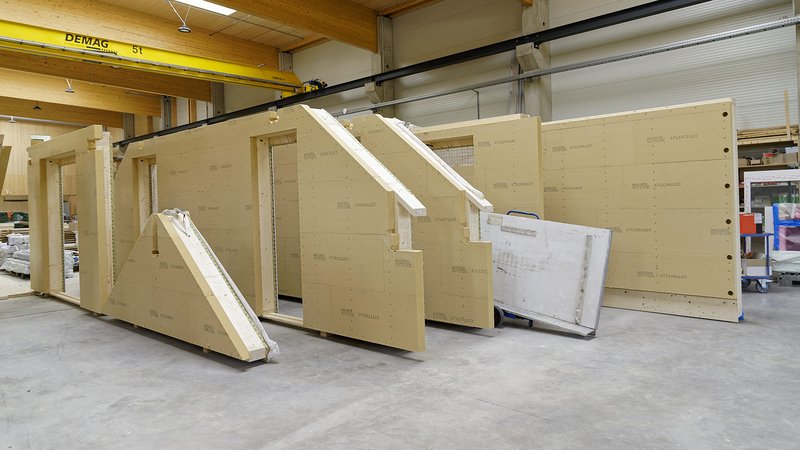 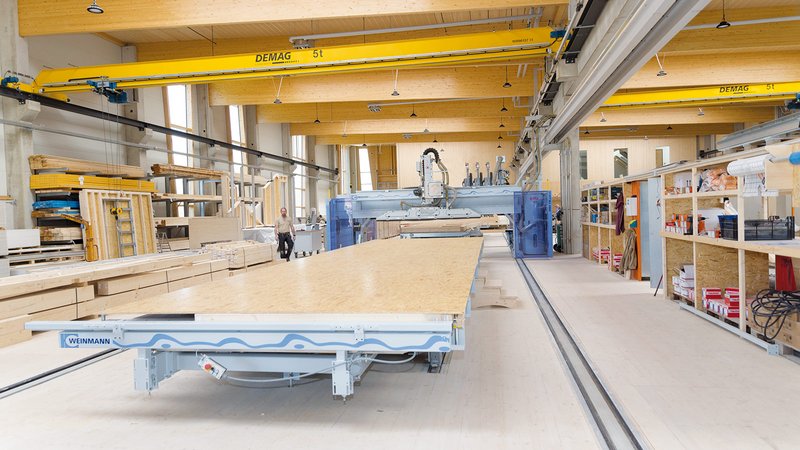 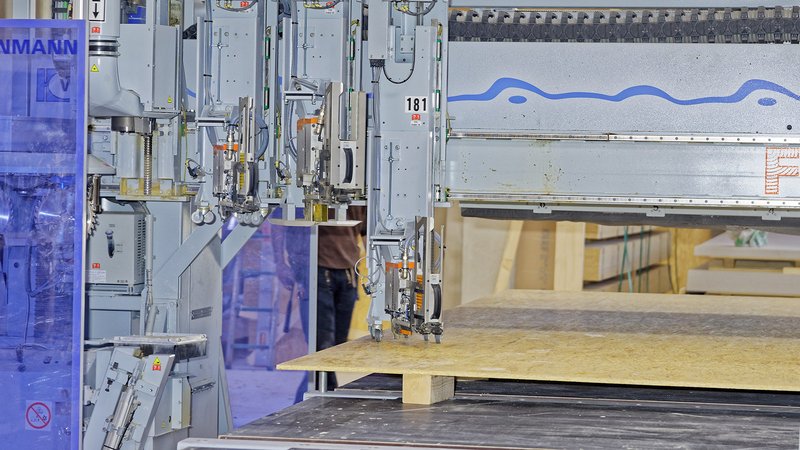 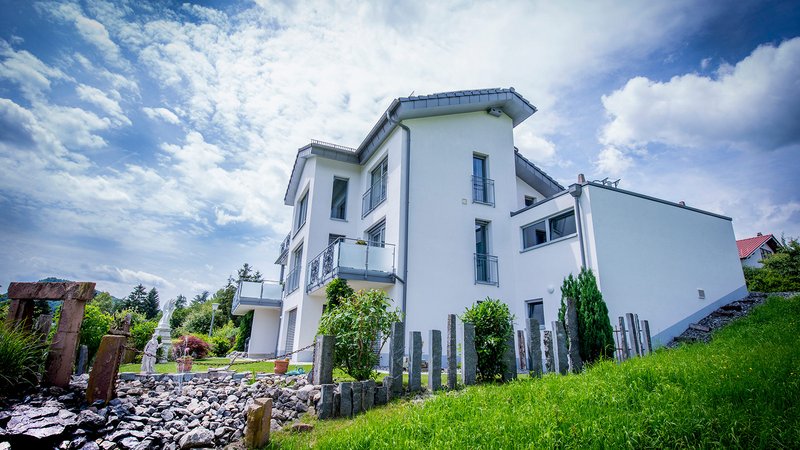 The employees can work on multiple frame works in parallel on one table. Photo: WEINMANN

Elements sealed on both sides are produced with the WEINMANN system. Photo: WEINMANN

A look at production on the compact system with integrated blowing plate. Photo: WEINMANN

One of around 40 house construction projects from 2017. Photo: Fluck

"With the machine we have absolutely perfect work results with a low rate of error, we don't have to do any reworking, the dimensions of the components are extremely accurate. The system works efficiently and reliably, and thanks to the high level of prefabrication, the added value has increased significantly.“

Fluck Holzbau in Blumberg (in the region of Baden, Germany) is still a young company, but it has already been able to pen a remarkable success story. A newly developed production technology, which allows timber frame elements to be insulated fully automatically, has contributed to its rapid growth.

In light of busy construction activity, increasing market shares, and full order books, timber construction is on a growth course. One of the pioneers of this trend is Fluck Holzbau in Blumberg in the Baden region of Germany. Founder Florian Fluck, who began timber construction in 2007, produced around 40 houses in his own company in 2017. This was achieved in a hall measuring 70 x 50 m built in 2016, in which a WEINMANN WALLTEQ M-380 was a world first. This multifunction bridge can process timber elements not just in the traditional way - with an integrated blowing plate, it also takes over fully automatic insulation.

The master carpenter built his first facility, measuring 16 x 20 m, at the end of 2006 with a few friends and subcontractors. Although it didn't have enough crane height, the young timber construction company developed well - thanks amongst other things to the proximity to Switzerland, where Fluck founded a branch in 2009. Since then, sales in the neighboring country have risen to approximately 40 percent of the total sales. In 2015, after several extensions to the premises, the company had achieved a total of 15 timber houses. The workforce had grown to 30 employees and in addition to building timber houses, the company also produced commercial buildings and classic carpentry. Everything pointed to growth after Fluck brought in a sales representative: "The completion rate was good, inquiries were soon exceeding our capacity." After several extensions to the premises, the 2000-m2 company site was no longer sufficient. Faced with these capacity problems, Fluck moved the company headquarters to a new industrial area. Directly adjacent to the B27 road, it offers the timber construction company optimal traffic connections. In addition to the new production facility site, Florian Fluck also purchased two further parcels of land as a growth reserve.

Parallel to the construction of new premises, the carpenter planned a technical modernization: "It was clear that we couldn't carry on as we were. We produced our timber house elements horizontally and transported them planked on one side to the construction site, where we then fitted, insulated, and sealed them. This wasted a lot of money. And we also wanted to grow. That meant that we needed more capacity, efficient production, new employees - so, attractive workplaces - optimized quality management, etc. etc. etc...." In light of the strong number of orders, Florian Fluck considered "a new beam processing system and a multifunction bridge from WEINMANN. But buying both at the same time was too big an investment." Because he was already working with a good beam processing center, he initially invested in one multifunction bridge and two work tables. Impressions from some plant tours also indicated that this was the right thing to do, but "my multifunction bridge should at least be able to blow in the insulation."

Although WEINMANN did actually have the first pure insulating bridge ready for delivery in the factory, the universal bridge that Fluck wanted for element processing and insulation was not yet on the agenda. Therefore, in Lonsingen, in close collaboration with the carpenter, WEINMANN produced a customized prototype tailored to his needs. This prototype could also lead to a quantum leap in production in other medium-sized companies. The WALLTEQ M-380 that Fluck has is fitted with a wide range of powerful timber processing units: one 18.5 kW main spindle with a 12-slot tool changer, one piggyback suction device, two stapling devices for quickly stapling panel materials, and one sliding shoe for gently attaching soft fiber wood panels. There is also a pick-up sawing unit for fast and precise cutting. The additional Isocell blowing plate installed on the WALLTEQ M-380 offers Florian Fluck the opportunity to fully automatically integrate loose insulating material in his timber construction in the production process. The multifunction bridge ensures correct positioning and transfers the data via an interface, while the blowing plate-as an autonomous unit-is responsible for blowing into the various cavities. This is even possible for small cavities and special shapes such as gable elements. The new production system offers Fluck numerous advantages. These include automatic control of the compacting of the insulating material via a weighing unit and the opportunity for a visual check on completion of the insulating process. There is also greater efficiency and a high level of flexibility in the selection of the insulating materials, including mineral and wood fibers as well as cellulose - which Fluck prefers. One particular advantage of the combination variant is the short idle times. The WALLTEQ M-380 is already in permanent use at Fluck Holzbau today and can quickly switch between insulating and element processing on the two tables. The short breaks in work will continue to decrease when Fluck soon starts to produce the internal walls pre-sealed.

When calculating profitability, WEINMANN assumes that timber construction companies using the new insulating technology will start to make a profit from an annual production quota of 30 houses. Fluck already has solid figures for the blowing plate: "Thanks to the material throughput which has rocketed and the minimized personnel costs, the plate will pay for itself in five years." There is already a significant result for the bridge after one year: "At the old site, with the same number of employees we needed approximately the same time for the production of the wall elements. But then the elements were only planked on one side. Currently, however we are producing both sides sealed, including insulation, electrical installation, soft fiber panel, windows, shutters or venetian blinds and the first coat of plaster." The WALLTEQ M-380 designed for 30-50 houses per year. This is exactly the right size for Florian Fluck, who does not want to expand any further at this moment in time. He continues to produce roof and ceiling elements on the work table he built himself. This is located in the front part of the hall and offers the opportunity of laying out roofs and ceilings for quality control. The rest of the hall is split into two: on the right-hand side the production with the multifunction bridge, on the left-hand side the station for window installation, an upright store, and the loading station with the swap bodies. This means that there are clearly separated routes for incoming and outgoing material.

From the workstations it is clear that with the move, Fluck Holzbau has revolutionized its entire production logistics. "Back then we had to learn and develop a vast amount," remembers Florian Fluck. No wonder that the carpenter remembers 2017 as more stressful than 2016, the year the premises were constructed. The colleagues from ZimmerMeisterHaus were very helpful in the development of new solutions, but in the end, Fluck developed a lot of the customized details himself. Because it was clear that this changeover would cost a lot of time and energy, in Blumberg the company had set a target of just 20 houses for 2017. In the end, they produced 40. "That was only possible because the WALLTEQ M-380 worked without any problems after a short infeed phase and because quite a few of the houses weren't turnkey houses," explains Florian Fluck. Nevertheless, the exorbitant growth caused a number of bottlenecks - the first one was in work preparation, in which not just significantly more tasks but also significantly more complex tasks had to be resolved. Once Fluck had eased the load by taking on a new employee, the order backlog went through the entire company like a wave: "After a few weeks, employees from the construction site had to help out in production, then we had a bottleneck in house assembly, and at the end, the subcontractors couldn't keep up." Because there is a long-term bottleneck here due to the increased construction activity, Fluck is currently considering taking over the interior fittings with his own workforce. The carpenter employed 13 new employees in 2017, increasing his workforce to 47. Finding new people was surprisingly easy: "Since we presented the new technology during an open day in 2017, carpenters have constantly been looking for jobs with us," explains Florian Fluck. With the additional personnel for interior fittings, in 2018 the company will level off with a workforce of 55 employees.

Customers are also very impressed with the technical advancement. Today, Fluck takes every interested party on a tour of the plant, "and everyone is impressed at the level of professionalism with which we build our timber houses." According to Fluck, this advertising effect is one of the benefits of the machine that should not be underestimated. In his eyes, the combination of processing and insulation works "exactly as I wanted it to. With the machine we have absolutely perfect work results with a low rate of error, we don't have to do any reworking, the dimensions of the components are extremely accurate. The system works efficiently and reliably, and thanks to the high level of prefabrication, the added value has increased significantly." The ability to react quickly and flexibly to requests received at short notice is another positive aspect, according to Fluck. "Together with the optimized quality, time, and cost management achieved by using the technology, that brings us attention from developers and architects who are also interested in our skills in sound insulation and fire protection." In Blumberg they already have a few of this type of iron in the fire, but first there will be a consolidation phase. "Now everything has to settle down, level off, and become more efficient. We also have to distribute the skills so that the managing director is no longer responsible for everything." Florian Fluck can then dedicate his time to customer meetings in the high-quality consulting rooms of his company. And to the plans for a new material storage. The old storage had already become too small again when they moved to the new premises.