O.K. Energiehaus has been using one of the most modern wall production facilities in Austria with automatic blow-in insulation for almost one and a half years. 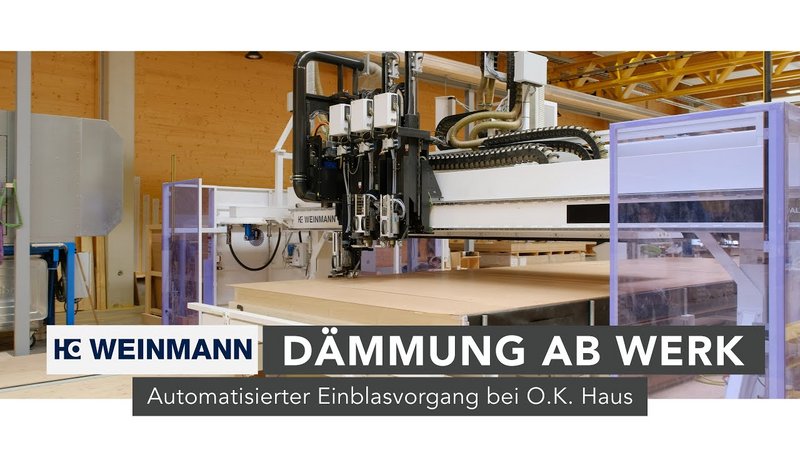 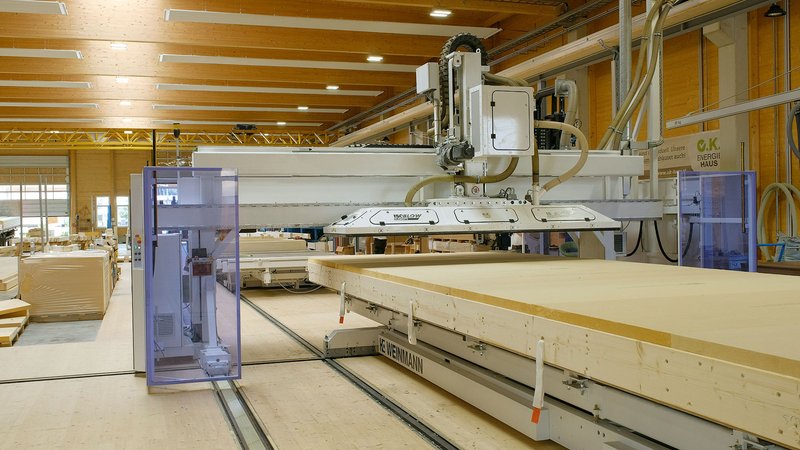 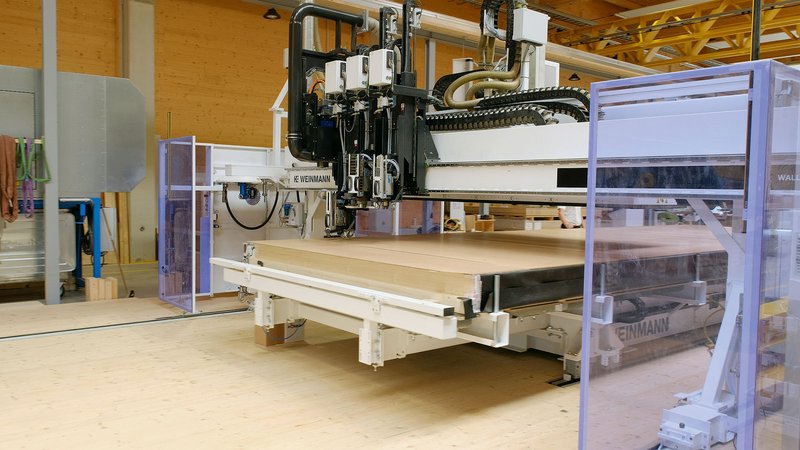 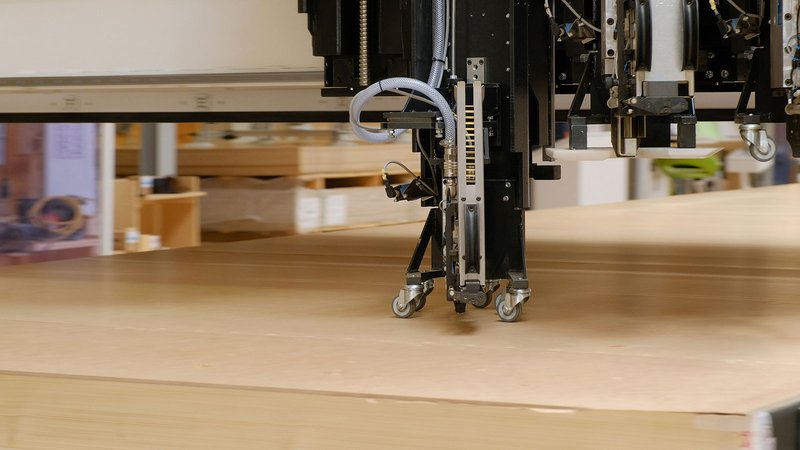 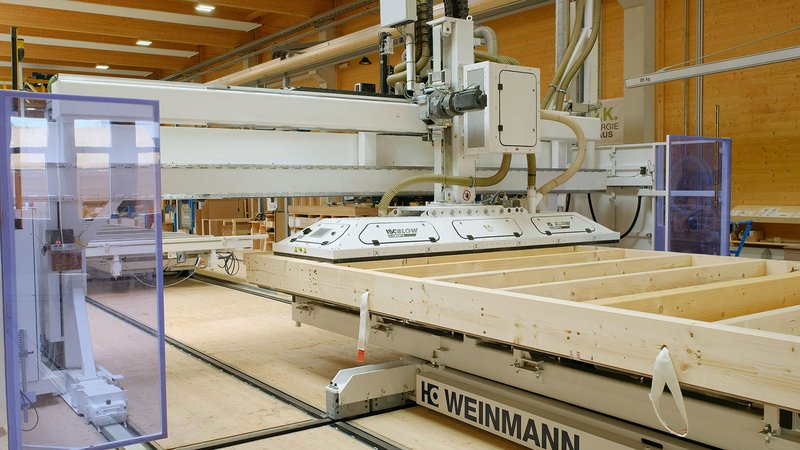 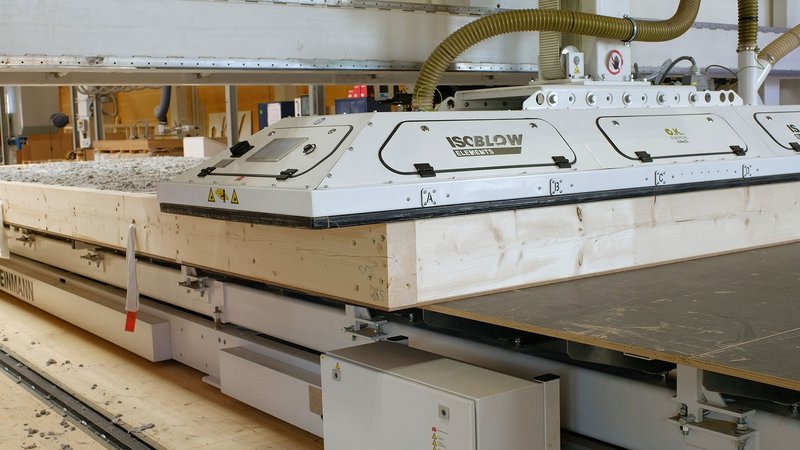 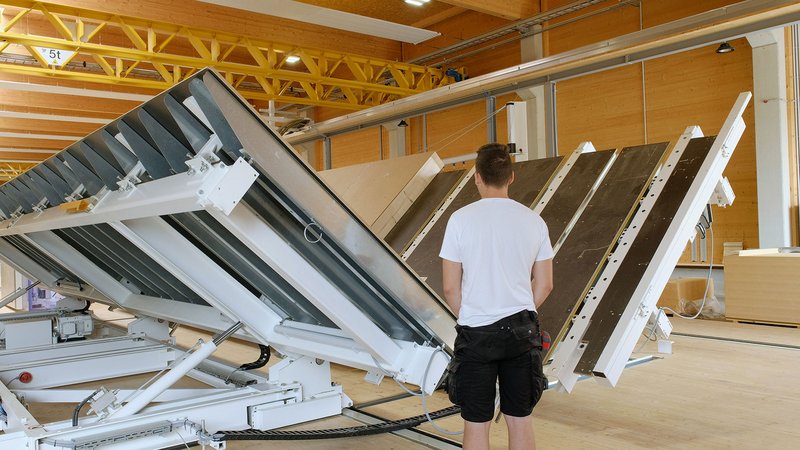 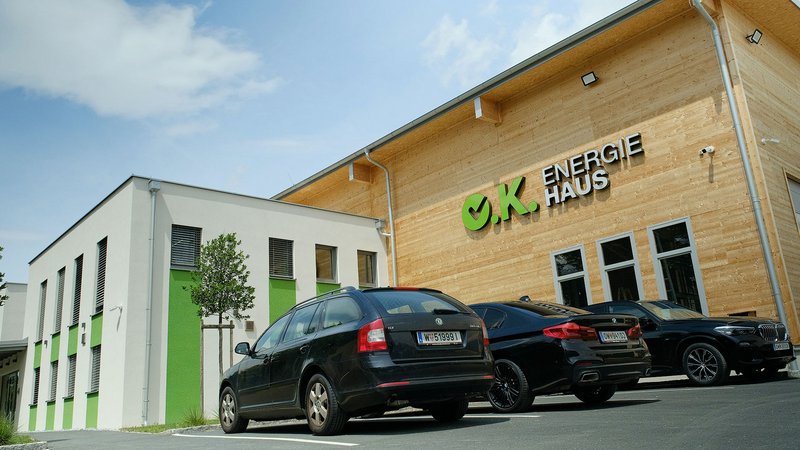 The production line consists of the WALLTEQ M-380 insuFill and two carpentry tables.

The CNC-controlled insulation plate lowers and blows in the insulation material evenly.

The CNC-controlled insulation plate lowers and blows in the insulation material evenly.

With the butterfly turner the elements are turned safely and quickly.

"The process is much more effective, especially logistically, because it is no longer necessary to deliver bales of insulation material to the construction site, but a finished wall."

An article from the magazine Holzkurier, issue 32/2020. You can find more information here.

Erich Krukenfellner and Michael Oberfeichtner founded O.K. Energie Haus 16 years ago. Since then, the company has developed rapidly, remembers Oberfeichtner: "At the beginning, there were just the two of us; now, we employ around 40 people at our site in Großpetersdorf." The technical developments in timber construction have also progressed swiftly, and Oberfeichtner remembers one exciting period: "Around eight years ago, we invested in a beam processing system — that was a massive step." The company has now taken the next step and purchased a multifunction bridge: "Previously, we worked in what you might call "the hard way." We had one wall and ceiling table and worked with manual tools. However, the number of orders was increasing, so we bought the new plant and as part of that upgrade, we also reconfigured the production hall at the same time." This reconfiguration brought with it a significant technical change in that the company began using organic fiberboard: "We were already using cellulose insulation but the big difference is that we now have a insulation plate that allows us to insert the insulation in the factory instead of at the construction site." Other aspects of the plant are more familiar: "We have our three fastening units, one trimming spindle and one tool changer. We have been able to do more of the construction site work in the factory — in a regulated processes under constant atmospheric conditions. As we all know, the time spent at the construction site is the most expensive and the machine has been vital in allowing us to successfully move more of this work into the factory."

The WEINMANN WALLTEQ M-380 works with two tables, explains Oberfeichtner: "We have a butterfly turning table. This means that we produce one to two walls on the first table, turn it to the second position and blow in the insulation on the second table, fill it with organic fiber and nail it down. While this is happening, the next wall can be placed on the first table and sheathed."

Oberfeichtner is visibly proud of the insulation plate installed on the rear side of the gantry: "That's the first CNC-controlled insulation plate in Austria. It has created an unbelievable increase in efficiency." Production employee Peter Jandrasits remembers just what it was like to work with insulation before the new system: "We cut mineral wool panels to size with a bread knife and inserted them or blew in cellulose insulation at the construction site. In summer in particular, that was delightfully irritating to the skin, as I'm sure you can imagine," he jokes. "Now, the work is great: I move the machine over the infill and I barely need to touch the insulating material at all. The insulation plate simply lowers and the material is blown in — it's distributed evenly and without producing any dirt in the hall. It's so much better." His boss is particularly impressed with the efficiency of the system: "It's much more effective, particularly from a logistical perspective, because I no longer have to deliver balls of insulating material to the construction site, just a finished and ready-to-use wall."

"Buying the beam processing system put us onto the right path toward digitalization, automation. That was the first big step we took. The next big step was our WEINMANN compact line, and that's a completely different way of working. After one and a half years, we can now safely say it's a complete success. The new production hall, the multifunction bridge and especially the insulation plate — they provide so many benefits, it's a dream."

The traditional O.K. Energiehaus from Großpetersdorf, Austria is a company with long-term experience in the field of wood. With a team of over 30 employees, the company puts all its know-how into ecological houses to build a home with a high feel-good factor.

Up-lifting and distribution trolleys STOCKTEQ U-330 | U-530

With the new compact line from WEINMANN, Holzbau Henz is producing elements at a consistently high quality and…