Having to increase production by 60% from one day to the next would not be easy, but it would be possible, says the technical manager of Elk-Haus, Ing. Markus Schandl. 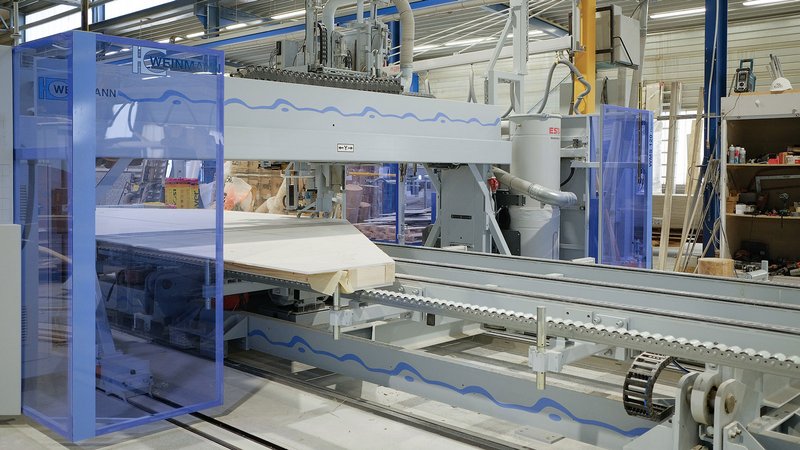 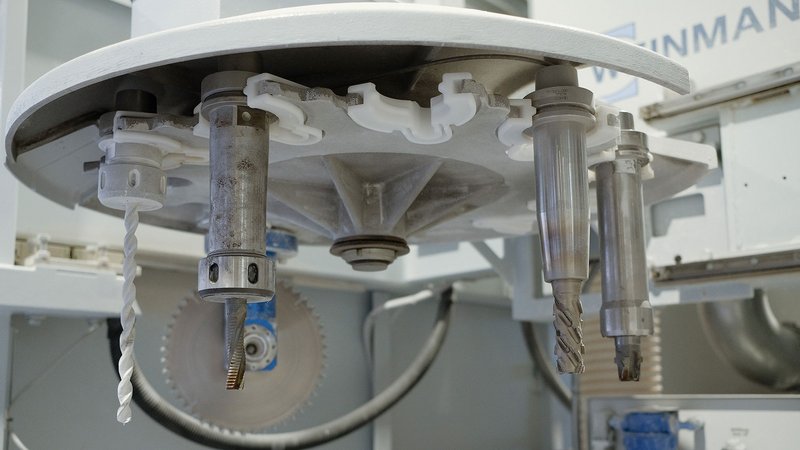 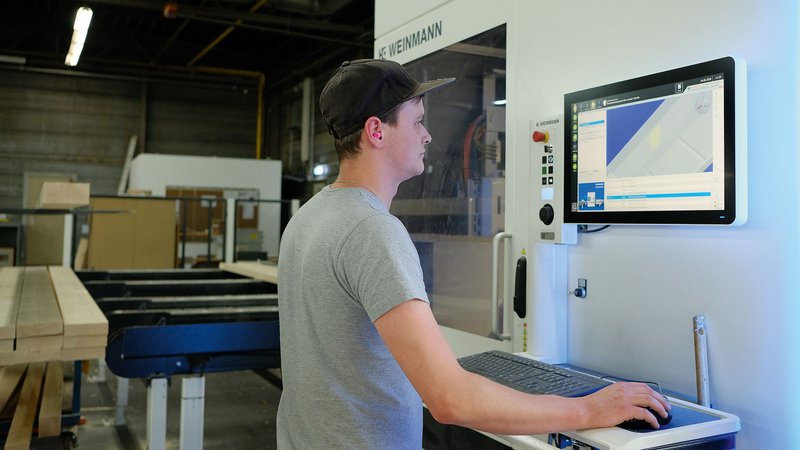 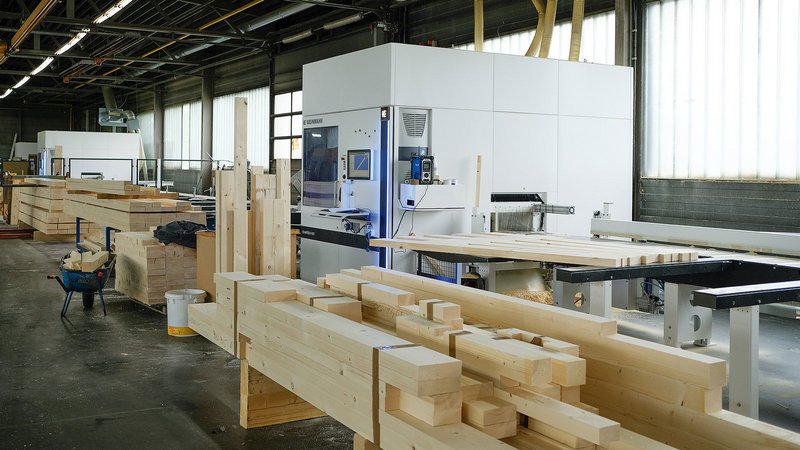 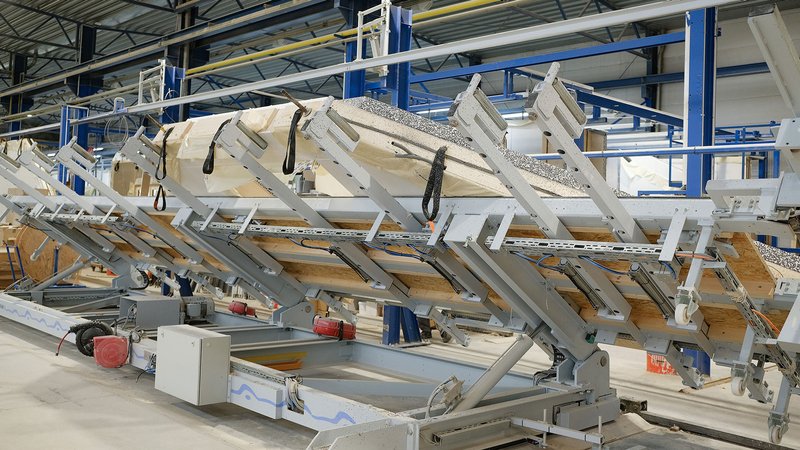 Elk-Haus works with a 3-table solution consisting of a multifunctiob bridge, a butterfly turning table and a third work table.

The WALLTEQ M-340 is equipped with a 12-fold tool changer for drilling, milling and cutting.

The software solution integrates the new and existing plants into a clocked process.

The two carpentry machines BEAMTEQ B-560 offer 6 and 13 m working length and work package-oriented according to production planning.

The elements are set up and transferred directly and immediately to the wall storage.

"The effort involved in adapting to our processes was thankfully low"

An article from Holzbau Austria, issue 04/2020. You can find more information here.

The new production line from WEINMANN was simultaneously both a pilot project for large investments in the future and the starting point for a far-reaching standardization of the process control technology in the company. In 2019, Elk concentrated the production of prefabricated houses from two locations in Schrems in Lower Austria, reports Schandl: "This meant that overnight, we had a capacity increase of almost 60% and a two-shift operation. The question was, what do we do? On the one hand, we wanted to modernize but we also wanted to continue production while renovating. WEINMANN was therefore very interesting for us; it was practically the only plug and play system that you can connect and then start production with. And most importantly, the system has been tested and proven in industrial production of prefabricated houses." After all, the company is still producing four houses per day at present, despite the coronavirus.

Compact and flexible with BEAMTEQ

The line – two BEAMTEQ B-560 carpentry machines with working lengths of 6 m and 13 m, one WEINMANN three-table solution with one WALLTEQ M-340 multifunction bridge and two turning tables, as well as six buffer positions – can also produce standard elements, of course, although it is used primarily for angled elements and elements with excessive heights. "The line produces the entire Zenker range, as well as all Elk gables and dormers, basically all of the angled elements." For the standard elements, the company has a larger main line, but this is less flexible due to the serial production. Changing the wall construction on the WEINMANN line requires a lot less effort, says Schandl: "We took the trouble of optimizing all the process steps previously performed manually by employees, thereby reducing cycle times. For example, the cycle times for hemp insulation or an intermediate plaster layer differ significantly from normal wall construction in series production. This is where we were able to get the most benefit. Flexibility was very important for the German market in particular. In Germany, above-average wall heights have become a trend — strictly speaking, no two houses look the same," says Schandl. "In principle, with this system we can produce walls up to a height of 4.5 m. However, from a transport perspective it's a different story — the limit for transport is 3.05 m. Anything beyond that requires special transport."

Process networking is the key to productivity

With the new line, all production processes were also networked: "We looked at all the systems available on the market. Of course, one factor was everything being available from one source because in this changeover year, we have also replaced and standardized our complete software, and established interfaces from visualization, through submission planning, right up to the creation of the machine data. A second aspect for our future planning, was that we could use the data from our Sema design planning to actuate the new WEINMANN systems directly. As we could not do this on our old systems, we had to install this granite interface - which optimizes our production data for all lines — in-between. This interface is easier, because from inventory management through flow and cycle time optimization, it gives me all the options for connecting systems, such as panel cutting. Breaking down these various islands was very important for our future expansion."

"Batch size 1 is the future"

"How can you capture the individual wishes of the customer in an industrial production process?" wonders Schandl. The customer expects their wishes to be fulfilled: "So everything comes down to batch size 1 production in industrial dimensions. Other sectors already do that and we are now attempting to apply it to an entire house." It goes without saying that strategies are being perfected for the future: "The question I ask myself is what will the prefabricated house look like in 15 years? I can easily imagine changing a lot about our methods of production. We have already put this into practice in the buffer for the new line. Window installation or plastering take place on the upright element. The low space requirements give me a greater buffer and therefore sufficient drying times. The small line is hence something of a pilot that has allowed us to gather experience for future investments."

Schandl is equally positive about the collaboration with WEINMANN. "The project was very successful. We were able to work productively right from commissioning. The effort involved in adapting to our processes was thankfully low. Yes, we are happy to have WEINMANN as a partner."

The company was founded in Schrems in 1959 and today employs over 1200 people. With branches in many European countries, the ELK Haus company is today one of the leading manufacturers of prefabricated houses in Europe.