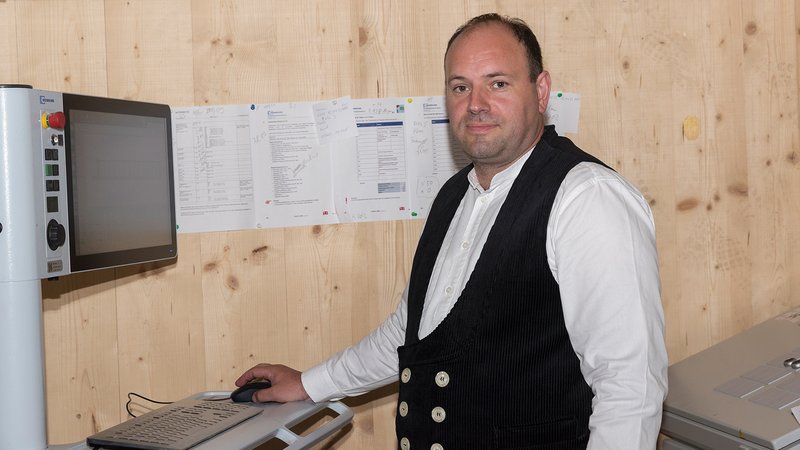 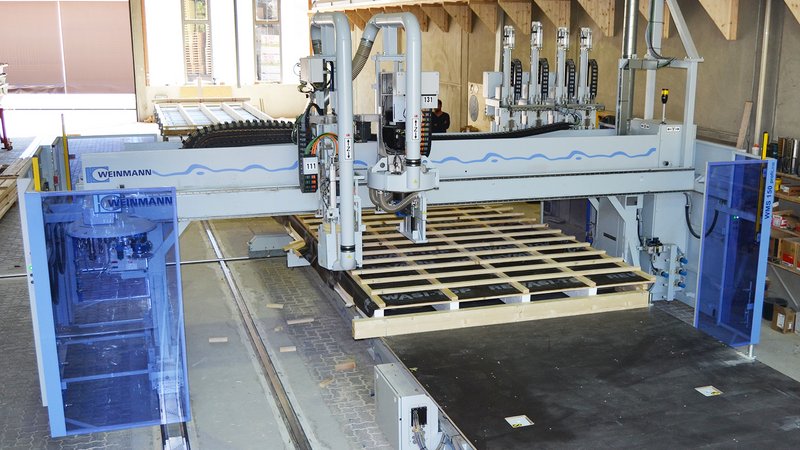 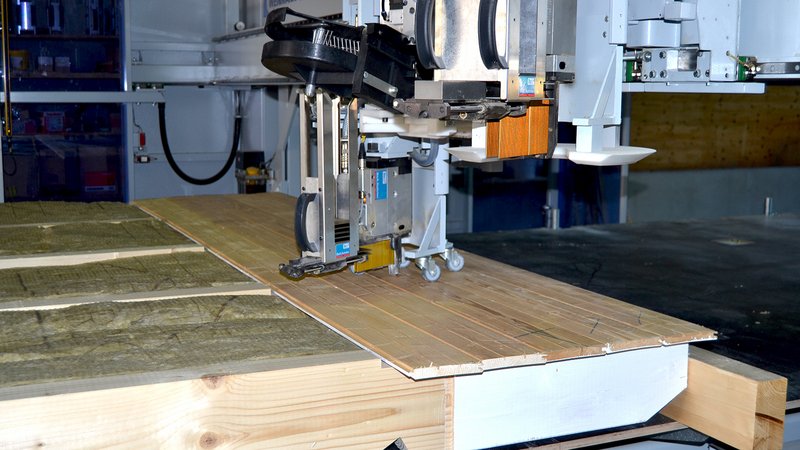 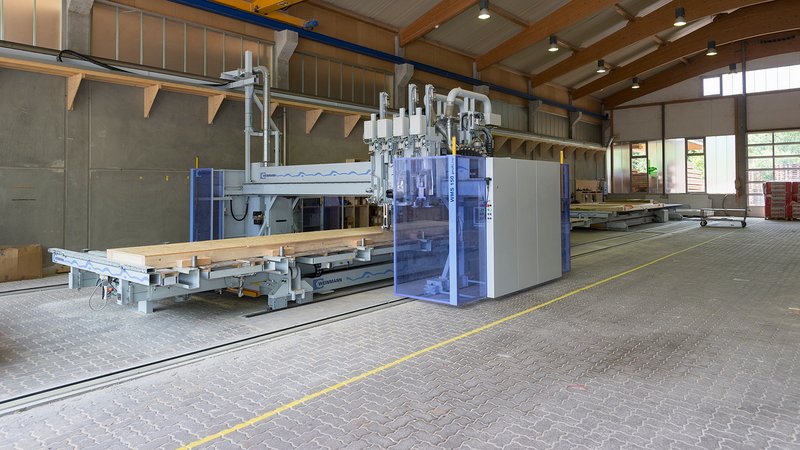 Among other applications, the machine attaches roof battens to the rafters

Wall elements are usually delivered closed to the construction site

An artikel from the magazine Mikado, 9.2017. Here you can read the article.

The automated assembly line, which he ordered from WEINMANN last year, had to be extremely versatile. He discovered just how versatile the assembly line was when it prefabricated free-formed pieces — a task that his beam processing system couldn't manage.

For several years now, trade timber work has seen panelization follow beam processing and become increasingly automated. Of course, there are other priorities compared to industrial manufacturing, where assembly lines process significantly higher quantities.
In addition to an increase in precision, the versatility of the automated assembly lines is particularly important for carpentry businesses. This is partly because all elements produced in the company should be processed on the line if possible, and partly because many carpentries do not supply standardized components to their customers, instead providing a broad spectrum of various wall, ceiling and roof elements. This also applies to Roland Zimmermann's carpentry business in Bad Peterstal-Griesbach, which invested in a WEINMANN compact system in spring 2016.

Free-formed pieces on the compact system

Roland Zimmermann wasn't aware of how versatile his new assembly line was until a few months ago, when he received an order to prefabricate components for a cupola for a customer in France. He noticed components in the plans that were not included in the order volume. After querying this in France, he received the information that he should also prefabricate the base of the cupola.
The base of the cupola comprises eight huge, overlying wooden rings, each made up of 16 interlocking ring segments. According to the manufacturer, the radii of these segments could not be processed on the beam processing system, which is why the carpenter had to find another solution.
At the time, the master carpenter recalled his training at WEINMANN: "In the back of my mind, I remembered from the training that there is a HOMAG program stored in the software package for my compact system, which can also produce free-formed pieces."
After contacting WEINMANN and HOMAG, work began on a solution: "Service engineers from both companies solved the problem for me. We bought special trimmers and test timber, HOMAG generated the milling paths for us, and in the end, we prefabricated the base of the cupola on our multifunction bridge.”

Flexibility "in all shapes and sizes"

These types of orders don't land on Roland Zimmermann's desk every day. However, flexibility was already at the top of his technical specification when he was looking for an automated element production system. Roland and his team of 10 employees don't just process standard carpentry orders such as roof structures, renovations, roof covers, or hall constructions. He is also involved in the residential construction sector, where he receives orders through word of mouth, from architectural tenders and from a cooperative developer. Roland handles these tasks within a delivery radius of around one hour's drive. In total, he receives roughly ten to 15 house projects a year, "in all shapes and sizes".
The latter does not just mean that he supplies his wall elements with or without installation levels and that the insulation thicknesses and materials vary. The carpenter occasionally moves away from wooden frame constructions and builds with TJI joists or laminated timber components that are fitted with external insulation at the construction site. The WMS 150 milled OSB panels for a shell formwork for one project, while for another project it formatted three-layer panels and provided several grooves before they were sent via container to Singapore as the roof shell.
With this in mind, the desire for flexibility goes without saying "and WEINMANN was the only company that could satisfy this. Other assembly lines might be perfect for standard wall manufacturing in a prefabricated construction, but individual external and internal walls, roof and ceiling elements, special and huge timber elements can only be processed by a handful of manufacturers on their machines."
Not to mention the processing depths: "We can process huge wooden elements or wood fiber insulation with a cutting depth of up to 200 mm with the Flex 25 unit on our machine."
In addition, the carpentry business' iWMS 150 can be configured individually and features three joint and clamp devices, an inkjet marker and the standard 18.5 kW tool spindle with 12-slot tool changer. The iWMS 150 is therefore a multifunction bridge with full equipment that sets any company up nicely for the future.

The carpentry business in Bad Peterstal is starting to prepare for greater prefabrication. Firstly, this is evident from the consistent growth in the degree of prefabrication. Whereas open wall elements used to be delivered to the construction site, they are usually closed nowadays. Ceiling and roof elements are also prefabricated on the compact system. Among other applications, the WMS 150 attaches roof battens to the rafters.
So that it works perfectly, the carpenters initially had to adapt a few details to the new production methods. "Today, for example, we work on the roof element joint with rafters parallel to the gables, partly because they are easier to turn. The vapor retarder and the housewrap in the roof elements have been optimized and modified against the production sequence."
In addition, the carpenters supplemented the work preparation parameters so that the WMS 150 receives all data that it needs for component processing: "It was a lot of work to begin with but it has paid off in the long run, since we have developed component catalogs that significantly shorten work preparation times."
Optimum processing strategies are also logged in these component catalogs. For example, a recess is not made from a single trimming action — at its ends, it receives a clean, right-angled finish from a saw cut.
Roland Zimmermann: "For the first time, you have to try to understand the method of the machine and the way your tools function to achieve the best results. If you set up a component catalog for the first time, the machine carries out all the necessary trimming actions and saw cuts in a fully automated process, such as if you build a window into an external wall element in the work preparation.
The windows are currently installed by an external window manufacturer at the construction site. Roland Zimmermann already has his sights set on the window installation in the production hall as the next step for increasing his company's degree of prefabrication. Whereas Roland previously had to pay for the processing of large wall elements made from cross-laminated timber, he now wants to format these elements himself on the compact system and thus provide openings for windows, doors and installations.

The huge wall elements processed in this way could then also be supplied as products for carpentry colleagues. This is a new area of business that has been created by automated production, and one which Roland hopes to develop over the next few years.
The carpenter also wishes to build on the supply business for timber frame elements. The firm in Bad Peterstal already has a customer base of medium-sized timber manufacturers without production equipment. However, new options are available thanks to the compact system. Roland said, "On the one hand, our performance capabilities have increased with the new technology, which means we can also offer short delivery deadlines for customers near Freiburg or Karlsruhe and beyond and we are able to handle work better at peak order times. This is important, since the delivery deadline counts in this industry.
On the other hand, our commercial customers also benefit from a higher degree of prefabrication. We are able to supply highly accurate closed elements that can be mounted quickly and easily at the construction site, which increases safety and allows shorter building times."
One of the hurdles that his carpentry had to overcome along the way was the external quality surveillance. Since April of this year, the company in Bad Peterstal has carried the Ü sign — a further plus point in terms of safety for Roland Zimmermann and his customers.
The new production technology also played an important role in achieving the certification: "Whereas auditors looked very closely at other areas of the company, the inspection of our manufacturing department was completed quickly. The auditor inspected the clean nail lines, measured one of them and then crossed it off his list." This was confirmation for the carpenter that he had done everything properly: "I therefore finally invested in a WMS 150 to achieve a consistently high level of precision in element production."

Technology as a marketing advantage

Not only does this precision mean greater safety; it is also an advantage when it comes to marketing to customers. Automated production also ultimately brings visual benefits, since the nail lines are dead straight and uniform, and the cut-outs in the wooden panels are much cleaner than the drill holes produced previously with hand tools.
Developers can therefore see for themselves how professionally products are made in Bad Peterstal at any time: "You shouldn't expect too much of course, since, all things considered, price is the decisive factor for many developers. But if we offer almost the same price as a competitor, we already have an important distinguishing feature. This mainly applies to architectural orders, which we predominantly win via tenders."
As to whether the new production technology is reflected in a cheaper price: "We can't say for sure at the moment, as we are still in the learning process. It's clear that production only needs two men nowadays compared to the four needed previously. But that is why we now have more work at the work preparation stage. By rule of thumb, I am saving a man compared to manual processing, which of course has certain cost benefits. We still have to see how much it is. It depends on the full utilization of the machine, among other factors."

Zimmermann is currently very happy with the utilization of the machines, and has since considered his investment highly profitable. "At the start it was not imperative, as we often had four men in production. This was because we still didn't know how things were going to work with the latest technology."
Did Zimmermann experience any teething problems with the new assembly line? "No, we didn't have many. We received excellent advice from WEINMANN and Sema regarding the investment beforehand, then we attended training sessions and production progressed quickly. And because the WEINMANN employee who was supposed to support us was ill during the first few days, we started without him.
Everything went well — only a bit of fine-tuning was needed at the start. And now if something jams, it can be quickly repaired via the hotline and remote service."
The new technology has also been well received by Roland Zimmermann's employees. "Because the order books were so good at the time, no one had to fear for their job. This meant everyone could see automation for what it truly was: a welcome way to make work easier. As a consequence, it was received enthusiastically. We have become considerably more attractive for specialists and trainees as a result."
The employees in the carpentry business have completed a total of 32 projects since the compact system was commissioned. In the years to come, the cycle frequency on the machine could increase significantly. Since the production changeover, Zimmermann has seen a growing trend in the supplier business for other carpentries.