Fit for the new standard

Modernization of the production line at SOCOPA in France. 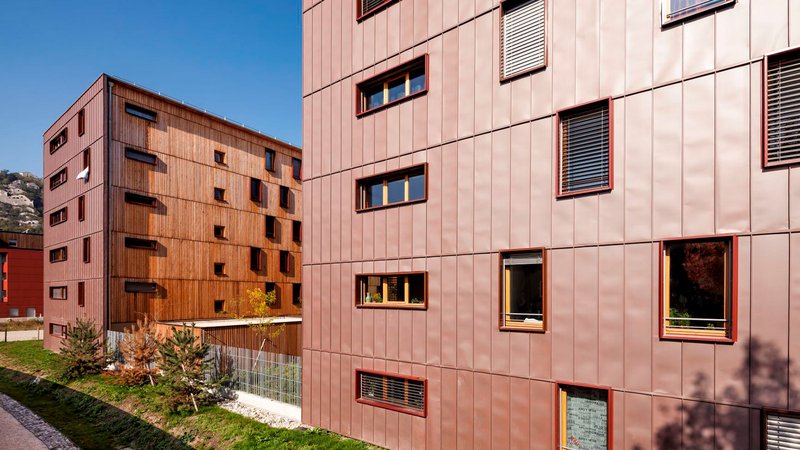 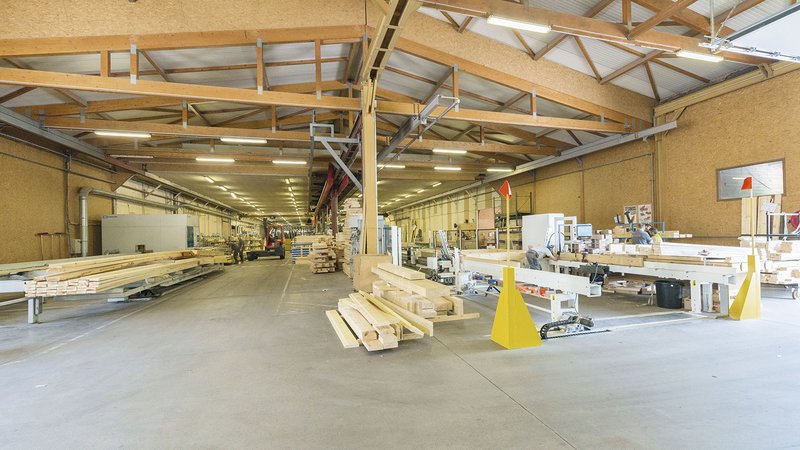 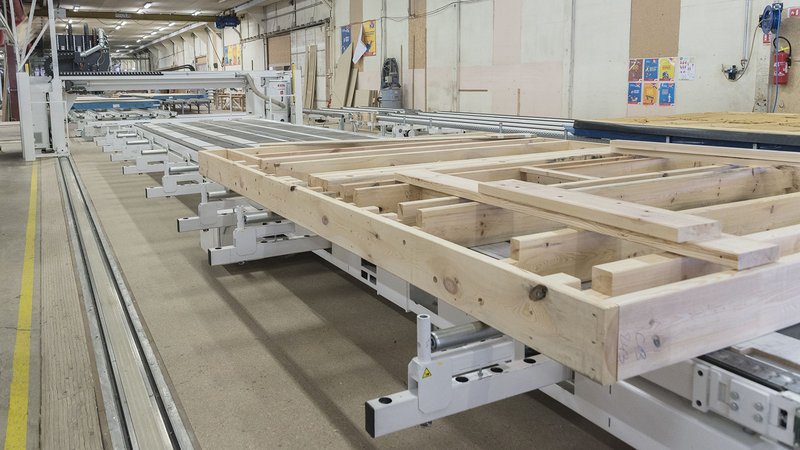 SOCOPA´s main business is the construction of public and commercial buildings.

In 2021, SOCOPA modernized and expanded the existing production line.

"In the end, what counted for us was our experience with WEINMANN Holzbausystemtechnik, which has been regarded as a professional supplier of automated production lines for timber construction on the market for many years."

A regulation is set to come into force in 2022 that will radically change the construction sector in France, require public projects to use a high proportion of natural building materials and mandate the use of better insulation standards and sustainable heating technology for all new buildings. For SOCOPA in the Vosges region of France, the more stringent technical requirements were one of the reasons the company decided to modernize its aging production line. Vagney-based SOCOPA was founded in 1962 and started building timber houses around 6 years later. Since then, the company has increased its turnover to 30 million, making it one of the largest timber construction companies in France today. The company's headquarters are located at the foot of the Vosges Mountains and the company delivers timber buildings to the north-east of the country, serving numerous urban centers such as Lyon, Grenoble, Strasbourg, Lille and Paris. The company's main business areas include the construction of public and commercial buildings such as retirement homes, schools, social housing, buildings for leisure activities, office buildings, media centers, medical centers and hospitals, tourist buildings and more. In addition, the company offers insulated wooden facades for new constructions and refurbishments and also builds single-family houses in Vagney, some of which are individual projects while others form part of larger, standardized residential estates. The company's target customer base consists of private, public and commercial developers, whereby the construction of single-family houses accounts for around one third of turnover, while the construction of residential and commercial buildings for public and commercial clients accounts for the remaining two thirds.

The Réglementation environnementale 2020 (RE 2020), a new sustainability law that reflects the increasing sensitivity of the state and society to environmental protection, played an important role in this development. The basic idea of this law arose while planning the Olympic Village in Paris for the 2024 Olympic Games — the buildings there (some of which will be more than eight stories high) will be built entirely of wood, which resulted in a boost for the timber construction industry in the country as a whole. Accordingly, RE 2020 stipulates that from 2022 onwards, all new public buildings should be made of at least 50 percent wood or other natural materials. The law also aims to reduce the country's CO2 footprint and therefore requires improvements in insulation and heating for all new construction projects. In this respect, it represents a tightening of the regulations set out in Réglementation thermique 2020 (RT 2020), which stipulated back in 2012 that buildings constructed from 2020 onwards should use the energy-plus standard. The fact that the precise technical specifications of RE 2020 have not yet been fully finalized as well as the introduction of more stringent energy standards has led to a foreseeable increase in costs, which has compounded the effect of higher material prices. The resulting rise in construction costs has led to private developers being increasingly reluctant to buy — all the more so since, at the same time, the conditions for financing your own home also deteriorated. Walter Mignot, technical manager at SOCOPA, therefore reports a decline of 50 percent in the construction of private single-family homes over the past two years: "We have primarily lost customers for low-cost starter homes — for example, young families. The customers who are still coming to us today generally have very good financial situations and are interested in houses in the upper price segment."
In contrast, demand for res-idential complexes has explod-ed. Walter Mignot: "In France, there are many groups that build and rent residential properties on a large scale — including in the form of social housing.
On the one hand, the developers in this area are public or private institutions that have a healthy level of capital. On the other hand, these clients tend to follow the general social trend for reducing CO2 emissions and, in terms of volume alone, they also want to compensate for the losses from the COVID-19 period. This has resulted in such a high demand for wooden houses that we can barely keep up. Another reason for this is that we were not able to grow as fast as we wanted to because of COVID-19 and price increases."

However, SOCOPA was not primarily concerned with increasing capacity when it in-vested in a new WALLTEQ M-120, a FRAMETEQ F-300 frame work station and three new work tables for its Vagney production facility in 2021. After all, the company was already well positioned technically, having started using a WEINMANN multifunction bridge with assembly table in 1990, which was supplemented in the following years by a carpentry machine and quickly expanded into a production line consisting of several tables. This was done with a view to securing the business of developers in the commercial and public sector: "This is a business area that we opened up for ourselves at that time by investing in automated production," explains Walter Mignot. "In some of our markets in this sector the pressure to meet deadlines is very high, which means that orders cannot be processed manually in the desired time. In addition, this is an area in which using an automated production line—for example, when constructing large residential estates with a number of identical houses—can make particularly good profits thanks to the high degree of standardization." In 2021, the existing line was modernized. On the one hand, this was simply because it had become old. On the other hand, the company also wanted to improve ergonomics in the workplace by adding more automation steps — especially in the frame work production process. This was done not only to make work easier for the employees, but also to enable the company to offer an attractive workplace in the face of the rampant shortage of staff in France. In terms of capacity, the 20-year-old production line was still competitive, even if the software was not up to date and production tolerances arose due to the long operating time. However, the stricter requirements imposed by RE 2020 led to another fundamental problem: "RE 2020 requires more insulation and therefore greater wall thicknesses. In addition, the wall heights have to increase because more insulation is required in the threshold and ceiling areas," explains Walter Mignot. "The demand for higher walls will therefore increase in the future, but we were unable to produce these dimensions on the old system. Since we would need to modernize sooner or later anyway, it made sense to replace the technology before the new standard came into force."

Security and confidence were the deciding factors

As the company's experience with the first WEINMANN production line in its Vagney production facility was very good, the company also obtained a quote from Lonsingen before starting this modernization project. The company also shopped around with other providers: "They also had interesting offers but in the end, what counted for us was our experience with WEINMANN Holzbausystemtechnik, which has been regarded as a professional supplier of automated production lines for timber construction on the market for many years," says Walter Mignot, summarizing SOCOPA's position. "With this type of far-reaching restructuring, we were primarily concerned with security and confidence in a tried-and-tested supplier."
This confidence proved to be worthwhile in the end, even though COVID-19 led to material shortages last year that resulted in the delivery of the new technology being delayed and the line being installed later than planned. "WEINMANN supported us by providing rental machines during this phase so that production didn't come to a standstill," recalls Walter Mignot. Since the new line was commissioned in October 2021, the company has been producing wall elements in Vagney that, with a height of up to 350 cm, are already compliant with RE 2020 — even though the exact specifications of the law will probably only be finalized by a specific technical regulation in January 2022. Until then, the company will continue to work with a cavity insulation of 150 mm, an external insulation of 60 mm and an internal insulation of 50 mm, which is slightly above the average level of its French competitors. Have the company's expectations for the new technology been met? "In terms of ergonomics absolutely; in terms of capacity and productivity, we will also see an increase once all the workflows have become more established. Problems with the old software are a thing of the past, and the error rate for the components has decreased — not because the old machines were worse, but because we no longer have wear-related tolerances," concludes Walter Mignot.

The latter is of particular importance in the commercial and municipal sectors, where maximum quality is particularly important. However, the fact that the new system can also produce components a little faster is of interest only to the commercial clientele: "Here, emphasis is placed on a short construction time, which ensures a higher return on in-vestment. There is also a strong trend toward turnkey construction, which is almost standard now for individual single-family houses. On the other hand, SOCOPA generally supplies public clients with the finished house shell with wall elements that are closed, fitted with windows and plastered. Less emphasis is placed on the construction time here, because the contacts in this area still think in terms of traditional workflows, which are derived from conventional construction methods. "This is why these customers cannot benefit from the advantages of prefabrication and lose a lot of time in their projects unnecessarily," Walter Mignot is sad to say. In order to prevent this, they would have to get involved in a complete plant planning phase in the run-up to the project: "Instead of starting from finished walls, into which holes are trimmed for the installation, they would have to think about the "holes" before construction starts." It is safe to assume that this attitude will gradually change as a result of the government's push for timber construction through RE 2020.

SOCOPA, based in Vagney, is one of the largest timber construction companies in France, with a turnover of 30 million euros. It was founded in 1962 and entered the construction of timber houses just six years later. The company's main business areas include the construction of public and commercial buildings such as retirement homes, schools, social housing, buildings for leisure activities, office buildings, media centers, medical centers and hospitals, tourist buildings and more. In addition, the company offers insulated wooden facades for new constructions and refurbishments and also builds single-family houses.

More information you can find here.

Tecverde was founded in 2009 by a group of young entrepreneurs, with the purpose of making the Brazilian…

Affordable living space in a large city? There’s no such thing! This is the experience of people who are…