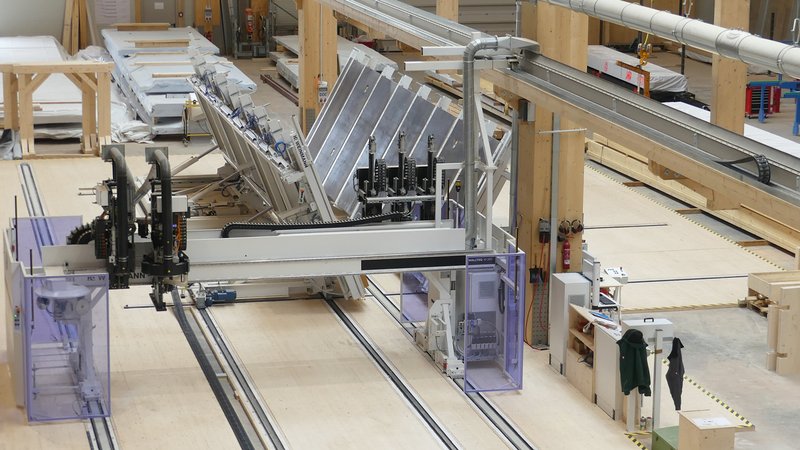 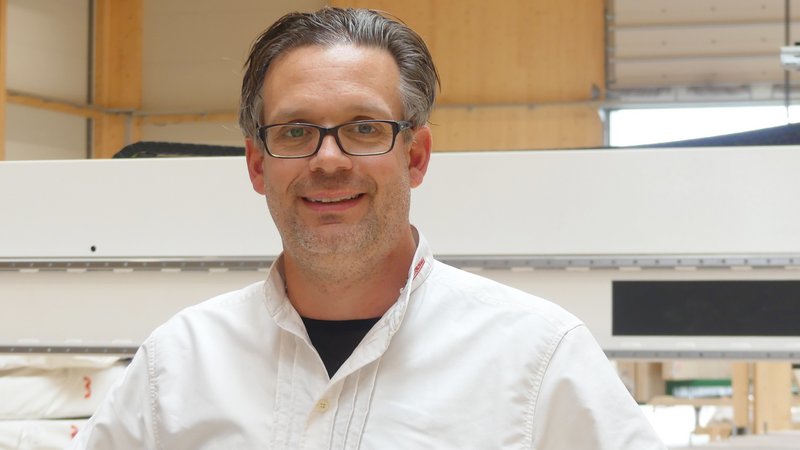 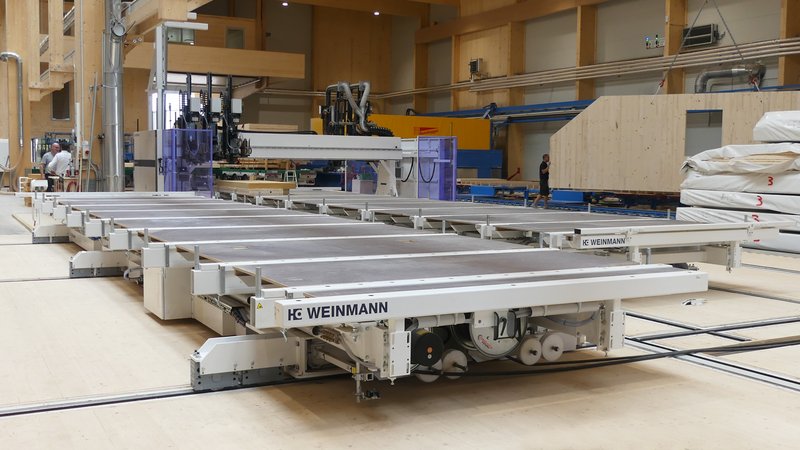 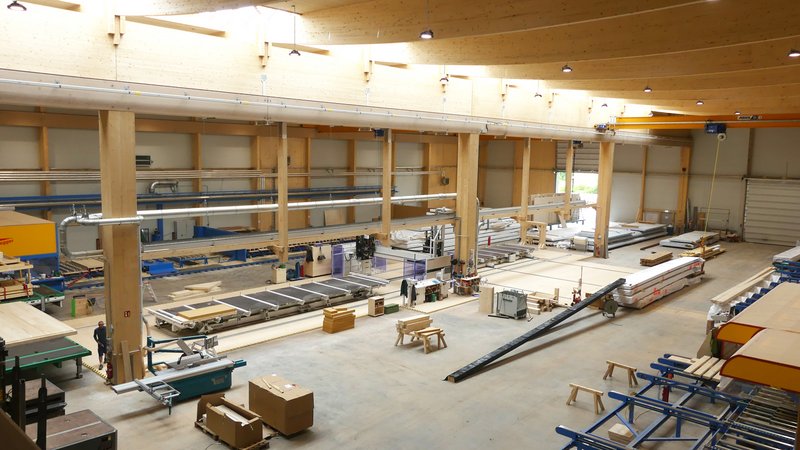 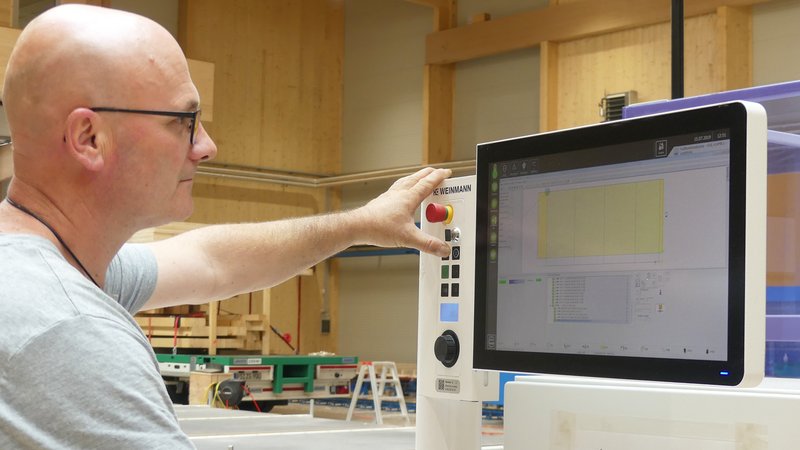 Jürgen Gottschall is the managing director of CLTECH. Photo: WEINMANN

Soft wood fiber can be cut to a depth of 200 mm with the sawing unit integrated on the multifunction bridge. Photo: WEINMANN

After processing, the cross-laminated timber components are finished on the compact system. Photo: WEINMANN

The production line includes a WEINMANN compact system as well as a gantry processing center and a beam processing system from Hundegger. The production area covers 4500 m². Photo: WEINMANN

“We can manufacture something different every day, without having long setup times.“

An article of the magazine "Der Zimmermann", edition from 09.2019. Here you will find the original report.

Because each CLTECH project is unique, it is especially important that automated production can offer a high degree of flexibility. A higher level of prefabrication means increased capacity for CLTECH, as well as improved quality and customized production.

Zimmerei Gottschall has been producing wood-frame detached houses for more than 40 years. Over time, the business has expanded its areas of expertise to include commercial construction and the use of cross-laminated timber components. Increasing demand was pushing the carpentry business to the limits of its capacity, which meant it was no longer able to undertake projects for long-standing customers. The owner of the business, Jürgen Gottschall, therefore made the decision to increase the size of the business. It was clear to him that the only way to achieve this was to increase the level of prefabrication, which would also address the ongoing issue of the shortage of skilled woodworkers. According to Jürgen Gottschall, "Each year the number of people employed in wood work decreases, while the demand for wood work increases rapidly. For me, prefabrication was the obvious solution, so I set out to significantly increase the level of prefabrication and therefore reduce personnel requirements at the construction site. To do this, tasks should be automated in the production facility." In addition to overcoming the issue of the shortage of skilled workers, prefabrication offers further advantages to the company. By moving tasks into the production facility, they are no longer so dependent on the weather. Furthermore, the quality of production that can be achieved inside the facility is significantly higher than what can be achieved on the construction site. It would also be more difficult and more time consuming to try and achieve this level of quality on the construction site. These developments prompted Gottschall to establish a new company: CLTECH GmbH & Co. KG. He moved Zimmerei Gottschall production to CLTECH in Kaiserslautern, just under 30 km away, to set up automated production there. The cross-laminated timber area was also expanded. The new building was ready for production in a very short time. Construction of the production facility began in November 2018 and production started in Kaiserslautern on April 4, 2019. Today, 15 employees work at the new site over a production area of 4500 m² and an office space of 500 m². Gottschall plans an annual production of approx. 15,000 m² worth of elements.

This motto is very important to Gottschall, which can be seen in the new production facility. The entire building was made using cross-laminated timber construction and timber engineering, which can be seen in both the production area and the offices. The aim was to celebrate the sustainability of wood work in the company's own production facilities as well. "Our new production facility is completely energy self-sufficient," states Jürgen Gottschall. There is a large photovoltaic system on the roof of the production facility, and the entire building is heated using the residual heat from production. Because the photovoltaic system produces more energy than is consumed, the remaining energy is fed back into the national grid. "I wanted to practice what we preach and be able to show our customers exactly what we're selling to them — an energy-saving building."

Every building that CLTECH produces is customer-specific: "we don't do series production — they're all customized constructions." This was one of the most important factors in the design and selection of the production systems. The systems needed to be flexible enough to allow a different type of wall, roof or ceiling to be produced each day without requiring time-consuming changeovers. Therefore, CLTECH decided on the compact system from WEINMANN. "The system enables maximum flexibility. It was important that we could produce a large number of different elements on one system, including both cross-laminated timber components and wood-frame construction elements, as well as wall, roof and ceiling elements. And this was the only system that could do this." The compact system consists of a WALLTEQ M-380 multifunction bridge as well as two BUILDTEQ A-570 carpentry tables, which allowed CLTECH the level of flexibility it needed. To additionally increase the level of prefabrication for post and panel-processing tasks, the company also invested in a Hundegger K2i industrial beam processing system and a gantry processing center.

With this new machine technology, CLTECH is now able to produce the majority of the processed components themselves. Posts and panels are processed with the beam processing system and the gantry processing center, which are separate to the main production line. The processed components are then processed further on the compact system, which is located in the middle of the hall. The compact system is also used for producing complete wood frame constructions for wall, roof and ceiling elements. On the first work table, the frame work is created and the sheathing is attached. Then, the integrated units on the multifunction bridge are used to secure the sheathing materials and for shaping and processing. The two carpentry tables are used to turn the element and the required installations are inserted. The element is closed and the panel materials are secured and processed with the multifunction bridge. Full thermal insulation in the form of a soft wood fiber board is attached on the external side of the wall and elements such as a Fermacell panel or gypsum plasterboard are attached on the room side. Depending on the project, the windows are also installed in the hall. In the last step, the base render is applied with reinforcement fabric. A similar process is followed for producing cross-laminated timber components, which are also finished on the compact system. Full thermal insulation is applied on the external side and a Fermacell panel on the room side. To allow the heavy components to be turned with the carpentry tables, the tables are reinforced so that even the heavier weights can be turned with the tried-and-tested turning process. For Gottschall, it is particularly important to increase the level of prefabrication for cross-laminated timber components. "This allows us to close the shell of the building faster, even for buildings with multiple floors. This has been possible for a long time in wood frame construction, but I wanted to be able to do it for laminated timber components too. We've tried it and not seen any issues." The arrangement of the production systems offers Gottschall an optimal work process with short paths. The finished elements are placed on swap bodies and transported directly to the construction site; they are not stored.

Quality boost in the planning stage

Transferring to automated production not only increased the level of prefabrication and the flexibility; Gottschall is also seeing a significant increase in quality. "Elements are square and the dimensions are accurate. This consistently high quality is difficult or even impossible to achieve on the construction site."
The increase in the level of prefabrication has also changed the requirements for the planning processes. Significantly more precise and more extensive planning is required beforehand, which has increased the amount effort involved in work preparation. Gottschall sees this as a positive effect, as it increases the overall quality in the planning stage and eliminates time-consuming rework on the construction site. "More time is spent on work preparation, but it gives is a better planning quality. This would also have a positive effect on manual production as any difficulties are detected early."

Throughout the entire planning process for the new production system, the focus was always on a higher level of prefabrication and ensuring the required level of flexibility. "One requirement of the investment was the option for both wood-frame construction and CLT processing. And that's exactly what we got — we can produce something different each day without the need for long changeover times." This is also necessary given the range of tasks at CLTECH. Products range from detached houses to commercial construction and even multistory buildings with up to six floors. The construction of commercial halls makes up the largest part of the business. Opposite the company's site in Kaiserslautern, they built a commercial hall with 17-m-high eaves, clamped timber supports and 50 m of unsupported wooden trusses. For a hotel expansion, hotel rooms were completely prefabricated and installed as a building module at the construction site. And as far as the markets are concerned, CLTECH is quite diversified, having completed projects across Europe — including in France, England, Luxembourg and Majorca. In 2008, the first passive apartment building was produced in Strasbourg. According to Gottschall, the wood work market will continue to grow in the coming years: "I am convinced that wood work still has a great growth potential and will become increasingly important, as we can see in the construction of multistory buildings." To take advantage this potential and to be able to meet the increasing demand, the level of prefabrication must be increased. This increases capacity and ensures a consistently

CLTECH GmbH is active in the sector of single-family house construction, as well as commercial construction. At the new site in Kaiserslautern, 15 employees are currently working on 4,500 m2 of production space and 500 m2 of office space.

Prefabrication as the key to success

Marlegno increases its production capacity with the WEINMANN compact system.