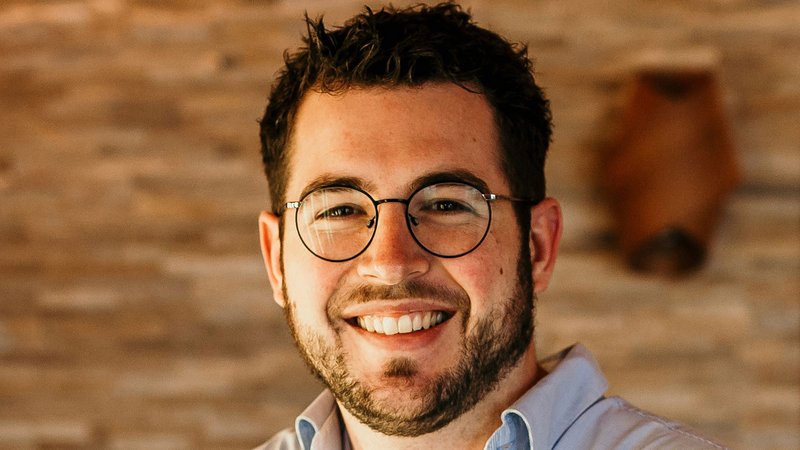 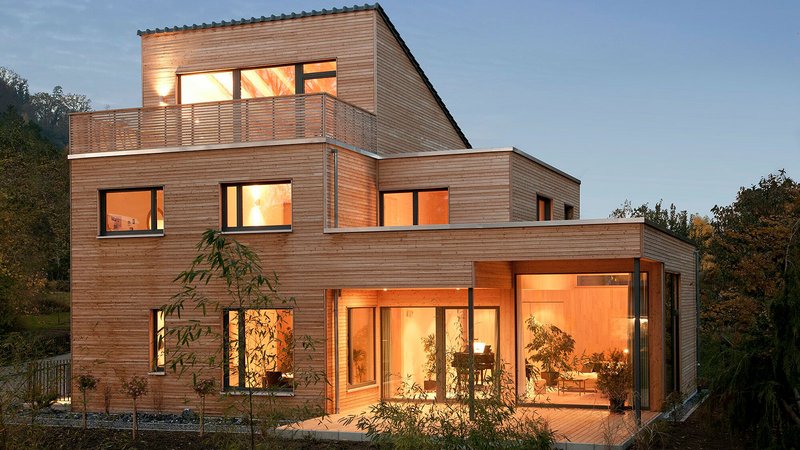 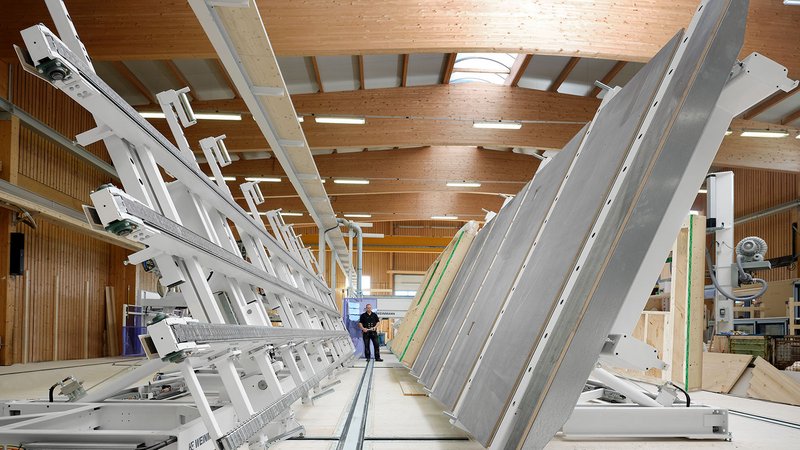 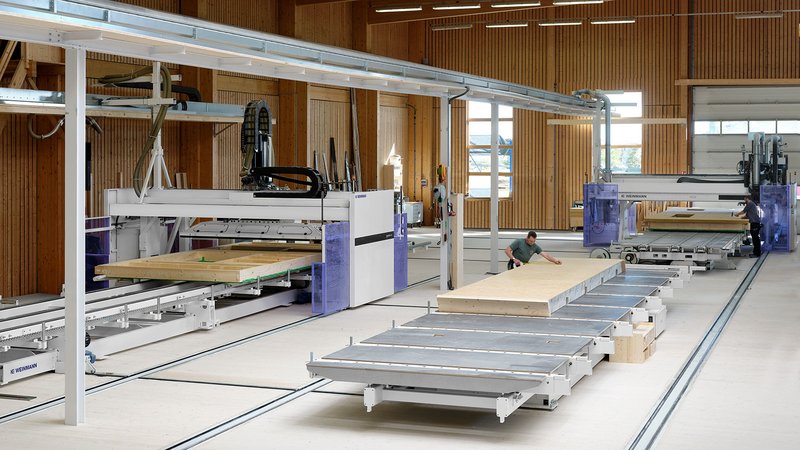 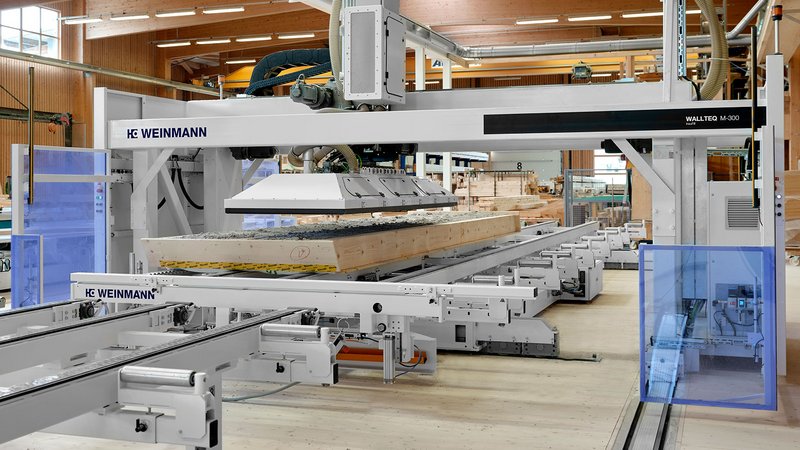 Florian Hegar has been managing the company together with his father Bernhard Hegar since 2018. Picture source: HolzHaus Bonndorf.

The houses of HolzHaus Bonndorf are built with completely glue and foil-free wall constructions.

With the WEINMANN butterfly turning table the elements are turned around allowing to process them on the other side.

"When it came to consulting and problem-solving that was so closely oriented to our needs, WEINMANN was unrivaled."

In cooperation with WEINMANN, Holzhaus Bonndorf GmbH in the Black Forest region had prepared the automation of its element production so well that the commissioning of the new production line was practically just a formality. Founded in 1995 by Bernhard Hegar, Holzhaus Bonndorf GmbH immediately stepped into the area of timber house construction. By 1997, the company, located in Bonndorf (Black Forest), had expanded its delivery radius to neighboring countries and built its first timber house in Switzerland. At present, the company in Bonndorf builds approximately 40 single-family homes per year for private customers.
Around 5–6 years ago, the company entered the field of multi-story timber construction, whereas up to that point, only buildings with a maximum of four full stories had been constructed. However, Florian Hegar sees his main business in building class 3, which is currently enjoying particularly high demand. In addition to single-family house construction, the company achieves a total number of around 50–60 residential units.
In 2021, given the heavily increasing demand, the company invested in an automated three-table system from WEINMANN that was equipped with a WALLTEQ M-380 and a WALLTEQ M-300 insuFill. The system was put into operation in August of the same year. Florian Hegar, who now manages Holzhaus Bonndorf GmbH together with his father Bernhard Hegar, had a particular focus on his employees when investing in production: "We were primarily concerned with achieving a more ergonomic workplace: We wanted employees to be able to work comfortably at hip level with-out spending a large part of the day on their knees and balancing heavy nailing devices across the hall." As a result, the employees were the focal point of the restructuring: "As bosses, we merely co-moderated this process; ultimately, it was the employees who decided which production line was put in the hall." For the junior managing director this was an important success factor: "If you completely change your production from one day to the next, you can only succeed if you involve your employees. If not all of them are enthusiastic and on board, the plans will go belly-up." The acceptance of the new technology was correspondingly high in the company. "As the employees were involved in the design of the new production line, they were all really keen to see it in action too. This was even truer when they clearly recognized the how the new technology would benefit them and understood how important this development step was for our future."

Amongst other things, this step was important because of the move into the field of commercial construction — reason number two for the investment: "Only with modern machine technology can timber construction companies offer larger properties in a relatively manageable production period," explains Florian Hegar. This goal was achieved with flying colors in Bonndorf: After the investment in the automated production line, production capacity doubled. On closer inspection, it has risen even further. Because all eight employees were retained in production, process steps could be moved from the construction site to the hall, and today, the company achieves a higher level of prefabrication with double the quantity: After the restructuring, for the first time, exterior wall elements left the production hall with the plastering already completed, including the empty pipes for the electrical installation. The third reason for the investment was the desire for consistently high precision: "We were already very good in this regard manually, and already had an efficient quality management at that time," explains Florian Hegar: "But if I increase the number of units and thus put more pressure on manual production, at some point it will be difficult to maintain quality going forward. We then have a higher rate of rework to do on the construction site. Automated production can minimize quality fluctuations because the machine has the higher repeat accuracy." Quality is a central issue for Holzhaus Bonndorf GmbH, since it offers a demanding target group in the upper price segment of energy-efficient, high-quality environmentally friendly timber buildings at a fixed price – which can also be turnkey, if required. The com-bination of modern production technology and traditional craftsmanship is an excellent match for the target group of the timber construction com-pany. Further advantages of automated production for Florian Hegar: The synergy effects of serial construction can be better exploited and risk is distributed more broadly, because large-scale projects now run through production in half the time, single-family homes can be prepared for delivery much earlier. If there are delays in a large project, it is much easier to push a single-family house flexibly into production. In order to maintain this flexibility, in Bonndorf, commercial construction is currently limited to around 40 percent of the total business. This is even truer since the new production line is already being used to its full capacity and is being operated with a two-year order lead time.

In view of the good business situation, the company took a very careful approach to the restructuring. In addition to involving the employees, this approach included allowing a one-year lead time for the work preparation to support a seamless transition to automated production. During this time, WEINMANN offered Holzhaus Bonndorf the opportunity to send plans from the work preparation to Lonsingen for correction. This meant that even before the new technology was implemented, a large part of the machine processes had been optimized and many standard details had been stored in the company's own database. The support from Lonsingen was similarly intensive when it came to planning the hall. The goal: "We wanted to achieve the highest possible level of prefabrication in a limited space, and for this we had to look at aspects such as the flow of material in the hall in addition to the system technology." The flow of material had been problematic during the time of manual production because many paths crossed in the hall. The company got together with the contact partners from WEINMANN, simulated the workflow in a 1:50 model with miniature forklift trucks and redesigned the entire hall. The rail system, which the company wanted to use to organize the installation of windows, finishing and transport to the loading station in Bonndorf, was also included in the overall planning. "WEINMANN had a very good approach to this," recalls Florian Hegar: "First we looked at the existing production processes together, then analyzed the potential and on that basis optimized the processes. WEINMANN always had an eye on the entire process. Only then did we look together at which system was the best match now." In this phase, WEINMANN definitively outperformed potential competitors for the timber engineer. "When it came to consulting and problem-solving that was so closely oriented to our needs, WEINMANN was unrivaled. This was also because throughout the entire restructuring process, the same team of employees were always there for us. For us, this was important: anyone who disassembles their production when the order books are overflowing needs to have a great deal of trust in their partners."

In view of the excellent planning and preparation, the commissioning of the new production line was a mere formality: "We had a short run-in period and we were running the system at full load after just two months. During this time we never fell below the numbers for manual production, and it took us only three months to understand all the tricks and to have the system running as we wanted it."
Since then, the new system in Bonndorf has been manufacturing all wall, ceiling and roof elements. Up until now, the latter had been produced on a full-surface element production table. "Even in this area, we never fell below the manual production numbers. I am sure that within one year we will achieve significantly higher quantities with the new production line — with a precision and level of accuracy that already leave no wishes unfulfilled." Of course, in Bonndorf, they are learning other things too — which above all means that they can exploit further possibilities of the new technology. For example, where so far the wall elements were built with the installation level and empty pipes to complete the actual installation on the construction site, there is now an electrician in the hall who completes the electrical installation before delivery. Florian Hegar: "We will stay at the installation level because we do not want to damage the sheathing that acts as a vapor barrier, but in future, this level will consist of an AGEPAN panel into which the WALLTEQ M-380 will cut the cable channels. The walls will then leave the hall completely sealed, including the preparation of the sub-distributors and switch cabinets, so that we have shorter assembly times on the construction site." This will allow the personnel shortage that is currently affecting timber construction, especially in assembly, to be further absorbed by the prefabrication stage.

HolzHaus Bonndorf GmbH was founded in 1995 by Bernhard Hegar and is located in Bonndorf in the Black Forest. From the beginning, the company manufactured wooden houses and in 1997, the first house was already built in Switzerland. Today, with more than 90 employees, the company builds about 40 single-family houses a year for private customers and is also active in multi-story timber construction.

The charm of serial construction

Due to the impact of the strained material situation, Materio GmbH has increasingly focused on project…