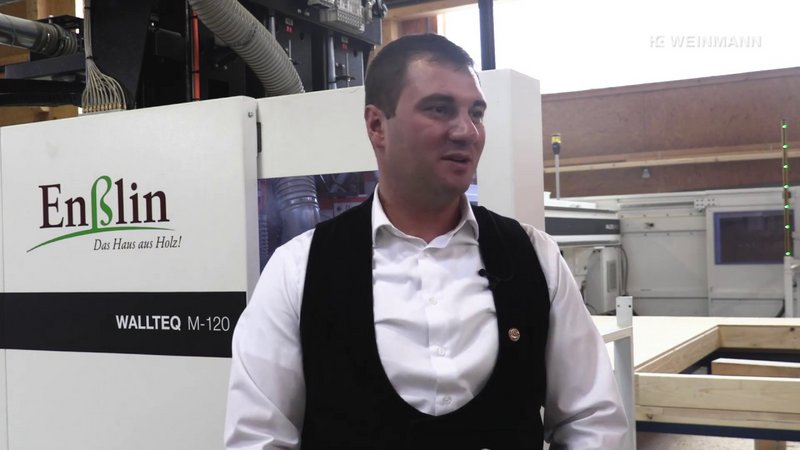 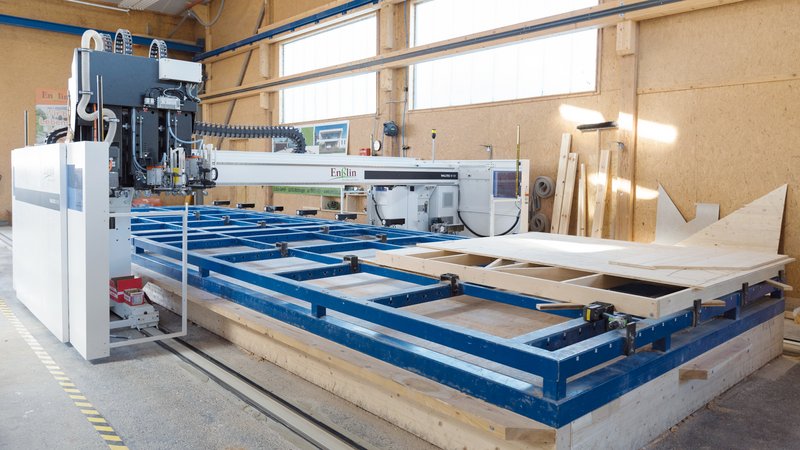 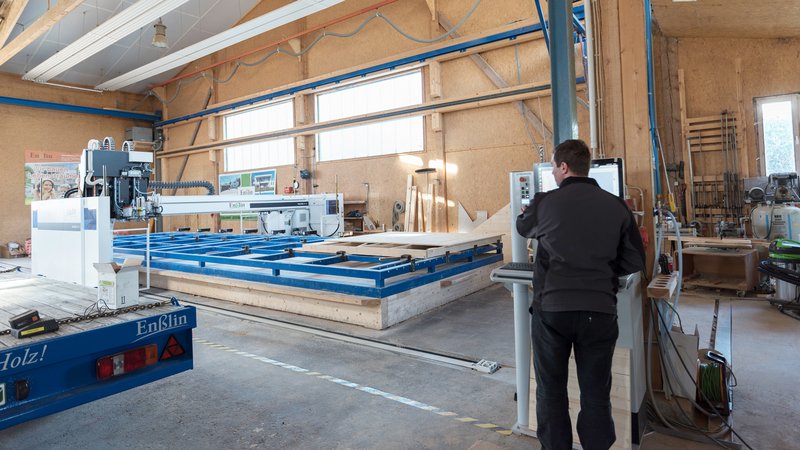 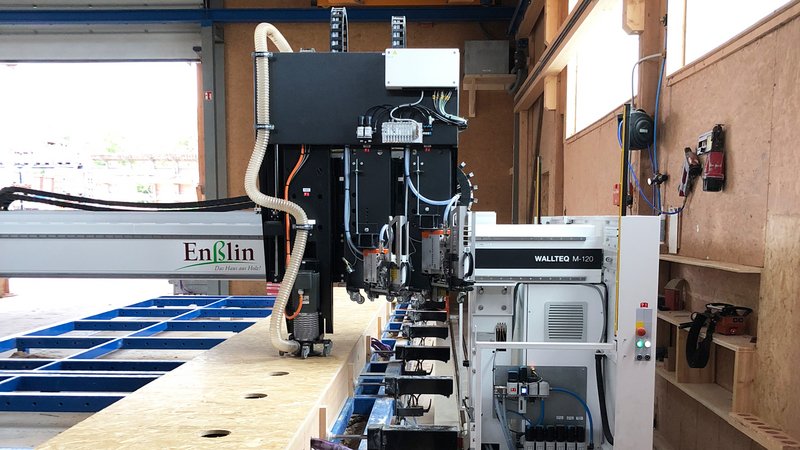 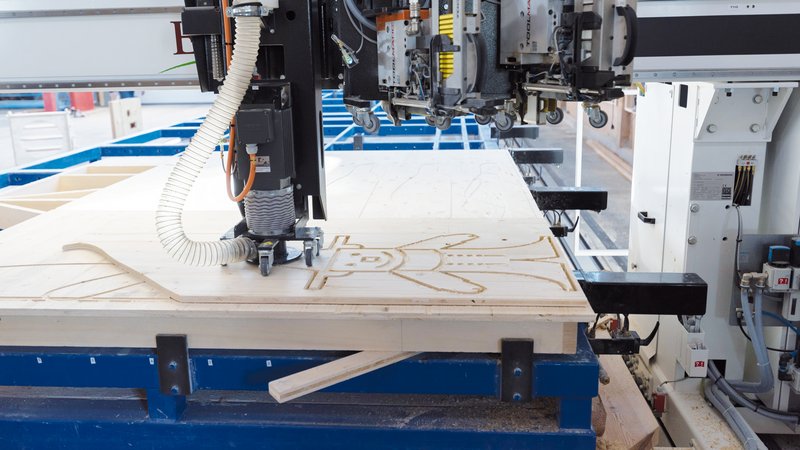 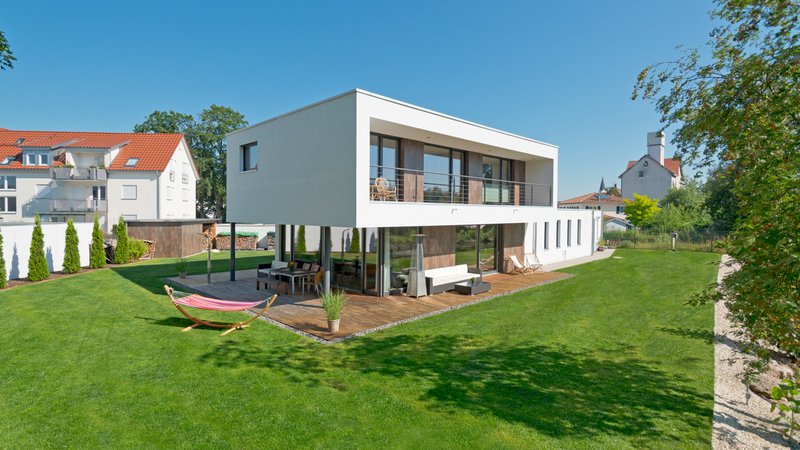 One of the advantages of the WALLTEQ M-120 is the relatively low space requirements. Photo: WEINMANN/ Mohr

The machining data can be taken from the CAD program or entered manually on the machine. Photo: WEINMANN/ Mohr

Drilling and routing are no problem with the multifunction bridge and the associated software. Photo: Zimmerei Enßlin

Freeforms can also be designed with the new bridge. Photo: WEINMANN/ Moh

Due to the shortage of skilled labor it became more and more difficult to work off the increasing order backlog. The solution was the automated element production with the WALLTEQ M-120 multifunction bridge. Stefan Enßlin tells us more about the new production process.

Mr Enßlin, what gave you and your father the idea of modernizing production in your company?

Enßlin: It's something we've been thinking about for a long time because it's becoming increasingly difficult to find staff. However, the machines that have been available so far have been over our budget. But because we were increasingly struggling to meet the rising level of orders with the existing personnel, the issue still remained. In 2017, we attended WEINMANN Treff in St. Johann, where we came across the brand-new WALLTEQ M-120 multifunction bridge. As an entry-level solution in CNC manufacturing, it's designed for timber work companies of our size and it can be used profitably in the production of wall, roof, ceiling and gable elements for even small quantities. Added to that are the small space requirements, high level of precision from modern CNC technology and production in batch size 1 - all with an acceptable investment cost.

So, in other words, it was what you had always been looking for?

Enßlin: Absolutely. We were so impressed that we actually placed our order at WEINMANN Treff. The machine was delivered at the beginning of May, and the WALLTEQ M-120 then took over production almost straight away. The introductory phase was scheduled to last six days, but we were able to run production without any support from WEINMANN after just four days. At this point in time, we had already produced the elements for our first house. You have to understand that, since 1993, we had been planning all of the elements in a CAD system and had corresponding standards for this in our company. So the changeover wasn't so severe, even though we had to invest a couple of hours in adjusting the work steps to the machine processes. Of course, we made small adjustments to the multifunction bridge later on to match our requirements, for example with regard to suction when trimming thick soft wood fiber panels. But the equipment and processing scope cover our needs perfectly: Today, the speed that we achieve in production is one that we are nowhere near taking full advantage of with our current quantity. We also need one less employee in production, and we have been able to reassign this employee to assembly.

Were there other objectives that you wanted to achieve with the investment?

Enßlin: Yes - for example, we wanted to do something for the employees and make the workplace more appealing in the company. And this is something we have achieved: Employees involved in element production are impressed by how much easier their work has become and the new technology has also been well received in house assembly. Precision in production has remained at the same level, and so all of the parts fit together extremely well. Some of the work has also become easier - thanks, in part, to trimmed beam supports as well as to useful increases in the level of prefabrication. All of these aspects mean that less time is required for assembly, which, to some extent at least, compensates for the shortage of employees on the construction site.

Do you have plans to expand the business now?

Enßlin: Probably not. The number of employees in assembly is already tight, so can't think about increasing quantities at the moment. However, with the WALLTEQ M-120, we have opened up a new area of business, and we now occasionally produce free-formed pieces for companies in the region. The fact that we are able to do this is thanks to the woodWOP software from HOMAG, which also significantly reduces the amount of material waste.

For over 25 years, Zimmerei Holzbau Enßlin has been building innovative wooden houses in traditional frame construction. They invest a lot of attention to individual wishes and ideas of their customers and all aspects of sustainable construction.