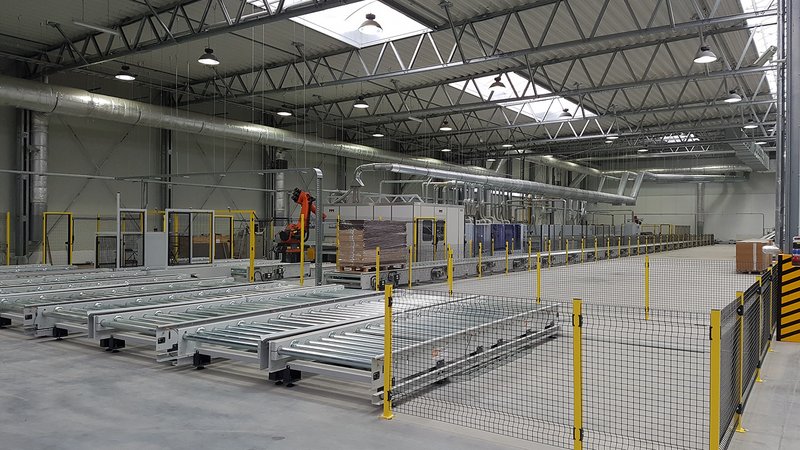 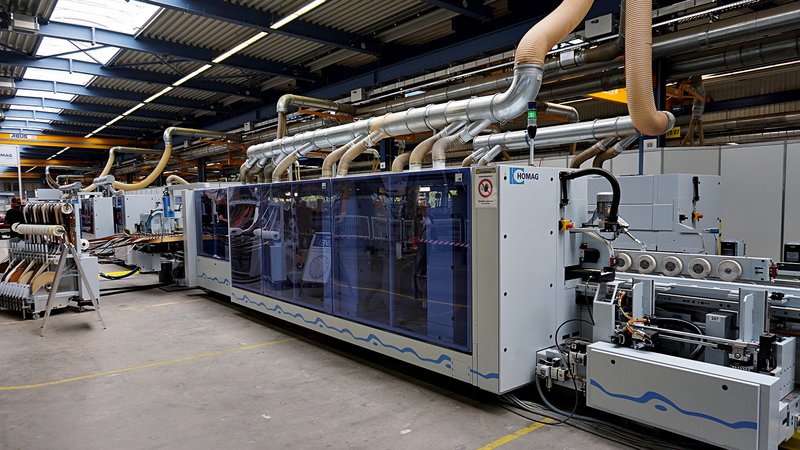 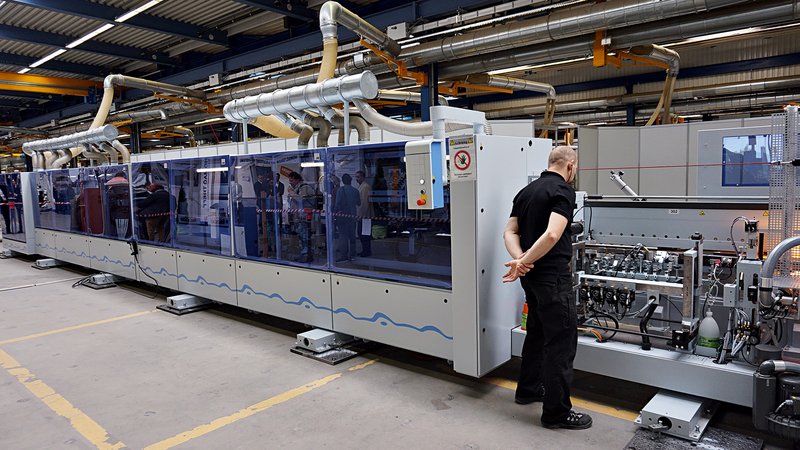 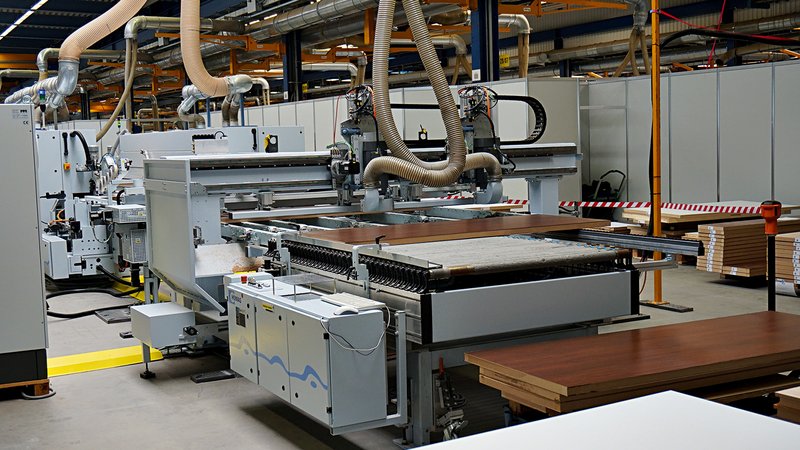 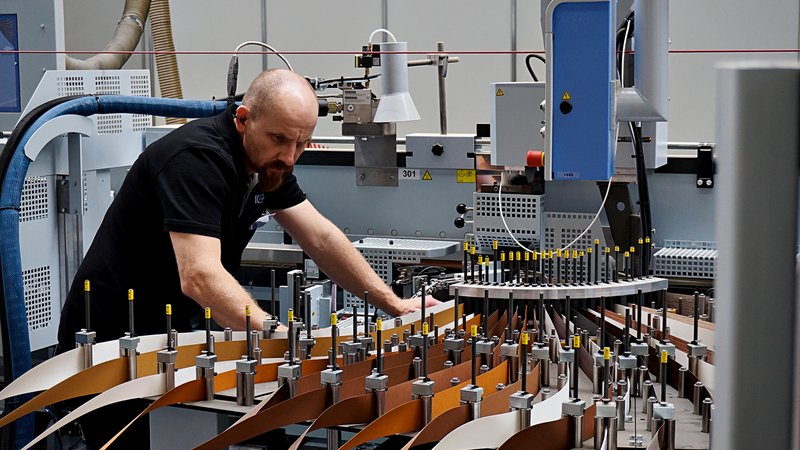 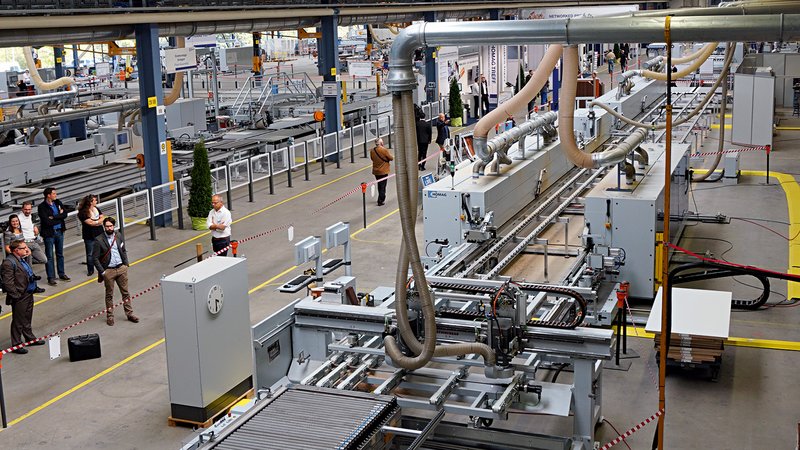 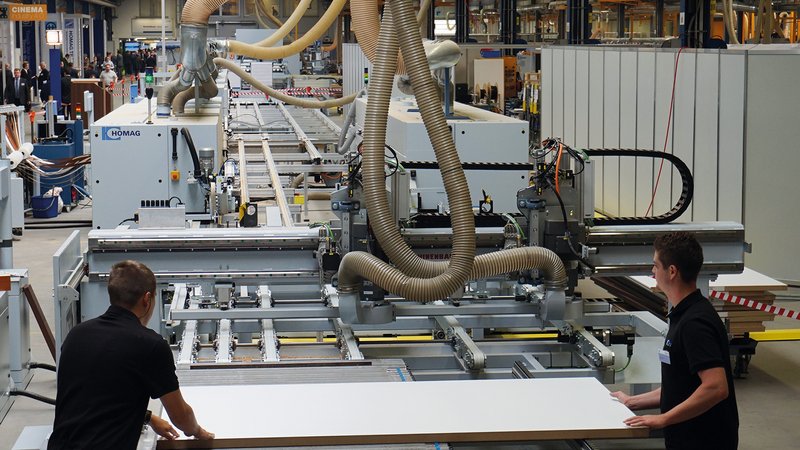 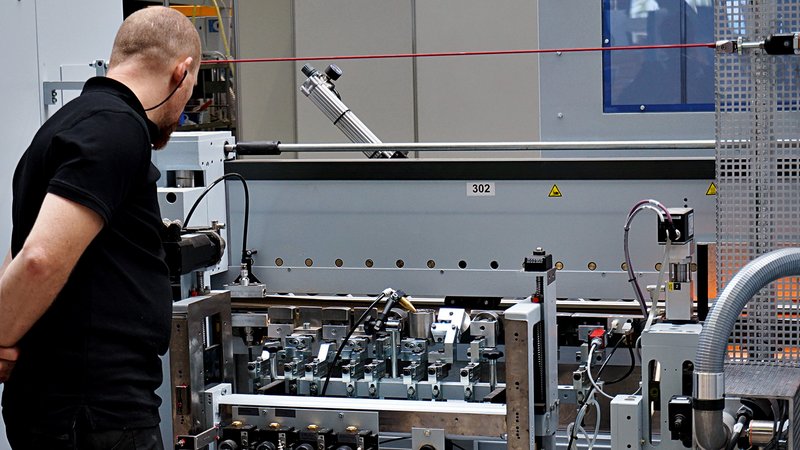 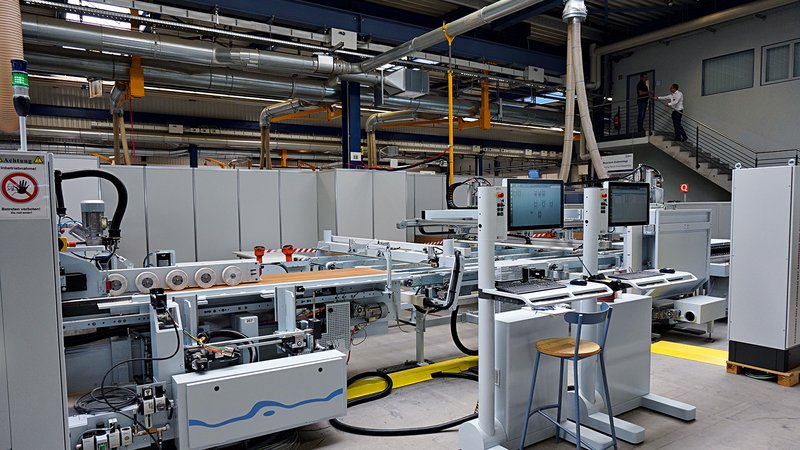 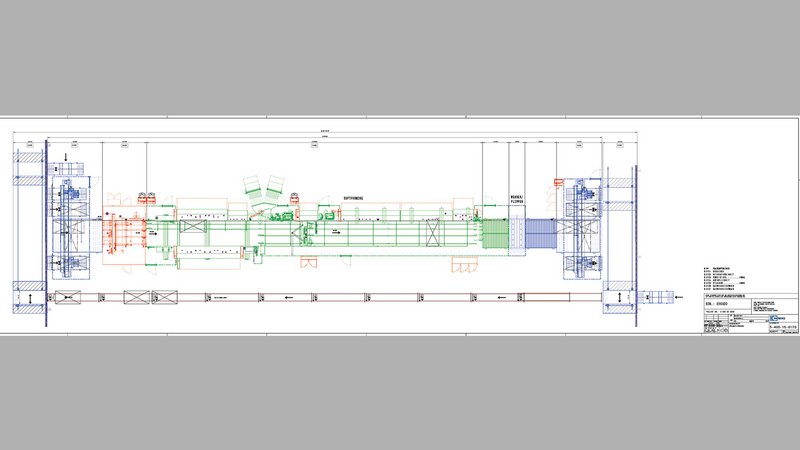 Picture of the plant installed in Poland. Picture: HOMAG Group

The front part of the rebate edge plant with the reference edge trimming unit and the KFL623 rebate edge machine at the front up to the edge magazine. Picture: Koch

Rear part of the rebate edge machine from the softforming units. Picture: Koch

Detailed view of the edge magazine with operator. Picture: Koch

The entire plant part supplied by HOMAG at the HOMAG-Treff in September 2016 during the demonstration, viewed from an elevated position. Picture: Koch

Manual feeding of the rebated edge line during the demonstration. Picture: Koch

An article from the german magazine "Türen-Magazin 2017".

Companies that cling to fixed machine and production concepts will face increasing difficulties in meeting market needs. Only manufacturers who are able to offer a sufficiently wide range of products along with flexible supply will be able to keep up with the market and carry out economic production. As Polish door manufacturer Erkado discovered for themselves. The company, which is based in the south east of the country, has, to date, manufactured sandwich doors for the entry-level price segment, which are covered all around with a decorative foil using a laminating plant. The change from one product to the next during production is very labor and time-intensive due to the technology involved. Every time a decor or door leaf width is changed, a heavy decor paper reel has to be swapped over. The quality that can be achieved and variety of the products are also strictly limited.
With this in mind, Erkado decided to switch production method to a combination of surface coating via short-cycle press and separate edge processing and invest in suitable systems.

After several months of planning and construction, the HOMAG Group, based in Schopfloch, who were carrying out the work, were able to demonstrate the functions of the ultra-modern rebate edge machining plant to several clients at its own premises. The plant was then installed at customer’s premises and connected to the accompanying handling and conveying technology. The door manufacturer had ordered these items from its regionally-based preferred suppliers for handling technology.
The process is as follows: the unmachined surface-coated door leaf parts are transported to the plant stack-by-stack by roller conveyors. The direct supply, carried out by an articulated robot, takes place via two feeding stations, which are flanked by a dummy panel station. The same configuration can also be found at the end of the plant, where the door leaves are stacked again after each throughfeed through the plant.
Once the barcode of the unmachined door leaf part has been automatically read, it is initially placed on the roller conveyor in such a way that it moves crosswise through the plant. The first processing step takes place via a reference edge trimming unit which trims off the rear longitudinal side narrow surface. To do so, the door leaf is fixed via a clamping bar and a trimming unit is moved along the longitudinal side of the door leaf, at right angles to its transport direction. The clean edge produced in this way serves as a defined contact surface for the feed cams of the two chain tracks which convey the door leaf through the rest of the plant.
In the actual rebate edge machine, which is a type KFL 623, the head-side and threshold-side narrow surfaces are processed simultaneously in throughfeed with the aid of two panel sizing and profiling units which are arranged in parallel. On the threshold side, rectangular trimming is carried out first. Directly after this, groove trimming can be carried out to accommodate a drop-down seal. The groove can be flexibly wide and trimmed up to a depth of 30 mm. (The groove ends are covered by the edge material which is applied to the longitudinal edges later.)
The processing on this narrow surface is completed by the re-printing of the barcode which was previously trimmed off. The head side of the door leaf is also trimmed first and then a rebate or another profile form is optionally trimmed on this narrow surface. Different profiles and profile combinations can be created on the plant. Inclined edges and ABS edges are also possible. All these rebate profiles can be created as single rebates or as double rebates. Apart from the ABS thick edging material, all profile variants can be set automatically. Rebate dimensions are possible according to DIN. It goes without saying that a groove from three-sided circumferential sealing profiles can also be trimmed in the rebated edges.

After profiling, which is partly performed via several machine throughfeeds, the edges are attached from the two magazines, which each contain 12 rolls. The adhesive, which can be EVA or PU, is applied to the edge material directly before the adhesion via application rollers.
A processing station, which has a decisive effect on the efficiency of this plant, is located directly after this. In this way, the door leaves are trimmed in parallel in throughfeed during the first longitudinal run (additional throughfeed after the crosswise run described here) by a reference trimming unit. (In doing so, an allowance of 1 mm is taken into account, which is trimmed off during the second longitudinal trip to obtain the final dimension.) The advantage of this trimming unit, which is positioned between the chain conveyors, is that it can be operated extremely quickly via servomotors according to the changing door leaf widths.
“This means there is no need to adjust the huge panel sizing and profiling unit at the front of the plant”, explains Rainer Schäfer, Technical Project Leader at HOMAG, in regard to a key advantage of the plant design. A gap of just 600 mm is needed to change from one door width to the next. In contrast, the panel sizing and profiling unit has a length of almost 10 m, which would need to be run completely empty for a width adjustment. In the case of profile adjustments on the left-hand side of the machine, resetting gaps of around 5-6 m are to be expected. For consistent, just-in-time production, which Erkado will implement in the future, this combination of various trimming units is optimal, as the company needs to change between different door widths very frequently. On the other hand, different door heights are rarer. For door height adjustment (up to 2.4 m), the right-hand side of the machine must be adjusted before the crosswise run.
Behind the reference trimming unit, the finely structured softforming line, which ensures a pressure zone which is optimally tailored to the profile in question, begins. In order to also create sloping profile forms, the edge magazine and the entire pressure zone can be swiveled by up to 25°. The upper finish processing units can be moved inwards accordingly. As part of the finish processing, which is also carried out in throughfeed, the rebates in the area where the transverse edge meets the longitudinal edge are automatically clipped off. A flush trimming unit and a finishing unit with scraper blade and buffing wheel ensure that the door leaf leaves the system ready for sale.

Ready for the next round

The door leaves are guided out of the plant via an outfeed roller conveyor, stacked and fed back to the infeed side of the plant as a stack via a roller conveyor. The profiling and edge application of both longitudinal sides takes place in further machine throughfeeds. Standard door leaves (flush and single rebate) are finished in three throughfeeds. The plant carries out seven cycles per minute. In the case of standard doors, this means it takes three minutes to complete seven doors.
In the case of double rebate door leaves, six throughfeeds are required to complete processing, three for the first rebate plus three for the second rebate. Just like the standard door leaves, the processing sequence is crosswise, longitudinal, longitudinal.
In principle, the door leaves to be processed are fed to the plant stack by stack.
As the barcode of each door leaf is re-read before each throughfeed, the door leaf in question is always uniquely identified and the system is told which further processing steps are to be carried out. Thus, even for partially processed door leaves, the order in which these are re-fed into the plant does not matter.

In addition to the direct coating of the narrow surfaces with edge material from the roll, the plant also offers the option to prepare door leaves for a postforming process through profile-defining relief trimming of CPL or HPL surface coatings. The actual postforming then takes place on a separate plant.
The outfeed roller table connected to the rebate edge machine is interrupted by a turner with which the door leaves can be turned from the front to the rear side. This is needed for when the door leaves are to be equipped with a counter rebate (as is the case with passive leaves). And the door leaves prepared for the postforming are also turned, as the subsequent process requires this. As postforming is only carried out on the two longitudinal sides, these doors pass through the rebate edge machine again for flush edge application on the head-side narrow surface to round off processing.
Due to the very low adjustment times for width and profile changes and thanks to the large edge magazine, just-in-time production can be optimally implemented. The rebate edge plant at Erkado enables highly flexible batch size 1 production with a consistently high level of processing quality. The plant is run in two-shift operation, at a standard production speed of 20 m/min.
Thus, depending on set-up times, the plant output is around 800 door leaves per shift. “For Erkado, the investment in this plant represents a huge step toward higher quality, efficiency and flexibility. It will dramatically reduce the lead time from the order to delivery”, says Schäfer with conviction.
Until the new rebate edge plant is fully up and running, Erkado will continue to use its laminating plant for production. However, the Polish door specialist wants to switch off the old plant by the end of this year at the latest and then switch completely to the HOMAG KLF 623.

Sandwich doors with frames made of MDF or soft wood-solid wood and HDF top layer (3 and 6 mm) will soon be processed on the plant. Paper honeycomb, tubular chipboard and solid chipboard are used as the middle layers. The surface coating is carried out with laminate film, laminate (CPL, HPL) or lacquer. Thin edges (0.3–0.4 mm) made from melamine and paper and ABS thick edging material (2 mm) are used as edging material. There are no plans to apply veneer to the surface or narrow surface. The door leaves to be processed can be up to 2,500 mm long, 1,250 mm wide and 65 mm thick, with a maximum weight of 80 kg. A processing allowance of 5 mm per throughfeed is to be provided for sizing and edge processing (longitudinal and crosswise).