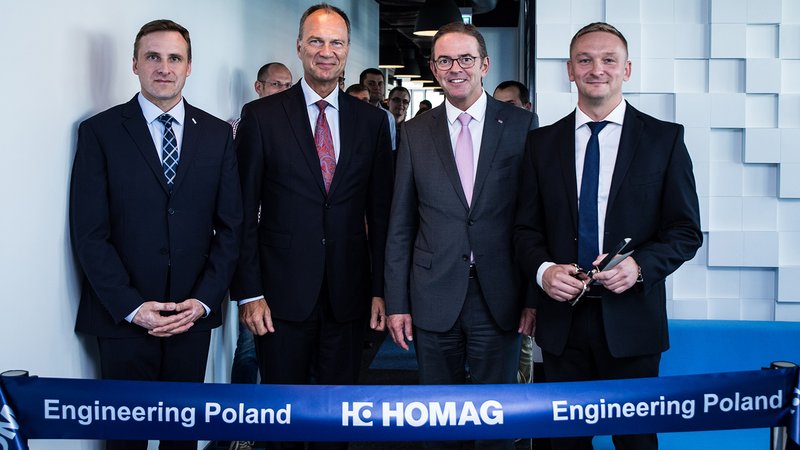 The world's leading supplier of integrated solutions for production in the woodworking industry and woodworking shops offers an innovative environment for engineers with the new engineering center. "Poznan will become an important part of our global engineering network. The focus of development will be on automation, software and digital solutions", emphasizes Pekka Paasivaara, CEO of the HOMAG Group. The new location is about 40 kilometers away from the HOMAG Group's second-largest plant in Środa Wielkopolska, where HOMAG employs approximately 800 people. Due to the new setup the engineers from Poznan can directly accompany the implementation of their projects.

Ralf Stürzel, Senior Vice President and Head of Human Resources at HOMAG Group: "In the course of our global growth, we have created a modern working environment here that is attractive for highly qualified employees. At the same time, we are actively addressing the shortage of skilled workers in the other markets, where it is becoming increasingly difficult to find the appropriate specialists."

The location of HOMAG Engineering Poland in Poznan was not only due to its proximity to the HOMAG plant at Środa. Poznan is home to many renowned scientific institutions, including 5 of Poland's 30 best universities. The city also offers a wide range of cultural activities.

This press release contains certain statements relating to the future. Futureoriented statements are all those statements that do not pertain to historical facts and events or expressions pertaining to the future such as "believes", "estimates", "assumes", "forecasts", "intend", "may", "will", "should" or similar expressions. Such future-oriented statements are subject to risks and uncertainty since they relate to future events and are based on current assumptions of the Company, which may not occur in the future or may not occur in the anticipated form. The Company points out that such future-oriented statements do not guarantee the future; actual results including the financial position and the profitability of the HOMAG Group as well as the development of economic and regulatory framework conditions may deviate significantly (and prove unfavorable) from what is expressly or implicitly assumed or described in these statements. Even if the actual results of the HOMAG Group including the financial position and profitability as well as the economic and regulatory framework conditions should coincide with the future-oriented statements in this press release, it cannot be guaranteed that the same will hold true in the future.