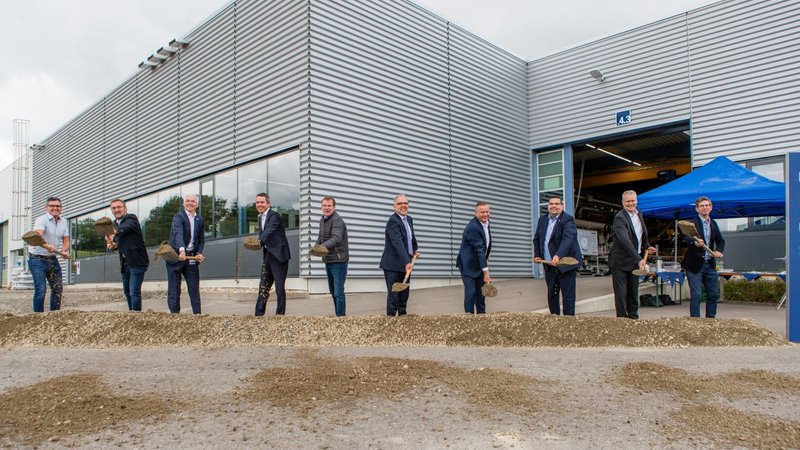 Schopfloch, July 8, 2021. With the groundbreaking ceremony in Schopfloch, the building work for an extension at the HOMAG Group officially began on July 7, 2021. The company is investing around 10 million euros in expanding and modernizing its production capacities. The new building is part of the largest investment program in the company’s history.

The extension, measuring approx. 6,700 sq m, is planned to be used for assembly and shipping. The HOMAG Group is thus combining the activities which have to date been decentrally managed at its Schopfloch plant. CFO Rainer Gausepohl explained in his speech that the plan is to close down some of the current assembly sites outside Schopfloch and to reduce external warehouse space. “We will thus save rent and transport costs. But the biggest benefit of the new building lies in the optimization of processes and an improved material flow within the plant.”

Aside from the HOMAG Group’s management team, the Freudenstadt district administrator, Dr. Klaus Michael Rückert, and Schopfloch’s mayor, Klaas Klaassen, were also keen to be part of the groundbreaking ceremony. Dr. Rückert highlighted the great significance for the region of companies such as HOMAG. “HOMAG operates around the world with numerous plants and locations for sales and service. We are pleased that the company’s current investment also shows a clear commitment to its roots here in Schopfloch.”

The new extension is due to be completed by early 2022 and is scheduled for gradual commissioning over the first six months of 2022. The building extension is the beginning of the largest investment program in the company’s history, set to support the HOMAG Group’s growth trajectory. As announced in April, the company wants to invest around € 100 million over the next three years, of which a total of € 60 to 80 million is earmarked for modernizing the Schopfloch headquarters. It will house a customer center, modern office buildings, a contemporary staff restaurant, and a logistics center. The construction of a new plant is also being planned for Poland.

This press release contains certain statements relating to the future. Future oriented statements are all those statements that do not pertain to historical facts and events or expressions pertaining to the future such as “believes”, “estimates”, “assumes”, “forecasts”, “intend”, “may”, “will”, “should” or similar expressions. Such future-oriented statements are subject to risks and uncertainty since they relate to future events and are based on current assumptions of the Company, which may not occur in the future or may not occur in the anticipated form. The Company points out that such future-oriented statements do not guarantee the future; actual results including the financial position and the profitability of the HOMAG Group as well as the development of economic and regulatory framework conditions may deviate significantly (and prove unfavorable) from what is expressly or implicitly assumed or described in these statements. Even if the actual results of the HOMAG Group including the financial position and profitability as well as the economic and regulatory framework conditions should coincide with the future-oriented statements in this press release, it cannot be guaranteed that the same will hold true in the future.