Since 2015, the construction industry in Hungary has been experiencing an enormous boost. The number of orders increased by around 300%. 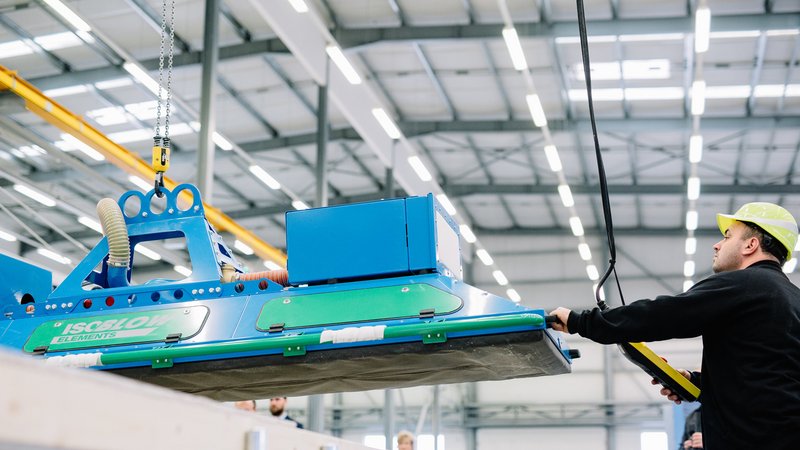 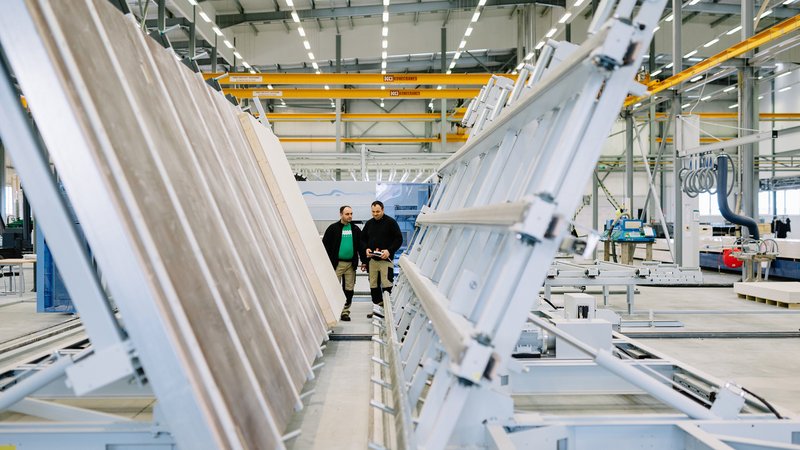 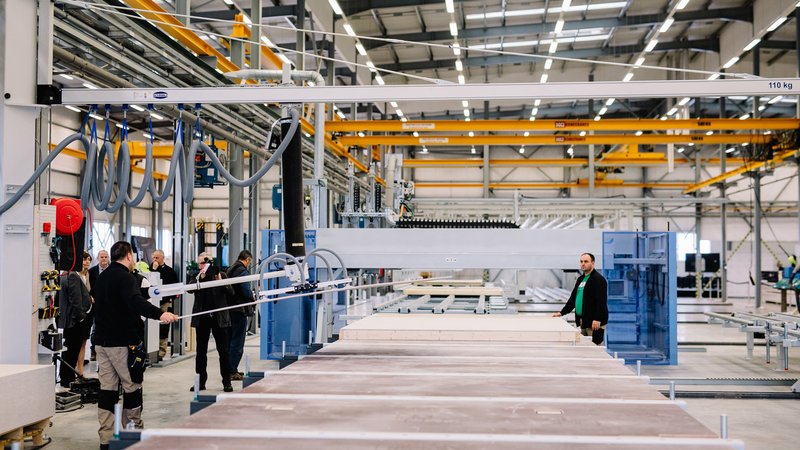 The insulation is inserted into the elements via a blow-in plate. Photo: Berger Hásak

"WEINMANN simply makes the best machines for timber house construction, which is why I didn't even contact other manufacturers."

A lack of specialists is an issue for Hungarian timber construction companies. One solution is greater productivity, as shown by our practical example of a production line for timber frame elements.

Since 2015, the construction industry in Hungary has been experiencing an enormous boost. According to Jozsef Karpati, chairperson of the Hungarian association of prefabricated housing, the number of orders increased by around 300% in the prefabricated construction industry alone. But the boom also presented problems. The financial crisis led to a huge shortage of skilled workers, as a lot of the workforce immigrated to other European countries during these years. This was also the same for timber construction companies, which is why today the prefabricated house industry is still unable to process some orders. A lot of companies are already at full capacity until the end of 2019. Specialist workers are not expected to return, as although wages in Hungary have risen, they are still below the prospective level of pay in Germany or Austria. This is pushing businesses in Hungary to seek out alternative solutions. Because the automation of production promises an increase in capacity with low personnel requirements, the current conditions in Hungary make this a sensible investment for the future. However, the country is still in the early stages. According to Karpati, the majority of houses are manufactured by small carpentry businesses: "In the level above that, there are maybe 12 or 13 companies that can produce prefabricated elements of up to 13 m in length. They work manually, so they can produce and erect around one house per week. There are only two timber construction companies in the country that have an automated production line. One has capacity for around 120 houses per year, the other 300."

The latter company is Berger Hazak in Polgar. As part of a comprehensive restructuring, in April 2017, the company-which until 2016 was still producing block houses from dried sawn wood-acquired an automated production line for wall elements and additional tables for producing ceiling elements from WEINMANN. Since then, the company in Polgar has been producing timber frame elements for detached houses, which are delivered to customers as close to turnkey as possible. Despite the implementation of the new form of construction, the company did not have any initial problems. From the very beginning, the quality standards here were very high, which is not unusual in Hungary - timber construction companies work with high-quality materials imported from Germany or Austria. During the financial crisis, the export of products to western countries was a life raft for Hungarian companies. Good quality management is a matter of course, as is a modern energy standard. U-values below 0.20 are the regulation in Hungary, and large companies also deliver external walls with a U-value of 0.16 or 0.12 W/(m²K). Berger Hazak also offers its customers various wall thicknesses, beginning with the budget-priced 240-mm variant.

Wood work is constantly gaining ground in Hungary. This is largely due to the prices, which are significantly lower than the country's predominant brick industry. Another reason is the short construction time, supplemented by the higher energy standard, which developers from younger generations particularly appreciate. In general, families building houses in Hungary place a lot of value on quality: "A lot of people are willing to spend a little more if that gives them the security of knowing that their house will be built to a high standard", explains Beregszaszi Pal, director of construction management in Polgar. For him, the increased precision of automated production lines was a deciding argument for modernizing production in his company: "Automated production enables better quality management, which is reflected not only in smooth processes at the construction site and shorter assembly times, but also in a qualitative improvement in our production. That's essential for us because we give a 30 year guarantee on our houses."

Another of the company's concerns was the increase in capacity. In 2018, Berger Hazak built 40 detached houses on the new system with 45 employees, thereby doubling the quantity achieved in 2017 - the year the system was introduced. The company expects further expansion in the coming years, as the acceptance of wood work is increasing in Hungary, and the company is already looking at new fields of business in the public and commercial area. Added to that is the technical advantage that Berger Hazak has over the competition, not only offering the company a unique selling feature but, according to its own information, additional cost advantages.

At present, Berger Hazak is running the new production line in a rented hall, in which WEINMANN developed a customized machine layout and function concept to fit in the small space. In five years, the company wants to earn enough money to be able to buy its own premises. The company runs production in Polgar on two lines, the larger of which is designed as a classic wall line. This line consists of four tables and an intermediate transport, where table 1 is used for both laying out the frame works and for sheathing. Alternatively, CLT solid wood elements up to 120 mm thick can be processed, should the company move into multistory wood work as part of its expansion.

After the sheathing has been cut and processed by a WALLTEQ M-340 multifunction bridge, the production line passes timber frame elements on to table 2 in a turning operation. There, employees install the electrics and insert the insulation into the elements via a blow-in plate. The insulation materials that can be used are mineral fibers, wood fibers, and cellulose - the latter of which is currently preferred by the Hungarians.

A longitudinal transport then moves the element to table 3, where it is sheathed before undergoing final processing by the multifunction bridge. On table 4, the elements are then erected and distributed to a wall slot system. The outermost track on the left-hand side of this wall slot system is intended for installing windows and doors. Berger Hazak delivers the elements to the construction site with a high level of prefabrication - after construction, subcontractors only need to add the plumbing and heating systems. Above all, the lack of space in the rented hall is noticeable in the wall slot system. Because there is not enough space for an additional loading trolley, the elements have to be removed from storage and sorted using the movable tilt table.

In a hall area next to the two production lines, the company produces trusses, which Berger Hazak currently uses to construct its roofs. Because the company in Polgar could alternatively process complex roof structures on the BEAMTEQ B-660 and run the ceiling elements over the existing production lines, this means that the company is highly flexible and equipped for all future requirements. It is a self-contained production concept designed for future development, despite the fact that this was not the main reason that Beregszaszi Pal decided on Weinmann: "They simply make the best machines for timber house construction, which is why I didn't even contact other manufacturers. The result proves that my decision was right. After an introductory phase, when we had difficulties with the new technology and had to be trained by specialists, the system now runs largely without any problems. Nevertheless, if we do need help, we can call Weinmann any time and they quickly present a solution to our problem. Excellent consulting that has been our constant companion since the machines were set up."

The first generation of employees is now well-versed in the new technology and can train additional specialists - an important first step for the company, as there are no specialists with the relevant training in Hungary. In Polgar, the company wants to continue to exhaust the existing timber construction capacities, and in doing so, Beregszaszi Pal has his eyes not only on the growing demand in Hungary, but also on exports to neighboring EU countries: "From a quality perspective, we are at the same level as companies there, which means that we see a realistic opportunity for expansion in these markets." In Hungary itself, Jozsef Karpati also foresees a continued constant growth in the future: "The construction sector could lose momentum again when the reduced sales tax rate and the aid for large families expire in 2020. But I'm optimistic about wood work. Although not explicitly promoted by the state, the industry should still increase its market share, as the zero energy standard for new construction is set for 2020 - and the best way to achieve high energy efficiency is with timber buildings."