Malaysia is not only considered as the emerging market, but also as the tenth largest furniture exporter worldwide. Therefore, the local producers have to face the same challenges as their competitors in Europe. 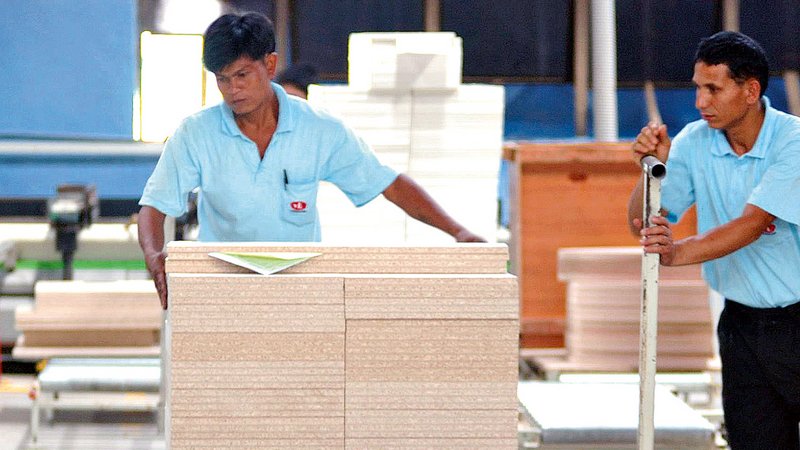 On the way to the customized production Versalink and Schuler defined together different development steps. Seen in the picture is the transport via Roller Conveyor.

The company Versalink from Kuala Lumpur manufactures office furniture in the upmarket price segment. Together with the experts from Schuler Consulting the company developed a concept which reconciles the mass production and the constantly increasing customized production. In the third part of the HK series “International furniture production“ the consultant Björn Henseler explains the details.

Just like a number of years ago in China, the demands related to customized furniture have also increased in Southeast Asia. However, the old organization of the mass production is still deeply rooted in the companies. Versalink manufacturers office furniture since 1991 – initially as a small carpenter’s workshop for the local Malaysian market and since 1993 the company exports on a large scale. In September 2014 the company has taken a major step with its listing at the stock exchange. As a consequence, Versalink came under pressure as they had to generate new orders. In addition to large-scale projects, customized furniture became more and more a must-have. The organizational structure of an individual production differs considerably from the mass production. More flexible machine technologies and a more extensive production scheduling required elaborate IT solutions as well as a rethinking and redesigning of all sectors.

Schuler Consulting GmbH, belonging to the Homag Group, is not only able to examine the products in detail but also to analyze the structures of production and organization. In this connection, topics such as production philosophy and control, quantitative analysis and compilation of batches or IT infrastructure are examined more in detail. The current project from Schuler Consulting, Versalink and Homag Asia started with this analysis which very soon showed the consultants the challenges. The analysis of the batch sizes clearly indicated that the mass production still represented the major part of the production volume. Nevertheless, customized orders are available which were very time-consuming in the production engineering which was still done manually. A high customer pressure with short-term delivery dates and the resulting rush orders destabilized the former mass production concept. The consequence: Again and again there were delays in delivery.

On the basis of this analysis it was possible to develop timely a first rough concept which allocates different products to several production lines.  The result of a subsequent project step was a detailed factory layout with different development stages for immediate changes, a three-year and a five-year plan. The achievement for Versalink is now a production which by using the existing machines is able to produce on four clearly defined production lines the required furniture of the different categories. The optimized material flow facilitates the transparency and the transport in the factory, the logistical expenses are reduced.

Whereas the relatively inflexible machines are still used in an optimized form for the mass production, the new flexible production line handles particularly the customized office solutions, the partition wall systems and the rush orders. This system is designed for batch sizes of 1 to 50 orders. Initially, these orders are completely produced on this production line and in a second expansion step – depending on the requirement of variant diversity – by the addition of an interim storage facility the frequently occurring standard components will be added to the order picking. The relevant required production and order picking documents are automatically generated after order creation by the Homag Group Software. The individual order is created graphically per “drag and drop“ with minimal customized processing or color selection.

In the past every individual part had to be manually redrawn. In mass production the ratio of production engineering time to batch size is still in order. However, in case of a batch size consisting of one order only this operating expense soon becomes a bottleneck in the business processes. In the machine selection the Homag machines were allocated to the customized production in order to enable a technical realization of a flexible production method. Both, data preparation by means of various post processors and the networking of the machines with one another constitutes a sophisticated and tried system. Thus the IT adaptation expenses are kept on a minimal level.

Flexible drilling machines will be additionally acquired after the rebuilding of the factory. This step of expansion shall support the company with regard to the increasing production figures in the customized production. After the planning phase Schuler Consulting will assist Versalink in the implementation of the layout.

Here, the focus will mostly be on the coordination of the machine displacements in order to have gradually implemented the new layout. At the same time, the focus will be on the maintenance of the production figures. To this end, the experts from Schuler Consulting have developed a production concept which optimizes subareas of the production ensuring that during the relocation the existing capacity will remain constant. Additional fields of activity will be optimized synchronously during this phase which will last about six months.

This concerns capacities in the production engineering, the order dispatching to the correct production lines, the optimization of the production preparation and the related tasks of IT systems such as CAD/CAM but also ERP and MES systems. The cut optimization and the first step towards an automated order preparation reduce already at this stage the amount of work in the office and in the production. In order to have all these tasks handled reliably, the team – consisting of employees from Versalink and Schuler Consulting – are in close contact with all suppliers. This may concern the machine technology, the installation plants such as dust extraction, compressed air or electricity but also the software sector. In this connection a close coordination with regard to ERP and CAD/CAM systems is required in order to cope with the present tasks as effectively as possible but, above all, to have the company prepared for the future in a sustainable manner.

The involved responsible parties of Schuler Consulting are very confident that the work in Southeast Asia will be successful. Altogether, increased value is attached to the topic implementation of the planning. In this connection, together with the manufacturers, the consultants repeatedly manage to overcome the well-known tunnel vision, to solve problems and to open up new perspectives.