Wood panel processors and furniture manufacturers are looking towards the use of smart technology. 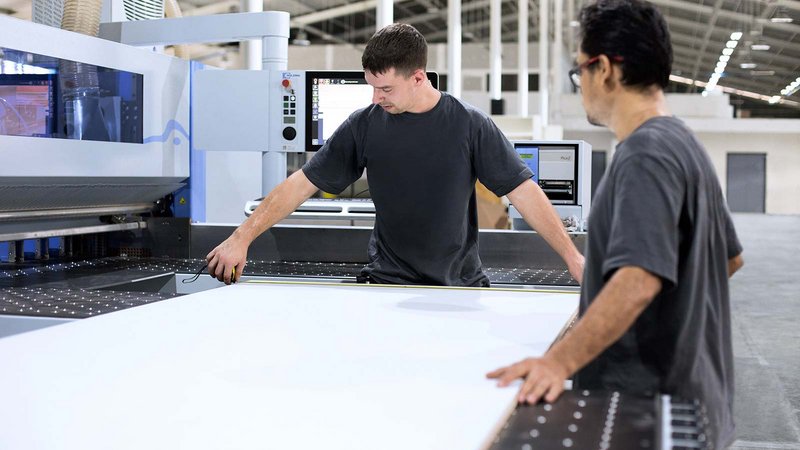 HOMAG’s panel saw was definitely up for the job

As global manufacturers shift beyond merely automation, wood panel processors and furniture manufacturers are looking towards the use of smart technology to optimise production lines and further streamline processes. HOMAG, a world leader in providing integrated solutions for the woodworking sector, endeavours to enable their partners to achieve Industry 4.0 and get ahead of the game.

Here, we explore how a leading Indonesian furniture manufacturer partnered with HOMAG to embrace smart automation in their factory right from the get go. In a part of the world where manual woodworking methods are still considered the norm, what was the motivation behind the change and what challenges came along with this unusual endeavour? Panels & Furniture Asia had the opportunity to speak with Tim Spanjaart, Managing Director of Furnindo, and Chief Operating Officer of AVIP, to find out more.

Furnindo Utama Asia is one of Indonesia’s leading panel processing furniture manufacturers, and is the daughter company of AVIP – a professional design and build interior architecture firm that has been providing the Indonesian market with workspace fit-out solutions for the past 26 years. Established at the beginning of 2016 in Tangerang, Java, Furnindo’s factory currently spans around 5,500 square meters and employs a strength of about 40 staff members.

Before the establishment of Furnindo, AVIP was heavily reliant on the outsourcing of furniture production as their 500-sq-m workshop in Indonesia was largely unable to produce sufficient yield. Despite an attempt to shift from manual practices by importing second-hand digitally controlled machinery from the Netherlands, the space that they had was still insufficient for AVIP’s rapid growth. Looking to reduce the amount spent on outsourcing, as well as resolve issues with product quality and timely delivery, Tim, then Production Manager at AVIP, and his management team saw the eminent need for an upgrade.

That’s how Furnindo was born. In 2015, the decision was made to invest in their own factory and the goal was to produce customised furniture & interiors with as much automation as possible. Despite the higher investment needed to kick-start a fully automatic panel processing line, Tim and his team wanted to move away from manual production right from the start to minimise mistakes and errors.

“It was an investment to make, but weighing the advantages and disadvantages made us come to the conclusion that it would be good to do this right from the beginning,” Tim said. “If we had to implement this while we were already running the production process, it could create a lot of unforeseen issues and slow you down when you have deadlines to meet.”

His team then contacted a local representative of HOMAG and purchased a panel dividing saw (SAWTEQ B-300) and CNC processing centre with edging capabilities (CENTATEQ P-310 and Edge Bander NKR782). Tim shared that his late father led the decision to work with HOMAG.

“At that time (in 2015), my father was still around – he had been a furniture maker for a very long time. He had his own factory in the Netherlands that was completely fit out with HOMAG machinery, so he knew what he was looking for,” Tim recalled.

The machines arrived in December 2015 and were fully operational in January 2016. Right from the start, Tim was involved in the guiding and setting up of the factory.

As meeting AVIP’s demands was a major goal that Furnindo was set up to fulfil, it was important that the machinery purchased were able to significantly increase production capacity. According to Tim, HOMAG’s panel saw was definitely up for the job. In fact, after just over a year, to better handle output from the panel saw, Furnindo purchased a second CNC machine (CENTATEQ P-100)!

Since Furnindo’s output is project based and made-to-order, the production of smaller batches is not uncommon – even down to one or two units. Here, their use of HOMAG’s wood CAD|CAM software (now known as HOMAG iX) drives automation and optimises production capacity even for small orders. Using 3D rendering and automatic CNC programming, this software enables manufacturers to streamline processes and improve their professional presentation capabilities by optimising the design stage into the manufacturing process. Prior to using this software, everything was being done manually. Drawings were made in AutoCAD and individual panel dimensions had to be individually extracted.

“The software rapidly improved the way we draw and product the furniture,” Tim commented. “Overall, it’s much faster to design and have our designs ready for production because manual inputs are not required. Once the designs are ready, just a push of a button is needed for them to be translated into individual optimised cutting programmes.”

The move from manual to digital production is a major one, and definitely did not come without its challenges. From the beginning, HOMAG shared with the team that the CNC processing centre was rather complicated especially for those who have no prior experience with CNC machines, and the complexities were doublefold because of the machine’s edging capabilities. However, HOMAG’s support in the form of regular visits from engineers and trainers helped the team to successfully manage the transition and implementation.

Implementation of the woodCAD|CAM software presented a challenge at the beginning. Furnindo’s draftsmen, being native Indonesians, were not fluent in English and besides learning the ropes of a new software, they had to learn to break down the language barrier. After a week-long training session with a German trainer, the team took a month or two for experimentation and testing. Another week of training with HOMAG was then scheduled to evaluate the progress and iron out teething issues. It helped that the training sessions were held prior to delivery of the machines – the team was able to start operating them with the software immediately upon arrival.

After getting past the initial hurdles, the software and machinery have definitely helped Furnindo in leaps and bounds. As the production demands for AVIP can now be met, the current challenge is to keep the factory running at full capacity – Furnindo is now working on creating relationships with other vendors, local and beyond, to whom they might be able to supply in the near future.

Given that Batch Size 1 production (or even small-batch production) is still catching on in the South East Asia region, Furnindo’s foray into automation is a leap in the right direction given ever-increasing demands for customised projects and products.

Industry leaders such as HOMAG aim to be at the forefront of helping manufacturers transit into this brave new world, with relevant support, education and training.

When asked if the use of HOMAG’s products have been well implemented within Furnindo, Tim seemed pleased with the outcome of the transition from manual to fully automated production. “It definitely helped us reach the goals that we aimed to change,” he concluded.

Malaysia is not only considered as the emerging market, but also as the tenth largest furniture exporter…