Since 2013, Lohnabbund Schuth has been offering construction component manufacturing, in addition to beam processing services. In 2021, the company automated its production. 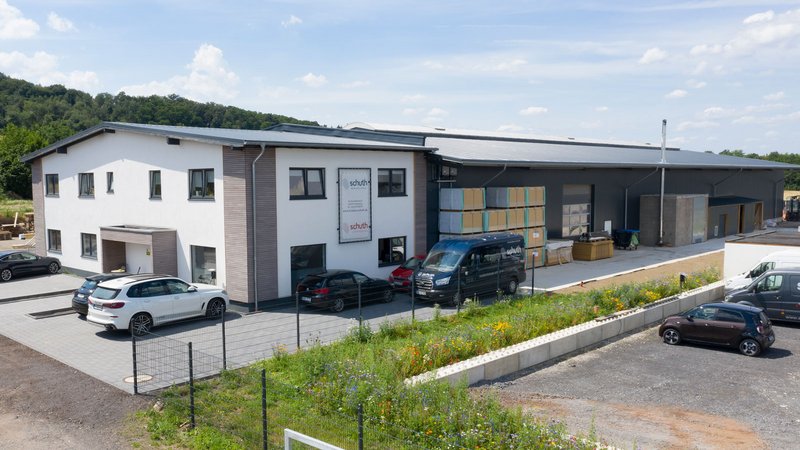 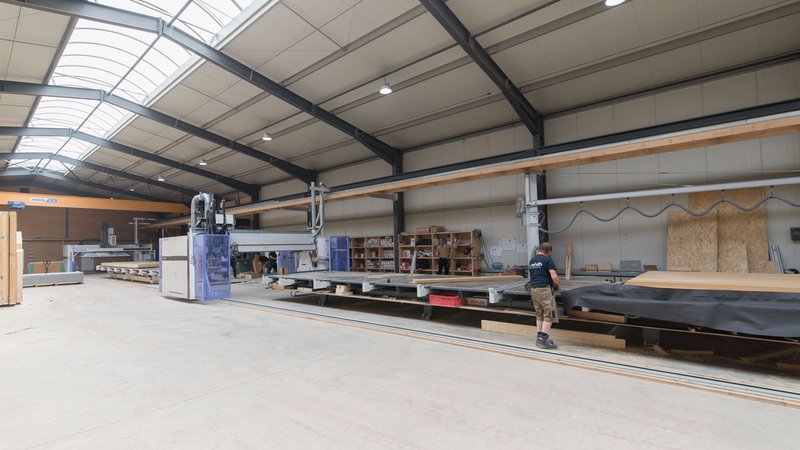 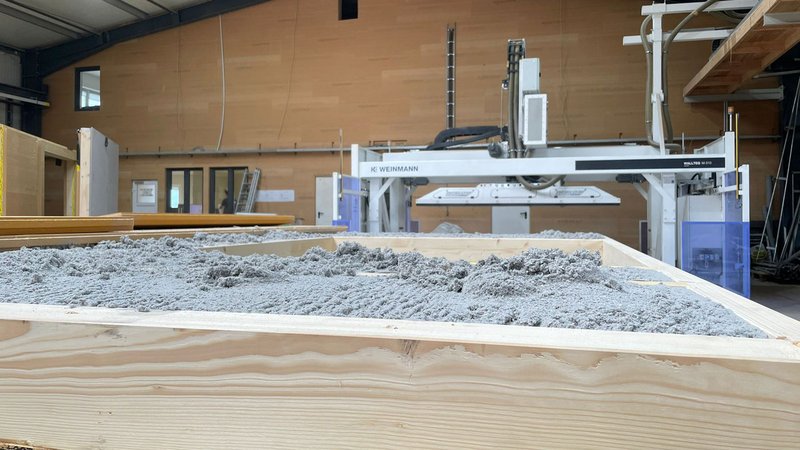 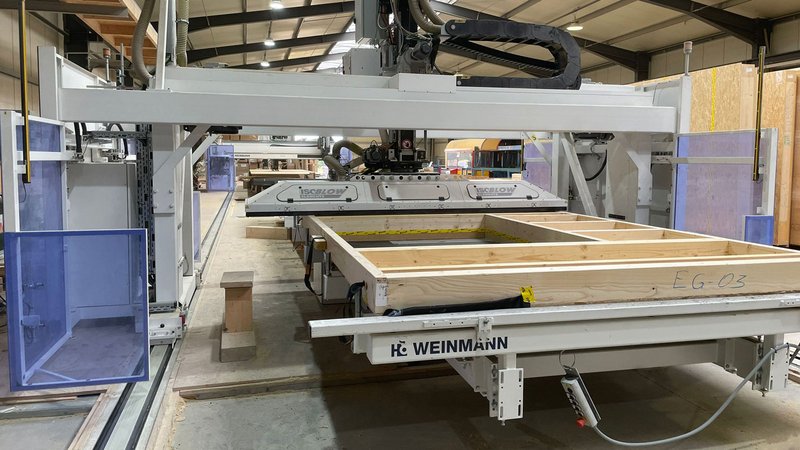 In the new production facility in Ochtendung - spanning over 3000 square meters - the company produces precisely dimensioned blanks for entire wooden houses, roof trusses and much more.

The WEINMANN production line consists of a WALLTEQ M-380 and a WALLTEQ M-300 insuFill as well as two processing tables.

The CNC-controlled multifunction bridge positions the blow-in plate exactly above the respective compartment and is highly efficient.

Thanks to the rotating blow-in plate, the WALLTEQ M-300 insuFill not only automatically insulates wall elements, but also roof and ceiling elements.

"Today, precision and high quality are vital if you want to be one of the top players."

One of the trends in timber construction is that construction supply centers are moving toward producing additional building elements. These centers do not just supply elements to small companies without their own production facilities; they also supply medium-sized companies that have their own production facilities and purchase elements to manage peaks in demand or handle special orders. This trend is accompanied by a steady increase in the degree of prefabrication, which is why many construction supply centers focus in particular on offering a wide range of processing. This enables their customers to assemble the ordered elements on the construction site quickly and with just a few employees. The next step at Lohnabbund Schuth, located in Ochtendung in the Rhineland-Palatinate region, is to enter the field of house assembly. This is not surprising, since the company whose history reads like a kaleidoscope of the development of timber construction over the last 40 years has already built wooden houses in the past.

The company, which was then based in Mülheim-Kärlich, was born out of a classic carpentry business in the 1980s and started building detached houses. The first kindergarten followed in the early 1990s, and timber house construction began to establish itself as a solid business area. From 1999 onwards, the construction of holiday homes followed as a separate product line, and the carpentry business invested in a second-hand production plant. This came to an end with the financial crisis of 2008. Dieter Schuth and his wife Silke decided to reduce their business activities to beam processing work due to the increasing pressure on the market. The company shrank to a two-person business: "My wife stood at the carpentry machine; I was responsible for the material supply and transport and I did the work preparation in the evening," recalls Dieter Schuth. The bulk of the beam processing went to a purchasing cooperative and a large center for building materials that the company worked with continuously. As the demand for wooden frame elements increased, in this phase the company gradually started to produce elements. Between 2013 and 2015, six additional employees joined the company. The hall was once again equipped with a production table on which wall and ceiling elements were produced manually. In 2018, the company moved to new premises in Ochtendung, which offered better transport connections and with 10000 m2 of space, better growth opportunities. Dieter Schuth and his daughter Cheyenne who will later continue to run the company had already envisaged an automated element production facility for the new, larger hall. "It had become clear that we wanted to absorb a larger proportion of the rapidly growing timber construction sales," explains Dieter Schuth, explaining the considerations at the time. "We wanted to make a difference on the market and, for example, also tap into building classes 4 and 5."

It was clear to the master carpenter that this could only be achieved with automated production: "I simply cannot achieve the same precision manually that an automated system can offer. But today, precision and high quality are vital if you want to be one of the top players. What's more, even before moving to the new hall, we had a demand that by far exceeded our capacities. 99% of this demand came from carpentry businesses and hardly any from woodworking shops, and business was increasingly moving toward the supply of elements. The trend was also toward insulated and closed elements with an increasing degree of prefabrication. Manual production could no longer meet this demand. Even if I had hired more people who didn't exist we would very soon have reached our limits. Given the staffing problems, it is also advisable to move as many process steps as possible from the table to the computer. By automating production, elements also run through the hall with little manpower without any problems caused by misunderstandings, queries or discussions. As the elements become increasingly complex due to encapsulation etc., this is a major advantage." Automation was also about improving ergonomics: "For example, I have an employee who is very close to 60," explains Dieter Schuth. "I really want to keep him in the company because he has a lot of experience and fully supports us. But I can't have him lugging around OSB panels all day and sliding around on his knees stapling. Instead, with the lifting equipment and multifunction bridge, I can offer him an attractive place to work so that he's not looking for a job that is less physically demanding."

Ahead of target times

These are all good reasons for automation, which is why father and daughter were looking for a suitable machine manufacturer. They quickly decided on Weinmann Holzbausystemtechnik: "One of the things in favor of the machine manufacturer in Lonsingen is that it develops the control programs for its machines in-house," explains Dieter Schuth. "This means that the software and machine technology interact, and future updates are secured in the long term a crucial factor for us." Another key aspect for the managing director of Lohnabbund Schuth was that "in Lonsingen, there are tailor-made solutions for every size of company. Elsewhere, we sometimes had the feeling that we were offered solutions tailored to industrial companies or integrated processing options for timber construction engineering, which we did not need but would have to pay for." Dieter Schuth was also not persuaded by a solution with separate panel processing: "For me, the bridge does not do enough considering our quantity. And if I process the panels for a large project separately, I have two software-controlled systems and I have to sort the panels after processing and position them in the component with absolute precision. In my opinion, this creates too many potential sources of error. I found Weinmann's solution, where the bridge can do everything, much more interesting." Dieter and Cheyenne Schuth therefore ordered two processing tables and a WALLTEQ M-380 multifunction bridge in Lonsingen, where they were also supported in applying for grants for the new plant. A WALLTEQ insuFill insulation bridge with rotating blow-in plate was added so that on the new line, the company could produce not only walls, but also roof and ceiling elements. The plant was delivered in 2021 and put into operation quickly and without interrupting production. Since then, the company's sales have more than doubled, mainly due to the faster production cycle times: "Even during the first projects, we were well ahead of our target times. For example, when constructing a new hotel, we had an element output of almost 100 m2 with only two employees working in production. Today, automation also enables us to quickly respond to peaks in demand. This is important in our profession, since large orders with a tight schedule are part of the job description, so to speak. If needed, we can drastically increase our capacities again with two- or three-shift operation. In beam processing, we are already in two-shift operation, and we'll soon be doing this in element production as well there's just the question of the additional staff needed." In Ochtendung, re-entry into the field of assembly is also imminent. "Even if the staffing issue poses a challenge, we want to get there again to ensure the quality of our products right through to the assembly stage." In Ochtendung, a lot of effort is being put into this, for example, using the Stexon successor HCW (Hilti Coupler Wood) for precise wall positioning "much more precise than leveling thresholds, but hardly possible without CNC." The strong trend toward increased prefabrication can also be better served in Ochtendung thanks to CNC production: "Just look at the issue of installation level, which is being asked for by increasing numbers of customers. We manufacture the walls on request, including empty pipes and hollow sockets, which we integrate into an AGEPAN panel. It's not only that the necessary openings can be trimmed by machine with little effort we also have to notch the panel exactly at each abutting inner wall. We have tried this manually, and believe me, it never fits. In contrast, it's never a problem with the machine."

Element production has secured new customers and orders for Lohnabbund Schuth, as well as offering significantly increased added value compared to beam processing alone: "The latter is and remains a good mainstay for us, but element production is much more lucrative. We would never have managed the investments in the hall and technology with just beam processing." Dieter Schuth therefore sees element production as the main pillar of his business in the future as well. Due to general conditions, he is currently experiencing a sideways move from detached house construction to large-scale projects. "In principle, this is not a problem for us, because we are also ideally positioned for this area in terms of technology. Large projects even bring us additional synergies: during work preparation, we can standardize even more and copy entire floors; in production, we can run the standard components through quickly and smoothly because there are no plans to be read at the table. We therefore save costs and can increase our capacity once again." Dieter Schuth is planning a second hall on the new premises in the coming years. This is where the carpentry machine will be housed in the future, while a line for the installation of windows will be integrated in the existing hall. This is how they aim to keep up with the trend toward a higher degree of prefabrication in Ochtendung. And all this in proven quality, of course: "It is the root of our success, because the bulk of our orders are thanks to word of mouth from satisfied customers."

Lohnabbund GmbH, based in Ochtendung, has evolved over time from a classic carpentry business. Starting with a focus on beam processing, the company is now an established partner of woodworking shops across Germany and is a valued supplier of beam processing and prefabricated wooden frame elements in the industry.

Fit for the new standard

Modernization of the production line at SOCOPA in France.