Perfect fit for the size of the company

After a continual increase in the number of orders in recent years, the carpentry company LB Holzbau in Borken decided to invest in automated production. 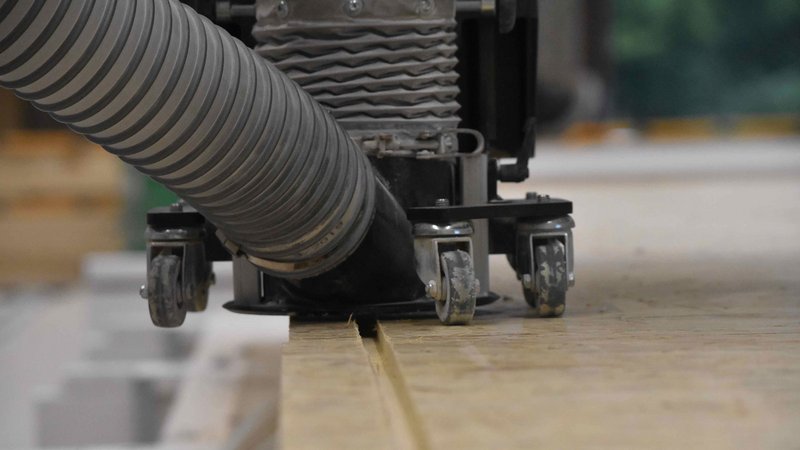 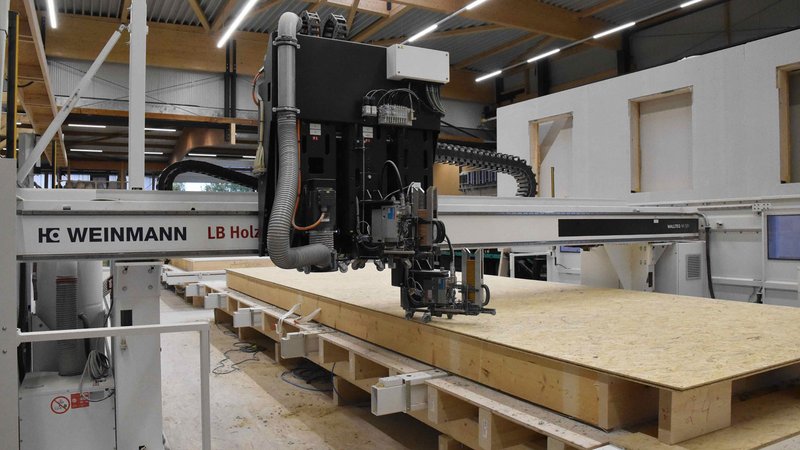 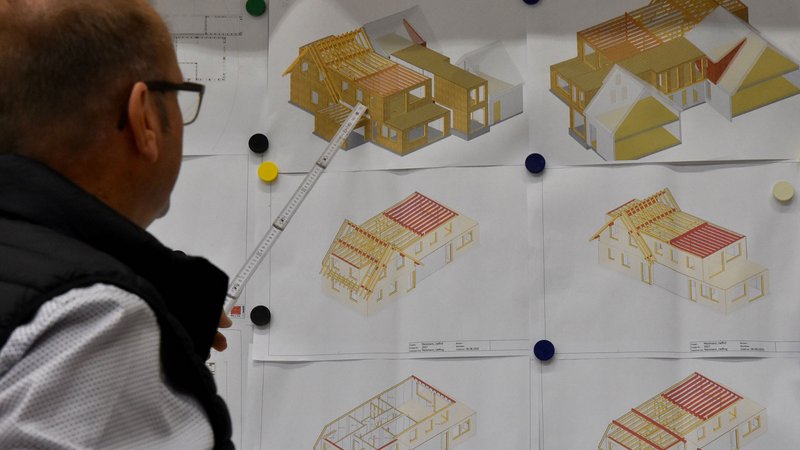 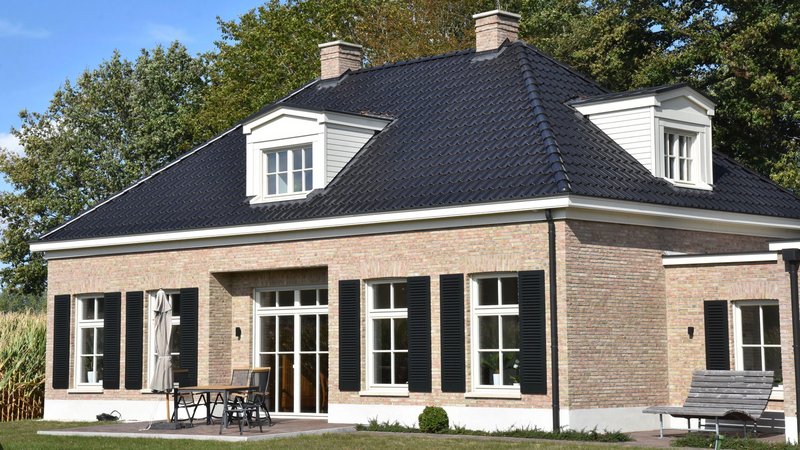 LB Holzbau modernized its production with the new technology.

The multifunction bridge with the integrated routing unit for processings with a high precision.

Multifunction bridge and self assembly table - the ideal combination for LB Holzbau.

The data are transferred directly from the CAD system to the machine.

"The production line delivers turbocharged precision. Not only does that impress our customers, it also saves us time for reworking on the construction site.."

An article from the magazine Holzbau quadriga, issue 5/2020. You can find more information here.

The fact that even small carpentry businesses are automating their production is not a new development. However, this development is being accelerated by new production systems that have been specially optimized for this market segment. For LB Holzbau GmbH in Borken too, this was an important reason to invest in automated production.

Since the company was founded in 2008, managing director Ludwig Böggering has achieved a respectable increase with LB Holzbau GmbH. This can be measured above all by the volume of orders that the company – which currently employs 22 people – is receiving, the orders being almost exclusively in the field of construction of private residential property: "Every three weeks we assemble a house, and every month there's an extension, an extra story to be added somewhere or a renovation of an old building." Each project is usually planned individually; two architects cooperate to fulfill even high-end design requirements. The company advertises primarily on Facebook and Instagram, with an occasional newspaper advertisement. However, the lion's share of the company's orders comes through word of mouth from satisfied customers. It is not with low prices that the company convinces these customers, but with quality and service: "Anyone we build for knows that we are not the cheapest in terms of price but that the services we provide are worth their money," explains Ludwig Böggering. In light of this, an above-average precision achieved through the use of modern technology becomes an important sales argument. "For additional stories, extensions and modifications, we go to the construction site with a tachymeter to measure the existing building. This special know-how gives us a unique selling point in the region: when we give a quote in this area, we generally get the order."

LB Holzbau has seen continual growth in recent years: the number of employees has continued to rise regularly and in 2019/20, a new production hall and a new office building were built on the company's site. It gradually became apparent that in Borken, manual production was reaching its capacity limit. The options were to either stand still or to invest. The fact that the master carpenter decided to do the latter was also down to the fact that the company succession was already secure: "My son, who is currently training to be a master craftsman in Kassel, will take over my company in the long term. Our investment in automated production was thus an investment in his future." The market launch of the WALLTEQ M-120 multifunction bridge played an important role in this decision. This multifunction bridge, specially tailored to the needs of small timber construction companies, "was a perfect fit for the size of our company," remembers Ludwig Böggering. "The investment was also affordable, especially as the multifunction bridge can be combined with flat-pack tables. We used this option." The insulation is inserted into the cavities of the elements with a manual Isocell blow-in plate. The company has been outsourcing beam processing for years: "We can get this done to such a high quality and at such a good price that it's not worth investing in a beam processing machine ourselves."

Equipped with two clamping devices and one routing unit, the WALLTEQ M-120 ensures that the workflow in the new hall is quick, something that is much needed in light of the increased quantities. "We could also increase production to one house every two weeks but it will be one or two years before we can do that," explains Ludwig Böggering: "We need to find the right people for the assembly first, and of course, the additional houses would need to be sold." The new technology serves Ludwig Böggering as a sales argument: customers are guided through the production hall and are regularly very impressed by the automated production. This is even more true as the high production precision of the WALLTEQ M-120 fits excellently with the company's philosophy of "quality and service." According to Ludwig Böggering, "compared with manual production, the WALLTEQ M-120 has provided a quantum leap in the quality of components: the production line delivers turbocharged precision. Not only does that impress our customers, it also saves us time for reworking on the construction site." The increased level of prefabrication also saves time: the self-build tables have been equipped with roof and ceiling clamps; the multifunction bridge also processes these types of elements. Therefore, a quick workflow in the hall and fast assembly on the construction site have also set the pace for these trades as well. The time-consuming construction of conventional ceilings and roof structures is a thing of the past. Ludwig Böggering is certain that production is much more efficient since the changeover as a result of these changes and, all things considered, the company is therefore earning more money: "We are still working on the calculations, but a profit is already clearly foreseeable."

The new production system was delivered in March 2020 – punctually after the completion of the new production hall. There was then a startup phase, which can be seen as a smooth change from manual to automated production. "We had to do it that way, we couldn't allow ourselves a production standstill. That's why, after very good instruction from a WEINMANN technician, we continued production from a standing position. So far, that has worked for us without any problems." Important prerequisite: the machine-compatible details were created in the CAD software in advance and subjected to a test at WEINMANN and Cadwork. A young foreman in the company who specializes in work preparation was responsible for that. The new technology was also accepted straight away by the other employees – thanks to an improved market position, the employees' workplaces are secure and, thanks to the modernization, have become significantly more ergonomic. "Previously, when clamping, trimming or drilling, the employees had to crawl around on the elements," says Ludwig Böggering, looking back on the days of manual production.

The fact that the company has already secured two large orders for the winter confirms that the decision to invest was correct. "We wouldn't have been able to produce the required quantity manually and even with the multifunction bridge, we may have to run two shifts," estimates Ludwig Böggering. What is also becoming clear here is that thanks to customers' increasing awareness of the environment and health issues, the trend for timber construction is rising sharply. If it continues that way, as Böggering expects it to do for the next few years, LB Holzbau has room to grow. "We're currently working with three employees in production but a total of five would be possible. With this level of staff, we can increase the quantity to one house per week — producing 52 houses per year plus around 12 house renovations. From that perspective, the company is in the best shape possible for my son."

The carpentry LB Holzbau, founded in Borken in 2008, has made a respectable rise. In the last few years the carpentry business has been growing continuously.
On the company premises with a new production hall and a new office building, 22 employees are currently employed.

The Gätke carpentry firm in Osten-Isensee, Germany, has taken the step to ensure that the business is set up…

Quality can be planned