Paradigm shift in furniture manufacturing in the Middle Kingdom 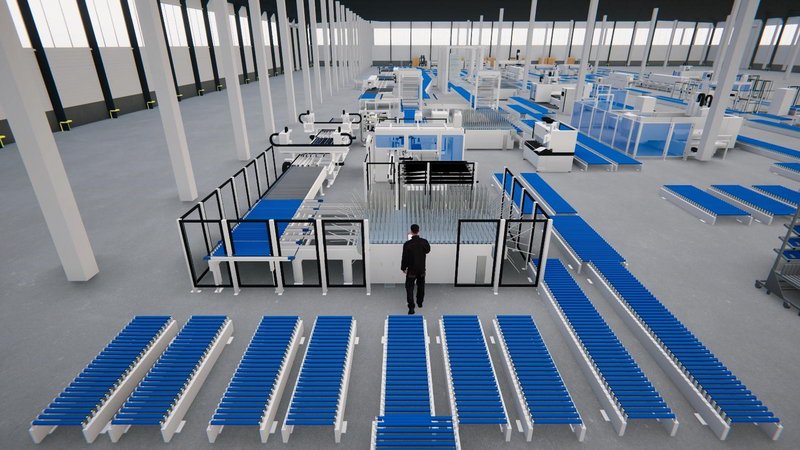 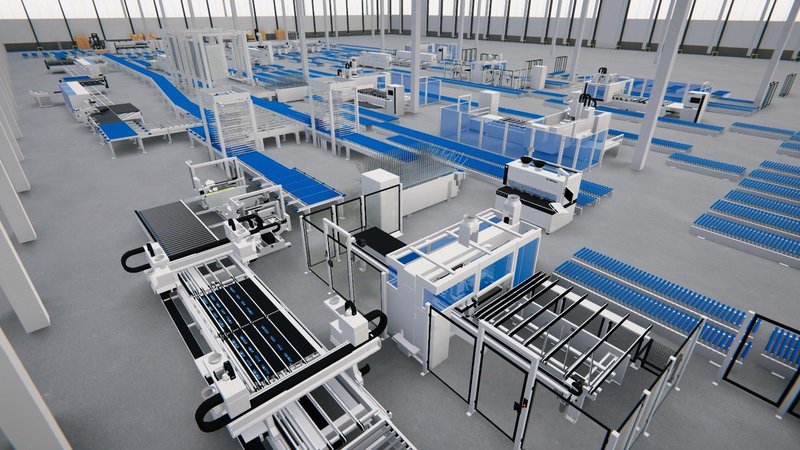 The 3D visualisation shows the planned factory of a Chinese office furniture manufacturer. The manufacturer wants to relocate its production and produce in a more automated and better way in the future.

This is what the new plant of the Chinese office furniture manufacturer, which is scheduled to go into operation in 2022, will look like. The 3D visualisation shows the planned highly automated and flexible parts production, in which edging, buffering and drilling as well as milling have been interlinked.

An article from Lorenz Mannl (SCHULER Consulting) for the German HK Magazin, no. 03-2021. More about the HK magazine

The Chinese government has a clear vision for its People's Republic: China is to develop from the "workbench to the world" into a highly innovative industrial nation by 2025. China wants to leave the image of inferior products behind in a few years and is counting on the digitalisation and automation of the entire manufacturing sector. Lorenz Mannl, consultant in Asia at Schuler Consulting, reports on a furniture manufacturer in China that has taken this leap.

The reasons for the great interest in digitalisation and automation technologies, especially in the Chinese market, are manifold: besides sharply rising labour costs of eight to ten percent per year, the complexity of the market is also increasing. The result is increased demand on flexibility within manufacturing. In addition, many entrepreneurs are motivated by the government's "Made in China 2025" campaign, which was adopted in 2015. This initiative pursues the transformation of China into a highly innovative industrial nation. The manufacturing sector is to develop step by step from the so-called "workbench of the world" into a highly innovative, digitalised sector. The goal: manufacturing with state-of-the-art technology and to be internationally competitive.

High demands and a clear goal: Made in China 2025

Based on this vision of the future, ten key industries have been identified in which digitalisation is to be increased immensely by 2025. An accompanying plan of measures supports domestic manufacturers in their efforts to modernise their production facilities. Around 300 billion US dollars are available for this purpose. Currently, the focus is on the expansion of the digital infrastructure, such as the continuous expansion of the 5G network. In addition, investments in automation and digitalisation projects in particular are subsidised.

In order to support our customers in realising this ambitious vision, it is imperative, even in former low-wage countries such as the People's Republic of China, and common practice in our consulting projects, to view furniture manufacturing as a complete system. Only through the right interaction of suitable software systems in the vertical process and a consistently suitable operational and manufacturing organisation is it possible to supply the highly flexible and automated machines and systems with what is today probably the most important resource at the time of production start-up: the complete data.

One of the impulses for this development was the idea of Industry 4.0 from the German-speaking world. While in China the government decisively determines where the journey should go and strongly subsidises this, in Germany, for example, the companies themselves are driving forward the digitalisation and automation of the industry. The Made in China 2025 initiative (MIC 2025 for short) is only one stage on China's way to becoming a global production and technology leader: China's goal is to catch up with the world market leaders by 2035. By the 100th anniversary of the People's Republic in 2049, the goal of world market leadership aims to have been achieved.

While in Germany the development towards "Industry 4.0" has already been progressing more or less rapidly for several years, a large number of companies in China are still at the beginning of the necessary transformation. In Germany, a sustainable approach is being pursued: through the development of common standards and norms, the subsequent adaptation on a broad scale should take place faster and more smoothly.

In China, a frequently used phrase proves to be an advantage in digitisation: "Cha bu duo", which can be translated into English as "good enough". One often starts with a prototype, which is later modified and optimized until it fulfils the desired purpose. A very similar methodology is called "SCRUM" in the field of software development and "rapid prototyping" in the field of physical product development. The aim is to obtain a functioning product that meets the minimum requirements in a short time. Further detailing and optimization is then carried out directly on the prototype, bringing ideas into practice more quickly. In China, this often results in isolated solutions, which are, however, quite practicable and function excellently.

In day-to-day practice, despite strong differences in mentality, we find that regardless of whether it is in the People's Republic of China, in Germany or anywhere else in the world, the same challenges often exist when it comes to the topics of digitalization and automation in furniture manufacturing. The following example of a customer project of a Chinese company shows why this is so.

A furniture manufacturer in eastern China is planning a factory relocation to the neighbouring province. The customer's requirements for the project were clear from the start: the company wants to significantly increase its production capacity by relocating its production. A higher degree of automation and improved product quality should be achieved as well. Furthermore, the move was intended to make the production processes more transparent in order to reduce throughput times and optimise delivery reliability towards dealers and customers.

After an initial analysis of the business processes and the IT infrastructure, it quickly became clear that the extensive goals for the new plant could not be achieved solely with the installation of new machinery and equipment. In addition, fundamental changes in the vertical process and the operational organization had to take place. Increased productivity cannot be achieved by focusing on the purchasing of new machinery - modernisation has to go hand in hand with far-reaching, strategic changes throughout the whole company. Schuler Consulting supported the manufacturer in this process of change with technical and strategic factory planning.

The initial situation we encounter with this group of companies is not unknown to consultants in China. Many customers express very ambitious plans to advance digitalisation and automation in their production. Local or international suppliers offer them the appropriate products and technically mature solutions for this. However, the information technology foundation in the vertical process from order entry to the machine level often has substantial deficits - their elimination requires not only a clear strategy, but also a lot of time.

At the beginning of the project, our team carried out an in-depth capacity analysis. In doing so, we considered scenarios for the future that depict the development status of production in five, ten or more years. In conjunction with the company's strategic development plan, these scenarios can be used to consider different material flow and machine concepts.

All steps of the planned move in phases were scheduled in cooperation with the customer and recorded in detailed drawings. In addition, the project team created comprehensive equipment inventories, which can be used to plan the investments as well as all necessary technical installations. In the future, in addition to many modern individual machines, an automated system will be used in the melamine parts production section. In this production section, a tandem edging line including a fully automatic circulation system will be interlinked with a vertical buffer, two drilling machines and two machining centres. For the conception of the plant and the final coordination with the customer, we created 3D images and videos that visualised all production sections of the new plant.

Capturing data: From order to production

In parallel, our team determined the central requirements for order entry and initial data generation in several workshops. After an intensive exchange about the future production philosophy and a further analysis of the planned machines and systems, it was jointly decided to make further investments in software. In addition to the ongoing implementation of a new ERP system, the furniture manufacturer will be investing in systems that facilitate order entry as well as production planning and control.

Furthermore, the team examined the information flow of the production data: we analysed how the data flow between the different machines and stations has to look like so that they can communicate with the software systems. In other words, at which point the information must be available and when, and via which input methods it is transferred to the MES and ERP systems. The goal was to achieve the highest possible transparency with regard to progress control and order status in production.

We were able to successfully complete this planning project. Soon the planned increase in efficiency and capacity can become reality in the company's new plant. With this plan of action, the company will become one of the most modern office furniture manufacturers in Asia. Our team from Schuler Consulting will accompany the manufacturer on this path and will also support it in the future with the implementation of further measures.

This project demonstrates what is universally true: only with a holistic strategy that take the corporate strategy, the machine and IT concepts and automation into account will lead to sustainable success.

On track for the smart factory of the future

The first step into your digital future

The experts from HALCON turned their production around with SCHULER Consulting. The jointly developed concept…

Shaping the future together

Burger Kitchens is one of the biggest kitchen producers. With the help of SCHULER Consulting, they managed to…