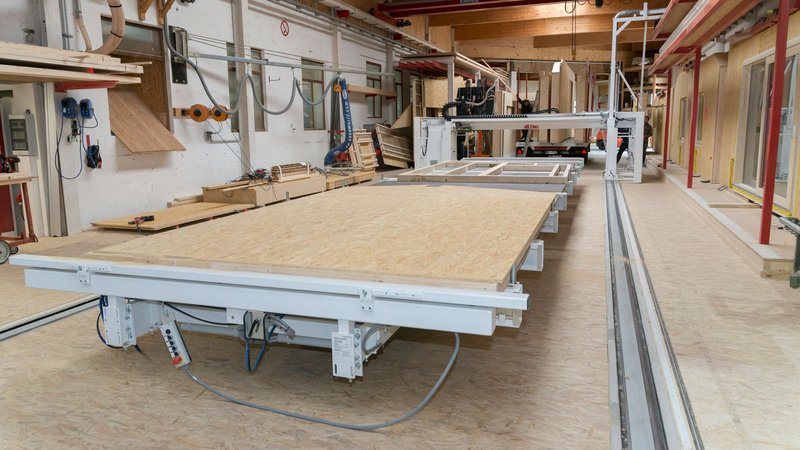 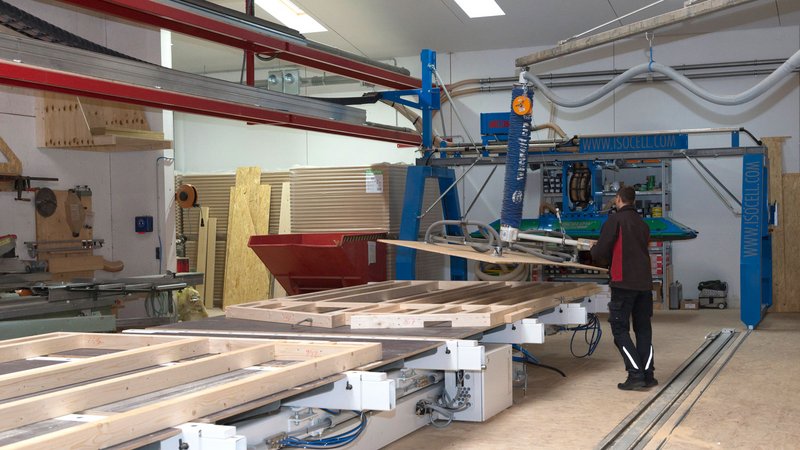 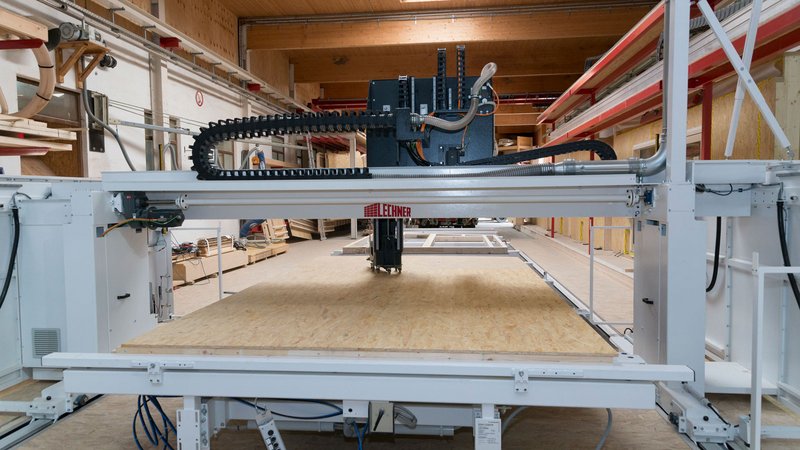 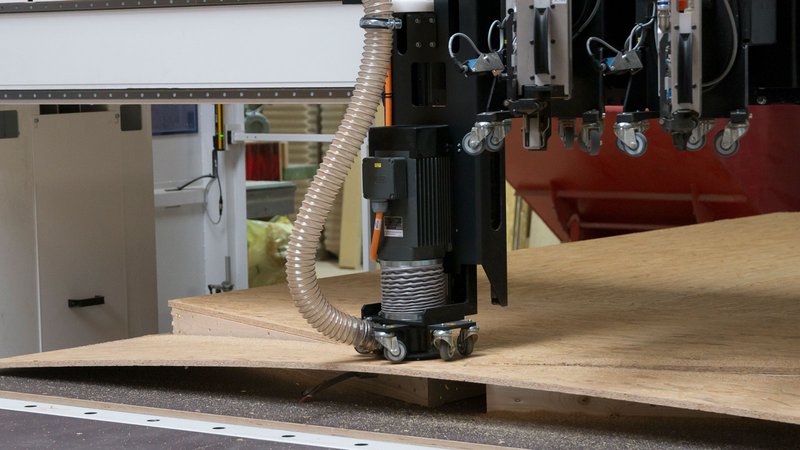 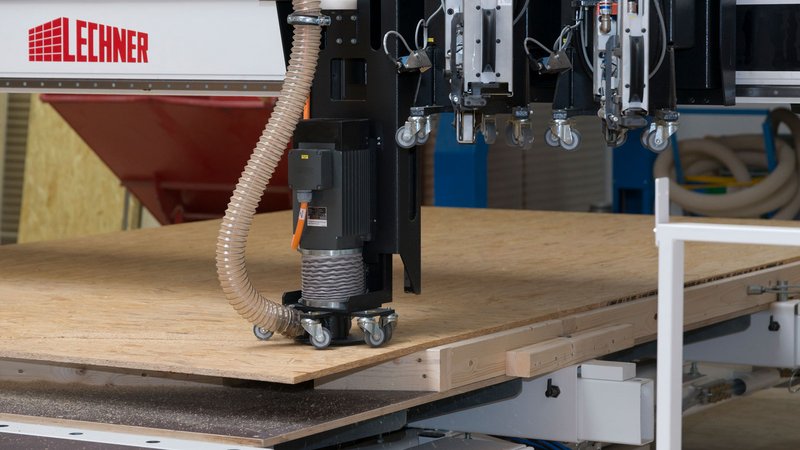 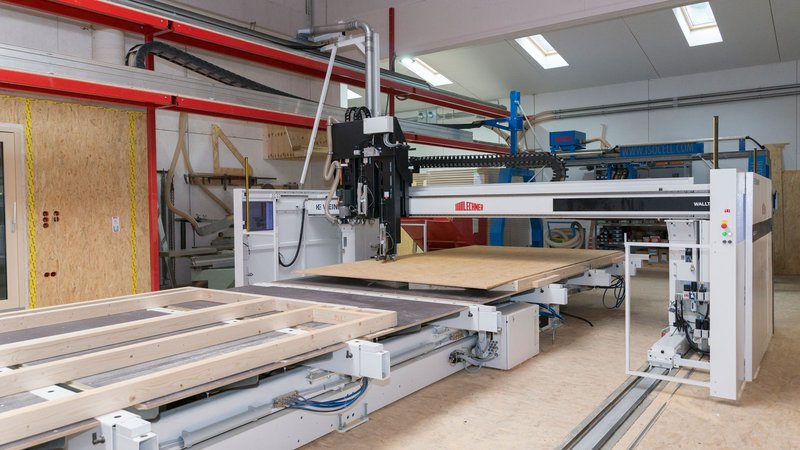 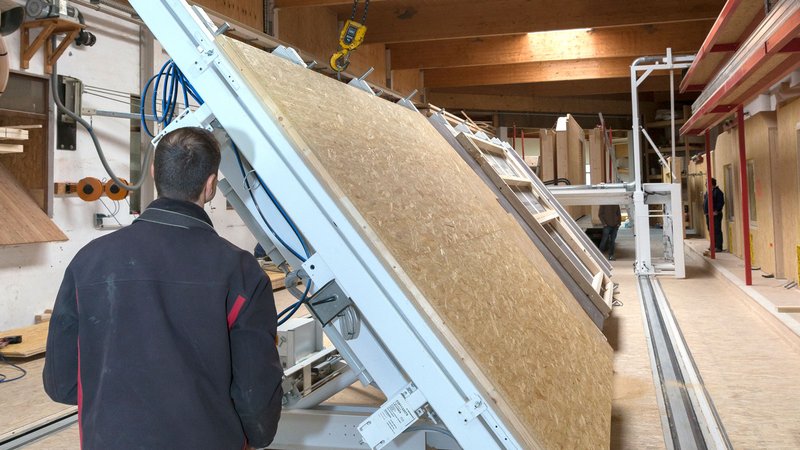 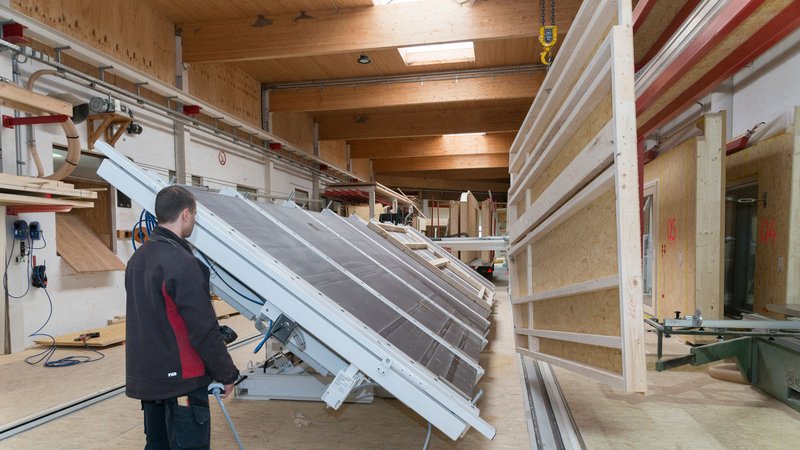 Working ergonomically reduces the physical burden on the employees.

Vacuum lifter make it easier to handle the panel materials.

The WALLTEQ M-120 fastens and processes the elements with maximum precision.

Flexible formatting of the wall element thanks to the routing unit.

Thanks to the compact design, the WALLTEQ M-120 is easier to integrate, even with limited production space.

The tilt function ensures easy and safe tilting of the wall elements without the risk of any damage.

The assembly table tilts the elements quickly and reliably and makes removal with the overhead crane easier.

"The new production process simplifies the planning in the plant and minimizes dimension tolerances and measuring errors."

Johann Lechner GmbH invested in a multifunction bridge from WEINMANN primarily to create more ergonomic and flexible workplaces. The fact that automation led to higher component quality and more flexibility in production were further criteria for investment. The fact that digitalization and automation have now arrived even in small companies is just a consequence of the further development of timber construction. Ultimately, with automated prefabrication, digitalization and automation offer great potential for increasing quality while simultaneously reducing costs. There are also investment incentives through new machines that are specially tailored to the needs and budget of small timber construction companies. Nevertheless this shows that perspective changes with size once again. The profitability factor, one of the most important criteria for an investment in the industry, often recedes behind other reasons for investing in small businesses. This does not mean, however, that these companies lose sight of profitability.

This was the case at Johann Lechner GmbH in Buchbach in Bavaria, Germany. In October 2019, the company put a WALLTEQ M-120 multifunction bridge from WEINMANN, with one routing unit and two fastening units, into operation. Founded as a carpentry business in 1952, the company soon entered the world of the solid construction of buildings. Since the mid-1990s, the company has also been offering its houses as timber frame constructions. Today, with Johann and Thomas Lechner, the second generation of the family has taken over the management of the business. With their 29 employees, the two brothers build around ten timber houses per year, preferably turnkey houses with ecological construction materials. Each house is usually planned individually, with the products on offer ranging from simple basic fittings to a smart home in the Efficiency House 40 Plus standard with a bus system, photovoltaic system and house battery. The number of solid construction detached houses is at approximately the same level as timber house construction. The company is also active in the construction of commercial and apartment buildings in this business area. Johann Lechner GmbH also builds hybrid buildings, for which the entire value creation chain – from the supporting concrete construction to the outer shell made from wood – is in-house. The development of the market in recent years has shown even in Buchbach that, with the importance of topics such as climate change, sustainability and healthy living, the demand for timber houses has continually increased. "This is true above all for young developers, who are often prepared to spend more money on an energy-optimized house made from ecological construction materials to save money over the long term thanks to the energy optimization," explains managing director Thomas Lechner.

However, this trend was not the decisive reason for the automation. When the management pair invested in the multifunction bridge, their main priority was improving the work conditions and processes. Of course, the chronic lack of personnel was also important in this regard, as it has become difficult even in Buchbach to get skilled workers for timber construction. Flexibility was also an important issue – again initially with a view to the workplaces. This was because one of the established employees had expressed the desire to reduce their working week to 30 hours. At that point in time there was no opportunity for the employee to do this, as he was one of a team of two in manual production who worked closely together and were dependent on one another. Therefore, one of the aims of the investment was to use automation to redesign element production as a one-person workstation. Four months after commissioning the WALLTEQ M-120, this aim has now almost been achieved. Managing director Johann Lechner: "The processes still need to settle somewhat, but then the second employee from element production can switch to finishing and the production of roof and ceiling elements — and cut his working hours as desired." The company's flexibility has also increased in another aspect: with the multifunction bridge, the company can react more quickly to orders at short notice. And because two employees have been trained on the machine, a two-shift operation is possible if order peaks have to be processed quickly. "We would then shift the finish to the construction site, depending on the order," explains Thomas Lechner: "The production system therefore means that we can work in various ways and have options that we didn't have before."

The continuous digitalization also presents new options in the planning and production process. Where previously, details such as sockets that were planned in the work preparation phase had to be drawn again and aligned and executed manually on the table, today, the finished data records are passed on to the machine directly. "That simplifies the planning in the plant and minimizes dimension tolerances and measuring errors," explains Thomas Lechner. "It also improves our reliability for customers: when we discuss and approve details such as the socket positions in the planning meeting, I can now transfer these details 1:1 to planning and be sure that they will be executed very precisely." In light of such improvements, the focus of the carpentry business was decreasingly on the profitability of the system. For Johann Lechner, halving the number of production workplaces means that profitability is given anyway, especially as elements were already prepared in great detail in the work preparation phase even before the automation, meaning that the additional effort for creating the data was reasonable. "Of course, we had to optimize details, but that was very much a desired effect," remembers Sebastian Heller, production manager and work preparation employee: "It was clear to us that, for a lot of the details, we had made them too complicated. We now had to simplify them so that they ran over the production system better. For example, we used to have a groove at the corner joint but now, we build with blunt corners. We pull the elements together precisely using the corner bore holes, which, thanks to the multifunction bridge, now also run through the sheathing. The bottom line is that such detail optimizations have reduced the assembly times, minimized the sources of error and improved quality management. Over time, the additional effort needed at the beginning decreases significantly as soon as the new standard details have been created."

Despite all the benefits, the company in Buchbach would probably not have automated its production if the WALLTEQ M-120 had not come onto the market in its current form: "For our situation it was the ideal solution because it matched our budget and our hall precisely." The latter in particular proved to be an obstacle to modernization due to the limited space available. It was the suggestion from a WEINMANN consultant that provided the carpenters with a satisfactory solution: "He recommended a multifunction bridge with a compact assembly table," explains Johann Lechner. "That meant that we didn't have to invest in a new hall as well. Due to the space requirements and the range of performance, a larger production line would have been too big for us in every regard." At present, the roof and ceiling elements are produced largely manually in Buchbach. The multifunction bridge is used mainly for wall elements. The WALLTEQ M-120 fastens one element side and they are then turned with the overhead crane. The assembly table also has a function that ensures that the element is brought into position gently and safely. This prevents damage that could be caused when the element is set down, for example, or damage to overhanging sheathing. Once the element has been turned, the wood fiber insulation is blown in with a manual blow-in plate from Isocell. This was already present in the hall and was combined with the new production line without any problems. The multifunction bridge then attaches and trims the second sheathing. The assembly table is then used to place the elements upright before they continue to finishing, where the windows are installed and the facades are prefabricated. This is where the bottleneck of the element production can be found: if the finish station is occupied, the multifunction bridge cannot continue with production. With the current quantity that is not usually a problem.

One house produced in the first week

Johann Lechner is assuming that saving one employee in production will give the company a cost advantage in the hard-fought Bavarian market. He also sees a market advantage in the consistently high quality of the automated production. Interested parties who generally come to Buchbach due to recommendations are regularly guided through production to inspect the modern production system. "That creates confidence, especially as important data such as clamp distances, insertion depths, edge clearances and insulating material quantities are documented by the technology," explains Thomas Lechner. "That is also an advantage for the certification." In light of the good order situation, it was also important to the company that the changeover in production did not cause any production downtimes. "As soon as the multifunction bridge was ready we built our first house on it," remembers Sebastian Heller. The work preparation employees had created the data records themselves during a training course at WEINMANN; the technical department of the machine manufacturer then checked whether there were any potential machine conflicts with automated production. During the production itself, there was a WEINMANN employee in the hall to teach the machine personnel, give them tips and tricks for operating the machine, and to answer questions and provide support in the event of any problems. All in all, the new production system has integrated seamlessly into the operating processes and four months after commissioning, the changeover process in work preparation is largely complete. "It's now a matter of tuning and adjusting. At every construction site there are suggestions for how things could be done better." The greater options have therefore led to a permanent optimization process that the employees in assembly are also involved in.

For the family company founded in 1952, sustainable and efficient construction is particularly important. The carpentry business is socially responsible and places great value on the health and safety of its highly qualified employees. Ultimately, it's not just the high quality that's impressive but also the wide product range.

With the new compact line from WEINMANN, Holzbau Henz is producing elements at a consistently high quality and…