German machine technology as the key to success 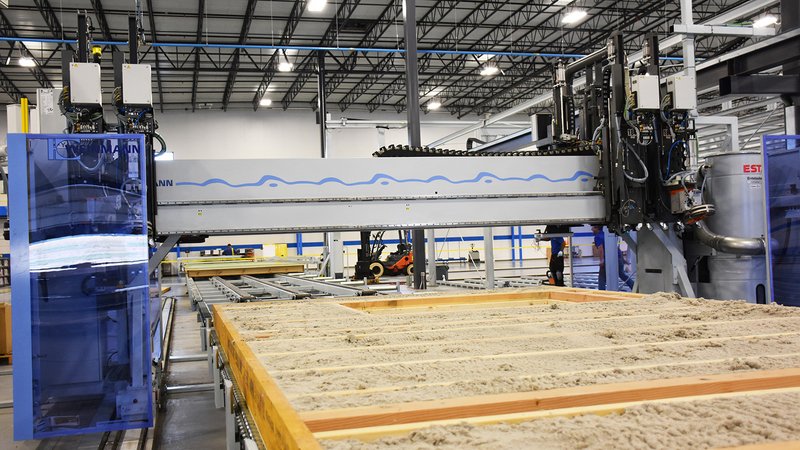 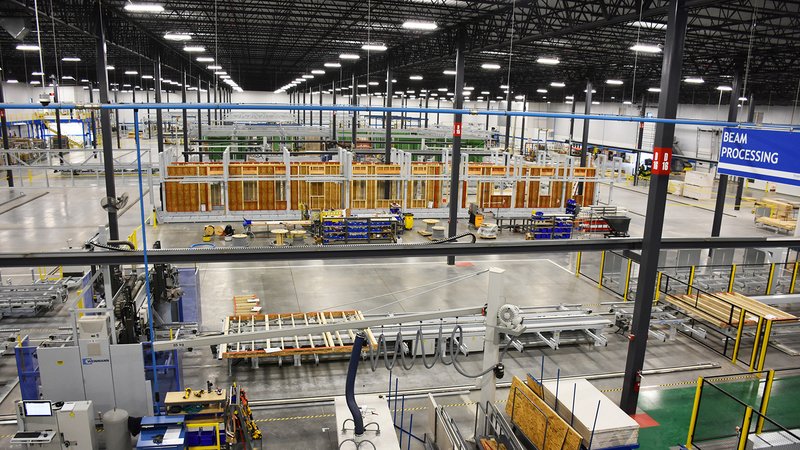 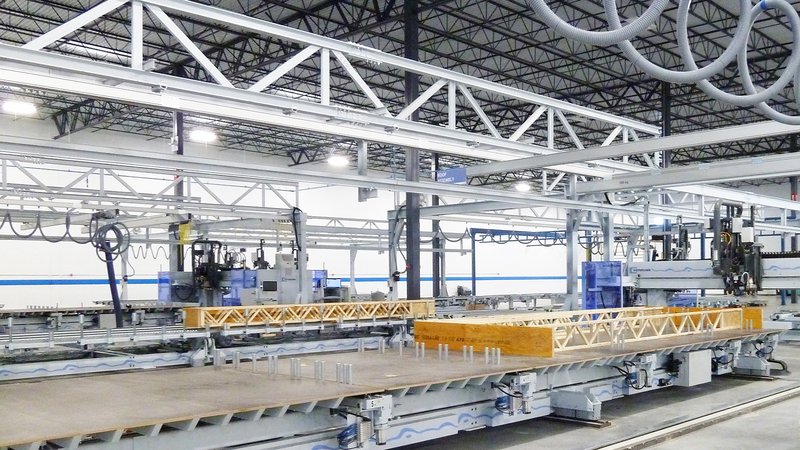 “It is therefore not an overstatement for me to say that Blueprint Robotics and WEINMANN are in the process of revolutionizing the way Americans build.”

Initially, Karim Sahyoun asked his Munich friend to introduce him to WeberHaus in order to inquire about their equipment. That request led to WEINMANN, the specialist for the design and delivery of production lines for timber construction. Besides, during the following 12 months, WEINMANN was ultimately recommended by virtually every prefab house company Karim approached in the course of his comprehensive market study. In contrast to the competitors in the industry, WEINMANN understood the potential presented by the US. Concepts were worked out and discussed intensely with the American prospective buyers.
This led to Blueprint Robotics management forming a strong relationship with this German HOMAG subsidiary. Numerous visits of the Blueprint Robotics founders Jerry Smalley, Sascha Bopp and Karim Sahyoun took place at the WEINMANN headquarters in St. Johann in the course of the planning and projecting phase. A decisive factor for the decision in favor of WEINMANN, Karim Sahyoun reports retrospectively, was Hansbert Ott, managing director and head of sales & service for almost 25 years. Karim Sahyoun is quick to say: “Hansbert’s genuine enthusiasm as well as his genius was evident immediately, and in general, it had become clear to us that no company in the world came even close to matching WEINMANN’s capabilities and ingenuity.

What had been an idea and a plan became real in March 2015 when funding was provided by a major investor, Invus Group. And what began as a three-man company, today is a fast-growing enterprise employing more than 80 people in a brand-new 20,000 m² facility in the city of Baltimore. This location has been carefully chosen, because the port of Baltimore is only 2 km from the company headquarters, and the city has an excellent road and rail network. Blueprint Robotics produces both single-family homes and multifamily apartment buildings. Unlike the majority of German prefab companies, Blueprint Robotics offers no home designs of its own, relying instead on their customers’ unique architectural plans. And the company never sells directly to homeowners, focusing its selling efforts on builders exclusively. In addition, Blueprint Robotics doesn’t construct the entire house. Karim explains the company’s mission as follows, “We manufacture and install what I would describe as a three-dimensional canvas on which the builder can put his finishing touches. What we deliver is a structure that, on the outside, is completely protected from the elements, on which the builder can put the type of roofing material and external cladding that he desires. On the inside, all the windows and doors are installed in the factory, as is all the plumbing, electrics, HVAC rough-in, allowing each panel to leave the factory closed. The last step of our installation process involves finishing the drywall, leaving it ready for the builder to paint or wall paper. The builder undertakes the finishing work, including tiling of bathrooms, installation of kitchen cabinets, and any ornamental work. We avoid doing any work in which we cannot leverage WEINMANN equipment to deliver superior products at market competitive pricing. What we offer our customers is certainty - quality certainty, cost certainty, delivery certainty.”

The WEINMANN wall production line starts with a WBZ 160 carpentry machine where the beams and studs required for the timber frame work are cut. The second machine in the processing chain is a WEM frame work station equipped with an automated stud feeding portal. Then there are three assembly and transport tables over which a multifunction bridge moves to carry out different processing steps such as nailing the sheathing on the frame work by means of a powerful nailing unit. As soon as the first panel side is finished, the element is turned using a so-called butterfly turning table. An assembly table then transfers the element to a line where any electrical and plumbing work is installed. A further transport table places the element under the multifunction bridge. There, loose cellulose is blown into the framework compartments. This is not only a most environmentally-friendly, waste-free process, but also a real innovation in this industry. For the Blueprint Robotics project, the Austrian insulation specialist Icocell and WEINMANN have combined their technologies. Via a specially developed interface, the so-called blow-in plate, installed at the multifunction bridge, is positioned fully-automatically over the respective frame work compartments, so the insulation material can be blown-in. The use of loose cellulose as an insulation material offers Blueprint Robotics numerous advantages: The filling of the compartments happens smoothly and is done very quickly. Furthermore, the fill-in volume is monitored and documented which again represents a great advantage with regard to quality control.
Overall, Blueprint Robotics makes an industry-leading commitment to sustainability by reducing material waste in excess of 70% during its entire construction process. The company employs a “Zero to Landfill” approach that ensures all recyclable materials are recycled. The new state-of-the-art facility is truly impressive and optimizes workplace safety.
But let’s go back to the workflow: Finally, the finished panel is moved to a further working table where the second side is formatted and sheathed. From there, by means of a tilting table, the product is transferred to a huge wall magazine where the edges of the plasterboards are sealed and the windows, sliding doors and the like are installed. With custom-made transport trolleys, the completed wall elements are moved to the huge wall magazine which is also a customized WEINMANN device. Four to five elements at a time are pushed onto a loading trolley, packaged and wrapped with foil for transport. By means of a wall removal track, the packages are transported to the respective transport means where they are loaded with forklift trucks. The roof-/floor production line is almost identical to the wall line. It also starts with a carpentry machine. Here, too, removal tracks enable the installation of electrical and sanitary installations during the production process. A WEINMANN carpentry table WTZ serves as a framing table, and at the same time it is used as a turning table for a further butterfly turning solution. Another NC-controlled clamping table completes the solution.
As with the wall system, a multifunction bridge equipped with screwing units moves over the assembly tables. A transport table forms the end of the plant.
The huge advantage of these automated production lines – apart from their processing speed and unbelievable accuracy – offsets the increasing shortage of skilled craftsman in the US since millions of construction workers left the industry (or retired) after the economic downturn in 2008. In December 2016, after WEINMANN had completed the equipment installation, testing and calibration, Blueprint Robotics started producing for customers.

A business vacuum waiting to be filled

All the experience gained during the operation of this facility will soon be incorporated into a second facility on which Blueprint Robotics has already placed a deposit. By the third plant, Karim expects to have a system in place that will allow them to open plants at an ever increasing rate. “We are addressing a $460 billion industry so we have a lot of opportunity and a lot of work ahead of us. Considering that in a ‘normal year’, roughly 1.4 million new housing units are built in the U.S. and of these, 1-1.1 million units are single family homes, there is an enormous business potential. As the pre-fab market in the U.S. is comprised almost entirely of companies that use a modular construction approach, and these companies are almost all located in remote areas where labor is very cheap, they build practically everything by hand as they would on the home site. They just do it in some covered enclosure. As a result, the quality of their products is inconsistent. In addition, the geometry of the modular method imposes significant design limitations. That’s why the word ‘pre-fab’ has a rather bad connotation in the US. In the consumer’s mind, pre-fab seems to be equivalent to poor quality and bad design.” In order not to fall into this category, Blueprint designates its offering as ‘system built solutions’. Immediately following the execution of every client contract, the company secures a state approved set of drawings that are professionally stamped for the builder to use in application for local building permits. In a matter of days, the company’s robotics system constructs each element of the project in the panelized form. Subsequently delivered and assembled on a builder’s foundation by the expertly trained Blueprint Robotics workforce, each structure will be up and weather tight within 3-4 days. Karim Sahyoun: “It is therefore not an overstatement for me to say that Blueprint Robotics and WEINMANN are in the process of revolutionizing the way Americans build.”

Blueprint Robotics uses state of the art manufacturing techniques to offer wood-framed construction solutions with unparalleled precision, quality and speed without any design limitations. We exclusively serve professional builders, general contractors, developers, and architects to enable them to fully realize their plans and build high quality projects that homeowners will love.