On November 23 and 24, carpentries, prefabricated house builders, suppliers and industry experts all came together at the WEINMANN premises in St. Johann, Lonsingen (Germany). New industry trends and future developments were showcased alongside the latest machine technology in the form of technical presentations and accompanying exhibitions. Around 300 visitors joined WEINMANN in St. Johann. 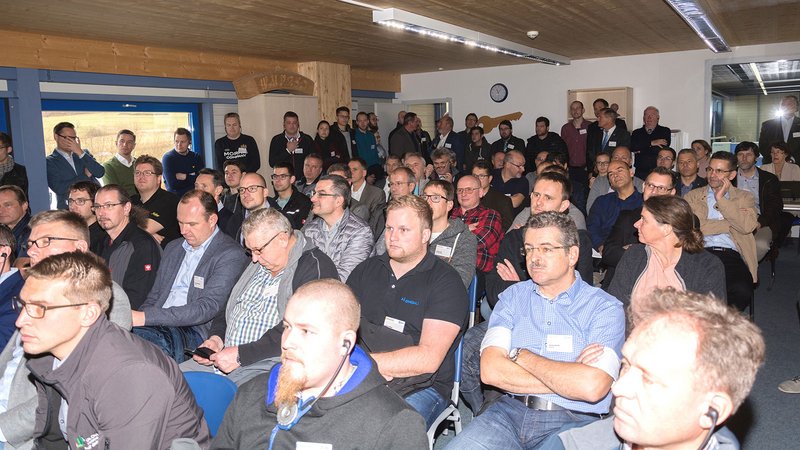 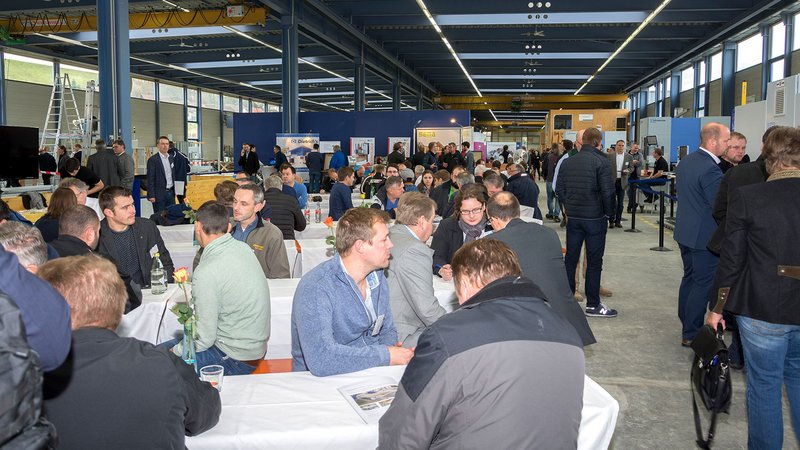 One of the highlights at the WEINMANN Treff was the carpentry machine which impresses with the high accuracy.

Experts of software and service as well as a big exhibition offers many different information.

YOUR SOLUTION for timber work.

The WMS 060 had already received thoroughly positive feedback when it was unveiled at the Ligna trade fair in Hannover, and this feedback has been consolidated by customers who have been using the machine for almost three months. The wide range of applications suitable for the multifunction bridge also impressed at the WEINMANN Treff — applications involving different wall structures or wall geometries and the manufacture of roofs and roof elements are all possible. The WMS 060 is also used in small-diameter timber markets such as the USA or UK.

Equipped with chucks for the stapling and nailing devices and a routing unit to facilitate fastening and processing of the planking. Openings for windows, doors and sockets, as well as free forms such as circles, curves or diagonal cuts can all be processed, with the result being finished elements with a high level of dimensional accuracy. The machine has also been configured to enable small and medium-sized joineries that manufacture small quantities to start benefitting from CNC-controlled production.

Another highlight of the multifunction bridge is the newly developed easyRun software tool, designed to make data generation much easier. This tool allows simple, rapid data entry directly on the machine when required. Simple processing tasks such as nailing the planking, routing the openings or formatting panels can be carried out without the need for a CAD system.

However, fully automatic data transfer from a CAD system is still possible. The operator opens the data record on the machine and begins the processing task. Thanks to its intuitive powerTouch operating system, the machine is easy to operate without the need for specialist knowledge.

The stapling and routing devices were demonstrated live on the multifunction bridge: The planking was automatically fastened using both stapling devices. The machine accurately implements the stapling distances predefined in the CAD system to guarantee the structure of the elements.

The integrated routing unit inserts the door and window openings and socket recesses into the element. Visitors were impressed by the interpolating processing workflow that enables forms such as circles, curves or diagonal cuts. Existing thickness variations in the element are tracked and compensated using the tracing routing unit.

LignoLoc® — the first wooden nail that can be shot in: Now in conjunction with the WMS 150 multifunction bridge

Beck has developed a new fastening aid — wooden nails that Fully automatic beam processing:can be shot in pneumatically, without the need for predrilling. These exact nails were used fully automatically for the first time in the WMS 150 multifunction bridge at the WEINMANN Treff. The wooden nails are inserted into the element to fasten it via the nailing device and magazine attached to the WMS 150. The data is transferred fully automatically from the CAD system and the nails are inserted into the element at the relevant points. The whole process is fast, precise and environmentally sustainable. The versatility and flexibility of the multifunction bridge is further demonstrated in this respect: The planking is fastened fully automatically regardless of the fastening aid or fastening device in use; be it with screws, nails, staples and now even wooden nails.

Fully automatic beam processing:
All six sides of a component in a single run and with maximum precision

WEINMANN also presented two machines that use beam processing technology. Its compact design means that the WBS 140 carpentry machine requires just 140 m² for 13 m of unprocessed parts yet it still offers a large number of processing options. The highest precision was demonstrated in processes such as dovetail connections, angular and curved cuts and grooves.

The integrated underfloor unit is a highlight of the WBZ 160 powerSIX beam processing machine. All six sides of the component are processed in a single run, significantly increasing both performance and precision. Dovetail connections, lap joints and many more processes were completed live, demonstrating the range of applications offered by this carpentry machine.

With their compact design and flexible usage options, both machines can be adapted to suit individual requirements. The high level of processing precision is provided by an NC-controlled gripper system that is combined with vertical and horizontal clamps.

The utilization factor of the machine is further increased and handling of components is simplified considerably in combination with the fully automatic material feed and storage technology. The continuous production flow significantly increases the productivity of the whole production process. All over the world, manufacturers of prefabricated houses, such as Wolf Haus (Austria) or Groothuis (The Netherlands), are already making use of this combination of a beam processing machine with a handling portal.

Following WEINMANN's robotic solution revealed in 2016, another production cell using robots was presented this year. The system is being delivered to Lindbäcks in Sweden, the company that is creating Europe's most modern production plant. The wall production line is designed to completely finish one wall every seven minutes. To achieve this throughfeed time, the plant is fitted with several new technologies — including the robots.

A presentation from HOMAG described how robotic technology is being used increasingly more often in timber work. The presentation described different applications, features and benefits of using robots, as well as showcasing the production cells that Bien-Zenker has been using for almost a year.

This combination of humans and machines provides a level of flexibility, precision and speed that has not existed in timber work until now.