The vision has already become a reality - robots in timber work. When frame works are being created, the robot can achieve up to 6 cycles per minute. 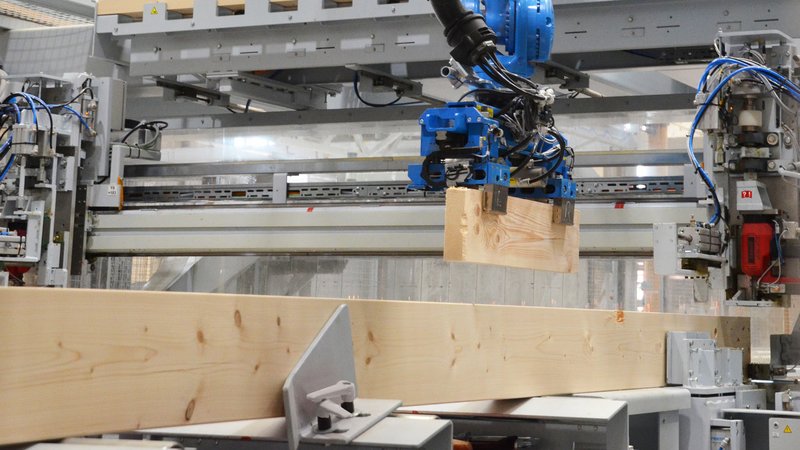 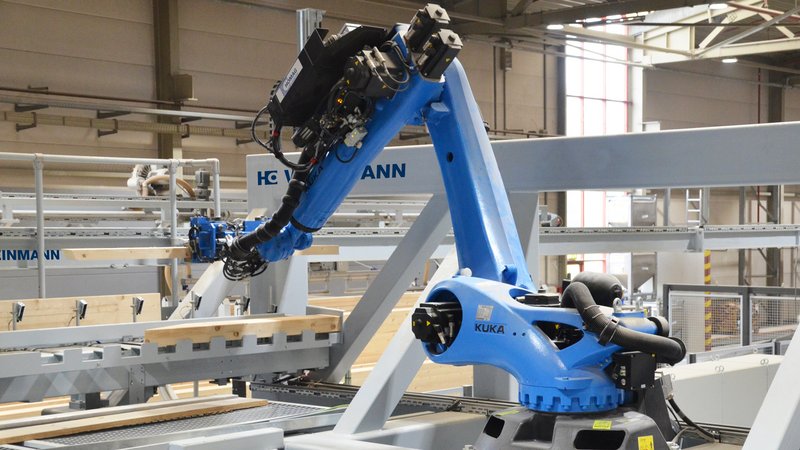 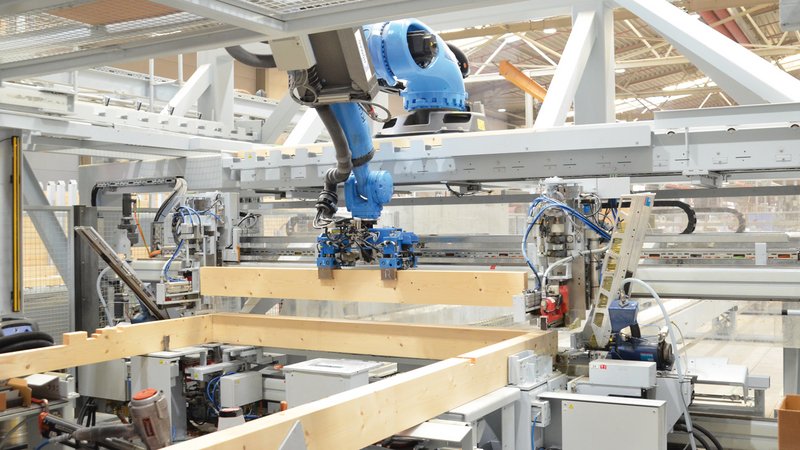 The timber is deposited crosswise, longitudinally or diagonally, depending on whether it is a plate, stud or, for example, a spandrel beam.

The timber is collected from multiple provision stations by the robot.

The vision has already become a reality - robots in timber work
A few years ago, the use of robots in timber work was seen as a vision for the distant future. In 2017, however, WEINMANN planned and delivered two production lines with integrated robots. But what makes this technology so interesting and what opportunities does it offer for the future? And above all, what areas can the technology be used in productively?

In principle, robots are very versatile. As early as 2016, just under two million robots were active in a wide range of industries around the world. A key feature of robots is that they have a very high availability level - up to 99.9%. This is due to the use of standardized components that have been tried and tested thousands of times, which minimizes downtimes and increases added value. What's more, due to the high-quality, closed kinematics, robots are extremely low-maintenance, with maintenance only required every 10,000 operating hours. Closed guides and gears, which are not susceptible to dirt and dust, ensure a working environment with low levels of noise and dirt. The low noise level enables quiet production, at less than 75 dB. The long service life and high utilization factor result in low maintenance and replacement part costs.

In the furniture industry, HOMAG is already using robots along the entire process chain. Robots are integrated in the production process from panel manufacturing to surfaces, cutting, drilling, and trimming, through shaping and edges, up to assembly and final insertion and packaging. The first use of robots in timber work is for frame work production, where they are used to insert the plates and studs. The robot can access both standard beams and special beams, as well as top and bottom plates with lengths from 780 mm up to 3,500 mm. Cross-sections of 40 x 100 mm to 160 x 250 mm are possible. Longer top and bottom plates are fed in directly from the carpentry machine. The maximum part weight that a robot can pick up is 75 kg and the six-axis robot has a working radius of 3,500 mm. The robot is actuated via a wup data record and the collection and deposit positions are calculated by WEINMANN. The part weight, the installation position and the installation routine are all incorporated into this calculation. The travel program of the robot control system calculates the travel path from the collection point to the insertion point.

At Bien-Zenker, a German manufacturer of prefabricated houses, the robot is integrated in the frame work station and accesses the different beams. Bien-Zenker thus produces almost all elements, regardless of whether they are wall elements or special elements such as gable, window, and door constructions, fully automatically. The timber is collected from multiple provision stations, depending on whether the beams are processed or unprocessed. To ensure that the timber can be picked up quickly, the grippers are fitted with compressed air or servo motors. The timber is deposited crosswise, longitudinally or diagonally, depending on whether it is a plate, stud or, for example, a spandrel beam. There are different approach programs for the different types of timber which allow the timber to either be inserted directly or rotated in various axes. With this highly efficient and flexible production line, Bien-Zenker has created an important basis for the future and produces 800 houses each year. When frame works are being created, the robot can achieve up to six cycles per minute. At Bien-Zenker, this technology reaches three cycles per minute due to the complex insertion operation. As well as increasing capacity, the system has led to an increase in accuracy and has significantly reduced the heavy manual work. There is also a significant added value in the increased flexibility with regard to production options. René Honrath, head of the technical division at Bien-Zenker, explained: " "We decided on the robot because we wanted to reduce the physical burden on the employees. The robot also offers greater flexibility than other systems because it can access processed and unprocessed beams from two different positions fully automated." In 2018, the largest and most modern house production facility in Europe was set up at Lindbäcks in Piteå, Sweden. Lindbäcks produces around 3,500 modules per year over an area of 42,000 m². They also use robots in production. Again, the robot is responsible for inserting the timber in the frame work and is integrated in the frame work station. Because Lindbäcks modules are produced to a high level of standardization, the beams are largely clearly-defined standard beams. The robot inserts them in the frame work fully automatically and achieves up to six cycles per minute at its highest speed.

These two examples show just one possible use of robots in timber work where production efficiency is significantly increased. If we look at the process chain for the construction of houses, using a robot makes sense in a wide range of applications. Once the beams and timber have been cut and processed, the robot comes into play for the first time in the creation of the frame work, as described above. After the sheating and panels have been prepared, they are laid in place. Robots could also be used in this process, as their use in handling activities significantly reduces the workload for employees. The robot is also ideally suited for assembly activities such as positioning electrical sockets or inserting electrical or heating systems. Robot technology can also be used to attach labels or plaster before the element is finally picked and loaded. Jörg Groß, head of the project department at WEINMANN, sees great potential in this field: "We are at the very beginning of development and just like in the automobile industry, processes will develop very quickly. We have to think ahead and, together with our customers, develop and implement practicable concepts." The robot technology offers a wide range of operations and will certainly influence timber work significantly in the future.