When is it worth investing in a compact system for a carpentry business? 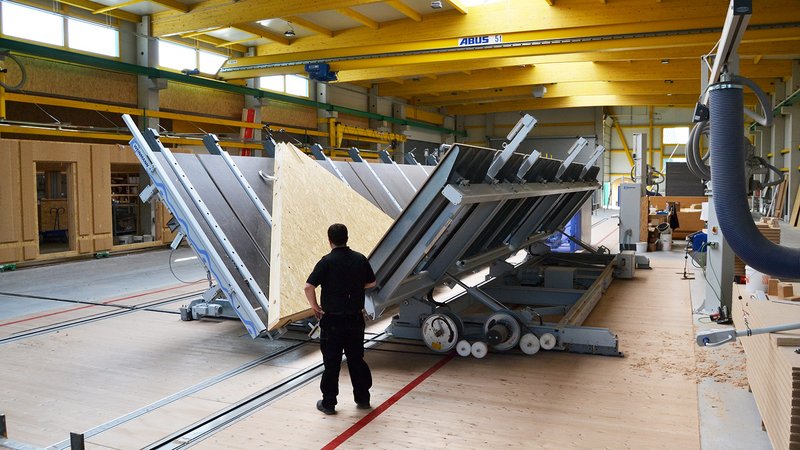 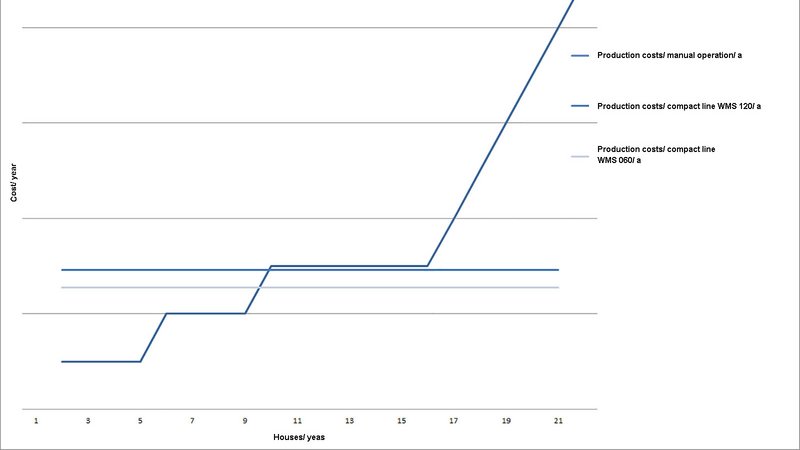 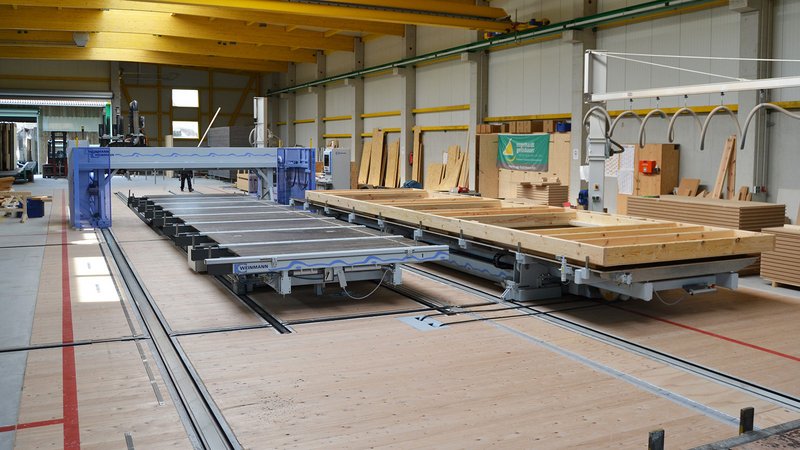 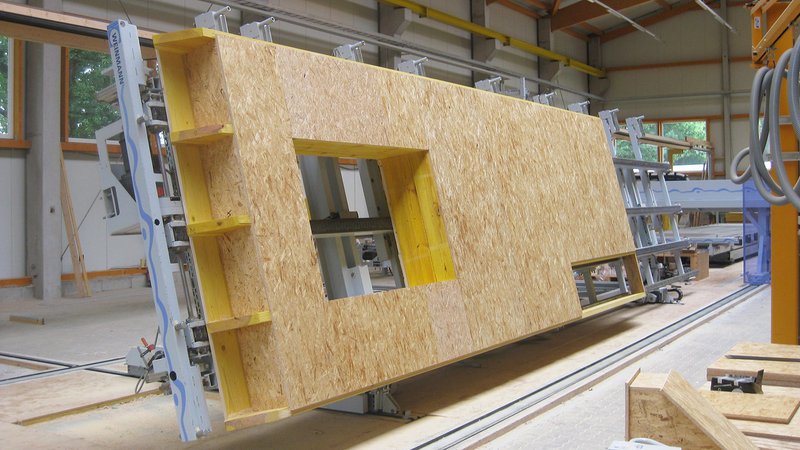 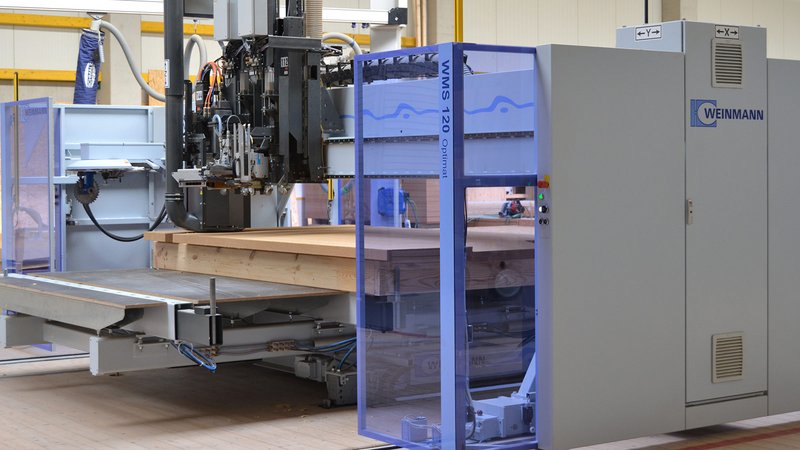 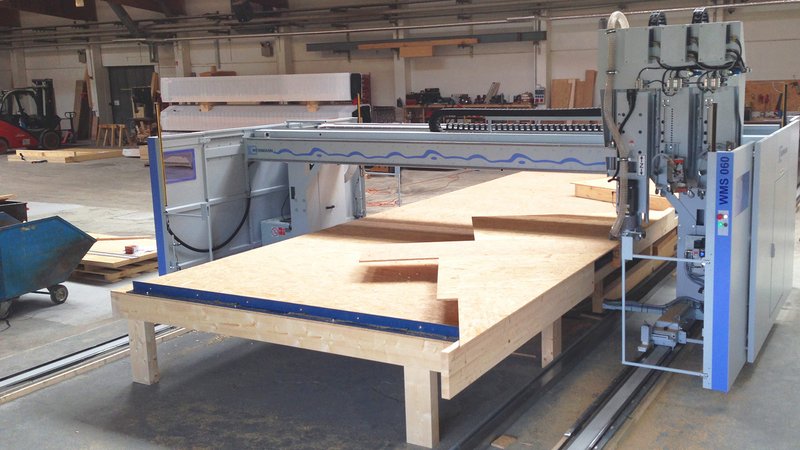 The elements are turned using the butterfly turning table, eliminating the need for an overhead crane. Photo: WEINMANN

Today's timber construction industry is characterized by increasing workloads and individual customer requirements. An ever-rising level of prefabrication is providing extra support in this sector. When deciding to switch to automated production, many companies have profitability and flexibility in mind.

At the moment, the majority of businesses are running at high capacity. One factor that contributes to this is the positive trend in prefabricated houses. Recently, the Association of German Premanufactured Building Manufacturers (Bundesverband Deutscher Fertigbau e.V. - BDF) reported that the number of building permits had increased by 4.1% to a record level in the first half of 2017, and that the market share for prefabricated construction had risen to 19.3%. Appropriate production technology is needed to keep up with the resulting demand and be able produce the required capacity. It is not just the issue of profitability which is important here, but also flexibility. Particularly when it comes to smaller companies, orders are usually extremely customized and require batch size 1 production. For this reason, technologies have been designed specifically to meet the needs of the timber construction industry, for example assembly tables and multifunction bridges.

One solution found frequently in carpentry businesses is known as a "compact system." This consists of a multifunction bridge and a butterfly turning table made up of two assembly tables. As space is often very limited on site, the compact system is designed in such a way that it requires minimal space, meaning it will fit even in the smallest of premises. All of the elements will fit in just 34x9 m². The manufacturing process consists of the following steps: The frame work is initially created manually on the assembly table, with various equipment options facilitating this process. For example, stops and clamps predefine the insertion positions and belts and studs are situated at the correct angle to each other. After the planking is set in place, it is secured and processed fully automatically using the multifunction bridge. The planking is secured using either nails, staples or screws. During processing, the outer edge is formatted and door, window and socket openings are made. These can be trimmings, saw cuts, bore holes and much more. For this, the multifunction bridge is equipped with a 12-part tool changer that provides the required tools and replaces them quickly and directly. Rabbets, installation ducts and socket holes can also be easily added to an installation level, as well as markings and labels. Once the first side has been processed, the element is turned using the butterfly turning table, the necessary installations and insulation are inserted and the element is closed. The second side of the element is likewise secured and processed fully automatically using the bridge.

When it comes to batch size 1, one or two people are sure to wonder to what extent it is possible to manufacture various elements using this technology. As mentioned at the beginning of this article, in carpentry businesses the range of products is very broad and different element dimensions and wall structures such as soft wood fiber, gypsum or OSB are part of the day-to-day routine. The multifunction bridge is designed and equipped in such a way that all of these elements can be processed. The same is also true for different dimensions and elements, such as gables, flap tiles and roofs/ceilings. It does not matter whether manufacturing a multi-story building for the city or an individual detached family house is on the agenda for today, as this technology enables production in batch size 1. Engelhardt & Geissbauer GmbH, for example, switched their construction from an installation level of squared timber to solid wood fiber board in which the installation ducts were machined. This required no adjustment to the machine technology. If additional processing is subsequently required, subsequent upgrading is also no problem; various options such as glue or screw units can be integrated at a later time.

Continuous data flow - from CAD right through to the machine

When automated production technology is first introduced, some increased effort is required in terms of work preparation. However, once the data is created, it can be used again and again. A wide range of wall structures and connection details are available in the CAD systems. The CAD data created is transferred to the machine and the operator can start the machine directly after opening the relevant data record. One advantage of data being transferred directly to the machine is the continuity of the data. There are no transmission errors, as the same data is used in all processes. Master carpenter Daniel Hamdorf, who switched to automatic production in 2008, describes the effect it has had: "The level of effort involved in work preparation has increased. However, this effect is more than compensated for by the shorter production and assembly times that have become possible due to the increased component precision and level of prefabrication." Stefan Bauereiß, authorized representative at Engelhardt & Geissbauer GmbH, estimates the extra effort involved in work preparation per house to be around 8 hours. That means with only 6% more effort in the planning stage, the business gains up to 40% more capacity. How this value is reached is described in the following paragraph.

In order to assess the added value purely in terms of numbers, WEINMANN Holzbausystemtechnik established the following amortization calculation for investing in a compact system. These calculations are all based on the compact system described above. On the basis of a production capacity of 1,944 m² per month, a company that operates manually requires 4 employees per day in order to process this volume. This means that the production costs per m² of wall is €10.30, assuming an annual personnel costs per employee of €60,000. For the company to produce the same amount automatically using a compact system, only two people are required. The cost per wall is therefore €6.27 per m², including all costs relating to machine investment and personnel. The company thus makes a savings of almost 40% and this is only with monthly capacity of 1,944 m², as mentioned above. On the basis of this calculation, investing in a compact system pays off once you make 16 houses per year. This is confirmed by a report from an independent business consultation with Koch AG, based in Switzerland. According to this, their compact system is profitable and the company currently produces just 12 houses per year. This means that the system pays for itself, even with very small quantities, while also offering a higher capacity. When used solely for the production of wall elements, up to 70 houses per year can be manufactured using the compact system. If all element types (wall, roof, ceiling) for the house are produced as finished products, capacity is around 30 houses. This capacity is virtually unattainable without the corresponding level of automation, as much-needed staff are very hard to find due to the fact that there is an ever-increasing shortage of skilled workers in this sector. Of course, cost accounting of this kind must always be adapted to the business in question. The amortization of the investment depends on factors such as the type of production, the construction method, the size of the houses, wage costs and many others. Here we will use Brockhaus, which invested in a WEINMANN compact system in 2016, to illustrate this point. Before automating their processes, Brockhaus produced four to five elements per day. Today, seven elements can be manufactured per day using the compact system. Brockhaus has therefore increased its production capacity by 40%. Another example is Engelhardt & Geissbauer GmbH. When they invested in the compact system, the company management team envisaged 60 houses per year as a long-term goal. They now produce 50 houses per year, meaning they are already well on their way, including in relation to their original profitability calculation. Stefan Bauereiß (authorized representative): "It was forecast that the system would help us to increase our productivity by about 15 to 20%, and we have stuck to that. In any case, the compact system is an investment that has paid off for us." For producing small quantities, the manufacturer WEINMANN has recently introduced the WMS 060 multifunction bridge. Equipped with two chucks for stapling or nailing devices, plus a trimming unit, the machine represents a solution that offers a slightly smaller area of application, but also significantly lower acquisition costs. This bridge can also be combined with a butterfly turning table to form a production unit. This solution pays for itself for annual production capacities of 10 houses or more.

A consistently high level of quality

The calculations given above do not take into account the cost savings resulting from the improvement in quality. An automated process keeps quality at a consistently high level. Inaccuracies and errors, an ordinary part of manual measuring and cutting processes, are eliminated. Automation also ensure that the attachment material is spaced correctly, which guarantees the statics. Markings and labels are also applied automatically - as a result, positions of roof battens or panels are fixed to the correct point, which makes the subsequent work steps much easier. The prefabricated elements are assembled at the construction site in the shortest possible time, which leads to more efficient construction site times, meaning the building processes are less dependent on the weather. The increased level of prefabrication also improves added value within the company. For companies that have most of their products manufactured externally, purchase them and just assemble them at the construction site, this brings significant added value in the form of an increase in earnings as well as independence from external suppliers. Particularly in view of the difficulty of finding good, qualified personnel, the positive effect automation has on the workplace should not be underestimated. The work becomes much more ergonomic for the employees. The processing heights at the assembly tables and multifunction bridges are adjusted so that the employee does their work in an upright position and does not have to climb up the element. Heavy lifting work is also largely eliminated. In addition, logistics process are optimized, material stores are positioned directly at the system and material flows are shortened. The company provides its employees with an attractive, clean work space with modern CNC technology.

It is very clear that automation brings great value to businesses. It allows them to achieve higher capacities, improved quality and a wider product range, as well as allowing more options to be offered at significantly higher productivity. Companies that run automated prefabrication thus appear to be very satisfied. As to the question of whether the machine technology pays off, we are seeing a consistently positive image. It is important to think through and plan the transition process precisely. Ideally, experts should be involved at an early stage in the process in order to get the best possible result. By taking a step towards automation, businesses are set up for the future.

Nordhus is specialized in the modular construction of multi-story buildings. The modules demonstrate a higher…