Networked production on course for Industry 4.0

The way in which manufacturers approach the industrial production of furniture is becoming increasingly polarized. While some producers are dedicated to the mass production of a few furniture models in high piece numbers, an increasing number are going down the route of bespoke production focusing on individual customer requirements (batch size 1). The aim here is to achieve the industrial manufacture of customized items of furniture which formerly had to be specially made to order by a joiner or cabinet maker – ideally at costs similar to those of mass production.

One aspect both these production methods have in common is that industrial production of workpieces generally takes place not on individual machines, but using several machines and handling devices linked to create production cells.

To achieve reproducible quality when processing components and at the same time keep downtime spent on machine resetting to an absolute minimum, machine adjustment processes are generally automated. Manual adjustment is naturally still possible with the aid of counters, however this comes at the cost of markedly increased machine downtimes.

Series production: Reference number as a guarantee of quality
Series or mass producers who file all the setting parameters of relevance for a specific production cell under what is termed a reference number can expect to reap decisive benefits. The reference number contains both the values for automated settings and also the values for the settings of a processing machine or complete production cell that have to be performed manually. This means that by entering a single reference number, they are able to precisely reproduce the machine settings, giving them the assurance of a consistent quality standard. The manual creation and management of these reference numbers, of which there are generally only a few, can be carried out directly at machine or cell control system. As a result, connection to the production engineering department is not an absolute necessity.

Batch size 1 production: Networking is the key to bespoke furniture
The situation is generally somewhat more complex when it comes to batch size 1 production. Here, the machines or complete plants are generally designed in such a way that every workpiece can be produced as a one-off. All the settings required here are fully automated in order to keep downtime to a minimum. Given the diversity of parts required, this cannot be stored manually in advance at the machine or cell using a dedicated reference number. The setting values often only result from the information provided for a concrete order. Manual data input at the machine’s control system directly during production does not make sense in this case, this would take far too long and result in poor productivity. Linking this type of plant or machine to the production engineering department is absolutely essential. As Fig. 2 illustrates, interaction can far exceed the simple connection described above.

In the HOMAG Group, this is known as “networked production”, and is a milestone towards the aspirational goal of “Industry 4.0”. The HOMAG Group is already well on track towards this goal, and offers a wide range of different solutions for “networked production” which together exert a cohesive flow of information from the customer order through furniture production to shipping – as a fundamental key to success.

The workpiece at the heart of production
“Networked production” in the HOMAG Group comprises the following five main elements:

The workpiece forms the central element. Each one is a one-off and, as described above, requires its own specific data to ensure it is correctly processed. As a result, every workpiece possesses its own unique identification number which allows it to be recognized at any time. Generally, this is applied to the part on a label in the form of a bar code. Another possible method is to use RFID technology – although to date this identification method has failed to break through into mainstream application. A key reason for this is most likely the high price compared to printed labels.
In some cases, direct identification on the individual workpieces is dispensed with, and instead the workpieces are “electronically” tracked through the production. For this method to work, it must be assumed that the sequence of workpieces does not change from one machine to the next. On the basis of this sequence, every machine is informed which workpiece is coming next. However, this calls for a high level of discipline across the whole of the production process, as any manual intervention must be correctly logged with 100% certainty.

Integral production – integral machine operation
The user interface has a decisive role to play when it comes to the productivity of a machine or production cell. Here too, the HOMAG Group has made enormous strides over the past two years. The standardized powerTouch machine operating and control system makes for greater user simplicity and efficiency. Using the large multi-touch monitor, machine functions can be controlled by direct touch in the same way as a modern smartphone. Standard operating elements with the same look and feel ensure that operators are familiar with the controls of all HOMAG Group machines. Thanks to the use of modern software modules, the relevant machine status information is available at a glance. At the same time, integrated help and assistance systems provide operator support in the event of an error, quickly and clearly indicating the cause of the problem and guiding users towards implementing a remedy.

Manufacturing Execution System for safety and transparency
Manufacturing execution software is often used to help maintain an overview over the production process and to deliver the relevant data at the right time to the connected machines. This system receives the data for the required components from the upstream production planning system and then ensures that all necessary workpieces are placed ready for further processing in the correct sequence at the end of the production process. Any necessary reworking of defective workpieces can also be dealt with by the manufacturing execution software, which also feeds back required status information on the individual components to the production planning system.

The more customer-specific the products, the more necessary it is to move away from the purely manual input of data in the production engineering department. A CAD/CAM system can provide key support here. This applies in particular where data from the point of sale has to be directly further processed.

Industry 4.0 – Practical application in the woodworking industry
For all of these processes, the HOMAG Group supplies the components from a single source: Both the machines with their highly developed control systems and the relevant software, from production engineering through to the sales process. An array of installations in daily operation the world over testifies to wide-ranging success and extensive benefits for the furniture industry as a whole.

By implementing “networked production”, the HOMAG Group is already fulfilling many of the aspects of the “Future Project Industry 4.0”, and is also heavily involved in a number of joint research projects. Overall, the furniture industry may claim to be further advanced in some areas in the implementation of Industry 4.0 than sectors such as the metalworking industry. One area where this applies particularly is in the field of batch size 1 production.

But despite these successes, there is no denying that networked production, and in the future Industry 4.0, poses whole new challenges to industry. The most serious of these is the issue of data security. Greater attention must be paid to this aspect, both on the part of machine manufacturers and software suppliers, and also by machine and plant operators. The HOMAG Group has always attached particular importance to the issue of security, where it has been a central concern in areas such as teleservicing. This is also a focal theme of the HOMAG Group’s in-depth involvement within the framework of the Industry 4.0 project. 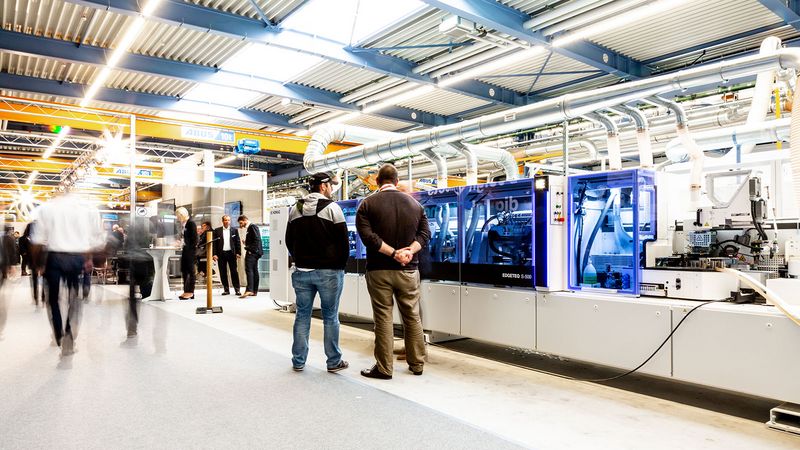