Intelligent solutions for all cutting applications

The future of panel dividing begins at the LIGNA trade fair in Hanover from May 22 to 26. This is because at LIGNA, the world's leading trade fair for the wood industry, the HOMAG panel dividing experts from Holzbronn are demonstrating numerous innovations that all have one thing in common: they guide the saw operator through the cutting process with a greater degree of safety than ever before, reacting to the operator's actions and thus increasing overall efficiency in the production process. The innovative solutions are being demonstrated live every day in HOMAG City in Halls 14 and 13. 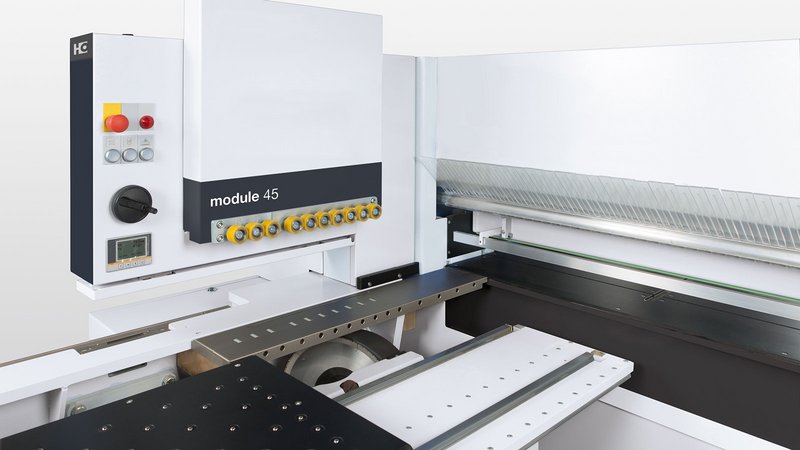 What was presented at LIGNA 2015 as a conceptual study becomes reality: intelliGuide professional assists machine operators in performing their daily work on the saw by means of a laser and an assistance graphic.

The HPS 320 flexTec saw was the biggest surprise at LIGNA 2015. It revolutionized cutting in industrial batch size 1 production.

Ideal for the trade: with the new module45, bevel cuts can now be executed on the HOMAG panel dividing saw — easily, quickly, and cost-effectively.

At LIGNA, the HOMAG innovations in cutting represent nothing less than a change in perspective. This is because all the innovations focus more strongly than ever on the machine operator. The aim is to make it easier for the operator to switch back and forth between processing stations during production as well as to allow them to spend less time on the machines. Humans and machines should no longer get in each other's way, therefore errors will be reduced.

"These objectives require us to change our way of thinking during the development process," says Wolfgang Augsten, head of the Business Unit Panel Dividing. As he explains, "Up until now, the saw determined the production sequence, expecting certain actions from the machine operator. We want to reverse this relationship. We want our cutting solutions to react intelligently to the operator and guide them through processing in an optimal way. Our LIGNA innovations already embody this approach. In my opinion, with these innovations, we are already setting a milestone in the history of panel dividing saws and redefining the human-machine interaction." An example of this is the fundamentally revised CADmatic machine control unit, which is more strongly oriented on the behavior of the user than ever before.

CADmatic 5 – the new generation of the machine control unit

Easy, efficient, intelligent – this was the brief for the CADmatic 5. The latest version of the control unit software from Holzbronn meets this brief in every respect, beginning with the diversity of its versions. With effect from the start of LIGNA, the software will no longer be available in the BASIC, PRACTIVE, and PROFESSIONAL versions; instead, there will be only one CADmatic 5 for all saws from the 3 series upwards.

In particular, an innovative assistance graphic will guide the machine operator through all input and processing steps. This graphic will not only show the operator what the machine is currently doing; they will also see what work step comes next and exactly what they are required to do. A color-coded guidance system provides orientation.

Controlling the machine via the keyboard and the mouse becomes a thing of the past. The user navigates and makes most entries intuitively by touching and swiping the screen. The screen itself provides visual feedback and shows what effect the entries made have. Machine control has never been this easy, selfexplanatory, and ergonomic.

CADmatic 5 is just the beginning – the evolution of assistance systems is already going far beyond. Hence, at LIGNA 2017, the HOMAG panel dividing experts will also present a revolutionary modular solution called intelliGuide." Some people will already be familiar with the basic version of this innovation from the in-house trade fair in autumn 2016, where it was presented under the name "Operator assistance system LED." As of right now, the solution is called intelliGuide basic and no longer shows the next processing step on the screen alone, but also directly at the cutting line with the help of an LED strip.

For LIGNA, there will be two further stages of expansion that will make the system even more intelligent and powerful: intelliGuide advanced and intelliGuide professional. In both expansion versions, the saw is also fitted with a camera system. The recordings from this camera system are evaluated in real time by image processing software. intelliGuide thus has "eyes" and sees which part the saw operator is moving and how they are moving it. This means that for the first time in the history of panel dividing saws, the machine can react to the operator and not the other way around. intelliGuide does exactly this, always showing the next step via CADmatic or LED and guiding the machine operator.

The top version intelliGuide professional does this even more conveniently, safely, and ergonomically. In this expansion stage, a laser projection system is also installed. It projects handling instructions in the form of symbols directly onto the parts being processed. Example: If the machine operator puts a part down in the wrong position, the laser projects an arrow symbol onto the part, thereby showing the required direction of rotation. The machine operator knows immediately what they have to do, without having to look at the screen.

Welcome to the future!

The HOMAG panel dividing experts have successfully paved the way to the future with the new CADmatic 5 machine control unit and the intelliGuide assistance system. Where will this path lead and what opportunities will it open up? Interested visitors will find answers to these questions at LIGNA 2017. On request, the saw manufacturer will show two conceptual studies that give an insight into the future of panel dividing technology and illustrate how digitization could fundamentally change machine operation. Keyword: Industry 4.0. Both conceptual studies represent actual development projects. They describe technology ideas that have great market potential and could make day-to-day work much easier – both in industrial production and smaller businesses. (Hall 14 Software Area, Hall 14 Innovation Center.)

The HPS 320 flexTec will also be a subject of attention once again. This awardwinning cutting cell is revolutionizing batch size 1 production and captivated countless visitors at LIGNA 2015. In 2017, the HPS 320 flexTec will be on show once more and will open up new opportunities for potential users from trade and industry. The robot cell is now available as both a stand-alone solution and with a high level of interlinking, enabling fully automated operation along the line.

This is guaranteed by the newly developed algorithm for the destacking software. Using this software, the robot buffers selected parts independently and creates stacks that are absolutely stable as well as optimized for subsequent stations. To enable customers from trade and industry to take full advantage of this potential, the HPS 320 flexTec is now available immediately with the following options: an automatic outfeed via roller conveyors, lifting table constellations for automatic destacking in the field of action of the robot, or with combinations of roller conveyors and lifting tables. This diversity of solutions opens up a host of new possibilities and makes HPS 320 flexTec even more appealing for batch size 1 production on a large scale.

With the HPP 300 multiTec, the machine manufacturers from Holzbronn have, for the first time, developed a saw that can also drill and rout in a single pass. This hardware innovation was first launched at LIGNA 2015. Now it's time for the next step: the intelligent and highly efficient software connection to COBUS NCAD via an interface. This will allow timber manufacturers and builders of partition walls to work faster with more flexibility than ever before. The users plan their project jointly with the customer as usual using their CAD/CAM software. At the push of a button, COBUS NCAD generates machine-readable production data from these plans and transfers it to the Cut Rite optimization software. The optimized data goes from there directly to the saw. If multiple machines are being used, such as a storage system and a beam processing system from WEINMANN, or a HOMAG nesting machine, COBUS NCAD makes an independent decision based on configurable parameters regarding which component is produced on which machine.

The result: ideal, streamlined, and highly efficient processes that can be used in the planning phase to implement even the most spontaneous of the customer's wishes in a flash. This solution will be demonstrated in Hall 13 by WEINMANN, the HOMAG Group specialist for timber house construction.

What else will the HOMAG panel dividing specialists present in Hall 14? There will also be a HPP 130 in combination with the new module45. This innovation proves that a whole is more than just the sum of its parts. With module45, users can complete bevel cuts and other cuts on the same single saw without changing stations, with a high level of efficiency and flexibility as well as precise bevel cuts in infinitely variable angles from 0 to 46 degrees.

YOUR SOLUTION for wood processing at the LIGNA 2017