HOLZMA offers a special recut option specifically for industrial batch size 1 manufacturing: combiTec. It available for the HKL 300 profiLine angular saw. This innovation carries out the better part of all recuts in a fully-automated process, saving considerable time and money. 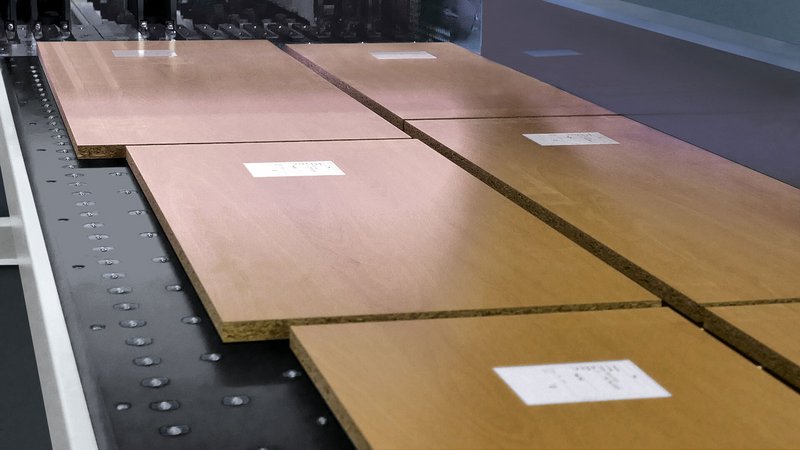 Fully automated processing of recuts has been possible on the HKL 300 combiLine angular system for some time – thanks to a trimming unit integrated in the rip saw. What's new is that recuts can now be dealt with in one cycle without a trimming unit. This reduces not only investment costs but also operational and tool costs. "In comparison to other solutions, we are far cheaper with this system. And we can reduce waste rates still futher by using a thin saw blade," confirms Volker Kussmaul, Head of Sales Systems + Production Lines at HOLZMA.

Already proving a success in practice
The process works simply and reliably: the rip saw no longer deals just with rip cuts, but also, as needed, with recuts – using one and the same saw blade This is achieved in the following way. Where recuts are required, the panel is not cut along the entire length, but only to up to a defined point. The downstream cross-cut saw completes the cross cuts in the usual way, making two cross cuts where the recut was before effected. As far as possible, the software positions waste parts exactly in these positions in the cutting pattern. This additionally saves time and money. "This new system is already working very successfully for our first customers," states Volker Kussmaul and continues: "Practice has impressively confirmed the potential of this solution."

The new recut feature combiTec is available for the HKL 300 profiLine. This angular saw offers a saw blade projection of up to 95 mm, allowing it to cut with ease both batch size 1 and small series, in multi-shift operation if desired.

The technology
The new combiTec system necessitated further development of a number of machine components and also of the software, namely the HOLZMA machine control CADmatic and the optimization software Cut Rite.
In order to achieve fully automatic recuts using the saw blade, HOLZMA has, for example, equipped the angular saw with special measuring and positioning systems. The reasons for this are that, for recuts, the panel must be positioned with great precision, especially at the rip saw, and furthermore that the saw carriage must allow the saw blade to be raised or lowered at precisely the correct position. The integrated technology ensures that this is the case, thus providing the accuracy typical of HOLZMA machines.

More features for still higher performance
In addition to the "recuts" option, HOLZMA recommends the saw be equipped with other proven features such as the HOLZMA Power Concept, which increases the output of the cross-cut saw, and the Speed package, which allows greater speed throughout the entire process. Equipping the saw with an automatic waste removal system is particularly recommended, because this then allows trim and waste parts to fall directly, via flaps, onto a removal belt that transports them to a waste chopper or grinder.

Efficient and fast
HOLZMA is primarily targeting the new HKL 300 combiTec at industrial enterprises that produce small batches or even in batch size 1. However, centers providing cutting services also benefit from the new system. It offers flexibility in production and helps reduce storage area and stocks. It also offers speed and efficiency – HOLZMA is confident that the system offers one of the most powerful units in the batch-size-1 sector. On the one hand, because manual recuts are usually no longer necessary, which saves a lot of time and extra work steps, and on the other, because the Power Concept offers a huge reduction in cycle times.

One saw – many benefits
The HKL 300 profiLine with combiTec option produces small batches, or batches of just 1 piece, on demand and with virtually no restrictions on the choice of cutting patterns. Even complex patterns are possible because the saw deals with nearly all the recuts automatically during the regular cutting process. This speeds up production and additionally reduces the number of manual work steps. This results in shorter production times and a clear downward trend in the costs per part.

Focus on the core competency of HOLZMA
The new combiTec solution allows HOLZMA to focus on its core competency – sawing. The advantage: customers are able to benefit from mature, sophisticated technology and maximum reliability in terms of performance, precision and efficiency.