HOLZMA introduced the Power Concept in 2007. An independently maneuverable clamp allows several strips with different cross cuts to be cut to length together. For strips with the same cross cuts, the Power Concept can connect to the main program fence using a locking device. Using the Power Concept significantly increases material throughput. To date HOLZMA has sold more than 350 saws with this technology worldwide – and more are being sold every day. 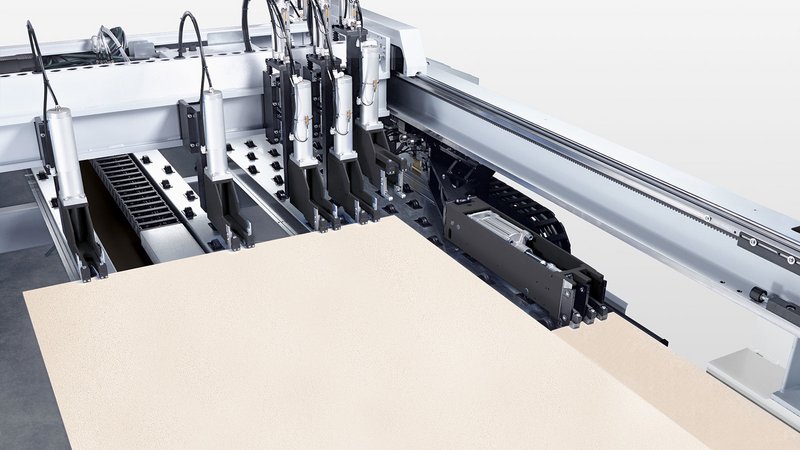 HOLZMA Product Manager, Martin Kress, sums up the reason for this success: "From a technical perspective, the industry had long been driven by one goal only: speed, speed, speed. Attempts to increase material throughput had been based exclusively on higher speeds – almost like trying to speed up traffic by producing faster cars. With the Power Concept, we decided to take a different path, aiming for continuous sequences and smooth machining processes."

Achieving this goal does not only depend on the saw's processes, but also on how parts progress before and after the saw and how parts are transferred to the subsequent processing stations. The Power Concept alone cannot achieve the desired results – if the machine operator doesn't clear the air table area in time, the saw has to wait until he has done so. For this reason, HOLZMA developed the Domino System – a modular system with technologies, which can be individually configured for all aspects of the cutting process. As such, the Power Concept is embedded in a requirements-based complete system, which ensures smooth, flowing processes – from the best feeding solution in each case to the identification of parts, for example by means of automatic labeling near the pressure beam, right through to destacking with the help of the intelligent destacking display.

These technologies alongside other targeted Domino technologies help to optimize the added value in production and to prevent errors. Work on the saw is significantly more efficient, because non-value-adding activities are largely eliminated. Even the increased saw output provided by the Power Concept can be easily managed by just one operator. Clients save a lot of time, reduce their production costs and increase their competitiveness.

"Establishing new ideas on the market," concludes Martin Kress, "usually takes time. With the Power Concept combined with the Domino System, this has been anything but the case. The sales department and our clients immediately understood that smooth, continuous processes are key to remaining competitive in the future. This is true for smaller companies as well as for the industry." The Power Concept is now available for the majority of HOLZMA saws, with the exception of Optimat models.