Errors often occur during the prefabrication of elements that have to be eliminated by time-consuming rework at the construction site. 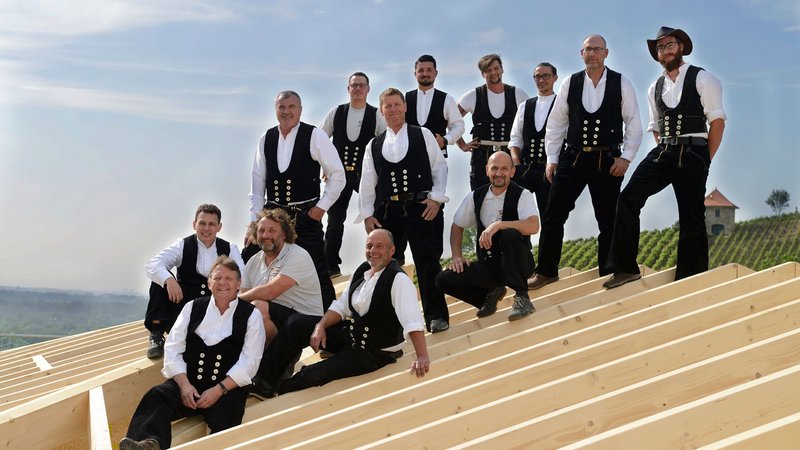 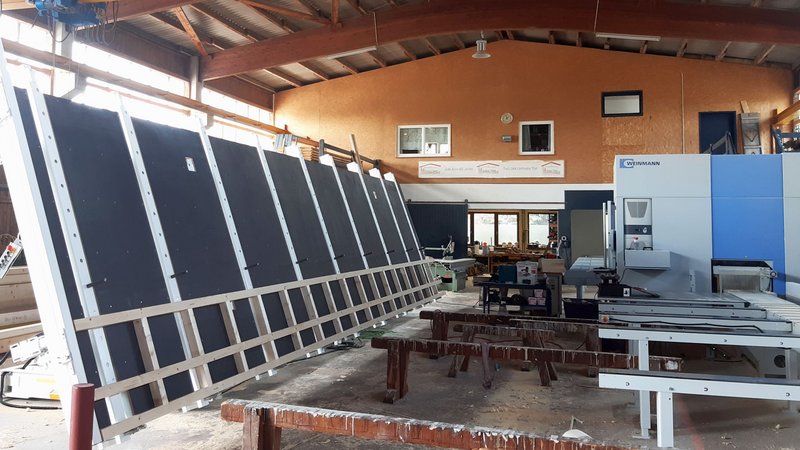 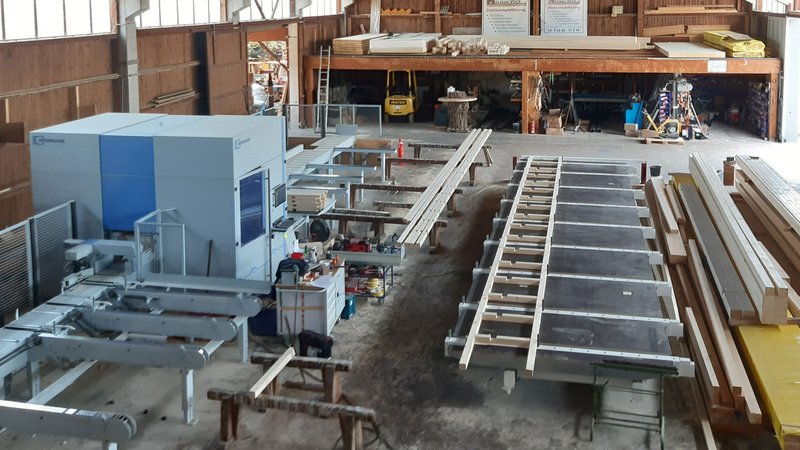 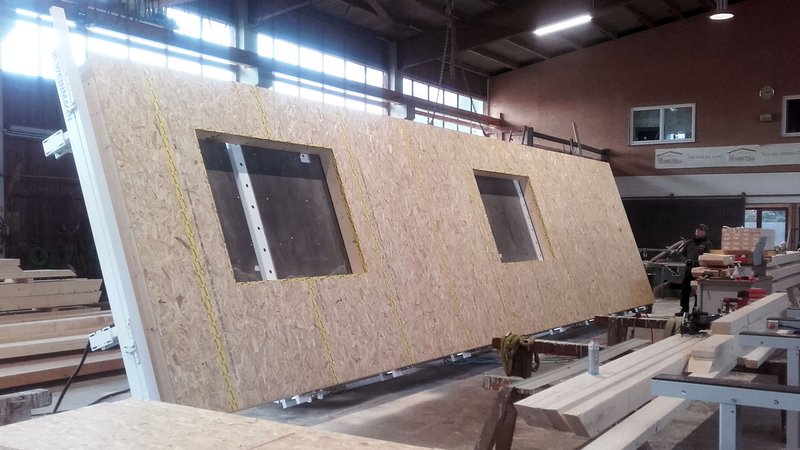 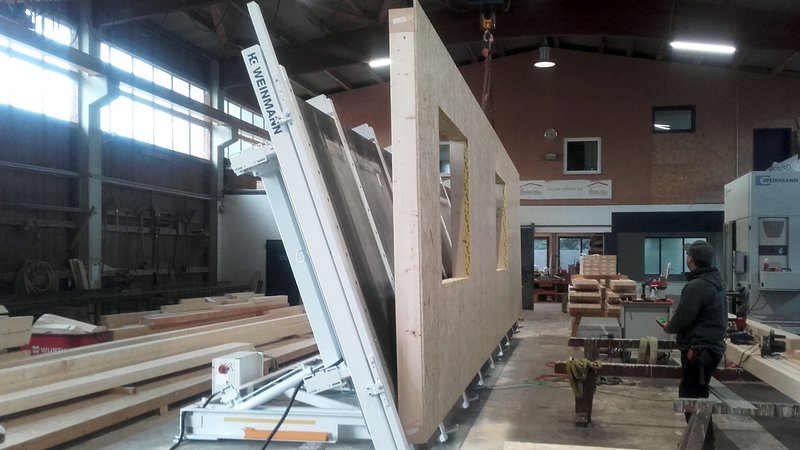 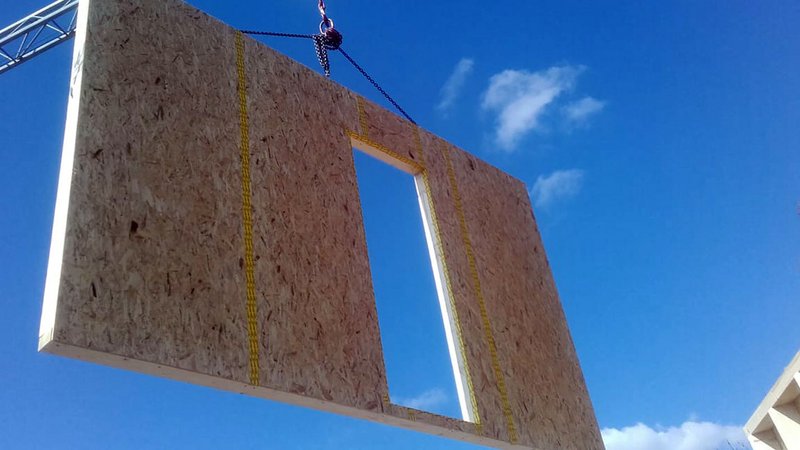 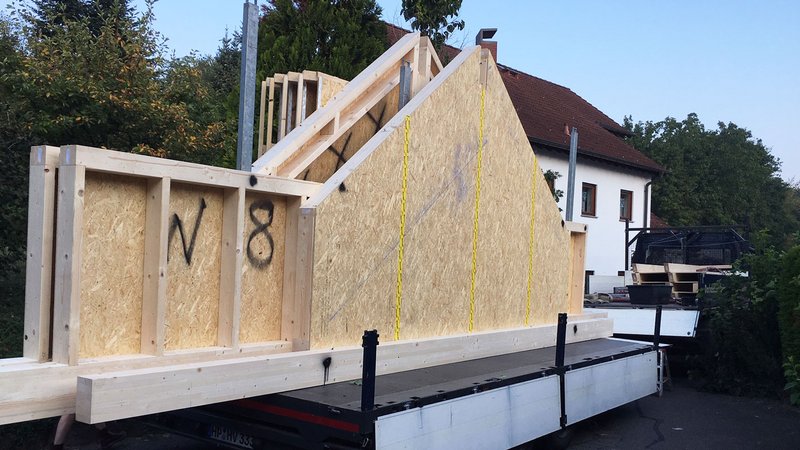 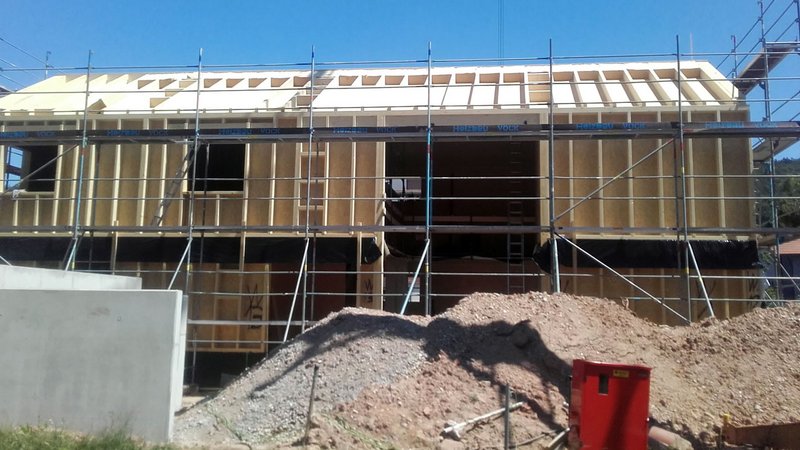 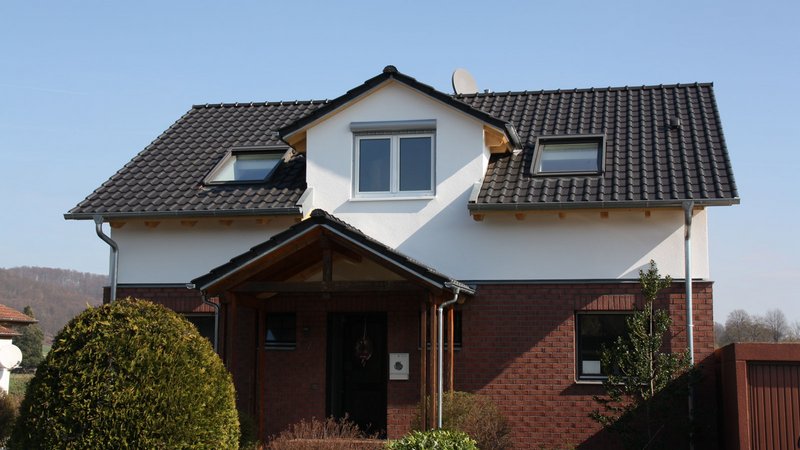 The employees of the Vock carpentry are very proud of their new produktionhall.

All joinery work as well as the elementation are done at the new production hall.

The new carpenter table is the perfect complement to the already existing joinery machine.

After the elements are tilited upwards they can be moved through the production hall without the risk of damaging the element.

The carpenter's table allows an easy tilting if the elements.

The prefabricated elements arriving at the construction side.

Roof extensions and energetic roof renovations are issues Holzbau Vock is dealing with every day.

Vock manufactures wall and gable elements as well as roof and ceiling elements.

"Now it only takes one person to process beams and prefabricate elements."

An article of the dach+holzbau magazine, issue 04/20. Click here to find the whole magazine

Energy-related roof renovations and additional stories in wood frame construction are part of the day-to-day routine for the carpentry business Holzbau Vock. While beams are processed automatically, until recently, the elements were produced using a work table produced in-house. However, there were some sources of errors that Holzbau Vock wanted to eliminate.

Due to the soft design of the table, aligning the elements at a 90° angle was very time-consuming, particularly if the wood had become warped. Clamping was also a very inefficient process, as it was only possible with cumbersome auxiliary equipment such as collet chucks. Another process that repeatedly caused Holzbau Vock problems was setting up and turning elements using an overhead crane. The risk of damage is particularly high for elements with panel overhang, and there are also frequent accidents when the overhead crane is used to deposit the elements as the elements slip away. Stefan Vock, Junior Manager at Holzbau Vock, was therefore looking for a suitable system to optimize the company's work process. With the BUILDTEQ A-530 carpentry table from WEINMANN, he found exactly the solution he was looking for. "The solid steel table ensures that the angles are accurate, enables pneumatic clamping and sets the elements up securely. It's exactly what we were missing," says Stefan Vock.

The carpentry table has been in use at Holzbau Vock since November 2019, and the work process is now much easier and faster. All beam processing and element production takes place in the 800 m² hall. The carpentry table is located opposite the BEAMTEQ B-560 beam processing machine. Processed beams, plates and studs are placed directly on the assembly table by the outfeed of the beam processing machine. Initially, the beams and plates are aligned at the stops. The studs are then inserted at the respective positions. For Stefan Vock, this is where the good interaction between the beam processing machine and the carpentry table is also evident, because Holzbau Vock works with grain-cuts. These are produced with the beam processing machine and they define the positions of the individual studs. The studs and plates are then clamped and pressed together so that they can be nailed together. Stefan Vock: "We insert the stud at the trimmed point and clamp it, so the stud is always inserted correctly." The finished frame work is sheathed with a panel made from wood material and positioned upright using the hydraulic tilt function of the carpentry table. The overhead crane picks up the elements, which are sheathed on one side, turns them, and then places them back on the table. Using the work table to turn the elements helps to lower the risk of accidents and increases work safety. The table lowers so that the insulation and installations can be inserted and the second side of the element can be sheathed. After completion, the table places the element upright again so that it can be picked up by the overhead crane and buffered on the trailer. There is no damage to the element, even when there are panel overhangs.

Stefan Vock and his employees are impressed by how much simpler their daily work is: "We save valuable time during element production. The elements can be clamped more quickly and more easily, and time-consuming work such as long-winded alignment or clamping with collet chucks is no longer necessary." The fact that the elements have much more accurate dimensions is also clear at the construction site. "When we place two walls next to each other at the construction site, they are automatically aligned correctly and in the correct position. With the carpentry table, we get a perfect element with precisely accurate angles." Time-consuming rework at the construction site is no longer necessary and assembly is quick and smooth. The work processes are easier, aids and detours are no longer necessary, and the result is better. "Our employees also enjoy their work much more again now," reports Stefan Vock. Employee motivation was one of his concerns with regard to the investment, as was the case with the beam processing system. "Working with the table is perfect and it's a big help to us. And with the combination of the beam processing machine and the carpentry table, we are now much more flexible. Now it only takes one person to process beams and prefabricate elements."

Holzbau Vock uses the carpentry table for more than just producing wall elements. They also use it to manufacture elements such as dormer brackets, which are most often required when adding stories to existing buildings. As the carpentry table has two clamping circuits, both dormer brackets can be clamped and manufactured simultaneously. In the future, Holzbau Vock also wants to produce roof and ceiling elements on the assembly table. There is also the option to add an extra multifunction bridge — this was an important factor in the investment for Stefan Vock, as the company is set to expand further in future. Thanks to the carpentry table, Holzbau Vock has created a good basis for this further development.

Founded in 1945 in Heppenheim, Germany, as a carpentry business, this was the main area of activity until 1998. Today, a large majority of the company's activities are taken up with energy-related roof renovations and adding additional stories to existing buildings.