Modern technologies enable the automated production process in a factory hall. All elements can be manufactured off site so that just the erection process has to take place on site. The advantages of off-site manufacturing are obvious: All processes off-s 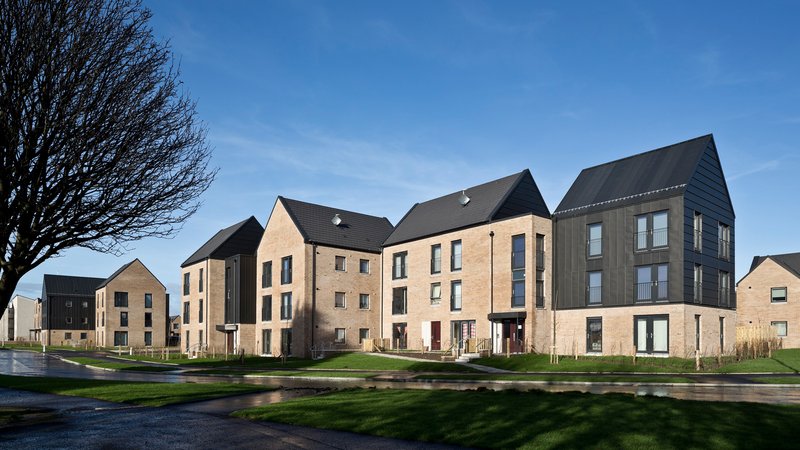 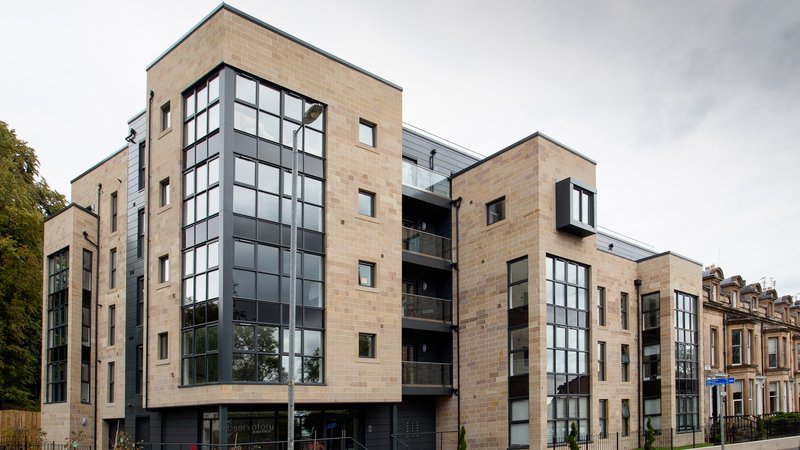 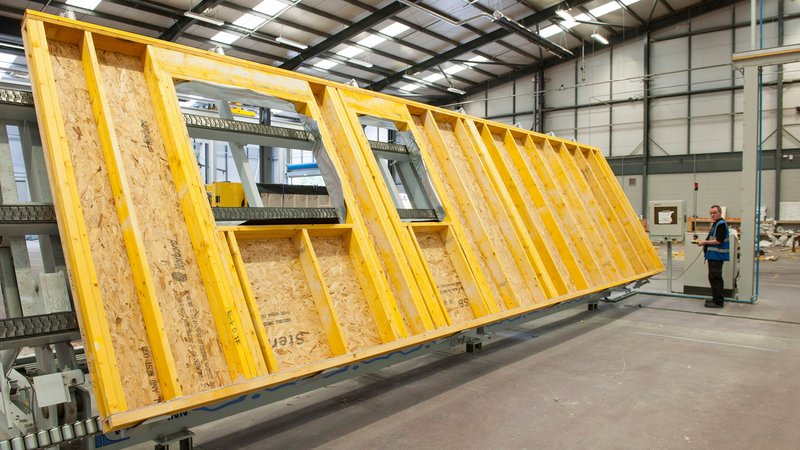 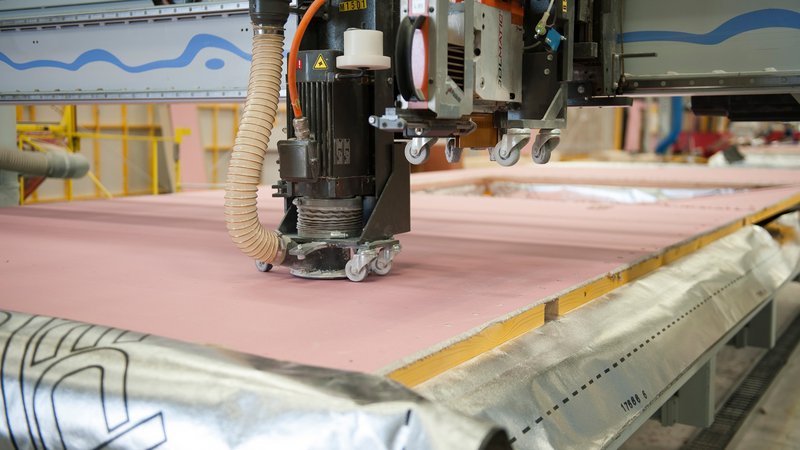 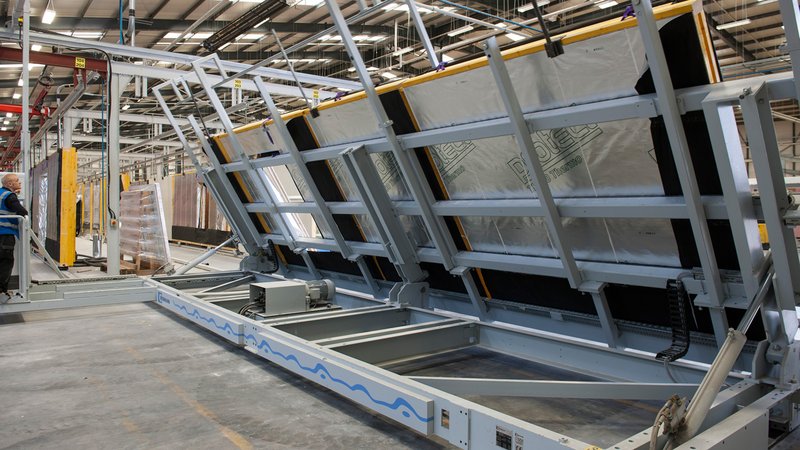 Also the observatory was built with the highest degree of prefabrication

The butterfly turning table turns the element, so that the second side can be processed

The tilting table transports the element to the storage

"The off-site manufacturing also makes the planning much easier because of a greater certainty and predictability. All this factors lead to an improved value for money."

Due to the fact that it is hard to find skilled employees, and also the labour costs are high, this is an important factor which allows special facilities for the construction companies. The off-site manufacturing also makes the planning much easier because of a greater certainty and predictability. All this factors lead to an improved value for money.

One of the companies who have seen the opportunities of prefabrication and took the strategic decision to move into timber frame construction was the company CCG (Scotland) Ltd. CCG is one of the main producers of timber frame constructions in the United Kingdom and has a fully integrated Group structure spread across 8 divisions. One of these divisions is CCG OSM that is responsible for the off-site manufacturing. CCG OSM is operational in many sectors across the industry manufacturing open and closed panel kits for both CCG (Scotland) Ltd and external clients. The kits are being used on projects in the educational, student housing, private and social housing and care sectors. In this sector, they employ 80 people including office based staff and labourers spread across a double shift pattern.

Chris Murray, marketing manager of CCG OSM tells us about the reasons for the decision to move into the off-site manufacturing. Off-site manufacturing allows CCG to approach any project with confidence that they can deliver low carbon buildings to exacting specification, offering their clients complete flexibility.

Also being able to deliver buildings in this way allows CCG OSM to fulfil their aspirations of being a contractor that is leading the way in energy standards - a big advantage when taking into account building regulations changes for the UK marketplace this year. The advantages from off-site manufacturing are felt in production and on the site.

To implement the decision to move into timber frame construction, CCG decided to invest in an automated production line. WEINMANN was the obvious choice for CCG to move forward because the WEINMANN line allows them to produce buildings to the highest quality, maintaining sustainability in areas of cost and environmental management. The production line consists of a WBS saw, aframing station, a multifunction bridge, several assembly tables and a distribution trolley. Also a panel saw of HOLZMA is used in the production. WEINMANN and HOLZMA are both part of the HOMAG Group.

The production starts with the high speed linear saw machine WBS which cuts and processes the required truss parts and wall panel components. Parallel to this process, the HOLZMA panel saw cuts the sheathing. The next step in the process is performed by the framing station WEM which manufactures the complete frame work semi-automatically. The finished frame work is transported to the end of the out feed table and passed to the next working table for the subsequent step. Now the sheathing is positioned on the frame work and fastened and processed automatically by the multifunction bridge. The element is automatically turned by the so-called butterfly turning table which consists of two assembly tables. Here insulation is placed into the frame and further sheathing closes the panel. Depending on the final design of the houses, the panel receives further layers. This leads into nearly completed panels apart from the final outside finish. The multifunction bridge fastens and processes the element layer by layer. The finished elements can be stored in a vertical storage. For the commissioning of panels inside the storage as well as for the loading of the trucks, the distribution trolley can be used.

This production line allows CCG to manufacture and construct effectively at speed meaning further cost savings are made at site level – these are all aspects that help in obtaining and retaining clients.

Chris also tells us that they can look at a broader range of projects and sectors with the production line. This is really important for CCG OSM because of the fragility of the Scottish housing market.

To guarantee that the production line met CCGs requirements and is highly flexible, WEINMANN and CCG OSM worked really close together. The flexibility is shown in the possibility to produce open elements as well as closed elements. Furthermore, not only wall elements but also roof and ceiling elements can be produced.

This was an important point for CCG because they want to be able to provide their customers with the complete package. Now they can provide a full suite of products for the projects of CCG (Scotland) Ltd as well as for external clients, offering complete flexibility in the choice of specification.

Upon establishing the 4 stage production line in the year 2010 the UK was in the grasp of its worst financial crisis in decades. CCG (Scotland) Ltd took a brave decision to privately invest in the OSM facility. Chris Murray, marketing manager of CCG: “We are confident in saying that the production line offered by WEINMANN has helped CCG to remain competitive and, more importantly, remain profitable. Our expectations about how well the machinery would perform have been met, and we now look forward to utilizing the WEINMANN line to help CCG OSM reach new heights in the construction industry”.

The manufacturing process has become more efficient through the higher degree of automation. The efficiency of the line can be measured in many different ways but none more so than project delivery. CCG deployed CCG OSM for one of Scotland’s leading housing project – the Athletes’ Village. The project was undertaken by a consortium of 4 companies, City legacy, for the 2014 Commonwealth Games. CCG OSM helped deliver 237 of the 700 homes for the project, delivering them with a 7 month advance on the contract delivery date – this was a great advantage as the completion date for the project was immoveable. This is a great example of CCG OSM’s efficiency which could not have been achieved without the WEINMANN production line.

But also the consistency in quality is an important point as this links so many different areas in the manufacturing process including cost. The production line operates at an increased speed to traditional building methods – therefore assisting with cost savings within the factory as well as the decreased amount of time spent on site. This aspect also assists with a decreased amount of money needed for damages as well as labor and logistic costs. Chris Murray: “Overall, CCG OSM and the use of WEINMANN, has proved to be a cost effective partnership in many different areas”.

The quality standards achieved by CCG OSM have always been high. However, over the number of years of using the WEINMANN production line CCG OSM has been able to assess where they needed to improve to remain as efficient as possible. This self-assessment has allowed CCG OSM to continually manufacture buildings to an industry-leading standard.

Besides that the production line offers a healthy and safe working environment. The automatic handling systems reduce the manual handling and reduce the workload for the staff. Also all machines have a good protection of noise and dust.

These factors alongside the speed of delivery allow CCG OSM to compete at the highest level and lead the Scottish marketplace. This would not have been achieved without the machinery provided by WEINMANN and the HOMAG Group.

CCG is one of the main producers of timber frame constructions in the United Kingdom and has a fully integrated Group structure spread across 8 divisions. CCG OSM manufactures open and closed panel kits for public projects as well as private and social housing.

In the fast lane - Polish prefab manufacturer takes off

We spoke with Mr. Antoni Zin, production manager of the largest prefabricated house manufacturer in Poland.…

For companies, operating in Europe in the field industrial building and commercial building, or builders of…