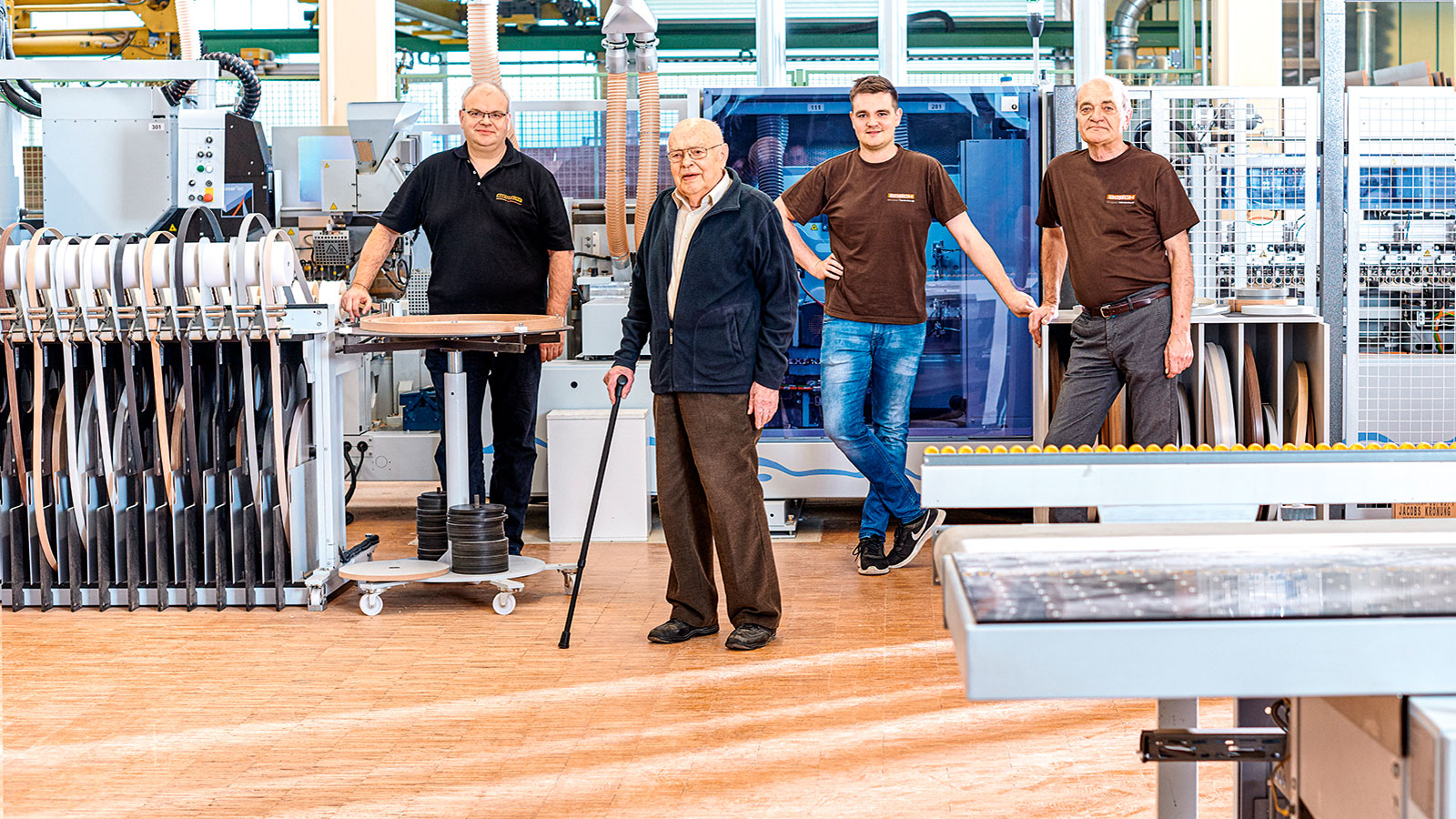 Short delivery times, absolute flexibility and a high standard of quality within the company have made Walter Bosch GmbH what it is today. 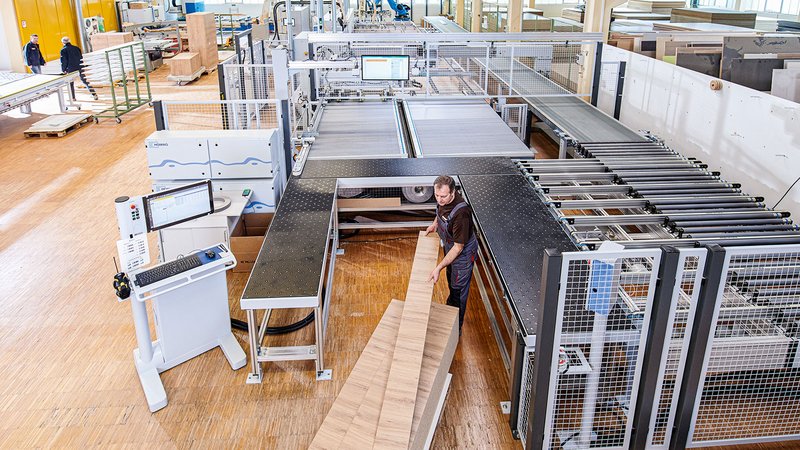 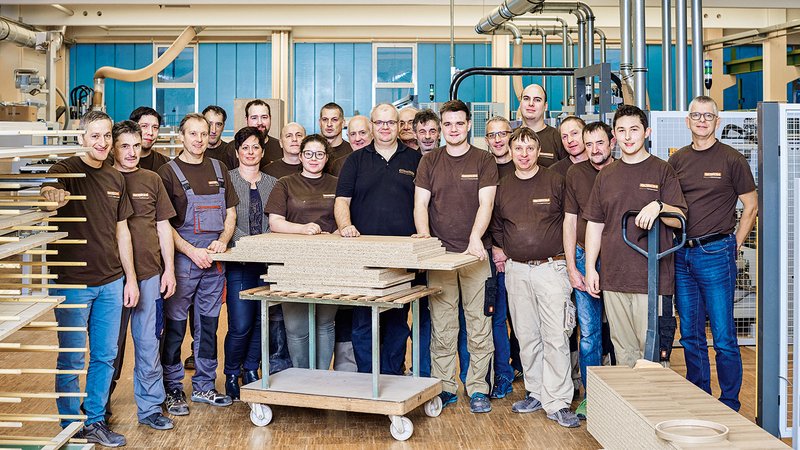 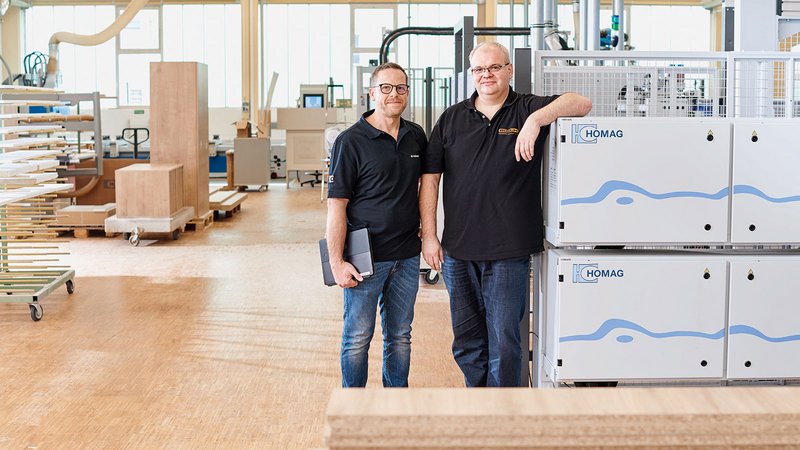 The team at Walter Bosch GmbH.

Across the Jagst and across the Atlantic.

In 1954, Walter Bosch founds a joinery, specializing in the classic fields of furniture and windows. Nine years later, the focus moves toward the finance industry. For decades, the business primarily supplies complete fixtures and interior fittings for banks. Walter Bosch grows together with the financial institutions and HOMAG. Then comes the banking crisis — and consequently, specialization in hotel and commercial property fittings. In 2002, Norbert Bosch takes over the management of the business. Today, as a second line, the company also produces individual parts: for the furniture industry, as well as for colleagues from the joinery trade. The company supplies parts from the Baltic to Milan, from Zurich to the Polish border. And there's something that makes them particularly proud: "We have even supplied parts to the USA," says Johannes Käser, foreman in the work preparation area. Norbert Bosch now employees 30 employees, 25 of whom work in the highly modern production department, with a machine pool that is certainly not typical for carpenters but that is essential for Norbert Bosch. Ultimately, he would prefer to manufacture everything in-house so that the company can always meet its own quality demands and thus satisfy every customer. Therefore it is only logical that even the saw blades themselves are honed in Rühlingstetten — on weekends, on the CNC machine purchased especially for that purpose.

It all started with the edge.

In 1964, edge banding machine number 6 from HOMAG laid the foundation for later success. "At the trade fair in Hanover, my father purchased one of the first edge banding machines presented by Mr. Hornberger. Back then, everyone thought he was mad," explains Norbert Bosch laughing. Fifty-six years later, production uses exclusively HOMAG machines: from the saw, through the CNC to the edge banding. At the core is a KFL 610 profiLine (now: EDGETEQ S-800) with robot return. When asked if the machine isn't a little too large for the joinery business, Norbert Bosch simply answers "I'm just mad about technology — but you have to be."

However, it is not simply the technology in the machines that is important to the master joiner: service is the top priority. Not least the years of personal contact and the close proximity to Schopfloch have made the business relationship something more: "Now, it's more than a partnership; a friendship has developed," says Bosch.

The craft is changing.

In 2010, Norbert Bosch decided on digital production. "Something new isn't necessarily bad — the new ServiceBoard is fabulous, for example. I think that the entire system has to keep on growing and developing further, otherwise the company will not grow." The decision was settled with the introduction of the ControllerMES production control system from HOMAG. The objective: elevating production, which is already very modern, to a new level in terms of capacity and quality — but without overtime. "Employees must not fall by the wayside despite the digitalization. We don't want to replace anybody. If the machine can do something better, then our employees have more time for things that a machine can't do." However, the increasing networking has more than just an economic aspect: Norbert Bosch wants to inspire young people for joinery via digital topics, because the prevailing lack of skilled workers doesn't stop when it reaches Middle Franconia.

The master joiner has achieved a lot but wants to do even more: "Standing still is a step backward and we are always looking forward. The next projects that we want to realize together with HOMAG are already in the pipeline." Norbert Bosch's son Patrick is naturally happy about that. As a newly qualified master joiner he is working in the family business and at some point, will continue what his grandfather started.

Advantage through size is the motto of the SAWTEQ B-500 – an innovative, robust high-performance saw for mass producers.

Drilling and doweling – and always keeping a tight grip on everything.

We are always on the pulse.

Eighteen members of staff, 11 of whom work in production, use a range of HOMAG machines that you'd be highly…